Read The Stranger You Know Online

The Stranger You Know 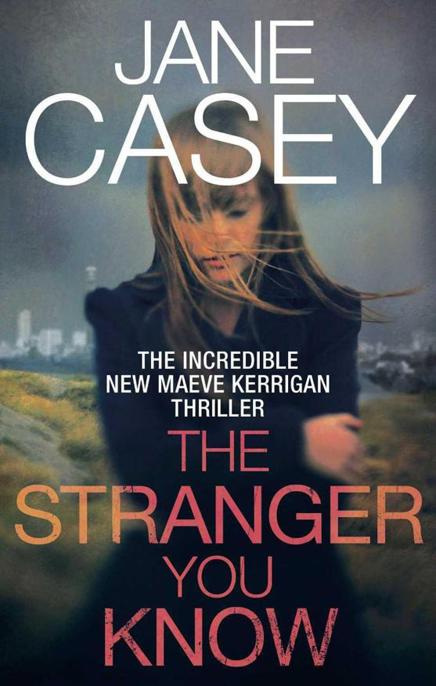 Maeve Kerrigan is hunting the killer who strangled three women in their own homes. With no sign of a break-in, every indication hows that they let him in.

Maeve refuses to believe he could be involved, but how well does she really know him? Because this isn’t the first time Derwent’s been accused of murder…

THE
STRANGER
YOU
KNOW

Published in 2013 by Ebury Press, an imprint of Ebury Publishing
A Random House Group Company

Jane Casey has asserted her right to be identified as the author of this Work in accordance with the Copyright, Designs and Patents Act 1988

This novel is a work of fiction. Names and characters are the product of the author’s imagination and any resemblance to actual persons, living or dead, is entirely coincidental

All rights reserved. No part of this publication may be reproduced, stored in a retrieval system, or transmitted in any form or by any means, electronic, mechanical, photocopying, recording or otherwise, without the prior permission of the copyright owner

Addresses for companies within the Random House Group can be found at:
www.randomhouse.co.uk

To buy books by your favourite authors and register for offers visit:
www.randomhouse.co.uk

Some flying from the thing they feared, and some

Seeking the object of another’s fear …

… And others mournfully within the gloom

Of their own shadow walked, and called it death …

The garden was quiet, the air still. As still as the girl who lay under the tree.

Her eyes were closed. Her hands lay by her sides, palms up. Her hair spread across the grass like yellow silk. And the flowers under her were like the stars above her.

He put out his hand and felt the heat radiating from her skin, even now. Even in the moonlight he could see the blood on her face, and the bruises around her neck, and the way her eyelids sagged, empty. Her eyes – her forget-me-not blue eyes – were gone. Her lip was split. Her face was swollen.

He could touch her. He reached out, but stopped himself.

He could never touch her again.

His breath came faster. He wanted to touch himself but he couldn’t do that either. Not here.

He almost thought she smiled.

I’d seen enough dead bodies to know they can look peaceful. Calm, even. At rest.

Princess Gordon was not that sort of corpse.

It wasn’t her fault. Anyone would have struggled to look serene when they had been battered to death, then shoved into the boot of a Nissan Micra and left to stiffen into full rigor mortis.

‘I’m going to need to get her out to give you a proper cause of death, but from a preliminary examination she was beaten with something hard but rounded, like a pole, sometime within the last twenty-four hours.’ The pathologist stood back, touching the back of one gloved hand to her forehead. ‘I can’t narrow it down for you yet, but I’ll have a look at stomach contents during the post-mortem and make an educated guess.’

‘I can make an educated guess for you now. It was her husband.’ The voice came from beside me, where Detective Inspector Josh Derwent was taking up more than his fair share of room in the little ring of officers and crime-scene technicians that had gathered around the back of the car. The garage door was open but it still felt claustrophobic to me to be in that small, cluttered space. The air was dusty and the lighting cast long, dark shadows. I felt as if the piled-up junk was reaching out to grab me. Derwent had his hands in his pockets, with his elbows jutting out on either side. I had already inched away twice, to get out of range, but there was nowhere left to go.

‘Partner, then. Whoever that bloke is in the house.’

‘What makes you say that?’ The pathologist was new, earnest and heavily pregnant. I wished she would just ignore Derwent. She had no idea what she was dealing with.

‘If you’re basing that on statistical probability—’

One of the response officers cleared his throat. I thought he was going to raise his hand and ask for permission to speak. ‘He said he came back and she was missing. He said someone must have come into the house and attacked her.’

‘Yeah, he’d know. He was the one who did it.’ Derwent waved a hand at the body. ‘Say this wasn’t a domestic. Say it was a burglary gone wrong or a random murder. Why bother putting her in the car? Why not leave her in the house?’

‘To hide her,’ the response officer suggested.

‘Sir.’ I didn’t usually try to manage Derwent’s stream of consciousness but I had seen the look of shock on the pathologist’s face. Dr Early, who had arrived late and made a joke about it. Derwent hadn’t laughed.

‘What is it, Kerrigan?’ He glared at me.

I didn’t dare say why I’d actually interrupted. It would only provoke worse behaviour. ‘Just – why would Olesugwe move the body?’

‘He was planning to get rid of the body but then her sister came round.’

It was Princess’s sister, Blessed, who’d found the body and called 999. Last seen in hysterics being comforted by a female officer at the kitchen table, she’d been too incoherent to interview.

‘Why would he want to kill her?’ Early asked.

‘Your guess is as good as mine. She was having an affair, or he was, or she didn’t do the ironing.’ He looked down at the pathologist’s rounded belly. ‘She was four months pregnant, according to Olesugwe. Women are more likely to be victims of domestic violence when they’re up the duff.’

‘That’s a myth.’ Dr Early put a protective hand on her stomach, as if she was trying to shield her unborn child from Derwent’s toxic personality. I personally felt leadlined hazard suits should have been standard issue for anyone who came into contact with him, pregnant or not.

Derwent shook his head. ‘They did a study in the States. Murder is the third most common reason of violent death for pregnant women.’

‘What else kills them?’ I asked.

‘Well, this lady didn’t die in a car accident and she certainly didn’t beat herself to death.’ Dr Early folded her arms, resting them on top of her bump.

‘That’s my point. He killed her,’ Derwent said. ‘He gets angry about something, he beats her up, it goes too far, he dumps her in the car, starts to clean up, gets interrupted by the sister and all bets are off.’

‘There was a smell of bleach in the kitchen,’ I remarked.

‘And no sign of a break-in. Wherever she died should look like an abattoir but I didn’t see a speck of blood in the house.’ Derwent pushed past a couple of officers and peered into the back seat of the car. ‘Bags. If you forensic boys would like to do your jobs and get them out for us, I bet we’ll find blood-stained clothes in Olesugwe’s size.’

Dr Early looked down at Princess’s body. ‘I’ll need some help to get her out of the boot.’

‘Nice to hear a woman admit she needs some help,’ Derwent said, and walked out without waiting to hear what Dr Early had to say in response, or, indeed, offering any assistance.

The doctor’s lips were pressed together and her eyes were bright. I recognised the signs of someone trying not to cry. I’d been there, many times. ‘Is he always like that?’ she asked me.

The reason I could stand it was because in addition to his numerous personality defects, Derwent was a brilliant copper. He left the SOCOs to their work and took both Olesugwe and Blessed to the nearest police station, Great Portland Street, where Blessed confessed to the affair she’d been having with Olesugwe, and Olesugwe admitted that Princess had found out about it. The murder weapon – a metal pole that had been used as a clothes rail in the couple’s wardrobe – turned up in a shed in the garden of the small house, stuffed in a bag behind a lawnmower. Olesugwe had the key to the shed’s padlock on his key ring, as well as the only set of keys for the Nissan. When I pointed out that neither the padlock nor the car boot was damaged in any way, he admitted moving the body and hiding the weapon.

‘But he still won’t admit that he killed her,’ I said to Derwent as we left the police station, heading back to the office to get the paperwork underway. I shivered as the cold hit my face. We were on foot because Derwent had flatly refused to drive through central London to Somers Town, where Princess had breathed her last, when our new offices were in Westminster and it was twice as fast to go by public transport.

‘He’s still looking for a way out. I bet he’ll say it was Blessed who attacked her and he was just trying to help her.’

‘Do you think that’s what happened?’

‘Nope. Doesn’t matter, though. He’ll still lie about it.’

‘I don’t think Blessed would have called the cops before they were finished tidying up if she’d been involved.’

‘I’ve noticed,’ I said. I was only a detective constable but I had seven years of experience behind me. Derwent tended to forget that.

Instead of answering me, he sighed. ‘What a waste of fucking time.’ It wasn’t my imagination: Derwent’s mood was darker than usual.

Rock Chick 04 Renegade by Kristen Ashley
The Second Man by Emelle Gamble
Death Orbit by Maloney, Mack
Blood of the Reich by William Dietrich
Bedroom Eyes by Hailey North
The Sinatra Files by Tom Kuntz
The Old Deep and Dark by Ellen Hart
Drawing Closer by Jane Davitt
Tales of the Red Panda: The Android Assassins by Gregg Taylor
The Nantucket Diet Murders by Virginia Rich