The Summer Is Ended and We Are Not Yet Saved

BOOK: The Summer Is Ended and We Are Not Yet Saved
>>DOWNLOAD HERE >>READ ONLINE NOW
ads 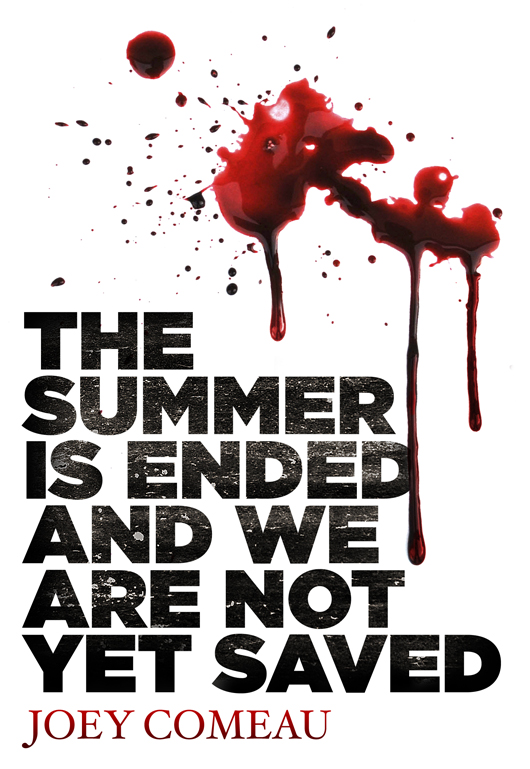 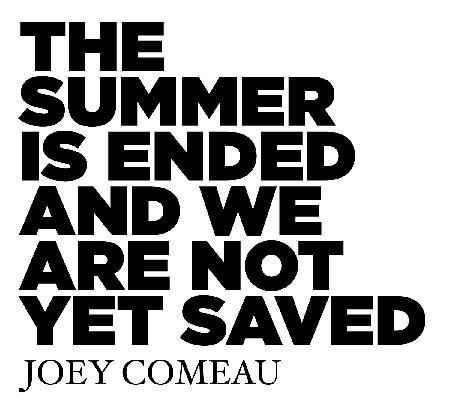 Edited and copyedited by Peter Chiykowski
Proofread by Stephen Michell

It wasn’t an easy birth. At four in the morning, after fourteen hours, the baby still hadn’t come. Why wouldn’t they give her more drugs? Did they think she was some kind of hippie? The doctor kept telling her she was doing just fine, and telling her to push. Elizabeth had never wanted to murder anyone before that moment.

She hated his stupid smug face. It didn’t make any rational sense, but she was convinced that killing the doctor would stop the pain. She could coax him closer until he was leaning over her, patting her arm reassuringly, and then she could tear into his throat, her teeth grinding through the thin walls of his major artery. And then her pain would pour out of her onto the floor, like the blood from his smug doctor body.

And who knows? It might have worked if she hadn’t betrayed her intentions so clumsily. The doctor kept smiling reassuringly, and Elizabeth couldn’t think. She wanted to coax him closer somehow, but the pain made it impossible to formulate a plan.

“Bring your neck here,” is what she wound up saying. “Bring it here. Bring me your neck!” The bedsheets were wet in her hands, and the doctor smiled even wider.

“I think we can give her another epidural,” he said to the nurse at his side. “Make her a bit more comfortable.”

“Did you miss me?” Elizabeth said.

It was her first day back at the makeup counter, and Janice was late. Elizabeth had covered for her, as always. They weren’t exactly friends, but they had to work together and in the past year Elizabeth had gotten good at getting along. She just thought of it as part of her job. Janice was like a customer, that way. It was part of Elizabeth’s job to be nice to her, even if she was kind of an idiot.

“Oh, I didn’t think you were coming back,” Janice said. She leaned down to reapply her lipstick in the small round counter mirror.

“I was having my baby,” Elizabeth told her. Janice didn’t look up.

“Oh yeah,” she said. “Right.” She finished her makeup and then leaned back against the cash register. “God, it must have messed you up. What’s it like down there now? My cousin Alex says his girlfriend came home from the hospital with a fucking slaughterhouse between her legs. And postpartum depression or whatever they call it.” She exaggerated a shudder. “More like post-traumatic stress disorder. You should see the size of their daughter’s head. Did it hurt? What’d you name it?”

“Martin,” Elizabeth said, and she laughed. She knew Janice didn’t care, but she couldn’t stop talking about him. “Oh god, he’s ugly,” Elizabeth said. And he was. He was ugly the way babies are ugly, strange and shrunken and wrinkled, but he was beautiful, too. A person. He had the smallest hands and the clearest eyes she had ever seen.

“But did it hurt though?” Janice said.

What a vapid question, Elizabeth thought. “Of course it fucking hurt!” She took a quick look around for their boss. “It hurt so much at one point that I threatened to murder the doctor. I just wanted to bite into his neck and tear the throat right out of him. I could almost smell his blood.”

“Oh . . . kay,” Janice said. She turned away, and Elizabeth was sure that she would have rolled her eyes if there had been anyone to roll them for.

“I just kept gnashing my teeth at him,” Elizabeth said, leaning forward so that she was close to her co-worker’s face. “And howling like an animal. That’s what we are, don’t you think? Just animals? Maybe I should have chewed through Martin’s umbilical cord myself, you know? I should have eaten his placenta like we would in the wild.”

“Someone should call social services on you,” Janice told her. “It ought to be against the law for a freak like you to raise a baby.”

Elizabeth told the story about wanting to kill her doctor again and again over the next few years. It became part of the story of Martin’s birth. She told it so often that when she started working part-time as a makeup artist on a local television show almost a decade later, it was still the first thing that she thought of when the director needed one of the characters to kill a doctor.

Her eyes lit up when she came across it in the script. Just those four simple words. “He kills the doctor.” It was like she’d been holding onto that murderous feeling for ten years, and now she had the chance to finally tear his throat out.

At home she stayed up late into the night, making a piece of flesh that would sit invisibly on the doctor’s throat. She tried different colours for the stringy tendons hidden inside, finally settling on a garish purple. This was the colour she’d imagined that day in the hospital.

There was a soft tap at the door to the office.

“Come in,” she called, sitting back from the workbench.

“Of course!” she said. And she showed him how it worked. It was soft, so it could be torn into with the actor’s teeth. Torn out. Blood and the stringy elastic of tendons tight and dripping. There was a small pouch of blood in there, too, that would tear open easily.

“That’s disgusting,” Martin told her, but he was smiling.

The next day she set up the effect on the doctor, and tried to explain to the other actor how to bite into it. Behind her, the director started laughing.

“Are you insane?” he said. “We can’t show that on daytime television!” He looked amused, though.

After they shot the scene with a much simpler (and more television-appropriate) bloodstain gun-shot wound under the doctor’s lab coat, the director took Elizabeth aside and told her about a friend who was making a horror movie.

“It doesn’t pay very well,” he told her.

But it did sound like fun, and that is how the best careers are made. Elizabeth made the same throat effect for the horror movie. And she designed a section of fake skull that could open and expose an unexpectedly pulsing brain. They loved it. And so the director told another director and so on.

The work didn’t come often. She still had to keep her job with the TV show, and her job at the makeup counter, but she loved working on horror movies. She took pictures of the grossest effects to bring home for her son.

The two of them were partners in crime, sitting together on the couch watching horror movies again and again, deciding which scene was the grossest. Grossest was always best. He helped her come up with new ideas, too. Bits of brain that plopped like bubbling oatmeal. Eyeballs filling up with blood. When she heard that the director of
Blood Socket 2
was thinking about coming to Halifax to film, it was Martin who helped her put together a portfolio. He helped her pick which clips to put on her demo reel. And on the day of her big meeting, her eleven-year-old son walked her to the door and kissed her on the cheek.

“Good luck,” he told her. “Tear their throats out.”