Read The Summer of Me & You Online

The Summer of Me & You

BOOK: The Summer of Me & You
>>DOWNLOAD HERE >>READ ONLINE NOW
ads 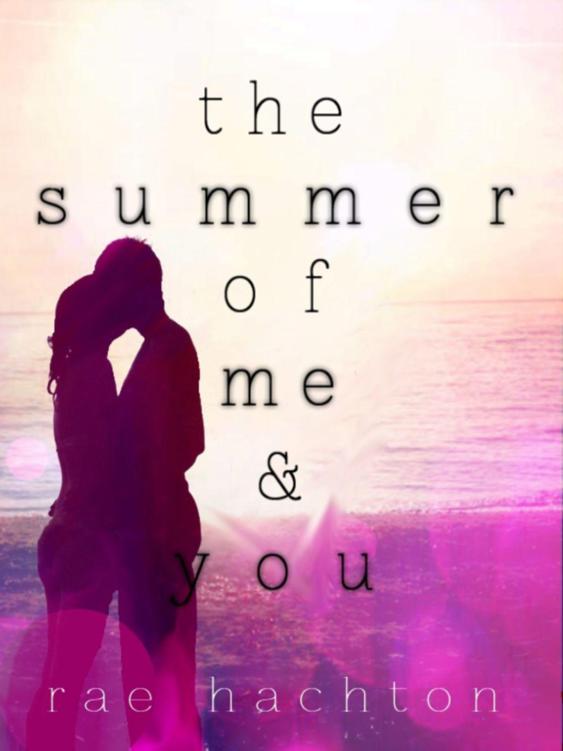 THE SUMMER OF ME AND YOU

The Summer of Me and You.

Teen Pulse, a publishing company for Teen Fiction. This book is a work of fiction. Any references to historical events, real people, or real locales are used fictitiously. Other names, characters, places, and incidents are products of the author’s imagination, and any resemblance to actual events or locales or persons, living or dead, is entirely coincidental.

All rights reserved, including the right of reproduction in whole or in part in any form. This ebook is licensed for your personal enjoyment only. This e-book may not be re-sold or given away to other people. If you would like to share this book with another person, please purchase an additional copy for each recipient. If you’re reading this book and did not purchase it, or it was not purchased for your use only, then please return to e-book retailer and purchase your own copy. Thank you for respecting the hard work of this author.

A boy and a girl who have loved each other from a distance finally get together over one summer.

A print copy is available at most book retailers.

I was sitting in the sand watching the ebb and flow of the tide when she arrived. “I can't believe we're here again.” The ocean air blew her hair into waves.

“I can't believe
you're
here,” I said, standing.

“Are you kidding? I'd be
anywhere
you are.”

I gazed at her for minutes, trying to decipher what was different about her. What was different about us. Four summers later, and we were finally here again. I told her I would wait, and she came back here for me. That one summer we'd spent together had defined a lot of things for me. With Kayleigh I had grown and the time apart hadn't separated us. Right now, everything was the same. Exactly the same as it'd always been.

The First Time I Fell In Love With Kaleb

The first time I fell in love with Kaleb Scheffler I was in my backyard gazing up at the cold February sky. The wind was bitter and I had on my favorite sweater. I was wishing it'd snow. In fact, I was praying for it. From behind me I heard a thud, like something had fallen from far above and crashed to the ground. I pulled my eyes away from the sky and swirled around. Kaleb was lying in my backyard on his back, his head turned and silently laughing. He'd hopped over my fence and had fallen down into my yard. He jumped up and walked over to me with a slight limp.

He pressed a finger to his red lips. “Shh,” he said. “Be quiet.” But his lips were smiling and he had a devious glimmer in his eyes.

I whispered to him, “I heard you were grounded for life.”

He shrugged. “I jumped out of my window to be with you.”

“It is.” Even at fifteen, he was unlike other guys. Something about him was always more mature, more serious. Deep.

He lived near the railroad tracks. But it must've not been that far from my house because I could hear the train wailing at night. It never sounded too distant.

“I ran through a junkyard, leapt over cars, and jumped across barbed wire just to get to you. Now I'm bleeding.” He rolled his pants leg up, showing me the laceration. “Snagged it on the barbed wire.”

I could see where his already worn jeans were torn and blood stained.

“Doesn't that hurt? Even a little?”

“For you I am. Nothing can keep me away from you. I'm not going to let a damn thing come in between us.”

I just laughed. He looked so serious saying that. He'd been chasing me around ever since the first grade. He was always devising a new way to get my attention.

“My step-dad happened. Stephen is such a dick. He wouldn't let me leave the house. He locked me in my room, like what the fuck—I'm sixteen, I'm grown. So I jumped out the window.”

“You're not gonna be sixteen for three more months,” I told him.

“Why are you here, really?”

“It's Valentine's Day,” he said, resting against the maple tree.  A light wind rustled through the brittle leaves, skittering them across the ground.

“So, what was your big plan anyway? I mean, what if I'd been in my room or something? You know my mom wouldn't have let you in to talk to me.”

“Then I would've crawled through your bedroom window.” Kaleb reached up his hands and held on to the branch above him.

“What makes you think I would've let you in?”

“Because,” he said confidently. “I know you like me.”

“If that's what you think.”

“One day, you're going to love me Kayleigh Jamison.” He gazed at me in a long fixed stare. A few seconds later, snowflakes fell from the sky, swirling around us and the moment was perfect. Until my mother tapped on the back window. I broke eye contact and turned my head in my mom's direction. She was looking out the window, watching me.

“Tell that boy to leave,” she said. I was going to turn back around, tell Kaleb to ignore her and stay. But when I did, he had already sauntered off before I could stop him. I watched as he hoisted his body up and over the fence, and disappeared from view.

On that cold February night, I listened to the same song over and over again, thinking about him. A few days later, after school, I went down by the railroad tracks. There was a graffiti tunnel—it was sorta like a hide out. I knew I'd find Kaleb there. He was usually always there.

He was lying down when I got there. “How can you lay here like this?”

“I like to listen to the train pass by.”

“Because I like the sound.” He leaned up to look at me. “Besides, what are you doing here?”

He stood up and walked over to me. “Remove your glasses,” he said.

“I wanna see your eyes when I kiss you.”

My heart fluttered. But I didn't remove my glasses. I didn't do anything. I just froze up. Kaleb leaned in anyway. And just as he was about to kiss me, a train suddenly wailed. I snapped out of my daze and ran away from him.

I don't know why, but after that day we never spoke again. Maybe it was because I was too afraid of him. Afraid if I gave him my heart, he would surely break it. He was too gorgeous, too charming.

I was too in love.

In the Beginning there was a girl

In the beginning there was a girl. She doesn't deserve to be named because she didn't stay in my life long enough to be important—in fact she was only there momentarily, to help fuck it up.

I didn't know what was happening to me when I'd take the baseball bat and bash the shit out of everything in my way—complete totality and destruction. I felt devilish as I destroyed my room. Something was terribly wrong with me and I just wanted it to stop. And it wasn't anger issues, because really—I had nothing to be angry about.

This path to destruction began when my step-sister Rebekah told her boyfriend Needles I was losing my mind and he said it was because I needed to get laid.

I went with him to this wild ass party. It wasn't like I thought it'd be. Not like the ones on TV with rap music and beer kegs.

Metal music, guys in tattoos and piercings, people covered in sweat. Someone getting inked in the back of the room and making faces like it turned them on. And the drug of choice wasn't alcohol or weed. I wanted to bolt right then and there. But he caught my expression.

“Stop it, man. You're only thinking of Kayleigh because you're a virgin. Look around, dude. Your wet dreams are comprised of some nerdy girl? After you have a taste of all of this, the real female, you won't want her.”

Things I didn't tell him because it was none of his damned business. For one—I wasn't a virgin. I'd lost my virginity when I was fourteen. For two—I used to fool around with Rebekah, his hot (I can't say that about her anymore) girlfriend before she became my step-sister.

I ended up in a room with that girl who shall remain nameless and she told me she had a cure for my moods. Relax and give in.

Sex seemed to be the cure for everyone's problems.

What an idiot I was. She wasn't referring to the sex.

All I remembered that night was her jet black hair flying all around the place, her pierced lips crushing against mine, unwelcome, her tattooed arms swaying, her fingers crawling all over my body, and a needle in her hand.

She fucked me up.

No it wasn't—it was methamphetamine.

But when it was inside of me, I felt like a god. And I ended up becoming her sex slave just to get more. I let her do anything she wanted to me. I just closed my eyes, my heart was on fire—I sweated like madman. The fire licked my entire body. I almost couldn't breathe.

I wanted to be back at home bashing the hell out of things. The metal music pumped through my veins—the beating, the crashing, the anger.

The anger came rushing back into me. The drug hadn't made it go away. It only temporarily numbed me. In fact, without the drug, I became far worse. And I was letting this bitch use my body just so I could destroy my life.

And Kayleigh never left my mind, not even once.

Even when we—that girl and I—were fucking there was always that image dancing in the back of my mind—of the girl in glasses with the calm demeanor and sweet voice, and the boy who hugged her; everything was fucking cupcake sweet with sprinkles on top. But all I could think about was Kayleigh on top of me, doing what this girl didn't quite do right. Maybe it wasn't that she didn't do it right, she just wasn't the girl I wanted. But would the girl I wanted always be a fantasy?

I couldn't change her, or pull off those damn glasses or make her wear eyeliner or make her abuse my body so damn hard I submitted to her. It was all in my head. And if I were being completely honest with myself, the only way I was able to keep up this performance with this girl on top of me who was not my dream girl, was to fantasize about my dream girl. It was the only way to stay hard.