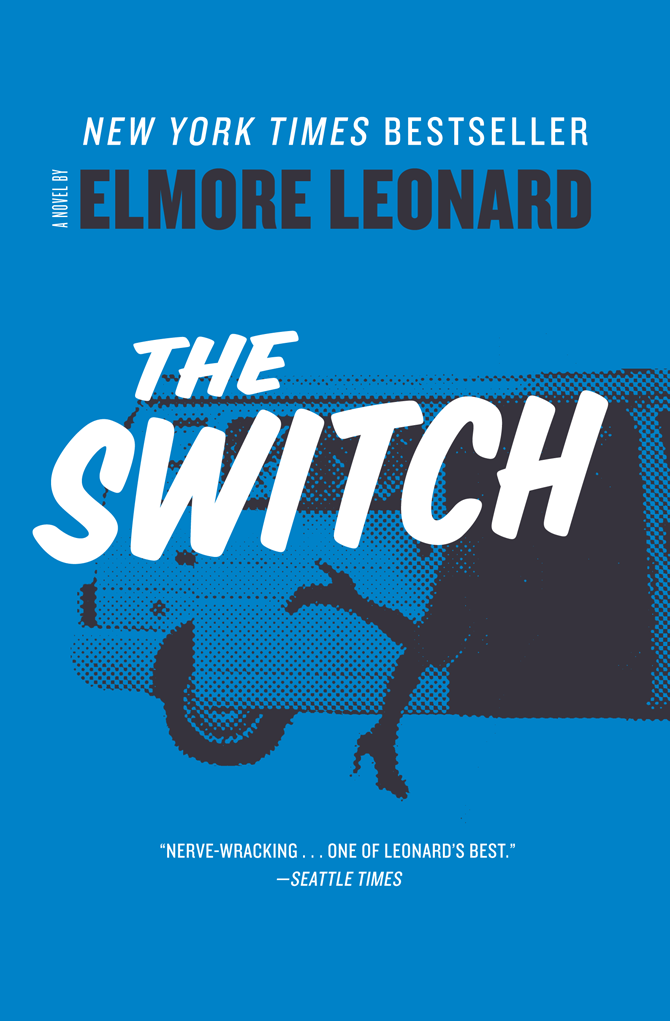 For Mom and Another Mickey

As of November 2002:
Unless otherwise indicated (*), all titles are available from HarperCollins e-books. All titles are available in print form in dazzling new editions by HarperTorch paperbacks, with the exception of:
The Moonshine War
(1969);
Swag
(1976); “Fire in the Hole” (2001). “Fire in the Hole” is available within HarperCollins e-book and William Morrow hardcover editions of
When the Women Come Out to Dance
(2002).

Jack Ryan always wanted to play pro ball. But he couldn't hit a curveball, so he turned his attention to less legal pursuits. A tough guy who likes walking the razor's edge, he's just met his match â and more â in Nancy. She's a rich man's plaything, seriously into thrills and risk, and together she and Jack are pure heat ready to explode. But when simple housebreaking and burglary give way to the deadly pursuit of a
really
big score, the stakes suddenly skyrocket. Because violence and double-cross are the name of this game â and it's going to take every ounce of cunning Jack and Nancy possess to survive .Â .Â . each other.

Houston Chronicle
: “[Leonard is] a sage poet of crime.”

She was facing him now, her cold look gone and smiling a little. Of course it's loaded.

“You going to shoot something?”

“We could. Windows are good.”

“So you brought a gun to shoot at windows.”

“And boats. Boats are fun.”

“I imagine they would be. How about cars?”

“I didn't think about cars.” She seemed pleasantly surprised. “Isn't that funny?

“Yeah that is funny.”

“There's a difference,” Ryan said, “between breaking and entering and armed robbery.”

“And there's a difference between seventy-eight dollars and fifty thousand dollars.”

Nancy said, “How badly do you want it?”

Vincent Majestyk saw too much death in the jungles of Southeast Asia. All he wants to do now is farm his melons and forget. But peace can be an elusive commodity, even in the Arizona hinterlands â and especially when the local mob is calling all
the shots. And one quiet, proud man's refusal to be strong-armed by a powerful hood is about to start a violent chain reaction that will leave Mr. Majestyk ruined, in shackles, and without a friend in the world â except for one tough and beautiful woman. But his tormentors never realized something about their mark: This is not his first war. Vince Majestyk knows more than they'll ever know about survival .Â .Â . and everything about revenge.

Majestyk was running across the open scrub, weaving through the dusty brush clumps, by the time Renda got out of the car and began firing at him with the automatic, both hands extended in the handcuffs. Majestyk kept running. Renda jumped across the ditch, got to the fence, and laid the .45 on the top of a post, aimed, and squeezed the trigger three times, but the figure out in the scrub was too small now and it would have to be a lucky shot to bring him down. He fired once more and the automatic clicked empty.

Seventy, eighty yards away, Majestyk finally came to a stop, worn out, getting his breath. He turned to look at the man standing by the fence post and, for a while, they stared at one another, each knowing who the other man was and what he felt and not having to say anything. Renda crossed the ditch to the Jag and Majestyk watched it drive away.

Detroit businessman Harry Mitchell had had only one affair in his twenty-two years of happy matrimony. Unfortunately someone caught his indiscretion on film and now wants Harry to fork over one hundred grand to keep his infidelity a secret. And if Harry doesn't pay up, the blackmailer and his associates plan to press a lot harder â up to and including homicide, if necessary. But the psychos picked the wrong pigeon for their murderous scam. Because Harry Mitchell doesn't get mad .Â .Â . he gets even.

The Gray Line sightseeing bus was approaching the foot of Woodward Avenue when Bobby Shy started up the aisle in his light-gray business suit and sun-glasses, past the thirty-six heads he had counted from his seat in the rear. They were mostly couples, out-of-town conventioneers and their wives, middle-aged or older, almost all of them wearing glasses and name tags.

“That beautiful structure on the left is the City-Country Building,” the driver was saying into the mike clipped to his lapel. “And the statue in front is the world-famous âSpirit of Detroit.' Sitting there, that man is sixteen feet high and weighs over sixteen thousand pounds. Ahead of us now you see the Detroit River.”

As the bus turned left onto Jefferson, heads raised and gazes shifted to look at the river and dismal gray skyline beyond.

“Across the way, beautiful downtown Windsor, Ontario,” the drive said. “You can get over to Canada by tunnel or bridge. There used to be a ferry, but I believe he was arrested some time back. The amazing thing is that, at this particular point, Canada is south of the United States.”

At the front of the bus now Bobby Shy ducked his head to look out. Straightening again he reached inside the jacket of his light-gray business suit, came out with a .38 Colt Special and placed the barrel gently against the driver's ear.

“Give me the mike, man,” Bobby Shy said.

Three guys with illegal expertise, a plan to snag a tax-free hundred grand, and a taste of summertime Detroit's sweet life. But it means committing armed robbery. And being smart enough to get away with it.

The New York Times
: “Leonard is nobody's follower, and he has a style of his own. “Swag” is one of the best of the year.”

There was a photograph of Frank in an ad that ran in the
Detroit Free Press
and showed all the friendly salesmen at Red Bowers Chevrolet. Under his
photo it said Frank J. Ryan. He had on a nice smile, a styled moustache, and a summer-weight suit made out of that material that's shiny and looks like it has snags in it.

There was a photograph of Stick on file at 1300 Beaubein, Detroit Police Headquarters. Under the photo it said Ernest Stickley, Jr. 89037. He had on a sport shirt that had sailboats and palm trees on it. He'd bought it in Pompano Beach, Florida.

The first time they ever saw each other was the night at Red Bowers Chevrolet Telegraph when Stick was pulling out of the used car lot in the maroon '73 Camaro. Frank walked up to the side window as the car stopped before turning out on the street. He said, “You mind if I ask where you are going?”

Detroit process server Jack Ryan has a reputation for being the best in the business at finding people who don't want to be found. Now he's looking for a missing stockholder known only as “Unknown Man #89.” But his missing man isn't “unknown” to everyone: a pretty blonde hates his guts and a very nasty dude named Royal wants him dead in the worst way. Which is very unfortunate for Jack
Ryan, who is suddenly caught in the crossfire of a lethal triple-cross and as much a target as his nameless prey.

The New York Times Book Review
: “Remarkably ingenious .Â .Â . Will keep you on the edge of your chair.”

A friend of Ryan's said to him one time, “Yeah, but at least you don't take any shit from anybody.”

Ryan said to his friend, “I don't know, the way things've been going, maybe it's about time I started taking some.”

This had been a few years ago. Ryan remembered it as finally waking up, deciding to get off his ass and make some kind of run.

His sister drove him down to the Detroit police car auction where he bough a 1970 maroon and white Cougar for $250. His sister didn't like the Cougar because it had four bullet holes in the door on the driver's side. Ryan said he didn't mind.
Didn't mind
; he loved them.

Al Rosen was doing just fine, hiding out in Israel â until he decided to play Good Samaritan and rescue some elderly tourists from a hotel fire. Now his picture's been carried in the stateside press, and the guys he's been hiding from know exactly where he is. And they're coming to get him â crooked lawyers, men with guns and money, and assorted members of the Detroit mob who are harboring a serious grudge. Playtime in paradise is officially over; Rosen's a million miles from home with a bull's eye on his back. And his only ally is a U.S. Embassy marine who's been looking for a war .Â .Â . and who's damn well found one.

Rosen first noticed the tourist lady on Friday, the day before the fire. He saw her and said to himself, New York.

She had the look â a trim forty-year-old who kept herself together: stylish in a quiet way, neatly combed dark hair and sunglasses; tailored beige sundress, about a size eight or ten; expensive cane-trimmed handbag hanging from her shoulder; nothing overdone, no camera case, no tourist lapel badge that said “Kiss Me, I'm Jewish,” Rosen, watching her walk past the cafe, liked her thin legs, her high can, and her sensible breasts.

Ordell Robbie and Louis Gara hit it off in prison, where they were both doing time for grand theft auto. Now that they're out, they're joining forces for one big score. The plan is to kidnap the wife of a wealthy Detroit developer and hold her for ransom. But they didn't figure the lowlife husband wouldn't want his lady back. So it's time for Plan B and the opportunity to make a real killing â with the unlikely help of a beautiful, ticked-off housewife who's hungry for a large helping of sweet revenge.

Ordell brought out his box of Halloween masks set it on the coffee table in front of Louis and said, “Now you know how long I've been working on this deal.”

They were in Ordell's apartment, Louis stretched out in a La-Z-Boy recliner with the Magic Ottoman up. He'd been sitting here four days on and off, since Ordell had met him at Detroit Metro and told Louis he was coming home with him. Louis had said home where? Some Place in Niggerville? Ordell said no, man, nice integrated neighborhoods. Ofays, Arabs, Chaldeans, a few colored folks. Ethnic, man. Eyetaliain grocery, Armenian party store, Lebanese restaurant, a Greek Coney Island Red Hot where the whores had their coffee, a block of Adult Entertainment, 24-hour dirty movies, a club that locked the doors and showed you some bottomless go-go and a park where you could play eighteen holes of golf. Does it excite you?”

Clement Mansell knows how easy it is to get away with murder. The seriously crazed killer is already back on the Detroit streets â thanks to some nifty courtroom moves by his crafty looker of a lawyer â and he's feeling invincible enough to execute a
crooked Motown judge on a whim. Homicide Detective Raymond Cruz thinks the “Oklahoma Wildman” crossed the line long before this latest outrage, and he's determined to see that the hayseed psycho does not slip through the legal system's loopholes a second time. But that means a good cop is going to have to play somewhat fast and loose with the rules â in order to maneuver Mansell into a Wild Midwest showdown that he won't be walking away from.

Game Six by Mark Frost
Home Fires by Luanne Rice
Young Money: Inside the Hidden World of Wall Street's Post-Crash Recruits by Roose, Kevin
Darkness Becomes Her by Lacey Savage
The Marcher Lord (Over Guard) by Glenn Wilson
Obscure Blood by Christopher Leonidas
The Charmers by Elizabeth Adler
The Excellent Lombards by Jane Hamilton
Meet Me at the Cupcake Café by Colgan, Jenny
The Knight and Knave of Swords by Fritz Leiber