Read The Sword and the Plough Online

The Sword and the Plough 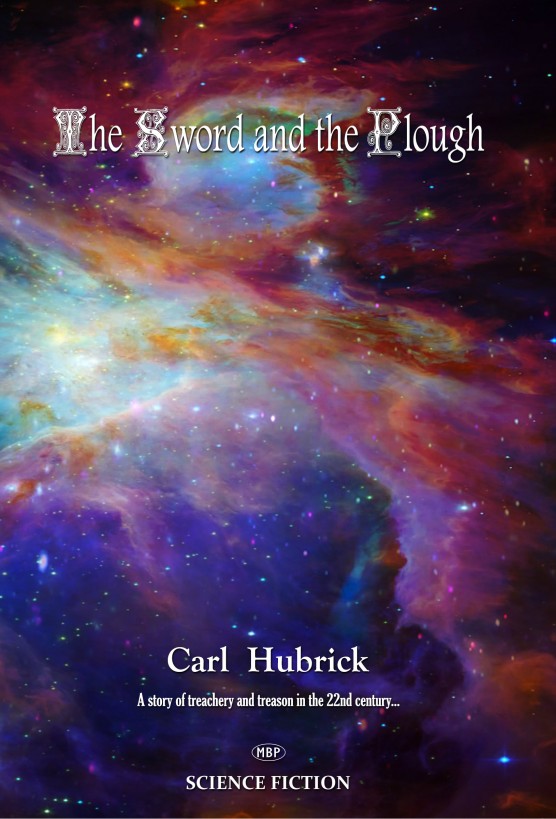 The Sword and
the Plough

The story of
the Megran rebellion of 2175 AD

This ebook is
licensed for your personal enjoyment only. This ebook may not be
re-sold or given away to other people. If you would like to share
this book with another person, please purchase an additional copy
for each recipient. If you are reading this book and did not
purchase it, or it was not purchased for your use only, then please
return to Smashwords.com and purchase your own copy. Thank you for
respecting the hard work of this author.

THE SWORD AND
THE PLOUGH

This book is
copyright under New Zealand law and the Berne Convention. All
rights reserved. No part of this publication may be reproduced,
stored in a retrieval system or transmitted in any form or by any
means without the prior written permission of the publisher.

This story is a
work of fiction. Names, places, characters and incidents are either
the product of the author’s imagination or used fictitiously. Any
resemblance to actual events, organizations or persons is entirely
coincidental and beyond the intent of the author or publisher.

by the same
author

Of Gods and
Other Aliens
(Five short stories with similar themes)

Yesterday,
Before the Sky Fell
(A story of love, betrayal and
murder)

For my wife and
sons

The Earth Commonwealth of
Planets
–
2175 AD

Ruled by the monarchy since 2081 AD

List of planets in order of discovery and
settlement, and their ruling governors; all the governors are
members of the queen’s extended family – the ruling aristocracy –
and appointed by Her Majesty.

Megran
– a large
planet, almost twice the size of Earth – similar in climate, rich
in resources, and growing rapidly in wealth and power – highly
industrialized; the choice of many migrants from the densely
overpopulated Earth. Governor: Prince Ferdinand.

Trion
– a frontier
planet, one and half times the size of Earth, with a hard volcanic
rock surface, requiring
rock ploughs
. Primary economic activities include
agriculture and mining; the last planet of the Commonwealth to be
colonised. Governor: Sir Henry Tudor.

Planet EARTH –
ruling planet of the EARTH COMMONWEALTH of

Captain Johan De Vries of the Queen’s Guard
Regiment, acknowledged the greetings and smiled back at the host of
familiar faces that passed by him as he strode down the corridor
leading to the regiment’s gym.

Most were regulars of his regiment back from
their pre-breakfast workout. They were wearing the assorted
t-shirts and chinos of casual civilian attire, but here and there,
the red jacket and black trousers of the queen’s colours stood out
in the flow.

There were less than six hundred soldiers in
the queen’s exclusive Guard Regiment. The regiment took only the
best.

Captain De Vries was taller than most, with
dark hair, a bronzed complexion, clever golden brown eyes, and a
pencil moustache. He had been a member of Her Majesty’s forces for
six of his twenty-four years. The red jacket he wore carried the
gold crown of an officer in the Queen’s Guard Regiment on the
shoulders and collar. The gold orb or globus on his epaulettes also
marked him as one of the elite. Officially, he was Captain Johan
Andreas De Vries, but his friends knew him affectionately as
Captain Johnny.

A burly young staff sergeant of African
descent fell into step beside him. The three bar inverted chevron
insignia of his rank stood out in gold on the shoulder of his
scarlet jacket. The measured clack of the pair’s black boots echoed
in unison down the corridor.

Staff Sergeant Fofana grinned, his teeth
ultra white against the polished mahogany hue of his skin.

“Going down to watch Lieutenant York
introduce the new recruits to the martial arts are you, sir?” the
staff sergeant enquired.

The captain laughed. “Yes, always a sight to
take in when you’ve got the time.”

Lieutenant Cheryl York stood at ease in the
centre of the grappling mat, and regarded the latest army recruits
in their pristine white martial arts uniforms with a dispassionate
stare. The fifteen recruits, with their scalps shining through the
bristle that was left of their hair, stood in a line down one side
of the mat and gazed back.

They were a mixed bunch of what had once
been termed
ethnicities,
usually so identified by their places of origin. But no one
spoke of such differences anymore. Such distinctions had largely
disappeared in the melting pot that was
The Earth
Commonwealth of Planets.

The grappling mat was in one corner of a
large white-walled gym. The gym was full. All around, young men and
women were engaged in combat training
, fighting barehanded or with staves or sticks,
swords or knives. Hard-line sergeants ranted and kept their charges
hard at it. Harsh cries rent the air – the battle cry of each
combatant – the
kiai.

Cheryl York was a young woman of twenty-two
or twenty-three. The lieutenant did not impress by her size or
muscle, as one might expect a martial arts instructor to do. But
the petite female form beneath the martial arts uniform, the
delicately formed features, the sparkling blue eyes, and the shiny
brown hair tied back in a pony tail, had the rapt attention of her
men. She was the girl next door most young men aspire to meet.

Lieutenant York studied the group of young
males silently for a moment or two, a slight frown crinkling her
brow. When at last she did speak, her voice was as velvety and
feminine as every recruit had silently prayed it would be.

“
I know many of you have joined the
regiment to be captains, colonels, generals and the like,” she
began. “Some of you may ev
en
have the higher ambition of becoming a cook for the
officers’ mess.”

The lieutenant paused, and there was a buzz
of stifled laughter in the space. “But when it comes down to it,”
she continued, “you now belong to the military, and the military
will decide what your future will be.”

The lieutenant pointed to one of the young
men. “
You
!
Private! What is the main purpose of the military? Yes you, the one
turning round to see who I’m pointing at.”

The recruit spun back, his cheeks
reddening.

The tyro began hesitantly. “To protect our
queen and The Earth Commonwealth of Planets against… against…” Then
he remembered the brochure that had first introduced him to the
military. “
Against insurrection within or the enemy
without
,” he finished
confidently.

Cheryl York smiled. It warmed her men like
the sun.

“Right! And what must we do if we are called
upon to protect our queen and the Commonwealth?”

The lieutenant nodded, though her look
expressed a degree of disappointment with the answer.

“
Yes… if there is no other way,” she
answered. “Certainly, we must always be
prepared
to do battle to protect the
freedoms and rights our Commonwealth –
our queen –
has gifted to us.
Unfortunately, on occasion, it is the only option we are left
with.”

The young woman paused, hoping to register
the enormity of what she was about to tell them.

“
But
to fulfil that purpose you must have the heart for it. You
must have
iron
in
your soul.” She drew in another pause making breath. This was
something she needed them to fully understand.

“
And that is what
we are here for today and every day you come to me
for training. We are here to put
iron
in your soul.

“
It doesn’t matter whether you fight with
your fists, your wits, or a spaceship with the fire-power of an
exploding sun, you must have the heart for battle.”

She fell silent then and fixed her gaze for
an instant on each face around the grappling mat. The recruits held
their collective breath.

“
Perhaps one day,” she resumed in a quieter
voice, “you will need to give all that you are. See it as
your
duty
to do
so. If that time comes, you will need to know you
can
give everything, because you
are the best…the best there is.” Her voice tapered into
silence.

Suddenly the young woman stormed forward and
leapt into the air, launching a flying kick. The recruits reeled
back in alarm. Then she dropped and whirled into a succession of
high reaching round kicks, any one of which would have taken the
head off the tallest male there, had she been the merest bit
closer.

She came to a halt, like the most agile
gymnast, and stood almost toe to toe with the nearest recruit, her
arms akimbo.

“Right, which one of you will be the first to
challenge me?”

There was an anxious murmur amid the young
men. Even the smallest of them probably weighed half as much again
as the lieutenant, and they were fit and strong. They were the
cream of the recent recruitment intake.

They shuffled into a circle and muttered
together, seeking a champion.

“Well, who’s first?” the young woman asked
again after a long interval, a trace of impatience in her tone.

No answer came. Chivalry, gloriously, was not
dead. To attack a woman was not part of their male code.

The lieutenant turned to the officer and
staff sergeant who were now standing, watching, a short distance
away.

“
Captain De Vries – Staff Sergeant Fofana,
I wonder if you might assist these recruits to select my
opponent.”

“It’s all right, ma’am, we’ve made a choice,”
a recruit spoke out of the group before the watchers could
intervene.

The chosen one was shuffled out of the group
like a rugby ball from a scrum, a dark-haired young man with copper
skin toning. He was the smallest of the recruits; nevertheless, he
towered above the lieutenant.

Broken: Book 1 of the Scars and Sorrow Saga by Mary E. Palmerin
Dust of Eden by Thomas Sullivan
Another part of the wood by Beryl Bainbridge
Whisper of Scandal by Nicola Cornick
To Claim Her by Renee Burke
Everlasting Desire by Amanda Ashley
Bridge Too Far by Ryan, Cornelius
Schooled In Lies by Henry, Angela
On the Road: (Vagabonds Book 2) (New Adult Rock Star Romance) by Jamison, Jade C.
Colony East by Cramer, Scott