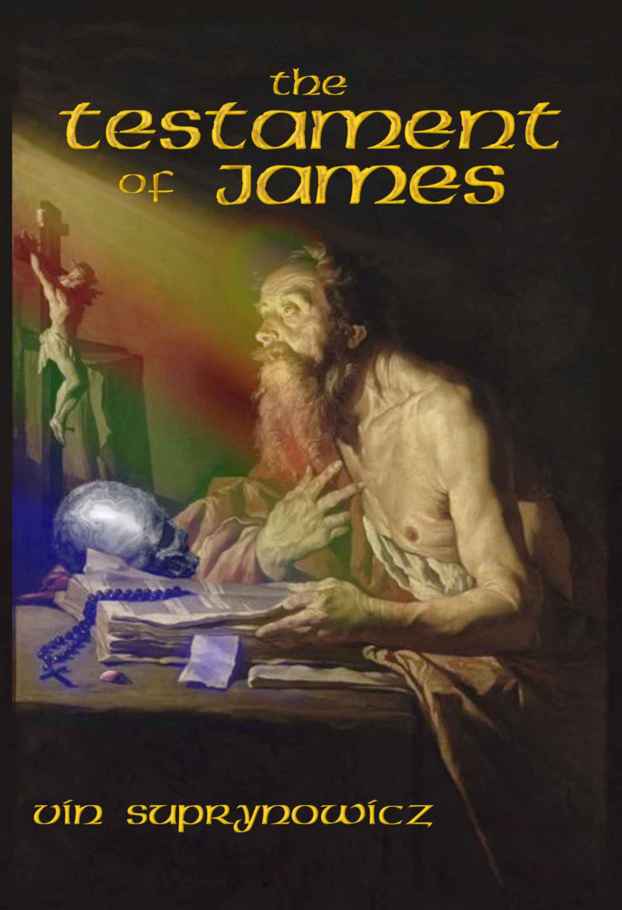 From the Case Files of
Matthew Hunter and Chantal Stevens

Vin’s books can be purchased from
Cat’s Curiosities

Author photo by the Brunette

All rights reserved.
No part of this publication may be translated, reproduced, or transmitted in any form or by any means, electronic or mechanical, including photocopying and recording, or by any other information or retrieval system, without the express written permission of the copyright owner.

Praise for
The Testament of James
If the
Da Vinci Code
comes to mind (and I’m sure it will, to Vin’s eternal despair), forget it. Although a biblical mystery,
TToJ
is simpler, shorter, less frenetic, and all its action takes place within a few days and a few miles of Books on Benefit (in Providence, Rhode Island, which is both H.P. Lovecraft territory and Edgar Allan Poe territory, you might notice). Its conclusion is also a heck of a lot more relevant than the one in the famous Dan Brown book. . . . I received my copy on Christmas Eve and had devoured it before getting out of bed on Christmas morning.

— Claire Wolfe
, author of
101 Things To Do ‘Til the Revolution
and
Don’t Shoot the Bastards Yet
, from the Living Freedom blog at BackwoodsHome.com.

Now and then I see reviewers refer to a novel as a ‘romp.’ I don’t know that I’ve ever done so before, but I’ll do so now. . . . The story covers a short period of time (a couple of days) and is told in 200 pages because that’s what it takes to get it told well. The pacing is perfect and the reader (
this
reader, anyway) is left both satisfied with the story as it is and wanting more of the characters and of the world it happens in (exactly the outcome a series writer wants!). . . . Read this book.

Preview of
The Miskatonic Manuscript

This book is for Amy, the first reader, who had faith in the Case Files of Matthew Hunter and Chantal Stevens when few others did.

My first debt of gratitude, of course, is to those who entrusted to me the Case Files of Matthew Hunter and Chantal Stevens, in the first place. The understanding was that I would set before the public some few of their adventures, chosen to demonstrate Matthew’s unorthodox methods, in hopes of encouraging a wider understanding and appreciation of his approach, and thus of the destructive and irrational nature of the persecution of plant helpers in general. Further, the goal was to find cases with aspects that might be of interest not merely to bibliophiles, but also to a more general audience. I have attempted to do that, while remaining mindful of the steward’s judgment at the wedding at Cana.

There were those, undoubtedly with the best intentions, who advised that I should do more to “goose up” these accounts, inserting manufactured car chases, gun battles, last-minute rescues and the like, while “pruning back” the bookish lore.

But Matthew Hunter and his associates are first and foremost tracers and sellers of old and rare books, a field in which I believe we can show there remains adequate drama, without grafting on the plot devices of an old Warner Brothers cartoon.

I have also resisted urgings to lard up this tale with scholarly footnotes. The subject index and bibliography at the rear should provide plenty of opportunity for those who wish to further pursue subjects encountered in Matthew’s adventures.

That said, I would like to acknowledge the generosity of master diagnostician Dr. Michael Petruso, in donating his time and expertise to discuss with me the possibility that a victim of crucifixion could seem to be recovering from his wounds, yet still succumb even after a period of days or weeks (though any medical errors in this book are mine alone.)

I should also like to thank that old shooter (and rigorous journalist) A.D. Hopkins, for his discussion of the true dimensions of the British .303 round (though any ballistic errors in this book are mine alone.)

Bob Beers has been selfless with his time as our volunteer webmaster, and manfully struggled through an early draft to deliver a detailed critique. Mama Susan Callaway was also a helpful early reader.

Carl “Bear” Bussjaeger went beyond the call of duty in designing our glorious dust jacket, based on a painting by Matthias Stom, c. 1600–1652.

Leo Behnke of The Book Group, Las Vegas, did yeoman work on the page design.

Mary Ann Sorrentino offered vital and timely help in making sure the Penitente gang wouldn’t sound like they learned their Italian at Berlitz last week . . . though any linguistic errors are mine alone.

Phil DeFlumear has educated many of us on the finer points of bookmanship. Once you’ve gone online and bought a few “1818” Frankensteins, or “Scribner’s 1925” Great Gatsbys — and received only jacketless 1970s reprints — you can come to appreciate what a real bookman is, and why we should all be thankful that a few still struggle to uphold the standards of the trade.

My thanks to Thomas B. Roberts of Northern Illinois University, editor of
Psychoactive Sacramentals / Essays on Entheogens and Religion
, for sending me an inscribed copy years ago, which I did finally get around to reading, and am happy to heartily recommend, here.

I must be getting old. How are we to repay our debts of gratitude to those who have gone on ahead? I believe my old friend Les Daniels, creator of the “Mind-Rot” column in
The Providence Eagle
, who often invited me to “drink deep of the purple prose that is Providence,” would have enjoyed my attempts to sketch the idiosyncrasies of the gang at Books on Benefit. Though of course, none of the characters or business enterprises in this book are based on real individuals, living or dead. . .

We lost Sasha Shulgin, this year. He started out a brilliant chemist, but in the time I knew him he was also kindly, patient, thoughtful and wise. The movement to recover the wisdom of the sacred plants could not have had a better godfather. A nation whose “authorities” would harass such a giant, rather than honor him, has largely betrayed its early promise of greatness, along with its hollow guarantee of religious freedom.

Finally, I have known some real-life literary detectives. But the first among these was my dad, who once handed me a book by British Bible scholar Hugh Schonfield, called
The Passover Plot
. He could not have guessed where it would lead.

Matthew heard the front door to the shop open behind him, though he could have sworn he’d locked it. A gust of cool air swirled in, followed by an imposing figure in a black cape. He wasn’t more than six-foot-four, which meant technically he shouldn’t have had to duck his head to get in. But he did.

Matthew didn’t know the face, long and square-jawed, though he felt maybe he should. In fact, the first thing that occurred to him was that the Theatre Department had brought in a ringer, some professional curtain-chewer past his prime to play the lead in the latest student production of “Dracula,” since the casting of some pimply undergraduate with a voice not yet settled was the standard Achilles heel of such offerings.

“Your unfortunate employee. You have my condolences. Natural causes, I believe?”

The giant had the deep, resonant voice to match his stature, and spoke precise British English — upper class British English, though he was actually Mediterranean. The family had retained the best of tutors.

“There was some kind of event here a few evenings ago. I don’t know all the details myself, Mr. . . .”

“You have a certain book, Mr. Hunter.” He really did have that James Earl Jones kind of voice, would probably have sounded just as great reading
Green Eggs and Ham
, or the advertising copy off the back of some cereal box. “Your employee took delivery of this book several days ago, perhaps even the day he died, which I do regret. I represent a buyer who is willing to pay a substantial price for this book. Discreetly, of course. Whatever the Californian with his mail-order Divinity degree is offering, I assure you my employer can do better.”

“What book are we talking about?”

“It’s not necessary to be coy, Mr. Hunter. You understand my employer is willing to deal in cash, if you prefer. Reporting transactions to your revenue authorities, that sort of detail, is of no interest to him. Nor can we be made to answer any questions about such a transaction. Diplomatic immunity, you understand. . . .”

“You have the advantage of me, Mr. . . . Penitente? I’ve been away for more than a week. If this book arrived here in the meantime, I’m not aware of it. You’ll have to give us a week or so to get back up to speed. At that point, we’ll see if Robert left us any record. Although I have to tell you books that come in here get priced and put on the shelves, they don’t go in the computer unless we’re listing them for sale online, which depends on a number of factors. The easiest way to find out if we have it is to just leave me the author and title. . . .”

“You’ve dealt in the past, I believe, with Mr. Rashid al-Adar.”

“Look, sir, I don’t want to be impolite, but we’re closed. I have people coming from the funeral. So unless you can tell me exactly what it is you want, I’ll have to ask you to come back when we’re open.”

“Mr. al-Adar brought a book here. He brought it to your late associate. He wanted you to sell the book for him. I want to buy it.”

“In that case, if such a book turns up, I’ll get in touch with Mr. al-Adar to find out his instructions for a sale. Then I’d be glad to contact you. You have a card, something with a phone number or an e-mail address?”

“I do.” The dapper giant produced a glossy white business card, in raised type so it felt like braille when you rubbed your thumb across it, mysterious for the absence of the usual corporate name and logo, but elegant.