Read The Thing About Thugs Online

The Thing About Thugs 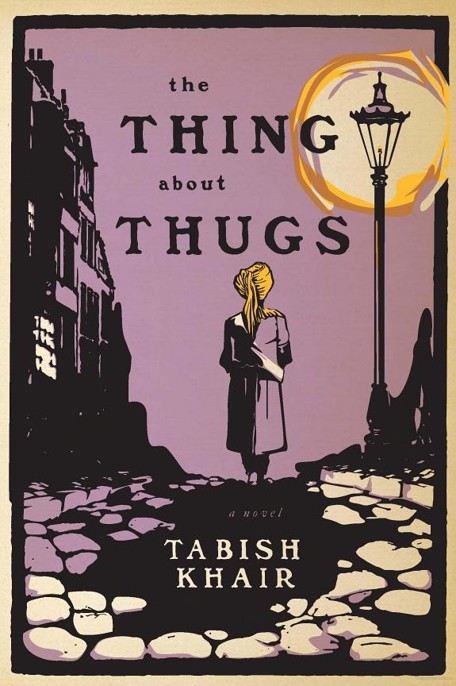 First published in India by HarperCollins in 2010

In memory of Anny Ø. Jensen
and

Because stories outlive us.

‘...since history has devoted
Just a few lines to you, I had more freedom
To fashion you in my mind’s eye...’

‘The man who stood in front of me in that hospital room was a fine specimen of the Asiatic type: compactly-built, of average height, with dark brown hair and limpid mascara-touched eyes. He had a sharp moustache and wore a loose turban; he was dressed in an embroidered kurtah and pyjama, both rather dirty, and he was barefoot, either because he did not wear slippers or because he had taken them off, as is the custom in these parts, before entering the building. He obviously belonged to one of the higher castes, for his complexion was almost fair; he might even have passed for an Italian back home. But this man was no child of the Enlightenment. No, the deities he worshipped were different. His religion was terror; his goddess was terrible. From his cradle, he had been brought up to rob and murder and terrorise. In front of me there finally stood, gentle reader, that most dreaded of men in India, that relentless practitioner of terror and murder and deceit, a Thug.’

—William T. Meadows,
Notes on a Thug: Character and Circumstances,
1840

‘But, Mousie, thou art no thy lane
In proving foresight may be vain:
The best laid schemes o’ mice an’ men
Gang aft a-gley...’

Ghosts are said to be white. Like the house in which this story began: like all stories, this too began elsewhere. It began in a house with a driveway of reddish pebbles, beds of stricken roses, groves of sour oranges and lush mangoes; a ghostly white house in Phansa.

Phansa is a wretched little town in Bihar, an ancient town. It is mentioned in the Puranas, which makes it older than Jesus but by no means as famous. Like all ancient towns, it is filled — no, not with temples, or mosques, or forts: it is filled with stories.

The whitewashed house is also old and it, too, is full of stories. What else but shadows and stories? For shadows accrete to stories as surely as stories emerge from shadows.

There are stories outside that house too. You can feel them in the narrow paths, winding between the neglected rose bushes and seasonal dahlias, lilies, chrysanthemums, which stretch along one side of the house; in the driveway covered with red stones; in the grove of fruit trees behind: mango, guava, orange, pomegranate; in the towering jackfruit tree, the neem, and among the nameless bushes that have been poaching, growing, growing back over the years. But it is the stories inside the house that concern me here. It is these stories, trapped in a house whose live shadows are gradually slipping away unnarrated, that reach out their bony fingers and touch a face or two across a century, whisper with the ghostly voices (real or fraudulent?) of another place.

The whitewashed house belonged to my grandfather, who has been dead for many years. My grandmother lived in it, refusing to move into the more modern homes of her two sons and three daughters. She lived on the second floor, almost the last of the live shadows still inhabiting the house. The ground floor was kept locked. In particular, one damp, shady room in a corner, with a peeling veranda of its own. Not only did the doors to this room bear heavy rusted padlocks, but the two dozen wooden cabinets inside were locked as well.

When my grandmother was in a good mood, and if she felt that a visiting grandchild deserved it, she would walk down the stairs with a bunch of metal keys jangling like bangles, and with painstaking care unlock the cabinets. They had glass panels. Inside, there were books, protected by white mothballs in small perforated plastic bags. Books in Urdu, Arabic, Persian, Hindi and English. My grandfather, it was often recounted, had not just been a doctor; he loved to read and tell stories.

I was the grandchild rumoured to have inherited his love of stories. This was strange, for I lacked most of his languages, which had been reduced to shadows in the glare that the English language cast on my generation. I had the cabinets unlocked for me time and again, over the years. It was there that I first read rumours of the story I will tell you in these pages, while a gecko clicked on a wall, a moth butted its head against the false sky of the windowpane, and the antique ceiling fan chattered and sighed in turns.

Yes, in those cabinets, in their dark corners, in the fingerprints of dust on the shelves, in the scuttle of sly silverfish, in the brittle paper of those books singed by time.

Not all the books, for I knew no Arabic and I was lazy with the Persian and Urdu that I was taught outside school hours. My school taught us only English, and some grudging Hindi.

As the Hindi books in my grandfather’s library were few and pedantic, it was mostly the English books that I read. Russian and French classics in translation, and the Bröntes, Austen, Collins, Dickens, Kipling, Conrad. And then stranger books, like Taylor’s
Confessions of a Thug,
William T. Meadows’
Notes on a Thug: Character and Circumstances,
Wells’
How to Read Character,
and Mayhew’s voluminous accounts of the London poor, which neither I nor anyone else in Phansa had ever heard of.

I think it was in the pages of one of these books that I found the handwritten Persian notes which, once I had deciphered them with some difficulty and assistance, gave me the first piece of the jigsaw that I have tried to assemble in this book. And it was in another of these books that I found the yellowed cutting from a London newspaper announcing the disappearance and presumed death of Lord Batterstone, during a voyage to Africa. It was wrapped in a pamphlet announcing the seemingly unrelated murder by decapitation of a ‘Creole or Gypsy’ woman in a place called Spitalfields that no one in Phansa could place on any map.

This is what the clipping said:

We have also this week to publish, with feelings of regret and sympathy, the news of Lord Batterstone’s untimely demise. Lord Batterstone, a renowned scholar of the phrenological science, was last seen on the deck of SS
Good Hope
, when it was caught in a sudden squall only a few hours from sighting land off the vernal coasts of the Congo. In the 57th year of his age, and leading a private expedition of exploration into darkest Africa, His Lordship is most deservedly regretted by his peers, and deeply lamented by his relations and friends.

The rest of this novelized history comes from other volumes in the library, from Dickens and Mayhew and (much later, in other libraries) from more recent books by Rozina Visram, Judith Flanders, Peter Akroyd, Jerry White, Michael Moorcock, S.I. Martin and others. Sometimes, though not often, the locks on the past can be opened with keys that lie buried in the present.

As for the notes, written by hand on stiff, parchment-like paper, in Farsi, over a hundred years ago by someone called Amir Ali, how can I explain their presence in my grandfather’s library? Were they inherited, or were they collected? For, my grandfather collected manuscripts and artefacts like so many other men of his generation and class. And how did the notes, written by someone so far away — in London in the first half of the nineteenth century — find their way back to a private library in the region of origin of their writer?

The notes, of course, were not sufficient. Notes never are. I had to fill many gaps in them. I also had to fill the gaps between the notes — with voices that, surprisingly, I found to hand.

You might ask, as you may also ask about the provenance of the notes, are these voices authentic?

How can I answer that question? Neither I nor anyone else has heard the voices of England or India in the 1830s. To me, these voices are as authentic as the voices of other characters in books about other places, say, about midnight India in the light of English. Like the authors of those other characters, I write from between texts and spaces, even though I am located in the space of their narration and they in mine. Our mutual commerce runs in opposite directions — and hence, perhaps, your doubts about my authenticity. I accept your doubts with a doubtful smile. And I answer: whether authentic or not, these voices are true. For, in a very basic sense, any story worth retelling is a true story.

It is the ghost of a true story that I tell in these once white pages.

‘You ask me, sahib, for an account of my life; my relation of it will be understood by you, as you are acquainted with the peculiar habits of my countrymen; and if, as you say, you intend it for the information of your own, I have no hesitation in relating the whole...’

Perhaps it is a tattered shirt hanging from a nail hammered into the cracked windowpane. Or a window curtain, ragged, netting the dregs of the light which, dying a lingering death all day, still manages to creep into the room from the grimy court in a corner of the rookery, at this late hour.

The man reclines across a sagging bedstead. He is dressed in expensive clothes, or clothes that seem expensive in this tawdry room. Also lying (dressed in shabbier clothes of varying cut) are a Chinaman, a lascar with a long, white beard and a haggard woman. The first two are asleep, or only half awake, as if in a stupor, while the woman is blowing at a kind of pipe, trying to kindle it. She shades it with her bony hand, concentrating her breath on its red spark of light that serves as a lamp in the falling night, to show us what we see of her face. It is wizened and wrinkled, an old woman’s face, though her body has the agility of someone younger. Her hair is matted and clumpy, as if under it the bone was uneven and indented. A sweet, sickly smell pervades the room.

‘Another?’ says the woman in a rattling whisper, extending her pipe towards the men. ‘Have ’nother?’

The well-dressed man stirs slightly, and makes a gesture of repugnance.

The woman laughs and lazily retracts the pipe. She pulls at it herself.

‘He’ll come to it’, she says to the Chinaman and the lascar, who show no sign of hearing her. Always does. I sees his kind coming here, angry-like, and I ses to my poor self, I’ll get ’nother ready for him, for there’s a gentleman. Not like you lot, no better’n me you are, though I’as nothing ginst you. A few years in dust and smoke and toil and who can tell yer skin from mine? Ha. But he’s a gentleman. He’ll remember like a good soul, won’t ye, sir, that the market price is dreffle high just now. And I makes my pipes from old penny ink-bottles, ye see, dearies — with me own two hands — and I fits in a mouthpiece, all clean, sir — see, like this — and I takes my mixter out of this thimble with a little silver horn... Not every place is like this, sir. I sets the pipe going myself, with me own breath, like this, see... Here y’are...’