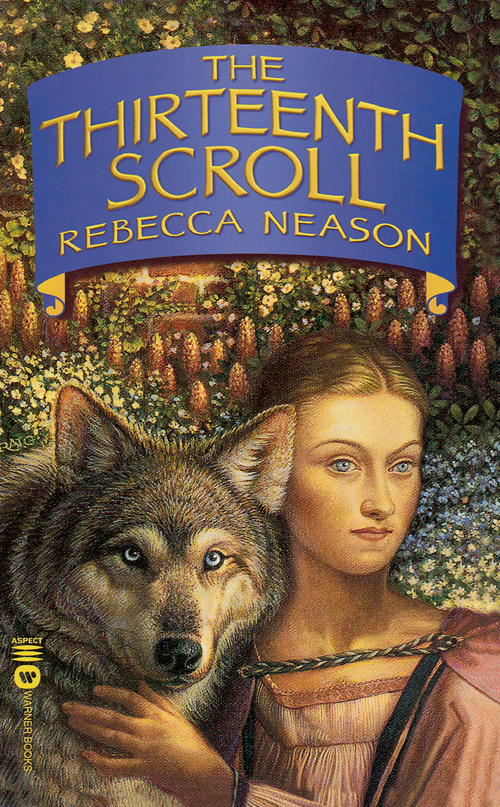 A COMPANY OF FRIENDS

Talog was warming toward his companions, especially the healer Lysandra. She had the Hand of the Divine upon her—even if she
knew it not.

It was part of his training as a Guide to read the clues others revealed about themselves. Many things about his companions
still puzzled him, however. Why were Renan and Lysandra not Joined—because she was a healer? Little as he knew about Upworlders,
it was plain that they had the same feelings for each other that meant a male and female of the Cryf would go to the Guide
to say the words of Joining.

But Renan and Lysandra each tried to hide their feelings from the other. To Talog, it made no sense.

A COMPANY OF FRIENDS

This book is dedicated

Who instilled within all her family

a deep and abiding love for the written word,

and who was truly

193rd year in the reign of the Line of Baoghil

Ruling House of the Eighth Province, Kingdom of Aghamore

O
ld King Osaze was dead, only a month dead, and already the kingdom of Aghamore was near to erupting in violence. The King
had left no bodily issue to inherit the crown, and now each of the Barons who ruled the eight outer provinces thought himself
the best allied—by family and wealth or by strength and greed—to lay claim to the throne.

The Church, whose power in Aghamore rivaled that of the Barons, supported the late King’s nephew, Anri. But the people thought
Anri too young and untried, not a leader to inspire confidence or imbue the kingdom with an aura of strength in the minds
of their enemies. Yet even he was preferred to the threat of civil war.

The Barons knew Anri for what he was—greedy in his tastes, perverse in his pleasures, and interested in the throne of Aghamore
only for the riches it could provide. Unlike the people, the Barons thought civil war was preferable to Anri.

The specter of that threat hung like a shadowed veil across the kingdom. As the throne remained unfilled, the people of Aghamore
looked with desperation to the Church, praying that it would find the means to exercise
its authority in the matter of the succession and control the Barons’ predilection for war.

It was, therefore, on Ballinrigh, Aghamore’s capital, that the eyes and the hearts of the kingdom were fixed.

In that great city, the law of the land still held sway and the people still walked the streets in safety, going about their
daily business while waiting to see which way the winds of change would blow. But such was not true away from the larger cities.
All through the eight provinces that encircled Urlar, Aghamore’s central province, bands of soldiers roamed through towns
and villages, sought out hamlets and farms, conscripting every able-bodied young man into service of the Barons. Rather than
be pressed into the army and forced to fight a war no one but the Barons wanted, many men fled from their homes to hide out
in the forests and hills until the dangers of the conscription gangs—or the war—had passed.

With the law’s attention focused elsewhere and so many men either in the army or in hiding, outlaws were growing in numbers
and boldness. They marauded unchecked, taking whatever they wanted wherever they found it.

In the Fifth Province of Camlough, in the once-prosperous town of Scorda, Lysandra lay on her bed sobbing, crying with all
the passion of her seventeen-year-old heart. Her mother sat next to her, trying to give her comfort. But Lysandra wanted none.
She wanted life as she had planned it.

“You can’t ask Ultan to stay,” her mother said gently. “Not when the conscription gangs have reached Lamford already. They
could ride into Scorda any day.”

“But why now?” Lysandra still sobbed. “Our wedding is only a week away. It’s not fair.”

Her mother’s low chuckle made Lysandra furious. She sat up quickly, trying to glare—but her blue eyes were
too swollen and red. Her puffy, tear-streaked cheeks made her look like a cross and fretful child.

“Oh, Lysandra,” her mother said, reaching out to softly wipe away the tears that still lingered on her cheek, “no one, in
any place or at any time, has ever said life was going to be fair. Life isn’t
fair
—life simply
is
.”

“No, Lysandra,” she continued, taking her daughter’s hands into her own, “you’re not a child anymore to think life must behave
a certain way just because you wish it so. Life comes when and as it will, and we—especially we women—must make the best of
it, without ever giving up hope that all will eventually be well.”

There was scant comfort in her mother’s words, but there was truth and, still heart-sore, she slowly nodded. Her mother gave
her a smile and brought a handkerchief out of her apron pocket to dry Lysandra’s eyes.

“That’s better,” she said, her tone turning brisk and matter-of-fact, a tone Lysandra knew well. “Now go splash some cold
water on your face and comb your hair. Go to Ultan as a strong, courageous woman. Show him that he can leave here knowing
that you will be all right until he returns.”

Lysandra blew her nose. “Where will he go?” she asked.

“Well, if he leaves now,” her mother replied, “he will have time to join with the other men who are going into the Great Forest—as
so many have already. I swear Scorda will be a sad and empty place with so many gone. But”—she sighed—“better they go like
this, on their own terms, than be forced away.”

The net under which Lysandra had so neatly bound her hair this morning was hopelessly askew. She yanked it off and with quick
fingers, gathered her wheat-colored
hair back into a single braid that fell nearly to her waist. Then Lysandra’s mother pulled her into a quick hug.

“I promise you, Lysandra,” she said, “all this will pass more quickly than you think. You and Ultan have a long life ahead
of you—and it will be made all the sweeter because of your separation now.”

The smile Lysandra gave her mother was still forced and a little crooked, but, at least for now, her tears were spent. There
were more tears to be shed, but they would wait until after Ultan had departed.

“Do you know where he is?” she asked, her voice still wavering slightly.

“He’s with your father down at the stables. Your father’s lending him one of the packhorses—but I know he’s waiting for you.”

Lysandra nodded as she took a deep breath. Then, giving her mother one more quick embrace, she left their home in the back
of her father’s wool-and-dye shop and headed for the stables that served this part of the town.

She gave barely a glance to the long, twisted ropes of brightly dyed wool that hung in the shop’s window, nor did she stop
to look at the other shops as she passed. The weaver next door, with the lengths of beautiful cloth; the seamstress’s window,
full of coats and dresses; the cobbler’s shop, with the giant wooden boot over the door; and, across the street, the ironwright’s
shop, standing next to the silversmith’s whose window display of platters and goblets, buckles and jewelry always caught the
morning sun—all those and more were as familiar to Lysandra as her own home. She gave them no more thought than she did the
sound of neighbors’ voices or the playful barking of some of the town’s dogs. Her mind was filled with only one thought—
Ultan
.

She walked briskly, her mind so busy with thoughts of
him that at first she paid no heed to how the noise behind her had changed. Dogs now barked fiercely and over them, Lysandra
heard the sound of galloping hooves—far too many to be a casual ride.

Her first thought was of the conscription gangs. She started to run.
I’ve got to get to Ultan
, her thoughts now came in a whirl, matching the rhythm of her feet.
Tell him to get away. It’s my fault—he should have gone yesterday or last week… he only stayed for me
…

She threw a glance over her shoulder. Just then, the first scream hit her ears. Lysandra’s stomach contracted in true fear—for
this was no conscription gang. These riders, at least twenty strong, rode behind the most dreaded man in the province, perhaps
in the kingdom.

They rode with Black Bryan.

Black Bryan was a bull of a man, with coal-dark hair and eyes to match. It was said that he used to be a blacksmith until
ruinous taxes had claimed his smithy. Having lost his means of honest living, he now took what he wanted. The law had been
after his gang for more than five years, but they remained elusive and unstoppable.

And now into Scorda they rode, knowing they could take what they wanted and caring nothing for the screams or the lives of
those in their way.

Black Bryan stayed on his horse while his men fanned out in search of plunder, some on horseback, some already pushing their
way into shops and houses. Lysandra saw all this in a scant moment. Her one thought was to reach the stables, now closer than
her home. If she could get to Ultan and her father, she might be safe.

The air around her rang with the wails of children and the screams of women. Such violence was inconceivable in this town,
this place filled with her childhood memories
of sunlight and laughter.
This cannot be real
, her mind cried.

But it was. Lysandra heard the hoofbeats. They were close—too close. Her heart was pounding more wildly than the horses’ hooves,
pounding with the fear of an only half-recognized premonition, as she slipped into a small alleyway to hide. But it was too
late; she had been seen. She was trapped with no way to escape the four men who had leapt down from their horses and were
closing in upon her. Their eyes shone with a light that left Lysandra little doubt of their intent.

“No,” she heard herself say as she slowly backed away. “No, please—let me go.”

The men kept coming. One of them laughed. “She’s a pretty one, don’t you think, m’lads?” he said.

“Aye, right fair—and ripe for the pickin’ too.”