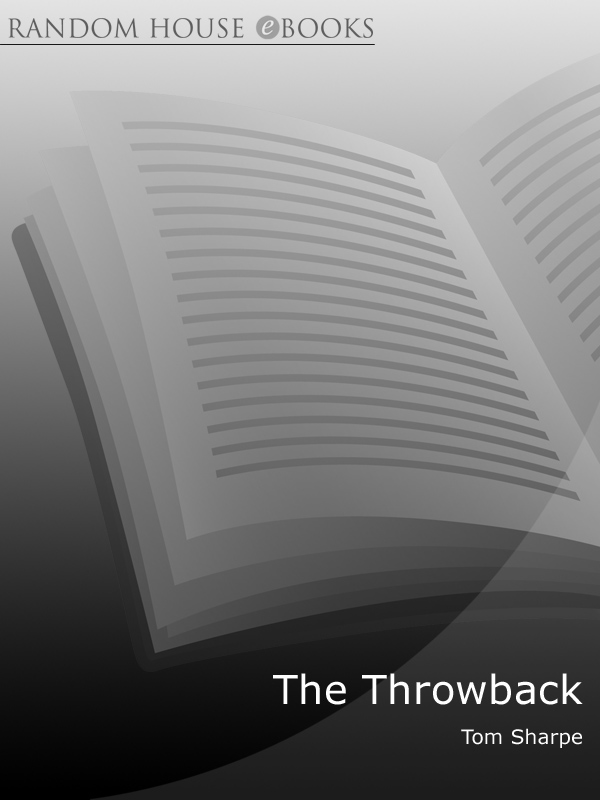 Tom Sharpe was born in 1928 and educated at Lancing College and Pembroke College, Cambridge. He did his national service in the Marines before going to South Africa in 1951, where he did social work before teaching in Natal. He had a photographic studio in Pietermaritzburg from 1957 until 1961, and from 1963 to 1972 he was a lecturer in History at the Cambridge College of Arts and Technology.

He is the author of sixteen novels, including
Porterhouse Blue
and
Blott on the Landscape
which were serialised on television, and
Wilt
which was made into a film. In 1986 he was awarded the XXIIIème Grand Prix de l’Humour Noir Xavier Forneret and in 2010 he received the inaugural BBK La Risa de Bilbao Prize. Tom Sharpe died in 2013.

It could be said of Lockhart Flawse when he carried his bride, Jessica,
née
Sandicott, across the threshold of 12 Sandicott Crescent, East Pursley, Surrey, that he was entering into married life with as little preparedness for its hazards and happiness as he had entered the world at five past seven on Monday, 6 September 1956, promptly killing his mother in the process. Since Miss Flawse had steadfastly refused to name his father even on the stinging nettles that composed her deathbed and had spent the hour of his delivery and her departure alternately wailing and shouting ‘Great Scot!’, it had devolved upon his grandfather to name the infant Lockhart after the great Scott’s biographer and, at some risk to his own reputation, to allow Lockhart to assume the surname Flawse for the time being.

From that moment Lockhart had been allowed to assume nothing, not even a birth certificate. Old Mr Flawse had seen to that. If his daughter had been so obviously devoid of social discretion as to give birth to a bastard under a drystone wall while out cub-hunting, which drystone wall her horse had, more sensibly than she, refused, Mr Flawse was determined to ensure that his grandson grew up with none of his mother’s faults.
He had succeeded. At eighteen Lockhart knew as little about sex as his mother had known or cared about contraception. His life had been spent under the care of several housekeepers and later half a dozen tutors, the former chosen for their willingness to endure the bed and board of old Mr Flawse, and the latter for their other-worldliness.

Since Flawse Hall was situated on Flawse Fell close under Flawse Rigg some seventeen miles from the nearest town and on the bleakest expanse of moorland north of the Roman Wall, only the most desperate of housekeepers and other-worldly of tutors accepted the situation for long. There were other rigours than the natural. Mr Flawse was an extremely irritable man and the succession of tutors who had provided Lockhart with the most particular of general educations had done so under the strict proviso that Ovid was not to be included among the classics and that literature was to be dispensed with entirely.

Lockhart was to be taught the ancient virtues and mathemathics. Mr Flawse was particularly hot on mathematics and believed in numbers as ferociously as his forefathers had believed in predestination and cattle-rustling. They formed in his opinion a firm foundation for a commercial career and were as entirely without obvious sexual connotations as were the features of his housekeepers. Since tutors, and other-worldly tutors at that, seldom combined a knowledge of both maths and the classics, Lockhart’s education proceeded by fits and
starts but was sufficiently thorough to defeat every attempt by the Local Authorities to provide him with a more orthodox schooling at public expense. The School Inspectors who ventured to Flawse Hall to obtain evidence that Lockhart’s education was deficient came away confounded by his narrow erudition. They were unused to small boys who could recite their nineteen-times table in Latin and read the Old Testament in Urdu. They were also unused to conducting examinations in the presence of an old man who appeared to be toying with the trigger of an ostentatiously loaded shotgun aimed absent-mindedly in their direction. In the circumstances they felt that Lockhart Flawse, while hardly in safe hands, was educationally in excellent ones and that there was nothing to be gained, except in all probability a volley of buckshot, by attempting to take him into public care, a point of view that was shared by his tutors, who came less frequently with every passing year.

Mr Flawse made good their absence by teaching Lockhart himself. Born in 1887 at the height of the Empire, he still held those tenets to be true which had been commonplace in his youth. The British were the finest specimens of animal life that God and Nature had created. The Empire was still the greatest that had ever existed. Wogs began at Calais, and sex was necessary for procreation but was otherwise unmentionable and generally disgusting. The fact that the Empire had long since ceased to exist and that wogs, far from beginning at Calais, had reversed the process and in large measure
ended at Dover, Mr Flawse ignored. He took no newspaper and, lacking any electricity at Flawse Hall, used this as an excuse for refusing to have even a transistor radio, let alone a television set, in the house. Sex, on the other hand, he couldn’t ignore. Even at ninety he was consumed by guilt at his own excesses and the fact that these, like the Empire, had largely passed from reality to fantasy only made matters worse. In his mind Mr Flawse remained a profligate and maintained a regimen of cold baths and long walks to exercise his body and exorcize his soul. He also hunted and fished and shot and encouraged his bastard grandson in these healthy outdoor pursuits to the point where Lockhart could bring down a running hare at five hundred yards with a First World War .303 Lee-Enfield and a grouse at a hundred with a .22. By the time he was seventeen Lockhart had so decimated the wildlife on Flawse Fell and the fish in the North Teen that even the foxes, carefully preserved from relatively painless death by gunshot to be hunted and torn to pieces by the hounds, found it difficult to make ends meet, and brought meets to an end by moving off to less exacting moors. It was largely in consequence of this migration, which coincided with the departure of his latest and most desirable housekeeper, that old Mr Flawse, resorting too heavily to the port bottle and the literary companionship of Carlyle, was urged by his personal physician, Dr Magrew, to take a holiday. The doctor was supported by Mr Bullstrode, the solicitor, at one of the monthly dinners at Flawse Hall which the old
man had given for thirty years and which allowed him a forum for those vociferous disputations on things eternal, metaphysical, biological and generally slanderous. These dinners were his substitute for church attendance, and his arguments afterwards were his nearest approach to any recognizable religion.

‘Damned if I will,’ he said when Dr Magrew first mooted the idea of a holiday. ‘And the fool who first said a change is as good as a rest didn’t live in this benighted century.’

Dr Magrew helped himself to more port. ‘You can’t live in an unheated house without a housekeeper and expect to last another winter.’

‘I’ve got Dodd and the bastard to look after me. And the house isn’t unheated. There’s coal in the drift mine up Slimeburn and Dodd brings it down. The bastard does the cooking.’

‘And that’s another thing,’ said Dr Magrew, who rather suspected that Lockhart had cooked their dinner, ‘your digestion won’t stand the strain and you can’t expect to keep the boy cooped up here for ever. It’s time he saw something of the world.’

‘Not till I find out who his father is,’ said Mr Flawse malevolently. ‘And when I do I’ll horsewhip the swine to within an inch of his life.’

‘You’ll not be fit to horsewhip anyone unless you take our advice,’ said Dr Magrew. ‘Isn’t that your opinion, Bullstrode?’

‘Speaking as your friend and legal adviser,’ said Mr
Bullstrode, glowing in the candlelight, ‘I would say that I would regret the premature ending of these pleasant occasions by virtue of an obstinate disregard for the weather and our advice. You’re not a young man and the question of your will …’

‘Damn my will, sir,’ said old Mr Flawse, ‘I’ll make a will when I know whom I’m settling my money on and not before. And what is this advice you offer so readily?’

Mr Flawse stared into the depths of the decanter and considered the proposition. There was something in what his friends advised and besides there had recently been complaints from several tenant farmers that Lockhart, lacking any more fleet-footed quarry, had taken to pot-shooting sheep at fifteen hundred yards, complaints that had been confirmed by Lockhart’s cuisine. They had had underdone mutton too frequently of late for Mr Flawse’s digestion and conscience, and besides Lockhart was eighteen and it was high time he got shot of the lad before someone got shot by him. As if to reinforce this opinion there came the sound from the kitchen of Mr Dott’s Northumbrian pipes playing a melancholy air while Lockhart sat opposite him listening, just as he listened to Mr Dodd’s stories of the grand old days and the best way to poach pheasant or tickle trout.

That night a heavy fall of snow decided him, and Dr Magrew and Mr Bullstrode came down to breakfast to find him in a more amenable mood.

‘I’ll leave the arrangements to you, Bullstrode,’ he said as he finished his coffee and lit a blackened pipe. ‘And the bastard will go with me.’

‘He’ll need a birth certificate to get a passport,’ said the solicitor, ‘and …’

‘Born in a ditch and die in a dyke. I’ll only register him when I know who his father is,’ said Mr Flawse, glowering.

‘Quite,’ said Mr Bullstrode, who didn’t want to go into the question of horsewhipping so early in the morning. ‘I suppose we could still have him put on your passport.’

‘Not as his father,’ snarled Mr Flawse, the depths of whose feelings for his grandson were partly to be explained by the terrible suspicion that he himself might not altogether be devoid of responsibility for Lockhart’s conception. The memory of one drunken encounter with a housekeeper who had seemed on recollection to have been younger and more resistant than her daytime appearance had led him to expect still haunted his conscience. ‘Not as his father.’

‘As his grandfather,’ said Mr Bullstrode. ‘I’ll need a photograph.’

Mr Flawse went through to his study, rummaged in a bureau drawer and returned with one of Lockhart aged ten. Mr Bullstrode studied it dubiously.

‘He’s changed a lot since then,’ he said.

‘Not to my knowledge,’ said Mr Flawse, ‘and I should know. He was ever a gormless lout.’

‘Aye, and for all practical purposes a non-existent one,’ said Dr Magrew. ‘You know he’s not registered on the National Health system, and if he’s ever taken ill I can foresee considerable difficulties in the matter of obtaining treatment.’

‘He’s never known a day’s illness in his life,’ Mr Flawse retorted. ‘A healthier brute it would be difficult to find.’

Candace McCarthy by Sweet Possession
Each Day I Wake: A gripping psychological thriller: US Edition by Seb Kirby
By Its Cover by Donna Leon
Voodoo Love (And the Curse of Jean Lafitte’s Treasure) by Victoria Richards
Alterant by Sherrilyn Kenyon, Dianna Love
Almost Too Far (Almost Bad Boys #3) by Peart, A.O.
Falling (The Soul Collectors Series Book 1) by Tara Benham
Just Between Us by J.J. Scotts
The Z Word (A Zombie Novel) by Shaun Whittington
Dragon Heat 1 - Dead Sexy Dragon by Lolita Lopez