Read The Triumph of Grace Online 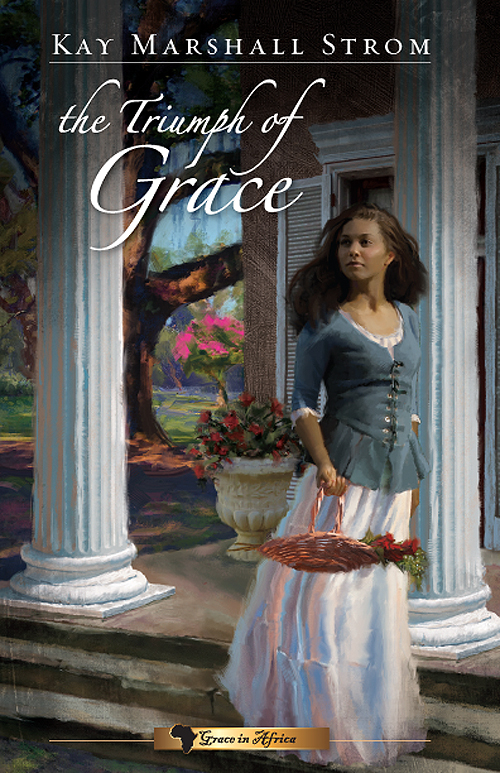 Everyone should read
The Triumph of Grace
by Kay Marshall Strom for an inspiring and exhilarating journey to freedom.Kay draws us into a historical moment for slavery and emancipation through the evolution of key characters—slaves, owners, freedom advocates, historical figures, and humble Quakers. Your heart will pound for the perils of enslaved Grace Winslow. And you will yearn for her freedom and for all who know a similar plight. If you want to know what it takes to free the slaves of today, you can glimpse the key components of God's sovereign workings in
The Triumph of Grace.

—Michele Rickett, president of Sisters In Service and coauthor of
Forgotten Girls
with Kay Marshall Strom

No part of this publication may be reproduced in any form,stored in any retrieval system, posted on any website,or transmitted in any form or by any means—digital,electronic, scanning, photocopy, recording, or otherwise—without written permission from the publisher, except for brief quotations in printed reviews and articles.

The persons and events portrayed in this work of fiction are the creations of the author, and any resemblance to persons living or dead is purely coincidental.

Scripture quotations are from the King James or Authorized Version of the Bible.

I dedicate this book to the memory of millions

of Africans whose lives weredestroyed by

and to the men and women who fought to bring

the wretched practice to an end.

May we dedicate ourselves to see a time when

slavery is no moreon this earth.

My grateful thanks to the many people who helped make this book possible.

Thank you especially to Rene Mbongo in Senegal

and Raymond Peel in England

for helping me bring West Africa and London to life.

A special thank-you to my editor, Barbara Scott, who

refused to echo others who shrugged and said,

and to my agent, Janet Grant, who

worked out all the details.

Thank you, Jo Jeanne, for encouraging me

throughout my entire life.

Thank you, Lisa and Eric, for encouraging me

throughout your entire lives.

Kathy Force, you are a great first- line editor.

Thank you so much.

And to my husband, Dan Kline—well,

I am more grateful than words can express.

W
ho is it? Who is out there?" Nurse Hunter demanded.She rushed down the hall of the Foundling Hospital. "Must you knock the door completely off its hinges?"

Even in the best of times, Nurse Hunter was not a patient woman. And now, with her nerves already taxed by two weeks of unrelenting rain, the persistent pounding on the front door pushed her to the point of exasperation. Her characteristic staccato steps clicked through the halls with even more haste than usual.

Grace Winslow paid Nurse Hunter no mind. She extracted another bedsheet from the bundle young Hannah held in her outstretched arms. With an expert hand, Grace stuffed the sheet alongside the soggy heap already jammed into the corner where the dining hall floor connected to the entry hallway.She dropped to her knees and forced the padding firmly into place.

As Nurse Hunter tugged the water-swollen door open, Grace straightened her back. She sighed and brushed a stray lock of auburn-tinged black curls from her dark face, now glossy with sweat. "Whoever you are, do not trail mud over my freshly scrubbed floor," she murmured—but not loud enough for either Nurse Hunter or the newcomer to hear.

A worthy concern it was, too. With the road outside an absolute quagmire of muck, first one person and then the next tracked the mess inside and down the hallway faster than Grace and the girls could clean it up. Even courteous people carried the foul outside into the building. And whoever it was raising such a row at the door was obviously no courteous person.

"And just where do you fancy yourself taking our help in the middle of the day?" Nurse Hunter demanded. "The children sweat in their beds with the fever, and every corner of this building has sprung a new leak. I'd be a fool to hand our best worker over to you, wouldn't I, now?"

"Takin' her to Newgate Prison, is wot," came the sharp reply. "On orders of Lord Reginald Witherham hisself."

Grace stiffened. Lord Reginald Witherham? Charlotte's husband? An entire year had passed since Grace made her escape from that dreadful man's house! Lord Reginald had been frightfully angry, but so much time had passed. Surely by now—

"And what right does Lord Reginald Witherham have to remove our help from this charitable establishment?" Nurse Hunter demanded, her long, thin arms akimbo on her spare body.

"Grace Winslow be a thief, is wot," the irritated voice replied. "Now, kindly step aside. Elsewise, we be taking you along with her."

A thief!
Grace could not believe what she had heard. She was no such thing! Charlotte would tell them as much. Yes,Lord Reginald's wife knew everything that had happened that day at Larkspur Estate.

A tall burly man in a shabby greatcoat pushed past Nurse Hunter and forced his way into the entry hall. Right behind him was a short man with bushy eyebrows and an overgrown mustache.

The child dropped the bedsheets. She looked uncertainly from Nurse Hunter to Grace to little Phoebe, whose arms were still piled high with folded cloth.

The burly man pointed to Grace and called, "That be her!"

Before Grace could get her wits about her, the men were upon her. The tall burly man held her firmly in his grasp, and the bushy one bound her wrists with a rope.

"It is all a mistake!" Grace protested. "I never stole anything!"

Without bothering to respond, the men shoved her toward the door. Phoebe shrieked and Nurse Hunter scolded, but the men paid no mind. They hustled Grace out into the rain toward a waiting carriage with doors that bore the golden letters

"Here, now!" Nurse Cunningham panted as she ran up behind Hannah. "What is the meaning of this?" When she saw Grace in the grip of the two ruffians, she ordered, "Loosen our servant this instant! I insist!"

Nurse Cunningham might as well have been speaking to the trees.

"We are a charitable house for orphans, sirs!" she exclaimed."Have you no concern for the welfare of poor children?"

The burly man shoved Grace through the open carriage door and hefted himself in beside her. The bushy-faced man scurried up after them, settled himself across from Grace and the large man, and yanked the door shut. Not one word was spoken. Not one word was needed. The driver whipped the horse. The carriage jerked forward and rattled onto the cobblestone street.

Grace tugged herself around in time to see the two women and a clutch of children staring after her. Wide-eyed, they huddled together in the driving rain.

"Save it fer the magistrate," the burly man told her. "It's him wot will hear yer plea."

Grace started to object, but the bushy-faced man glared hard at her and growled through his mustache in such a terrifying way that she closed her mouth and sank back in miserable silence.

A year of schemes and plans. A year of saving every shilling of her pay from the Foundling Hospital. Months of gathering bits and pieces of men's clothes.

"When may I go back to the Foundling Hospital?" Grace ventured.

The burly man barked a sharp guffaw. "The Foundling Hospital, is it, then? Be there a graveyard out back? One with a poor hole, perchance? 'Tis the only way you will be seein' the likes of that place again."

"Should've said yer good-bye's afore the door closed on this carriage," said the small man with the bushy face. His stony voice unnerved Grace. "You won't be seeing them children again. Not in this life."

Grace shivered in her drenched dress and sank further into the seat. Each clomp, clomp, clomp of the horse's hooves was like a hammer driving a spike of despair deeper into her heart.Why now, after all this time? Surely, with his powerful connections, Lord Reginald Witherham could have found her at any time during the year she had worked at the Foundling Hospital. Why now, just when everything was almost ready?

For the past year, at the end of every exhausting day, Grace took off her only dress, laid it over the single chair in her room and slipped into the loose cotton garment Nurse Hunter had given her for sleep. She lay down on her cot and in the darkness carefully traced Cabeto's face in her mind. She recalled its every curve—the laughing tilt of his mouth, the broad shape of his nose, the spark of assurance in his eyes. When her husband was firmly fixed in her memory, she whispered again the promise she had called out to him on that awful day in Africa: "
I will see you again. I promise!"

Unless . . . unless she couldn't get to him in time. One year, Captain Ross had told her. Maybe two. That's how long it would be before whatever slave owner bought Cabeto would likely work him to death.

"Don't you worry yerself about Newgate Prison," the burly man taunted. "Lord Witherham be in such a state, I guar'ntee you won't be lingerin' there fer long."

Mistakes happen. Grace understood that. Misunderstandings occur. If she were in her village in Africa, she and her accuser would simply sit down under the baobab tree—the spirit tree—with the wise old man in the village, and they would all talk together. The wisdom of the ancestors would rise from the spirit tree and fill the mind of the old man, and he would guide the disagreeing sides to a place of understanding.In Africa, the two would walk away in harmony. But this was not Africa. It was London, where no baobab trees grew. Even if a spirit tree did exist in London, it would be lost among the crush of tall buildings and chimneys that clogged the city and church spires that reached to the sky. Nor could the wisdom of the ancestors hope to pierce the unyielding shroud of thick, smoky fog that held London in its relentless grasp.

"Lady Charlotte—I must speak to her!" Grace said.

The burly man burst out in a great guffaw. "You? And what would the likes o' you say to so fine a lady?"

"If you knows anything at all, you knows to shut yer mouth while you still can."

"Exceptin' to beg fer mercy," interrupted the man with the bushy face. "Surely you knows that. Elsewise you be about to gift all London with the pleasure o' watchin' you dance at the end of a hangman's rope."

White Lilies (A Mitchell Sisters Novel) by Christy, Samantha
Lady Mistaken (Le Débauché Club) by Beck, Aubrey
The Block by Treasure Hernandez
Guilt by G. H. Ephron
All in a Don's Day by Mary Beard
High-Caliber Concealer by Bethany Maines
Remember When 2 by T. Torrest
Murder at Almack's: A Regency Romantic Suspense Short Story by Sharon Louise
The Spinster's Secret by Emily Larkin
All Dressed Up and No Place to Haunt by Rose Pressey