Read The Trouble with Faking Online

The Trouble with Faking 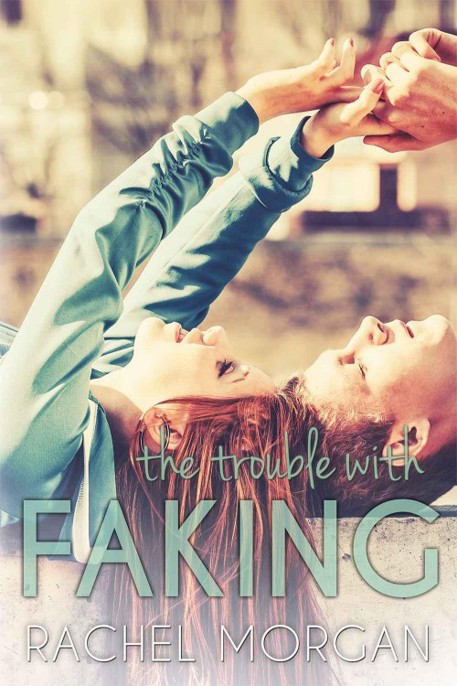 The Trouble with Faking

After a stupid miscommunication, everyone in Andi’s new res thinks she’s secretly dating Damien, boyfriend of resident queen bee Charlotte. Since the rumour’s already out there and refuses to be squashed, Andi and Damien decide to keep up the facade in the hopes of snagging the attention of the people they
really
want to be with.

This is a work of fiction. Names, places, characters, and incidents are either the product of the author’s imagination or, if real, used fictitiously. The author makes no claims to, but instead acknowledges, the trademarked status and trademark owners of the word marks, products, and/or brands mentioned in this work of fiction.

All rights reserved. No part of this book may be reproduced, distributed, or transmitted in any form or by any means without prior written permission from the author, except in the case of brief quotations embodied in critical articles and reviews. For more information please contact the author.

I’ve been in love with the boy next door since I was ten. It’s a cliché, I know, but I couldn’t help it. His family moved into the house next door to ours one sweltering day in January, and I couldn’t take my eyes off the sandy haired boy. Even at twelve, he was handsome.

I sat in the shade in the front garden, pretending to read my book while catching glimpses of him and his parents through the fence. It took me the whole day to work up the courage, but as evening drew closer and the temperature changed from oppressive to almost bearable, I walked next door, introduced myself, and invited him over for a swim. Having an excellent view of their garden from my upstairs bedroom window, I was all too familiar with the current algae-infested state of their swimming pool. And on a day as hot as that one, he couldn’t say no to an invitation like mine, could he?

He didn’t. Damien Sanders accepted my invitation, and we’ve been friends ever since.

Which sucks, of course, because of the part where I’m in love with him.

“Andi, who are you staring at?”

“Hmm? What? I’m not staring.” I tear my gaze from the other side of the vast dining hall where Damien just walked in with two guys. It’s been three days since I moved into my new home—Fuller Hall, Upper Campus, UCT—and I haven’t spoken to him yet. I’ve been busy with orientation stuff, and every time I’ve had a free moment, Damien hasn’t been available. I guess being a sub-warden at Smuts has kept him busy too.

Smuts Hall. The guys’ residence across the parking lot. That’s right. After two years apart, Damien is once again The Boy Next Door.

“You’re definitely staring at someone,” Carmen says as my eyes wander over her shoulder once more. She twists around just as Mike—a guy we met during the awkward Fuller-Smuts icebreaker thing on our first night here—looks over and waves at us. Carmen returns the wave, then looks back at me with a giggle. “Was it him you were checking out?”

“Ha! No.” I take a bite of my burger to avoid elaborating.

“Maybe you
should
be checking him out,” she says, twisting a strand of dark hair around her finger. “Unless,” she adds, eyeing the
I
♥
Mr Darcy
badge pinned to my T-shirt with a grin, “book boyfriends are enough for you?”

I roll my eyes at her. “Maybe
you
should check him out.”

“Well, you know, I would, but guys tend to feel intimidated by me.”

I laugh and nod. My newest friend is taller than almost every guy in this room, and probably smarter too. I can see how guys might find that intimidating.

“Maybe,” she says. “That would certainly make my grandma happy.” A sachet of salt smacks her cheek before landing on her plate. She snaps her head to the side and glares at the table beside ours where a bunch of guys are doubled over with laughter. “Hey, watch it!” she yells. She grabs the salt sachet and chucks it at the guy with the spoon in his hand—the one who obviously flicked the sachet in the first place.

“So, not
that
coloured guy,” I say, trying to suppress a laugh.

“Definitely not. Eish, why do these guys have to share our dining hall with us? Don’t they have their own?”

I shrug. “They do. I don’t know why they don’t use it.” I finish off the last two bites of my burger and look around for Damien. He’s gone. Before I can think about it, I’m on my feet. “I need to go talk to someone quickly,” I tell Carmen. “I’ll be back in a few minutes.”

“I’ll be in my room,” she says, standing with her tray in her hands. “Don’t forget the treasure hunt thing.”

“Yeah, yeah.” I get rid of my tray, then hurry out of the dining hall. Damien’s probably on sub-warden duty or something, and in fifteen minutes I have to be back in Fuller’s upper common room with the rest of the freshers to start some silly treasure hunt, but I can’t let another night pass without at least saying hi to him. I run along the corridor and out of reception. I scan the parking lot between Fuller and Smuts, but I don’t see him. Maybe he never left. Maybe he’s visiting what’s-her-name, his g—

“Hey, Andi!” I look to my left and see Damien standing in the road behind Fuller. He waves, and I run the short distance towards him. I crash into him with a hug, and he winds his arms around me, wrapping me in his deliciously familiar woody, citrusy scent. He isn’t too tall or too short. Not too built or too skinny or too squishy. He’s perfection wrapped around me. “I’ve missed you,” he says. “You and your quirky dress sense.” He steps back and smiles down at my pink polka-dot T-shirt and lime green suspenders. The
I
♥
Mr Darcy
badge is pinned directly over a large white polka dot.

“Well, my quirky dress sense and I have missed you too,” I say with a laugh, tucking loose strands of orange-red hair behind my ear.

“I’ve been wondering when I’d finally see you. They’ve been keeping you busy with O-Week stuff?”

“Yes.” I push my hands into my back shorts pockets. “Faculty orientation during the day, and then res stuff in the evenings. That icebreaker with Smuts, a social with Kopano, high tea with Baxter, and a treasure hunt tonight.”

“They haven’t forced you to hike up a mountain yet?” he asks with a grin. He’s well aware of how terrified I am of heights.

I groan. “That’s coming up on Saturday. Anyway.” I remove one hand from a pocket and touch his arm, because I’m ridiculous and I can’t help myself. “What are you doing out here in the road?”

“Oh, just searching for a flash drive. It was in my pocket earlier, and now it’s gone. I thought it might have fallen out when I was walking along here earlier.”

“Oh. Sorry. I hope it didn’t have anything too important on it.” I look around, hoping I might spot the missing flash drive.

“No, not really. I think I’ve pretty much given up on finding it now. Anyway, you’ve got to get back for your treasure hunt, but once O-Week is over, we must catch up. Just come over to Smuts when you’re free and ask the receptionist to call me.”

“Sure.” I smile as happiness heats up my insides. I know it’s stupid. I know he only thinks of me as a good friend. But part of me always hopes that maybe
now
is the time he’ll start thinking of me as … more. He pulls me into another hug, and my flyaway hair gets stuck in the chain around his neck. And then we’re both laughing again as I try to pull it free, and I’m forcing myself not to think about his face being so close I can feel his breath on my cheek. I tug the strand of hair until it comes loose, then push it over my shoulder.

“Sorry about that,” Damien says. He gives my arm a squeeze and adds, “Have fun tonight.”

I nod, then turn back to Fuller. I’m just about floating as I head through the old wooden doors, but the sight that greets me in reception brings me firmly back to earth.

A girl with perfect brown curls tumbling over her shoulders, arms crossed over her chest, and eyes so furious they may as well be shooting poison watches me from the other side of reception. She steps away from her group of equally furious-looking friends and marches across the foyer towards me.

“Hi,” I say to the girl who looks like she wants to tear my eyes out. “You must be Charlotte. Damien’s told me all about you.” Not that I was interested in hearing anything about his latest girlfriend. “I’m Andi. Damien’s friend.”

“His
friend
? How about secret lover?”

“I
know
he’s been cheating on me. He’s been paying less and less attention to me, and now I find him sneaking around the back of Fuller with his hands all over you.”

“Um, I don’t think that’s what happened.” Despite any wish I might have had to the contrary.

“Charlotte,” I say with as much patience as I can muster. “I am not his secret lover.”

“Don’t lie to me,” she shouts. “My friend saw the two of you together last year.”

“What? Oh, when I flew here for those two days in April? I was visiting my sister. Damien just picked me up from the airport.”

“So it wasn’t you he was sitting on mem stone with?”

“That big block of stone in between Fuller and Smuts!” she yells.

“Oh. Yes, that was me. We chatted for a bit before he dropped me off at my sister’s. You know, just two old friends catching up.”

Romance for Matthew by Fornataro, Nancy
Underground 4 by Janelle Stalder
MIranda's Rights by KyAnn Waters
Second Chances by Phelps, K.L.
A Lesson of Intensity: Season of Desire Part 2 (Seasons Quartet) by Matthews, Sadie
She Wakes by Jack Ketchum
A Child is Torn: Innocence Lost by Kopman Whidden, Dawn
Behind the Moon by Hsu-Ming Teo
Rainbow for Megan by Corrie, Jane
Kidnapped at the Capital by Ron Roy