Read The Truth About Air & Water (Truth in Lies #2) Online 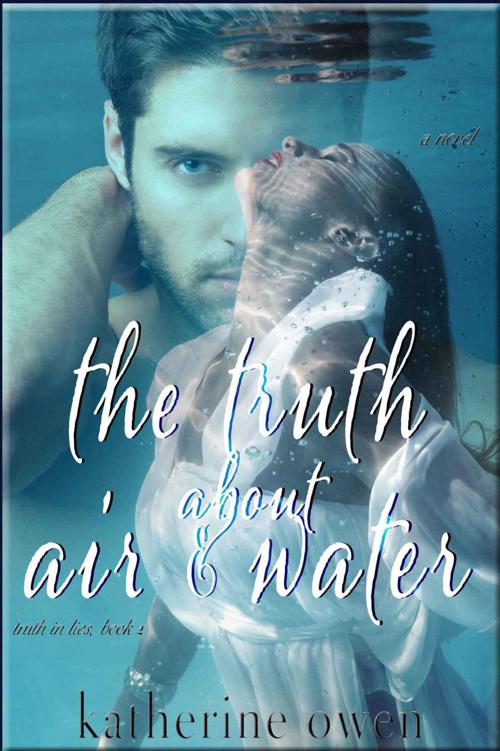 CHAPTER TWO Where I Stood -TALLY

CHAPTER THREE She Is Love -LINC

CHAPTER FOUR Perfect For Me -LINC

CHAPTER FOURTEEN You Belong With Me -TALLY

CHAPTER SIXTEEN Who's That Girl -LINC

CHAPTER EIGHTEEN Wanna Get To Know You -TALLY

CHAPTER TWENTY-TWO It Only Hurts When I'm Breathing -TALLY

CHAPTER THIRTY-TWO Your Body Is A Wonderland -LINC

CHAPTER THIRTY-SEVEN Who Am I To Say -TALLY

CHAPTER THIRTY-NINE You're Still The One -TALLY

Thank you and a request

Other Books By Katherine Owen

Author’s Note:
The Truth About Air & Water
can be read as a standalone novel. However, readers that are fans of my fiction suggest reading
This Much Is True,
the first novel in the
Truth In Lies series
, FIRST. Your choice. Enjoy!

Thanks for believing in the possibilities.
The Truth About Air & Water
is for all of you.

"She wasn't doing a thing that I could see, except standing there, leaning on the balcony railing, holding the universe together."
-J.D. Salinger

'Tis better to have loved and lost,

Than never to have loved at all"
-Lord Alfred Tennyson

“Thirty miles. Forty minutes. Without traffic.” I list off the selling points of the church at Half Moon Bay. I really want this, and I have to hope Linc does too. We have six hours before he has to hit the field again for a late practice and it’s a forty-minute drive one way. I have a rare day off from San Francisco Ballet, so here we are traveling out to Half Moon Bay to check out a place to hold our wedding and reception. I’m anxious. I want him to love the little church I’ve fallen in love with. I’ve already called Pastor Dan Reeve twice but he won’t schedule a date or promise us one until he meets us. A strange enough request. Linc and I finding time together takes quite a bit of maneuvering these days.

“If we don’t hit it off with this minister, we lose out on this place,” I say.

Linc glances over at me. “I know you’re excited about this one but, Tally, we’re already booked at Hollins House for mid-October. It’ll hold everybody. My dad sent over a more complete list a few days ago. I think he’s just invited all the people who attended my mom’s funeral years ago and there are a lot of names to add to the guest list.”

“He’s really nice. I think you’ll like him. All he wants is to meet us first.”

“That’s pretty demanding though, right? He won’t even give you the open dates the place has until he meets us? I don’t like it. Hollins House is good to go and we really can’t spend any more time on this, babe.”

I let the babe comment slide. He knows I hate that endearment which is too similar to baby, which I really despise.

“I’m unclear as to why we have to invite four hundred and fifty people I do not know to our wedding.
That
limits our options.” I bite my lip from saying more about that.

Linc’s dad has become a major problem for us and every guest he adds skyrockets the cost and there’s no offer from him to cover those. My parents are rightfully freaking out. Linc remains somewhat oblivious to it all because really it’s the middle of baseball season, and that’s the only thing on his mind these days. We don’t really talk about money. We probably should.

I start again. “I mean, if we’re going to do this thing…”

Linc shoots me a stern look. He doesn’t like it when I refer to our wedding as a
thing
.

I start again. “If we’re going to do this lovely, fantastic, blissful event, then I would really like it to be in this amazing church that overlooks the Pacific and Half Moon Bay. I’m sorry; I just don’t want to get married at somebody’s restored house on a golf course. That’s not my idea of a wedding.” Now, I’m coasting on thin ice because he likes the Hollins House a lot and has told me this at least a thousand times since he booked it. The one thing Linc did for this wedding while I have handled everything else.

Word of advice don’t get engaged in the middle of summer and expect to be able to get married at an awesome venue three months later. Not going to happen. At least, not in San Francisco. Linc needs a place that will accommodate his four hundred plus guests from the must-be-invited list his father surreptitiously sent us three weeks ago. And now there are
more
names. I didn’t expect Davis Presley to have so many demands, but then again, I have been wrong about a number of things when it comes to Linc’s dad.

I sigh a little because I haven’t told the groom-to-be the other part—what I consider to be the best part—about the little church in Half Moon Bay, it can only accommodate about a hundred people. Of course, there’s the sanctuary nearby that can accommodate up to two hundred and fifty guests if you need that, but that’s not what I want, and it still won’t be enough for the four hundred plus people his dad has insisted we invite. So the guest list would have to be trimmed way down. I hesitate to tell Linc this part until after he’s seen the place.

“I mean if we’re going to do this, let’s do it right,” I say softly, feeling more anxious. “Look, we’re almost there.” I hold my breath as we get our first glimpse of Half Moon Bay.

“Right. Almost there.” Linc sighs from the driver’s seat. “Good ‘cause I’m tired. Those flights back from Detroit are killer.”

“I know you’re tired, but it’s the only time we could fit it in before you leave again. Just keep an open mind. That’s all I ask.”

“I will. I just don’t understand why we have to come all the way out here to get married, but…” He stops talking when the church comes into view and looks uneasy. “There’s no way over four hundred people are going to fit into that little church, Tally.”

“Just wait until you’ve seen the inside.
Please
?”

Yes, there’s been some of that. An unexpected and enormous guest list. Linc’s dad. Interference from all sides. Baseball. Ballet. Wedding plans that never seem to get done. A cake that still needs to be ordered along with the catered food. What about this? What about that? Try this. Eat that. Drink this. Color that. Dress in this or maybe that. His tuxedo has been ordered, but it still needs to be tailored—a fitting that the groom can never make. You’ve settled on the design of the invitations, but you can’t print them until you find the place and set the date—a date that doesn't interfere with baseball or ballet’s fall season. However, you have to find a place to get married first. That’s my to-do list. Linc’s to-do list is comprised of one thing, and one thing only,
baseball
.

Sure, the end of July and beginning of August were fun for us. We’d just gotten engaged but by the time September rolled around I’ve begun to understand more of what baseball season really means and my perspective has shifted. Linc is out of town three and four days at a time. His days off are rare and he’s at practice when he’s not playing, He’s either dropping off dirty uniforms to be laundered or packing up his suitcase for the next series of games out of town. It’s been infrequent hellos and too many rushed good-byes at the airport for us. Those two scenes seem to have become the most memorable ones for the past several weeks. Since I’m left to juggle little Cara’s schedule as well as mine and hold the fort without him, there’s been some tension between us. Yes, we’ve been engaged for a few months and that part is fun. But this part? Planning a wedding without him and trying to accommodate his dad? Not so much.

“It’s great,” he says with a notable lack of enthusiasm as he gets out and looks over the roof of the car at me. He smirks a little, then turns and looks out at the Pacific that you can just glimpse from the front of the church steps. I hear him sigh deep. “It’s just great.” I watch him breathe in the faint hint of salty air and gaze wistfully out at the ocean, but he’s no longer smiling. “Great. Just great.”

It doesn’t sound
great
the way he’s said it. And can we talk about the rhetorical use of the word
great
in describing everything in the past two minutes?

I’m cut off from saying anything more to him because Pastor Dan Reeve stands at the top of the church steps waiting to meet us.

Great. We’re fighting. That will go over big.

“Tally, you’re finally here and this must be Linc. It’s nice to meet you both.” Pastor Dan shakes hands with Linc without even mentioning he’s an avid fan of the Giants like he has to me every time we’ve talked on the phone. “Come in. Come in. I just made some lemonade because Tally called saying you’d
both
be making the trip. How wonderful to finally meet you two.” He lifts a quizzical brow at Linc. “I was beginning to wonder if you were a myth that Tally was just going on about, but here you are, Lincoln Presley, a living legend in person and everything.”

“I’m just like everybody else, sir.” Linc forces a smile and then attempts to catch my eye with some kind of subtle reprimand as if I
told
this man I was marrying a famous baseball player beforehand.

I smile sweetly at Linc and then turn to the minister. “We try to downplay the fame thing. Linc doesn’t want to make me feel bad since he makes a hundred times more money than I do, and I work twice as hard.”

I laugh and so does Pastor Dan. Linc makes an effort, but it’s forced. And I know it.
We are off today, him and me.

“Just call me Dan, everyone else does. You’ve got quite a girl here in Tally. I’ve enjoyed hearing about the two of you from her, but really want to hear from you as well. That’s why I insist on meeting couples in person before we even begin to talk about wedding dates.” Dan winks at me and I get a little red in the face thinking if he only knew what I’ve put Linc through in the past few years. Linc sighs a little, sounding tired and impatient, two things he actually never seems to be, normally. I kind of glare his way, telepathically telling him to keep an open mind about the church and this man who would be marrying us. “So, we should talk about your wedding plans and your future and the two of you.”