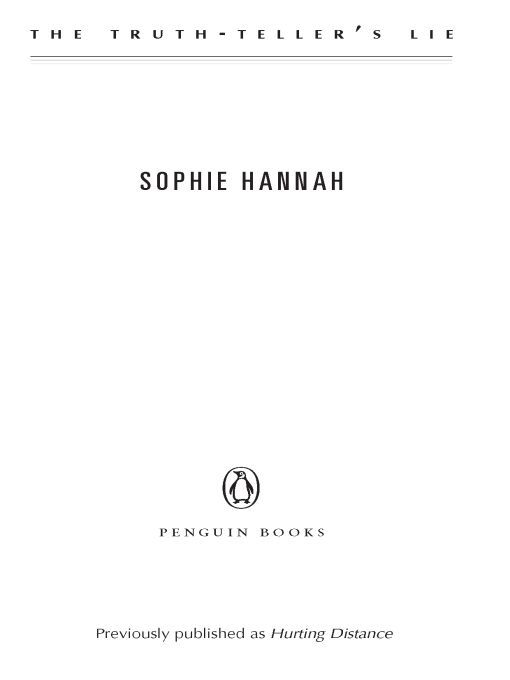 Table of Contents
Dedication
Title Page
Copyright Page
Part I - 2006
Chapter 1 - Monday, April 3
Chapter 2 - 4/3/06
Chapter 3 - Tuesday, April 4
Chapter 4 - 4/4/06
Chapter 5 - Tuesday, April 4
Chapter 6 - 4/4/06
Chapter 7 - 4/5/06
Chapter 8 - Wednesday, April 5
Chapter 9 - 4/5/06
Chapter 10 - Thursday, April 6
Chapter 11 - 4/6/06
Part II
Chapter 12 - 4/6/06
Chapter 13 - Thursday, April 6
Chapter 14 - 4/6/06
Chapter 15 - Friday, April 7
Chapter 16 - 4/7/06
Chapter 17 - Friday, April 7
Chapter 18 - 4/7/06
Chapter 19 - Friday, April 7
Chapter 20 - 4/8/06
Chapter 21 - 4/8/06
Part III
Chapter 22 - Saturday, April 8
Chapter 23 - 4/8/06
Chapter 24 - Saturday, April 8
Chapter 25 - 4/8/06
Chapter 26 - Saturday, April 8
Chapter 27 - 4/8/06
Chapter 28 - Sunday, April 9
Chapter 29 - 4/9/06
Chapter 30 - Sunday, April 9
Chapter 31 - Monday, April 10
Chapter 32 - 4/13/06
Chapter 33 - Thursday, May 4
Chapter 34 - 5/19/06
Acknowledgements
PENGUIN BOOKS
THE TRUTH-TELLER’S LIE
Sophie Hannah is the author of the international bestsellers
Little Face
,
The Wrong Mother
, and
The Dead Lie Down
. In 2004 she won the Daphne Du Maurier Prize for Suspense Fiction, and she is also an award-winning poet. She lives in Cambridge, England, with her husband and two children.
Praise for Sophie Hannah
The Dead Lie Down
“A master of intricate plotting, Hannah seamlessly melds the police procedural with a gothic-inspired whodunit.”
—
Publishers Weekly
(starred review)
“Hannah deals brilliantly with the issues of artistic accomplishment and success, unrequited emotion, revenge, and retribution. This stunning psychological thriller from the author of the equally outstanding
The Wrong Mother
has the complexities of love at its core.”
—
Booklist
(starred review)
“This utterly gripping thriller should establish Hannah as one of the great unmissables of this genre—intelligent, classy and with a wonderfully gothic imagination.”
—
The Times
(London)
“Beautifully written and precision-engineered to unsettle.”
—
The Guardian
(London)
“A master class in plotting that adds twist after twist in a hectic finale.”
—
The Sunday Times
(London)
The Wrong Mother
“Shockingly (and refreshingly) blunt riffs about the violent emotions of motherhood and the familial yearnings of men, along with chilling and darkly funny revelations about lust and loyalty, make this novel one of the season’s most absorbing reads.”
—
O, The Oprah Magazine
“Paced like a ticking time bomb with flawlessly distinct characterization, this is a fiercely fresh and un-put-downable read.”
—
Publishers Weekly
(starred review)
“Sophie Hannah just gets better and better. Her plots are brilliantly cunning and entirely unpredictable. The writing is brilliant and brings us uncomfortably close to the dark, ambivalent impulses experienced by the parents of difficult, demanding children.”
—
The Guardian
(London)
“Sophie Hannah’s ingenious, almost surreal mysteries are so intricately constructed that it’s impossible to guess how they will end.”
—
The Daily Telegraph
(London)
“
The Wrong Mother
is Hannah’s most accomplished novel yet. As the revelations tumble forth, the tension is screwed ever tighter until the final shocking outcome. Exemplary.”
—
Daily Express
(London)
Little Face
“Dark psychological suspense . . . The power this novel packs derives from narrators that play fast and loose with what they know. . . . The solution is a stunner.”
—
The Boston Globe
“Sophie Hannah . . . delves successfully into moral quandaries: What does motherhood mean? What should a mother do when she thinks her child is in danger—especially if her own family doesn’t agree? . . . It’s Alice’s choices and their consequences that make
Little Face
so compelling.”
—
The Washington Post
“Few authors play with reality and perception as skillfully as Hannah does. . . . Riveting reading.”
—
Mystery Scene
“Echoes of
Gaslight
and
Rebecca
. . . a tautly claustrophobic spiral of a story delivered with self-belief.”
—
Kirkus Reviews
“The author is a poet by trade and she brings a wealth of psychological and literary subtlety to bear in this impressive novel. Smart and disarmingly unnerving.”
—
Daily Mail
(London)
“A chilling thriller. I was left thinking about the book for days, and that’s usually a good thing.”
—
The Guardian
(London)
To access Penguin Readers Guides online, visit our Web sites at
www.penguin.com
or
www.vpbookclub.com
. 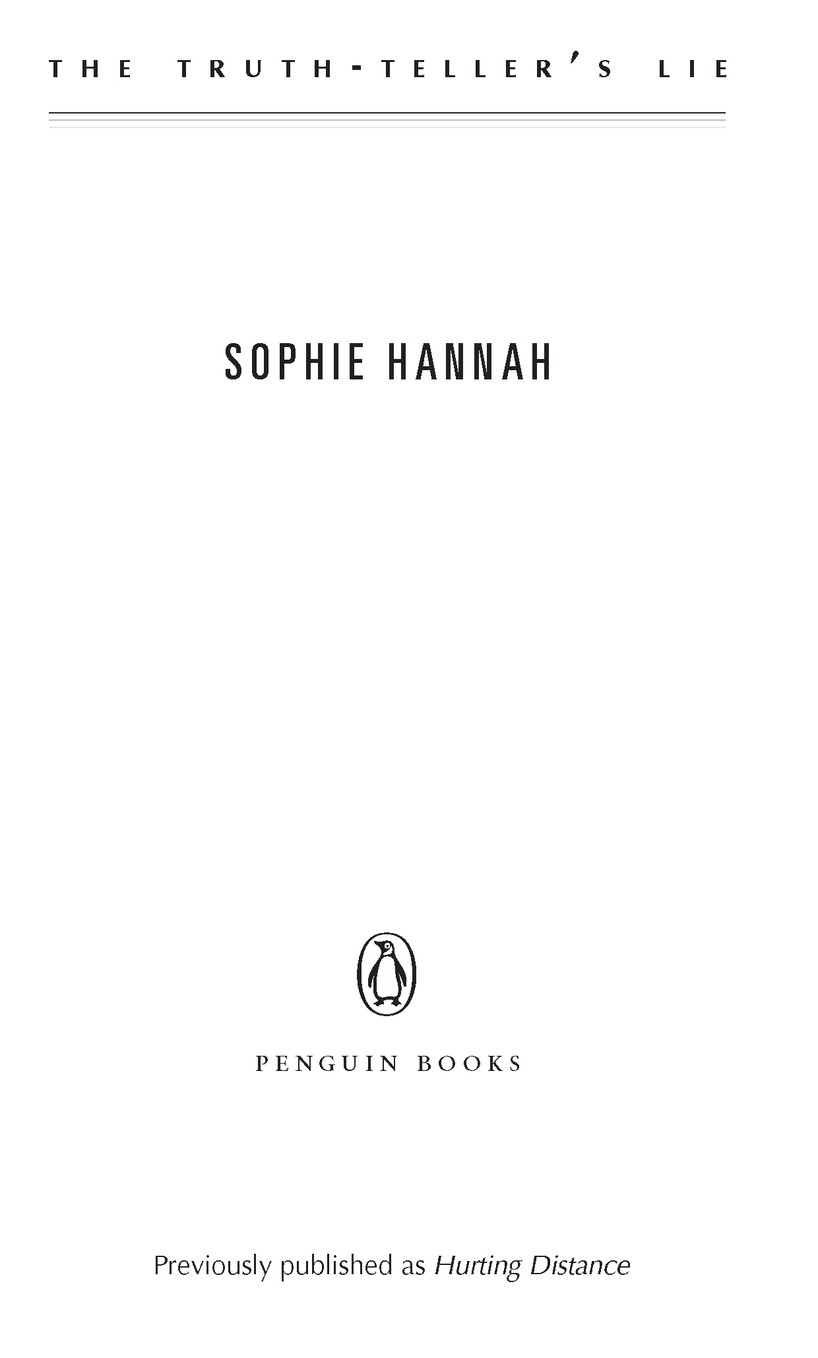 From: NJ
This is not my story. I’m not sure I want to share that, or my feelings, with strangers, on a website. It would seem phoney, somehow—phoney and attention-seeking. This is just something I want to say, and your website gives no address for submitting letters.
Did you ever stop to wonder, when you were thinking of a name for your organisation, whether speaking out is always the best thing to do? Once you tell somebody something, it makes it more real. Why take what you wish had never happened and make it happen again and again in the minds of everyone you know? I will never tell anybody my so-called story, which means there will be no justice, no punishment for those who deserve it. Sometimes that thought is pretty hard to take. Still, it’s a small price to pay for not having to spend the rest of my life being thought of as a victim.
Sorry, a survivor. Though that word makes me feel uneasy. At no point did anybody try to kill me. It makes sense to talk about survivors in the context of a plane crash or a nuclear explosion: situations in which it might be expected that everyone involved would die. But in most cases rape is not a life-threatening event, so the sense of rare achievement that the word ‘survivor’ conveys seems patronising—a sort of false consolation.
When I first logged on to your site, I hoped that something I read there would make me feel better, but the opposite has happened. Why do so many of your correspondents use the same cloying vocabulary: thriving, telling and healing, smiling through tears, rising from the ashes, etc.? It reminds me of the lyrics of a bad heavy-metal album. Nobody says that they do not ever expect to get over what happened to them.
This will sound terrible, but I am actually jealous of many of the people whose stories are posted on your site: the ones with insensitive, demanding boyfriends, the ones who drank too much on first dates. At least they can make sense of their ordeals. My attacker was someone I had never seen before and have not seen since, someone who kidnapped me in broad daylight and knew every detail about me: my name, my job, where I lived. I don’t know how he knew. I don’t know why he chose me, where he took me or who all the other people were. I will not go into any more detail than that. Perhaps if I did, you’d understand why I feel so strongly about what I’m going to say next.
On the ‘What Is Rape?’ page of your site, you list a number of definitions, the last of which is ‘any sexually intimidating behaviour’. You go on to say, ‘No physical contact needs to have taken place—sometimes an inappropriate look or comment is enough to make a woman feel violated. ’ When I read that, I wanted to hit whoever wrote it.
I know you’ll disapprove of this letter and me and everything I’ve said, but I’m sending it anyway. I think it’s important to point out that not all rape victims have the same mindset, vocabulary and attitudes.
Part I
2006
1
Monday, April 3
I COULD EXPLAIN, if you were here to listen. I am breaking my promise to you, the only one you ever asked me to make. I’m sure you remember. There was nothing casual about your voice when you said, ‘I want you to promise me something.’
‘What?’ I asked, propping myself up on one elbow, burning my skin on the yellow nylon sheet in my eagerness to be upright, attentive. I was desperate to please you. You ask for so little, and I’m always looking for small, subtle ways to give you more. ‘Anything!’ I said, laughing, deliberately extravagant. A promise is the same as a vow, and I wanted there to be vows between us, binding us.
My exuberance made you smile, but not for long. You’re so grave when we’re in bed together. You think it’s a tragedy that you’ll soon have to leave, and that is how you always look: like a man preparing for calamity. I usually cry after you’ve gone (no, I’ve never told you, because I’m damned if I’m going to encourage your mournful streak), but while we’re together in our room I’m as high as if I were on strong, mind-altering drugs. It seems impossible that we will ever be apart, that the moment will end. And in some ways it doesn’t. When I go home, when I’m making pasta in my kitchen or chiselling Roman numerals in my workshop, I’m not there really. I’m still in room eleven at the Traveltel, with its hard, synthetic, rust-coloured carpet that feels like the bristles of a toothbrush under your feet and its pushed-together twin beds with mattresses that aren’t mattresses at all but thick, orange foam mats, the sort that used to cover the floor of the gymnasium at my secondary school.

Fangirl by Rainbow Rowell
Virile by Virile (Evernight)
The Summer of Me by Angela Benson
The Mirror of Fate by T. A. Barron
On the Fly by Catherine Gayle
Mercy for the Fallen by Lisa Olsen
Vampire Mine by Kerrelyn Sparks
A Headstrong Woman by Maness, Michelle
Fan the Flames by Katie Ruggle
Dune Time by Jack Nicholls