Read The Truth Will Out Online

The Truth Will Out 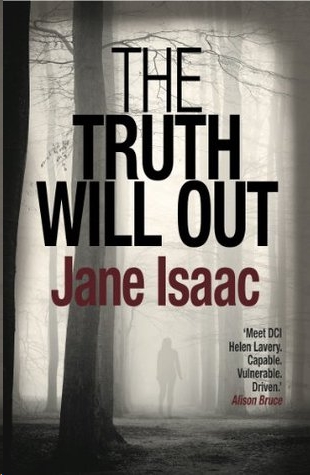 The
Truth
Will Out

The right of the above author to be identified as the author of this work has been asserted in accordance with the Copyright, Designs and Patent Act 1988. British Library Cataloguing in Publication Data available.

Printed in the United Kingdom by TJ International

All rights reserved. No part of this publication may be reproduced, stored in or introduced into a retrieval system, or transmitted, in any form, or by any means electronic, mechanical, photocopying, recording or otherwise, without the prior permission of the publisher. Any person who commits any unauthorised act in relation to this publication may be liable to criminal prosecution and civil claims for damages.

Jane’s debut novel
An Unfamiliar Murder
was nominated as best mystery in the ‘eFestival of Words Best of the Independent eBook awards’.

There are many people who helped nurture this novel to fruition. Firstly, I must thank David at Rutland Minis for listening with good humour when you received that Wednesday morning phone call early last year, asking about storage space in the door panel of a Mini. Your knowledge and advice was much appreciated and any deviation or errors in the book are purely my own.

Thanks also to my good friend and retired Detective Superintendent, Glyn Timmins, who gave me so much time and insight into senior policing. The next lunch is definitely on me.

I was very fortunate to have the ear of Dr Jenny McGillion who gave valuable advice and insight on the psychological background of one of the characters. Thank you for your time and frankness.

To my four beta readers: Susan Harris Dorsey, Rebecca Bradley, Kev Wooldridge and Kate Anderson. Your feedback was very valuable, certainly improved the story and helped to make it what it is today.

Gratitude goes to Lauren Parsons, Tom Chalmers, Lucy Chamberlain and all the lovely team at Legend Press for believing in the novel, taking it off their slush pile and being so supportive throughout the publication process.

I am blessed with wonderful friends and family whose input and support has helped tremendously along the way: Dionne Lister, Bernadette Davies, Emma Thompson, Peter Arnold, Stephanie Daniels, Jean Bouch and Derek Archer.

Most of all, I wish to thank David and Ella - for absolutely everything.

To Derek and Penny, two of life’s special people.

Eva Carradine’s foot tapped a staccato rhythm as she sat back in her chair and waited for her computer to connect. Green velvet curtains shrouded the window beside her. An umbrella lamp and gas fire combined with the light of her laptop to produce a soft hue in the room, just enough for her to view the buttons on her keyboard.

Naomi’s face appeared on the screen in front of her. No pleasantries were exchanged. No gestures made. “I can’t do this anymore.”

Eva’s stomach fisted. She stared at her friend’s crumpled face. “Naomi, don’t… We said we wouldn’t talk about this. We promised.” The image on her laptop flickered as Naomi reached across and took a glug from a glass of red. Crisp classical notes rose and fell in the background. “How was work?”

Naomi shook her head. “Hopeless. I can’t concentrate.” Her glass clattered as it hit the hard surface.

Eva flinched. “You need to get a grip.” She took a deep breath, “Everything’s going to be okay.”

Suddenly Naomi turned. For a split second she halted, her head inclined.

She whisked back to face Eva. “There’s somebody in the house… ”

The gloved hand appeared from nowhere. It stretched across Naomi’s mouth gripping her head back tightly, pulling her skin taut across her cheekbones.

Eva stared at the computer screen in horror. “Naomi?”

Naomi was pulled away, out of view. Eva heard crashing noises as blurred movements flashed across the screen. Urgent voices were muffled by the tranquil sound of Beethoven’s 6th, still playing distantly in the background. It was surreal, almost in slow motion, as if it were taking place underwater.

A flash in the distance. Somebody approached the screen. The hand. It loomed towards her…

As it drew nearer, Eva felt the paralysis of fear take over. Just as the hand reached her, she scooted back, adrenalin igniting every muscle in her body with a sudden kick of energy. She fell over her chair, sending a coffee mug and a pile of magazines crashing to the floor in her scramble to get as far away as possible. A movement flashed over the Skype box on the screen before it went blank.

Naomi! A sharp pain spiked Eva’s lower back. She pressed her hand to it.

What should she do? Call an ambulance? The police? No! Not the police. Definitely, not the police…

Ten minutes later, Eva opened her front door and glanced nervously up and down the street. A light carpet of snow covered everything in sight; an icy draft pinched at every bare patch of skin. She rushed past the maple out front, whipping its branches angrily against the relentless wind. By the time she had secured her case, locked her front door and reached the comfort of the driver’s seat, her teeth were chattering incessantly.

Eva wiped a palm across her forehead, pushing strands of hair out of her face. In desperation, she pulled her mobile phone out of her pocket and dialled Naomi’s number for the umpteenth time. The phone rang out – one, two, three – when it reached six and the answer phone kicked in, the muscles in Eva’s hands were trembling violently.

She glanced at the clock. The ambulance would be there by now. Eva yearned to see Naomi, make sure she was okay. But going over there could mean… A shiver skittered down her spine. She dialled another number, cursing as it switched to voicemail, leaving a desperate message. Come on, Jules. He had to be there. He promised.

Eva drew a shaky breath and ignited the engine. It was going to be a very long night.

Detective Chief Inspector Helen Lavery rubbed her forehead and forced herself to take another look at the photograph of sixteen-year-old Kieran Harvey that filled her computer screen. His buckled frame was closed into a foetal position, a hand stretched towards the curb, beautiful blond hair soaked in blood.

She clicked a button and brought up another image next to it. Leon Stratton looked younger than his seventeen years, his lithe body contorted on the tarmac, arm wedged unnaturally under his body, a gaping hole in the centre of his chest.

Helen’s stomach knotted every time she looked at them. Kieran reminded her of Matthew whilst Leon’s dark hair and skinny body looked just like Robert. Her own boys - just a few years younger than these dead shells.

She turned the photos around on the screen, as if looking at them from another angle would offer up some new clue they hadn’t already discovered. Their backgrounds suggested a link, but no murder weapon had been discovered. Both shootings occurred within a month of each other, a year ago in Roxten. Yet, despite huge police efforts, they still hadn’t been able to produce a credible suspect for either crime.

Helen massaged the back of her neck. She hated homicide cold case review; the burning sense of injustice got underneath her skin and slunk about like a worm trying to find its way out.

The press had cranked up the pressure. They pounced on the shooting of fifteen-year-old Germaine Long in nearby London two weeks earlier, claiming that the UK was developing an escalating culture of gang related gun crime.

In an effort to placate, the Home Secretary had declared that incidents involving firearms in the UK were at their lowest for twenty years. But, like a cornered wasp, the press fought hard, whipping the public into a frenzy and forcing the newly elected Police Commissioners to focus on every unsolved firearms incident. They wanted results and fast.

She looked back at the photos and considered the linking factors. Both boys shared previous records for assault and possession of cannabis. Intelligence indicated that both were linked to a group who called themselves the ‘East Side Boys’, which, it was suspected, were responsible for a significant amount of acquisitive crime in Roxten. She switched to the map on her laptop.

Once a quaint village on Hampton’s periphery, Roxten was swallowed into the midland’s city during the 1970s when migrants flooded into the town as it expanded to accommodate London overspill. A contemporary architect was commissioned to design several new cutting edge estates to make maximum use of the space available. Housing estates grandly named ‘The Royal Albert’ and ‘The Queen Victoria’, which later became known generically as ‘the rabbit warren’, were comprised of numerous alleys and back entrances making them particularly difficult to police.

When austerity tightened the screws during the depression of the 1980s, a cloud of darkness descended on Roxten and the rabbit warren, now the less salubrious area, was dragged into a pit of gloom.

Helen yawned. The rabbit warren was where both boys had lived, where both murders had been committed. And, after working Roxten for a year as an immediate response sergeant during her ten-year career, she knew more than anybody that getting evidence out of residents of the rabbit warren was near on impossible.

She stretched out her arms, glanced at the clock. Twenty past eight. Her eyes brushed a photo in a rustic frame on the corner of the desk. As she picked it up and fingered the outline of her late husband, a familiar longing flooded her chest. Briefly, she allowed herself to wonder how different her life would have been if he hadn’t died so suddenly ten years ago. She wouldn’t be squirreled in her study, working her evenings away before curling up to watch the late news and venturing off to bed, alone.

The buzz of her mobile interrupted her thoughts.

“Ma’am, this is Inspector Staples in the control room. We have the body of a young woman at eight Brooke Street, Hampton. Cause of death is gunshot wounds to the chest.”

Brooke Street was located off Hampton High Street in the centre of the city. Red-bricked terraces lined the curbside with front doors that opened directly onto narrow strips of pavement. By the time Helen arrived it was a hive of activity. Police cars parked at angles blocked off either end, an ambulance sat in situ, filling the middle of the road. Uniformed officers swarmed around neighbouring terraces, assiduously searching out witnesses and taking statements. In spite of the inclement weather, the pavement was littered with nosey residents desperately trying to get a handle on what was happening. Helen even recognised a few members of the local press and raised her eyes to the heavens. It didn’t take long for the vultures to descend.