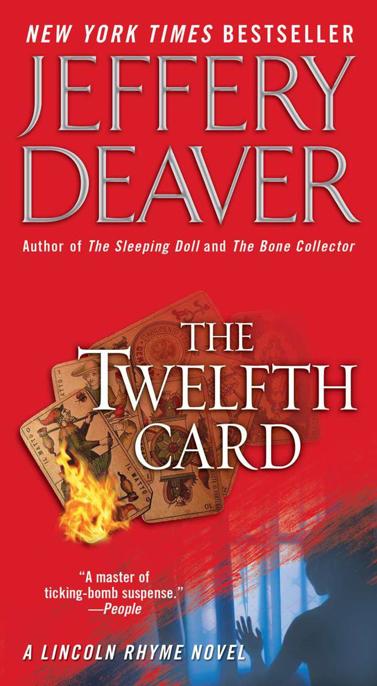 “[He] is among the most brilliant and most vulnerable of crime fiction’s heroes.”

“Well-written, suspenseful . . . . The Rhyme novels are among the cleverest of contemporary detective fiction . . . . Deaver must have been born with a special plot-twist gene.”

“Like the CBS hit
CSI
, Deaver’s Lincoln Rhyme books have nearly fetishized crime-scene procedures and technology . . . . These details form the absorbing core of
The Twelfth Card
.”

“Deaver has no trouble getting inside the tormented mind of a killer.”

This title is also available from Simon & Schuster Audio

“Deaver’s labyrinthine plots are astonishing . . . . [He] knows how to play this game for all it’s worth.”

“Wake up, Scarpetta fans—Lincoln Rhyme is here to blast you out of your stupor.”

“This is prime Deaver, which means prime entertainment.”

“Keeps the pulse racing while challenging the emotions . . . . Deaver does a masterful job of conveying incipient evil.”

Thank you for purchasing this Simon & Schuster eBook.

Part I: The Three-Fifths Man

To the memory of Christopher Reeve,
a lesson in courage, a symbol of hope

“Some people are your relatives but others are your ancestors, and you choose the ones you want to have as ancestors. You create yourself out of those values.”

His face wet with sweat and with tears, the man runs for freedom, he runs for his life.

The former slave does not know exactly where the voice comes from. Behind him? To the right or left? From atop one of the decrepit tenements lining the filthy cobblestoned streets here?

Amid July air hot and thick as liquid paraffin, the lean man leaps over a pile of horse dung. The street sweepers don’t come here, to this part of the city. Charles Singleton pauses beside a pallet stacked high with barrels, trying to catch his breath.

A crack of a pistol. The bullet goes wide. The sharp report of the gun takes him back instantly to the war: the impossible, mad hours as he stood his ground in a dusty blue uniform, steadying a heavy musket, facing men wearing dusty gray, aiming their own weapons his way.

“Somebody stop him! Five dollars’ gold if you catch him.”

But the few people out on the streets this early—mostly Irish ragpickers and laborers trooping to work with hods or picks on their shoulders—have no inclination to stop the Negro, who has fierce eyes and large muscles and such frightening determination. As for the reward, the shouted offer came from
a city constable, which means there’s no coin behind the promise.

At the Twenty-third Street paintworks, Charles veers west. He slips on the slick cobblestones and falls hard. A mounted policeman rounds the corner and, raising his nightstick, bears down on the fallen man. And then—

And? the girl thought.

What happened to him?

Sixteen-year-old Geneva Settle twisted the knob on the microfiche reader again but it would move no farther; she’d come to the last page on this carriage. She lifted out the metal rectangle containing the lead article in the July 23, 1868, edition of
Coloreds’ Weekly Illustrated.
Riffling through the other frames in the dusty box, she worried that the remaining pages of the article were missing and she’d never find out what happened to her ancestor Charles Singleton. She’d learned that historical archives regarding black history were often incomplete, if not forever misplaced.

Where was the rest of the story?

Ah . . . Finally she found it and mounted the carriage carefully into the battered gray reader, moving the knob impatiently to locate the continuation of the story of Charles’s flight.

Geneva’s lush imagination—and years of immersing herself in books—had given her the wherewithal to embellish the bare-bones magazine account of the former slave’s pursuit through the hot, foul streets of nineteenth-century New York. She almost felt she was back there, rather than where she really was at the moment: nearly 140 years later in the deserted fifth-floor library of the Museum of African-American Culture and History on Fifty-fifth Street in Midtown Manhattan.

As she twisted the dial, the pages streamed past on the grainy screen. Geneva found the rest of the article, which was headlined:

CHARLES SINGLETON, A VETERAN OF THE WAR BETWEEN THE STATES, BETRAYS THE CAUSE OF OUR PEOPLE IN A NOTORIOUS INCIDENT

A picture accompanying the article showed twenty-eight-year-old Charles Singleton in his Civil War uniform. He was tall, his hands were large and the tight fit of the uniform on his chest and arms suggested powerful muscles. Lips broad, cheekbones high, head round, skin quite dark.

Staring at the unsmiling face, the calm, piercing eyes, the girl believed there was a resemblance between them—she had the head and face of her ancestor, the roundness of his features, the rich shade of his skin. Not a bit of the Singleton physique, though. Geneva Settle was skinny as a grade-school boy, as the Delano Project girls loved to point out.

She began to read once more, but a noise intruded.

A click in the room. A door latch? Then she heard footsteps. They paused. Another step. Finally silence. She glanced behind her, saw nobody.

She felt a chill, but told herself not to be freaked. It was just bad memories that put her on edge: the Delano girls whaling on her in the school yard behind Langston Hughes High, and that time Tonya Brown and her crew from the St. Nicholas Houses dragged her into an alley then pounded her so bad that she
lost a back tooth. Boys groped, boys dissed, boys put you down. But it was the girls who made you bleed.

The nature of this place didn’t help. Dim, musty, quiet. And there was no one else here, not at eight-fifteen on a Tuesday morning. The museum wasn’t open yet—tourists were still asleep or having their breakfasts—but the library opened at eight. Geneva had been waiting here when they unlocked the doors, she’d been so eager to read the article. She now sat in a cubicle at the end of a large exhibit hall, where faceless mannequins wore nineteenth-century costumes and the walls were filled with paintings of men in bizarre hats, women in bonnets and horses with wack, skinny legs.

Legalizing Prostitution: From Illicit Vice to Lawful Business by Ronald Weitzer
The Collected Stories of Lorrie Moore by Lorrie Moore
Murder at Merisham Lodge: Miss Hart and Miss Hunter Investigate: Book 1 by Celina Grace
Going Under by Georgia Cates
The Beauty of Surrender by Eden Bradley
Welcome to Harmony by Jodi Thomas
The Boyfriend League by Rachel Hawthorne
The Edge on the Sword by Rebecca Tingle
Chasing I Do (The Eastons #1) by Marina Adair
It Never Rhines but It Pours by Erin Evans