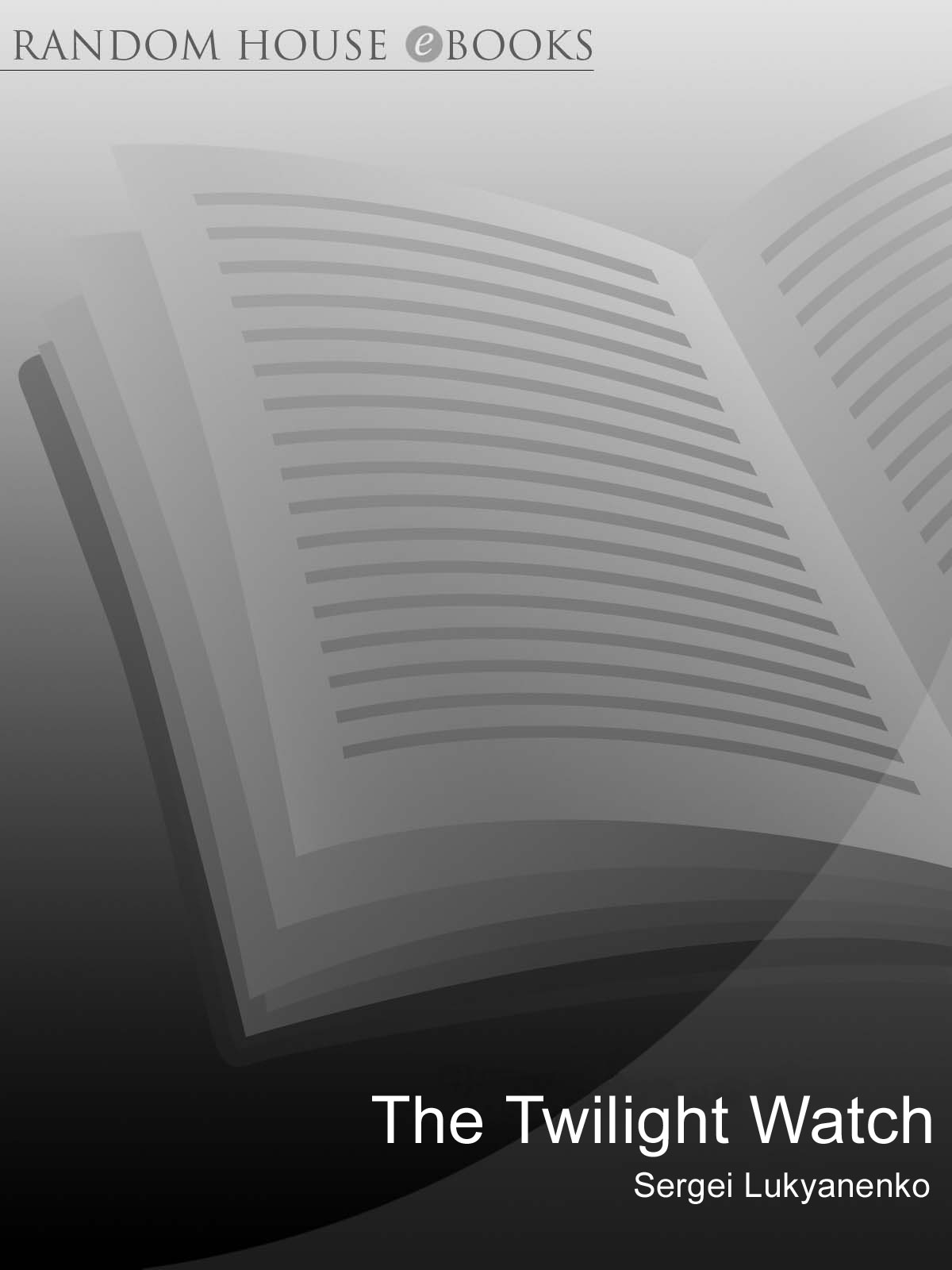 In Russia, the three volumes of the
Night Watch
trilogy have sold
over two million hardcovers between them.
The Night Watch
and
The Day Watch
have been adapted into internationally successful
films, which have been distributed round the world. The film
version of
The Twilight Watch
is currently in production. Sergei
Lukyanenko lives in Moscow.

The Night Watch
The Day Watch

Translated from the Russian by Andrew Bromfield

Sergei Lukyanenko has asserted his right under the Copyright, Designs
and Patents Act, 1988 to be identified as the author of this work.

This book is a work of fiction. Names and characters are the product
of the author's imagination and any resemblance to actual persons, living
or dead, is entirely coincidental.

First published in Russian under the title

Addresses for companies within The Random House Group Limited can be
found at:
www.randomhouse.co.uk/offices.htm

This text is of no relevance to the cause of the Light.

This text is of no relevance to the cause of the Dark.

T
HE GENUINE OLD
communal courtyards in Moscow's apartment
blocks disappeared sometime between the eras of the two popular
bards Vysotsky and Okudzhava.

It's a strange business. Even after the revolution, when for
purposes of the struggle against 'the slavery of the kitchen', they
actually did away with kitchens in housing blocks, nobody tried
to get rid of the courtyards. Every proud Stalinist block that
displayed its Potemkin façade to the broad avenue beside it had
to have a courtyard – large and green, with tables and benches,
with a yard-keeper scraping the asphalt clean every morning. Then
the age of five-storey sectional housing arrived – and the courtyards
shrivelled and became bare, the yard-keepers who had been
so grave and staid were replaced by yard women, who regarded
it as their duty to give little boys who got up to mischief a clip
round the ear and upbraid residents who came home drunk. But
even so, the courtyards still hung on.

And then, as if in response to the increased tempo of life, the
houses stretched upwards. From nine storeys to sixteen, or even
twenty-four. And as if each building was allocated the right only
to a certain volume of space, rather than an area of ground, the
courtyards withered right back to the entrances and the entrances
opened their doors straight onto the public streets, while the male
and female yard-keepers disappeared and were replaced by
communal services functionaries.

Okay, so the courtyards came back later, but by no means to
all the buildings, as if they'd taken offence at being treated so
scornfully before. The new courtyards were bounded by high walls,
with fit, well-groomed young men sitting in the gate lodges, and
car parks concealed under the English lawns. The children in these
courtyards played under the supervision of nannies, the drunken
residents were helped from their Mercedes and BMWs by bodyguards
accustomed to dealing with anything, and the new yard-keepers
tidied up the English lawns with German mowers.

This courtyard was one of the new ones.

The multistorey towers on the bank of the River Moscow were
known throughout Russia. They were the capital's new symbol –
replacing the faded Kremlin and the TsUM department store,
which had become just an ordinary shop. The granite embankment
with its own quayside, the entrances finished with Venetian
plasterwork, the cafés and restaurants, the beauty salons and supermarkets
and also, of course, the apartments with two or three
hundred square metres of floor space. The new Russia probably
needed a symbol like this – pompous and kitschy, like the thick
gold chains that men wore round their necks during the period
of initial accumulation of capital. And it didn't matter that most
of the apartments that had been bought long ago were still standing
empty, the cafés and restaurants were closed, waiting for better
times to come, and the waves lapping against the concrete quayside
were dirty.

The man strolling along the embankment on this warm summer
evening had never worn a gold chain. He possessed a keen intuition
that was more than adequate as a substitute for good taste.
He had switched his Chinese-made Adidas tracksuit in good time
for a crimson club jacket and then been the first to ditch the
crimson jacket in favour of a Versace suit. He was ahead of the
game even in the sports that he played, having abandoned his
tennis racket for mountain skis a whole month before all the
Kremlin officials . . . even though at his age the pleasure he could
get from skis was limited to standing on them.

He preferred to live in his mansion house in the Gorki-9
district, only visiting the apartment with the windows overlooking
the river when he was with his lover.

But then, he was planning to get rid of his full-time lover –
after all, no Viagra can conquer age, and conjugal fidelity was
coming back into fashion.

His driver and bodyguards weren't standing near enough to hear
what their employer was saying. But even if the wind did carry
snatches of his words to their ears, what was so strange? Why
shouldn't a man make conversation with himself as the working
day was drawing to a close, standing all alone above the dancing
waves? Where could you ever find a more sympathetic listener
than your own self?

The stars were shining dimly through the city smog. On the
far bank of the river, tiny lights were coming on in the tower
blocks that had no courtyards. Only one in five of the beautiful
lamps stretching along the quayside was lit – and that was only
to humour the whim of the important man who had decided to
take a stroll by the river.

'I repeat it yet again,' the man said in a quiet voice.

The water splashed against the embankment – and with it came
the answer.

The man on the quayside was not surprised by the voice that
came out of empty space. He nodded and asked:

'But what about vampires?'

'Yes, that's one possibility,' his invisible companion agreed.
'Vampires could initiate you. If you would be happy to exist as
non-life . . . I won't lie, they don't like sunlight, but it's not fatal
to them, and you wouldn't have to give up risotto with garlic . . .'

'Then what's the problem?' the man asked, involuntarily raising
his hands to his chest. 'The soul? The need to drink blood?'

'Just the hunger. Eternal hunger. And the emptiness inside. You
wouldn't like it, I'm sure.'

'What else is there?' asked the man.

'Werewolves,' the voice replied almost jocularly. 'They can initiate
a man too. But werewolves are also one of the lower forms of
Dark Others. Most of the time everything's fine . . . but when the
frenzy comes over you, you won't be able to control yourself.
Three or four nights each month. Sometimes more, sometimes
less.'

'The new moon,' the man said with an understanding nod.

'No. Werewolves' frenzies aren't linked to the lunar cycle. You'd
be able to sense the onset of the madness ten or twelve hours
before the moment of transformation. But no one can draw up
a precise timetable for you.'

'That won't do,' the man said frostily. 'I repeat my . . . request.
I wish to become an Other. Not one of the lower Others who
are overwhelmed by fits of bestial insanity. Not a Great Magician,
involved in great affairs. A perfectly ordinary, rank-and-file Other
. . . how does that classification of yours go? Seventh-grade?'

'It's impossible,' the night replied. 'You don't have the abilities
of an Other. Not even the slightest trace. If you have no musical
talent, you can be taught to play the violin. You can become a
sportsman, even if you don't have any natural aptitude for it. But
you can't become an Other. You're simply a different species. I'm
very sorry.'

The man on the embankment laughed:

'Nothing is ever impossible. If the lowest form of Other is able
to initiate human beings, then there must be some way a man can
be turned into a magician.'

The dark night said nothing.

'In any case, I didn't say I wanted to be a Dark Other. I don't
have the slightest desire to drink innocent people's blood and go
chasing virgins through the fields, or laugh ghoulishly as I lay a
curse on someone,' the man said testily. 'I would much rather do
good deeds . . . and in general, your internal squabbles mean
absolutely nothing to me.'

'It's your problem,' the man replied. 'I'm giving you one week.
And then I want an answer to my request.'

The man on the embankment smiled:

He turned and walked towards his car – a Russian Volga, the
model that would be back in fashion again in about six months.