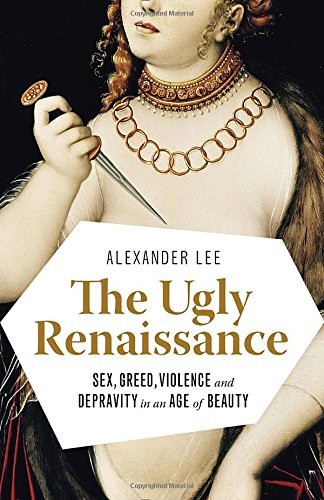 DOUBLEDAY and the portrayal of an anchor with a dolphin are registered trademarks of Random House LLC.

Introduction: Between Heaven and Earth

I THE WORLD OF THE RENAISSANCE ARTIST

4.
The Workshop of the World

II THE WORLD OF THE RENAISSANCE PATRON

7.
The Men with the Midas Touch

III THE RENAISSANCE AND THE WORLD

10.
Filippo and the Pirates

Epilogue: The Window and the Mirror 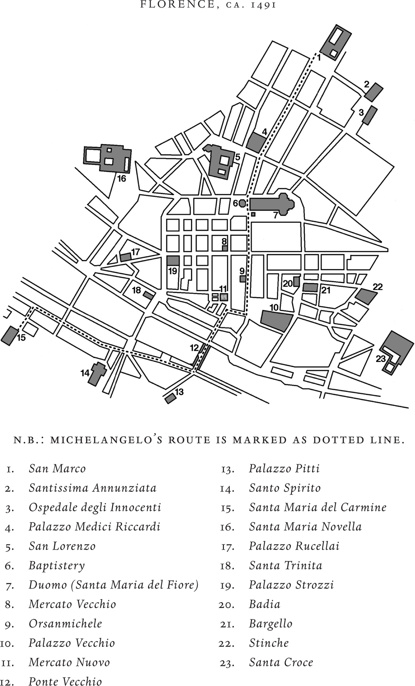 It is necessary to address a few questions of method.

First, a note on geography. This book concentrates exclusively and unashamedly on the Renaissance in “Italy,” and I am conscious that this geographical focus may be subject to some reasonable question. There was, after all, no Italy before 1871, and though humanists such as Petrarch did have a certain concept of what “Italy” meant, the notion was fairly amorphous. On the one hand, boundaries of any kind—least of all the hard-and-fast borders beloved of modern political debate—simply did not exist, and that which contemporaries might have thought Italian in some vague way quickly shaded off into other species of identity, particularly in places like Naples, Trent, and Genoa. On the other hand, even within those territories that might be defined as certainly “Italian,” the existence of dialects (there was, after all, no such thing as the Italian language yet), independent statelets, and strong local loyalties makes any geographical generalizations somewhat dangerous. This is particularly true when it comes to the great North/South divide, a division that is so intense it continues to dominate Italian political debate today but is no less troublesome when applied even to the states of early Renaissance Tuscany, for example. Yet despite these reservations, it is possible to talk of “Italy” in relation to the Renaissance with some degree of useful meaning. As scholars have readily acknowledged, the cultural developments that occurred in the Italian peninsula (broadly conceived) between ca. 1300 and ca. 1550 do indeed seem to have certain common features that stand apart from the culture of the rest of Europe and that justify talk of “Italy” in this context. I cannot help but suspect that Renaissance humanists of Petrarch’s stripe might have approved, if not on scholarly grounds, then at least for emotive reasons.

Having set out my “Italian” stall, I must point out that this book focuses most heavily on two or three major cities—that is, Florence, Rome, and (to a lesser extent) Urbino. This is not to say that other centers do not get a look in. Venice, Milan, Bergamo, Genoa, Naples, Ferrara, Mantua, and a whole host of other cities all appear in the narrative where appropriate, and it would certainly not be accurate to pretend that the Renaissance did not touch every single town and city in Italy to one extent or another. But the focus on Florence, Rome, and Urbino—with a particular accent on Florence—is, I think, justified on two main grounds. First, Florence constitutes the historical and spiritual “home” of the Renaissance as a whole. Both contemporaries and modern historians have generally agreed that it was in Florence that the “Renaissance”—however we might wish to define it—began and grew to maturity. In their different ways, and to very different degrees, Rome and Urbino constituted major focal points for artistic and literary endeavor, albeit at a later stage. Second, any narrative has to have some measure of order, and a completely comprehensive study that showed no more favor to one city than another would be both inaccurate and unwieldy.

Second, a note on chronology. Anyone with even a passing knowledge of the subject of this book will be aware of how enormously difficult it is to put dates on the Renaissance. Given how very troublesome it has proved to define what the Renaissance actually
was
, it is perhaps unsurprising that historians have agonized not only over where the termini of the period lie but also over whether it is useful to think of it in terms of a “period” (in the true sense) at all. The chronological bounds I have chosen to use for this book—that is, the years between ca. 1300 and ca. 1550—are not intended to be either authoritative or definitive, but instead reflect the general sense of scholarly consensus and are meant simply to give a measure of structure to what is already a complex enough series of phenomena. I will not deny that such vagueness is rather ugly, but since it is something that all Renaissance historians have to deal with at some stage, I can’t help but feel it is just one more example of why the “ugly” Renaissance is with us all in one way or another.

G
IOVANNI
P
ICO DELLA
Mirandola (1463–94) lived deep and sucked all the marrow out of life. There was nothing that did not interest and excite him. Having mastered Latin and Greek at an unfeasibly young age, he went on to study Hebrew and Arabic in Padua while still in the first flower of youth and became an expert on Aristotelian philosophy, canon law, and the mysteries of the Kabbalah before he was out of his twenties. Surrounded by the art of Brunelleschi,
Donatello, and
Piero della Francesca in Florence and Ferrara, he became a close friend of many of the most glittering stars of his day. A cousin of the poet
Matteo Maria Boiardo, he was an intimate acquaintance of the enormously wealthy litterateur Lorenzo de’ Medici, the classical scholar
Angelo Poliziano, the Neoplatonic trailblazer
Marsilio Ficino, and the firebrand preacher
Girolamo Savonarola. He was, moreover, a writer and a thinker of breathtaking originality. Quite apart from penning a multitude of charming verses, he dreamed of uniting all the various branches of philosophy into a single, inspiring whole and longed to bring the religions of the world together.

In many senses, Pico is the paradigmatic example of the
Renaissance man. In the course of his brief life, he captured the essence of a period in Italian history—covering the years ca. 1300–ca. 1550—that is commonly perceived as having been defined by an unparalleled explosion of cultural inventiveness and dominated by artistic and intellectual brilliance. A true
uomo universale
(universal man), he seems to have looked on the world with an unbounded sense of curiosity and excitement, and appears to have drawn on the art and literature of classical antiquity with every bit as much enthusiasm as he sought to craft a new and more glittering future for mankind that was filled with boundless hope and possibility. He conversed with artists who seemed to be reaching for
the stars, he mingled with rich and powerful patrons who seemed to live for art and culture, and he hungrily sought out new knowledge from different cultures and peoples.

It is perhaps no surprise that Pico’s greatest work—the
Oration on the Dignity of Man
(1486)—has come to be seen as the unofficial manifesto of the Renaissance as a whole. A succinct summary of Pico’s entire philosophical project, it had at its heart an unquenchable belief in man’s potential. “
I have read in the records of the Arabians,” he began,

that Abdala the Saracen, when questioned as to what on this stage of the world, as it were, could be seen most worthy of wonder, replied: “There is nothing to be seen more wonderful than man.” In agreement with this opinion is the saying of Hermes Trismegistus: “A great miracle, Asclepius, is man.”

Man, Pico believed, was indeed a miracle. In his eyes, mankind possessed a unique capacity for reaching beyond the bounds of this earth and ascending to something altogether higher, better, and more extraordinary, through poetry, literature, philosophy, and art.

When one stands in any of the great centers of the Renaissance, it is hard not to be seduced by the feeling that Pico captured the spirit of the age with unusual precision. In Florence alone, the artworks that have come to be so indelibly associated with the period seem to testify to a truly miraculous flowering of the human soul. Michelangelo’s
David
, Brunelleschi’s dome, Botticelli’s
Birth of Venus
, and
Masaccio’s
Trinity
all appear to suggest that life was touched with beauty, that patrons and artists aspired to something more than the petty concerns of everyday existence, and that the horizons of the imagination were becoming broader and more exciting with every passing day. Indeed, so intense is the sense of wonder that such works are inclined to inspire that it is sometimes difficult not to believe that their creators were not somehow
more
than merely human. So removed do they seem from worldly trivialities that they are apt to appear rather forbidding, almost godlike. “Miraculous” is certainly the word that often springs to mind.