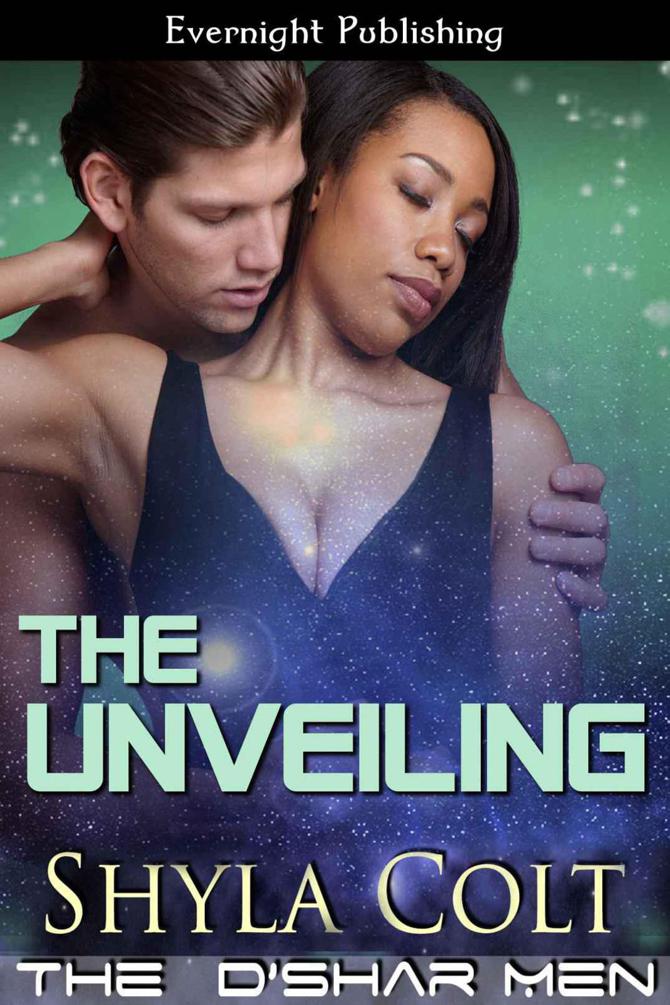 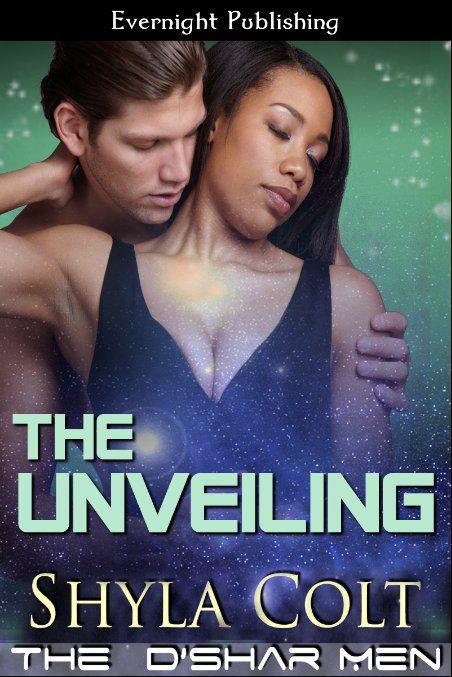 Thank you to M for the late nights, encouragement, and friendship. Teflon babe and Petunia forever.

Gold bracelets clinked together on a slender wrist.  Rivka T’Shar’s flowing black gown flared out around her with every step. A flash of metallic sandals played peek-a-boo from beneath her hem as she glanced down to study the designs etched into the concrete driveway. The amethyst-colored crescent moon that dangled above her cleavage caught the light. The familiar jewelry provided comfort. She had a funny feeling about this summons. Cool air caressed her bare arms like a lover. Despite the cold weather she preferred to wear the traditional garb of the Star Priestess for her royal visitation. Since they’d arrived on Earth she’d striven to continue her people’s practices as much as possible. They could adapt without abandoning the traditions that made their culture so beautiful and unique.
Maybe I'm just sentimental after all this time
. At thirty-five she'd had the longest reign of any Star Priestess.
In a minute they'll have to change the title to Star Matron.

A smile tugged at her lips. Self-deprecating humor had helped her keep her sanity as all of her fellow Priestesses of the Stars continued to leave the order when they discovered their mates and went through The Wanting. She'd come to the conclusion long ago that her mate had chosen to go through The Purge, a process that blocked the mating hormones, successfully stopping The Wanting for an undetermined amount of time. Why anyone would offer up a giant portion of their capacity for emotions to prevent themselves from falling in love, she could never figure out.
We’ve been over this before. I’m better off
not having to deal with such a cold-hearted, selfish mate
. The words sounded good, but too many years alone made them hard to believe.   He’d placed
her
feelings in that same vice when he chose to undergo The Purge.  It was the fact she resented almost as much as she did him.

Her core temperature spiked, and she quickly tamped down the irritation.
Last thing I need is to attend to the meeting with my King and the future Queen with hair the color of an Earth ruby or glowing purple eyes.
It might be the norm for Shar folks, but it's eerie to humans.
Hair that changed color with her moods and glowing eyes was a trait unique to those women chosen for the role of Star Priestess, the leader of the healing soothsayers who counseled royalty and held important ceremonies.   Phelan and his bride Zasha had opted to honor both of their cultures with a wedding and a Mating ceremony. It was the biggest thing to happen among them since the move.

This blending of cultures excited her. As a healer she knew just how dire reproduction could become if their people didn't mingle and procreate. Joy filled her at the thought of Zasha's pregnancy. She'd been honored by being chosen as the midwife who would help deliver the young heir when the time came. It was the part of her job she loved most, aiding new life as it was born into the world.  When she reached the massive doors of the building and knocked, the sound echoed in the home on the other side of the wood.  A few moments later the door swung open and the young girl’s jaw dropped. "It's an honor to receive you, Star Priestess." She bowed, her blonde curls falling into her face. "Please come in."

"Thank you, Shena.” She returned the bow of respect she'd been shown.

"Phelan and Zasha have been expecting you." Shena stepped back and waved her inside.

She followed Shena inside, admiring the décor as they walked. She hadn't been inside this portion of the home since the house blessing, many years prior. A Star Priestess wore many hats. In human terms they were a mixture of a priest, a nurse, and a psychic. The sleek, modern choices of color and furniture screamed single male. Dark, muted, paint colors were paired with black furniture. She did see the occasional splash of feminine touches. Bright flowers in vases and pastel pillows told her Zasha was working her way in, slowly but surely.
Good girl.
Near the end of the hallway a strange tension settled over her.

A tingling sensation began in her cheeks and spread down along her collarbone, and then over the tops of her chest. It was a signal she knew well, her subconscious alerting her of what was to come.
Please do not let me have a vision right now.
Rivka had no control over what she saw, and the last thing she wanted to do was deliver bad news on what should be a happy occasion.  On edge, she clutched her oversized golden bag, squared her shoulders.
I’ll deal with it when it happens, no use borrowing trouble.
Shena knocked.

"Come on in," Phelan called. Shena walked in, and she followed. Phelan stood from the couch he'd been seated on beside Zasha. "Thank you, Shena." The girl curtsied and exited the room. He stepped forward to clasp her hand. “Rivka! It is so good to see you. It’s been much too long,” Phelan said.  The warmth in his voice and the relaxed stance made her smile. Being mated had worked wonders. His face looked years younger, he was relaxed, and his aura seemed more balanced.

“I’m honored that you want me to preside over your nuptials.”

“There was never any other choice.”

Her face flushed with pleasure as she looked down at the floor and gave a brief nod.  He helped the woman on the couch up.

Rivka curtseyed as she took in her future queen who rose from the dark brown suede couch. She was gorgeous, tall, and regal, with long, black hair and beautiful brown skin.

“Zasha, this is the Star Priestess Rivka. Rivka, this is my bride, Zasha.”

“It’s an honor to meet you,” Rivka said with a smile, placing her hands together as she bowed at the waist.

“Likewise, Rivka. I’ve heard so many wonderful things about you.” Zasha stepped forward and held out her hand, which Rivka shook. A jolt of electricity shot up between them, and Rivka gasped.

“You have a very special child. You’ve been blessed many times over recently.”

Zasha cast a nervous glance toward Phelan who moved to stand beside her.

“I want you to read Zasha and tell me what you see,” Phelan said.

With a nod of agreement Rivka viewed the woman in front of her. Their people’s aura tended to be shades of blue, while humans varied. Zasha’s was something she’d never seen. A strange blend of a blue outlined in gold.

“I don’t understand,” she whispered.

“Zasha is half Shar. We haven’t released the information yet, but it’ll come out eventually.”

“I believe this will prove to be beneficial for the fetus. The D.N.A. will be compatible, but I sense there’s more to this.” She grew quiet and waited for his response.

“Yes. Please take a seat, we’d like to discuss what’s been going on and see if you can use your gifts to find out more information.”

She sank down into the seat behind her, resting her bag on the floor beside her feet.
Now the unease I felt makes sense.

“I know you remember a man named Tavel.”

“The Shar who killed your parents?”

“The very same. We’ve discovered recently when he escaped he made his way here, leaving a trail of murder and experimentation in his wake.”

Images of test tubes and emaciated people, disfigured by tests, flashed in her mind. Her stomach rolled.  She swayed slightly as the world around her faded and she was thrust into a scene.

Strapped on to a table she trembled as the man with the dead blue orbs leaned over her.

“Be still, dear. It’ll only hurt for a moment,” he whispered. His gloved hand came down to stroke the hair away from her face. She held her breath, afraid he’d realize she’d woken. Fear threatened to choke her. He was mad. She’d been heading to her car after a long day of work when he’d grabbed her from behind, covering her mouth with a cloth that had an acrid smell that made her vision go black.

Rivka came back from the vision, shaken. Her vision was blurry. Her eyelids fluttered, and she squinted, moistening her dry mouth with saliva as she regained her ability to focus. She released a shaky breath, grateful to be away from the horrifying scene.

"Did you see something?"  Phelan asked, drawing her gaze to his anxiety-ridden face

"Yes, I was in his head … he kidnapped you?"  She glanced at Zasha.

"We haven’t seen the last of Tavel. He takes your union very personally." Rivka frowned, remembering the garbled mess of thoughts, anger, and pure evil. "He's quite mad."

"And dangerous," Phelan said. “We’ve been looking for him since we discovered he was here on Earth after Zasha was kidnapped. Any information you can tell us would be helpful.”

“What I saw was nothing more than a glimpse into his mind and that of one of his victims. I will meditate on this once I’m home and see if the spirits can tell me anything.”

Rivka stepped forward and gestured toward Zasha’s belly. “May I?”

She placed her hands on Zasha's belly, and she smiled as she picked up on the essence of the heir. The tiny embryo revealed itself as a male, who liked all things apple flavored, the sound of his parents’ voices, and music. She could see him as he would be one day. Skin the color of mocha, with a healthy splash of cream, almond-shaped green eyes that sparkled with mischief, and facial features that were a blend of both parents. She pulled her hand from Zasha's belly. "The baby is healthy, happy, and opinionated. It likes anything apple flavored and loves the sounds of mommy and daddy's voice along with music."