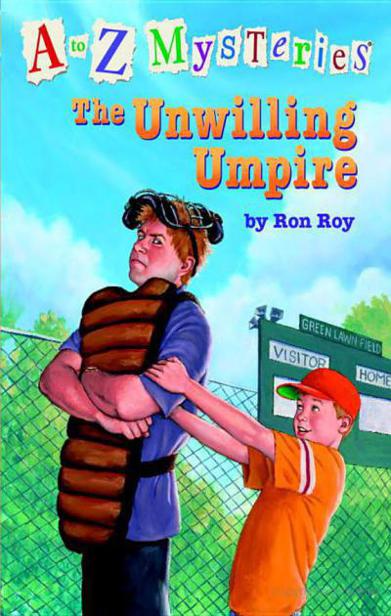 Here’s what kids, parents,
and teachers have to say
to Ron Roy, author of the
A to Z Mysteries series:

“I have never been hooked on to a series as much as this one.”

“You are such a good author, I think that every child and grown-up should read your books.”

“My favorite series is definitely no doubt, A to Z Mysteries!”

“Thank you so very much for allowing my child to peek into a world of adventure.”

“My students find the books extremely exciting, and they can’t put them down.”

This book is dedicated to Matthew Johnson.

To Tim, thanks for posing!

This book is dedicated to Matthew Johnson.
—R.R.

The baseball popped into the warm June air and rose slowly toward the sky. The crowd leaped to its feet, yelling, “Run! Run!”

Mr. Dillon, the school principal, dropped the bat and raced toward first base.

Dink, Josh, and Ruth Rose were sitting in the front row of bleacher seats.

Dink’s full name was Donald David Duncan, but his friends called him Dink.

“Having a baseball game to raise
money was a great idea,” Ruth Rose said.

The kids in Green Lawn had sold enough tickets to fill the bleachers at the town baseball field. The money would go to Camp Challenge, a summer camp for kids with special needs.

Out in center field, Josh’s mom watched the baseball as it started to fall. She raised her glove and the ball dropped neatly into it.

Mr. Dillon was out! He trotted back toward home plate.

“I didn’t know my mom could catch like that!” Josh said.

Dink grinned at Josh. “Too bad she couldn’t teach
you
how,” he said, giving Josh an elbow in the side.

“Gentlemen, yer out!” yelled Pete Unkenholz, the umpire at home plate,
motioning with his thumb. “Ladies, yer up!”

Pete was a tall, friendly guy with spiky blond hair. He was a good worker, too. He had helped set up the bleachers for the game.

Josh’s mom’s catch was the third out for the men’s team. The women ran off the field, high-fiving each other. The men began to take their positions on the field, joking with the female players.

Josh turned to Ruth Rose. “Want to make a bet the men beat the women?” he asked.

Ruth Rose nodded, making her black, curly hair bounce. She liked to dress all in one color. Today she wore red from her headband down to her high-top sneakers.

“Sure, I’ll bet you an ice cream cone that the women win,” Ruth Rose said to Josh.

The three kids watched the men take their positions. Their friend Mr. Thaddeus Pocket was head coach. He walked around the field, chatting with the players.

“How did Mr. Pocket learn so much about baseball?” Dink asked.

“He told me he played a lot in college,” Josh said.

“It was great of him to bring some of the baseballs from his collection to the game today,” Ruth Rose said.

“Yeah! I guess they’re worth a lot of money,” Dink added. “He let me hold the one signed by Babe Ruth!”

Six of Mr. Pocket’s autographed baseballs were on display in the clubhouse. Everyone who bought a ticket to the
game had a chance to admire them in the locked case.

The men were all in their field positions. Ellie was up first on the women’s team. She grabbed a bat and headed for the batter’s box. Pete smiled at Ellie and gave her a thumbs-up.

“Where did he come from?” Josh asked. “He just showed up a couple of weeks ago, right?”

Dink shrugged. “I don’t know, but everyone seems to like him a lot.”

“He sure is big,” Ruth Rose observed. “Look how he towers over Ellie!”

Ellie stepped up to the batter’s box. Everyone cheered as she got ready for the first pitch from Mr. Linkletter.

Behind Ellie, Jake, a local firefighter, was catching. He crouched with his mitt in front of his chin.

The pitch was low, but Ellie swung anyway. She missed and the ball zinged into Jake’s waiting glove.

“Strike one!” Pete announced as Jake tossed the ball to the pitcher. Mr. Linkletter wound up and threw his next pitch. This one was high, but Ellie swung and caught part of the ball. It skipped down the first-base line. Lucky O’Leary fielded the ball in foul territory and whipped it back to Mr. Linkletter.

The spectators jumped to their feet for the third pitch. Everyone was yelling, whistling, or clapping.

Pete raised his arms for quiet.

Mr. Linkletter’s third pitch was right in the strike zone. Ellie swung with all her might.

Ellie took off. By the time Officer Fallon ran down the ball and snapped it to Lucky O’Leary at first, Ellie was rounding second base. Lucky threw to Doc Henry at third.

But Lucky’s throw was wide.

When Doc lunged for the ball, Ellie made third base and kept running. With legs pumping and arms swinging, she thundered across home plate.

Everyone leaped into the air and yelled. Ellie had scored the first run for the women!

“Boy, the men are lousy fielders,” Josh grumbled. “My grandmother can catch better!”

Just then Pete Unkenholz started sneezing. He wiped his eyes, sneezed again, then turned to say something to the catcher. After a few seconds, Pete headed toward the clubhouse.

As Pete passed Dink, Josh, and Ruth Rose, he stopped for a second. “Darn allergies,” the young man said. His eyes were red, and he was taking deep breaths.

Pete trudged toward the clubhouse. The kids watched Mr. Pocket walk over to home plate.

“What’s going on?” they heard him ask the catcher.

“He went to get his allergy medicine,” Jake told Mr. Pocket.

Mr. Pocket made an announcement over the public-address system. The crowd relaxed and waited for the game to continue. But when Pete hadn’t returned after five minutes, people began to wonder what was going on.

Josh jogged to the clubhouse while the crowd waited for Pete to return.

Suddenly Josh came racing back to the bleachers. He slid in next to Dink, out of breath.

Ruth Rose looked toward the clubhouse. “Maybe Mr. Pocket moved them someplace else when the game started,” she said.

Josh was shaking his head. “No! The glass case is smashed in a million pieces,” he said. “Someone stole those balls!”

“Should we tell Mr. Pocket?” Ruth Rose asked after a few seconds.

The three kids walked over to Mr. Pocket.

Dark Benediction by Walter M. Miller
The Shadowed Path by Gail Z. Martin
No Weapon Formed (Boaz Brown) by Stimpson, Michelle
The Golf Omnibus by P.G. Wodehouse
The Suburban You by Mark Falanga
Unseen Academicals by Terry Pratchett
Last to Fold by David Duffy
A Knight Of Desire (Knights of Passion) by North, Evie
Life Swap by Jane Green
By My Side by Michele Zurlo