The Vault (A Farm Novel) 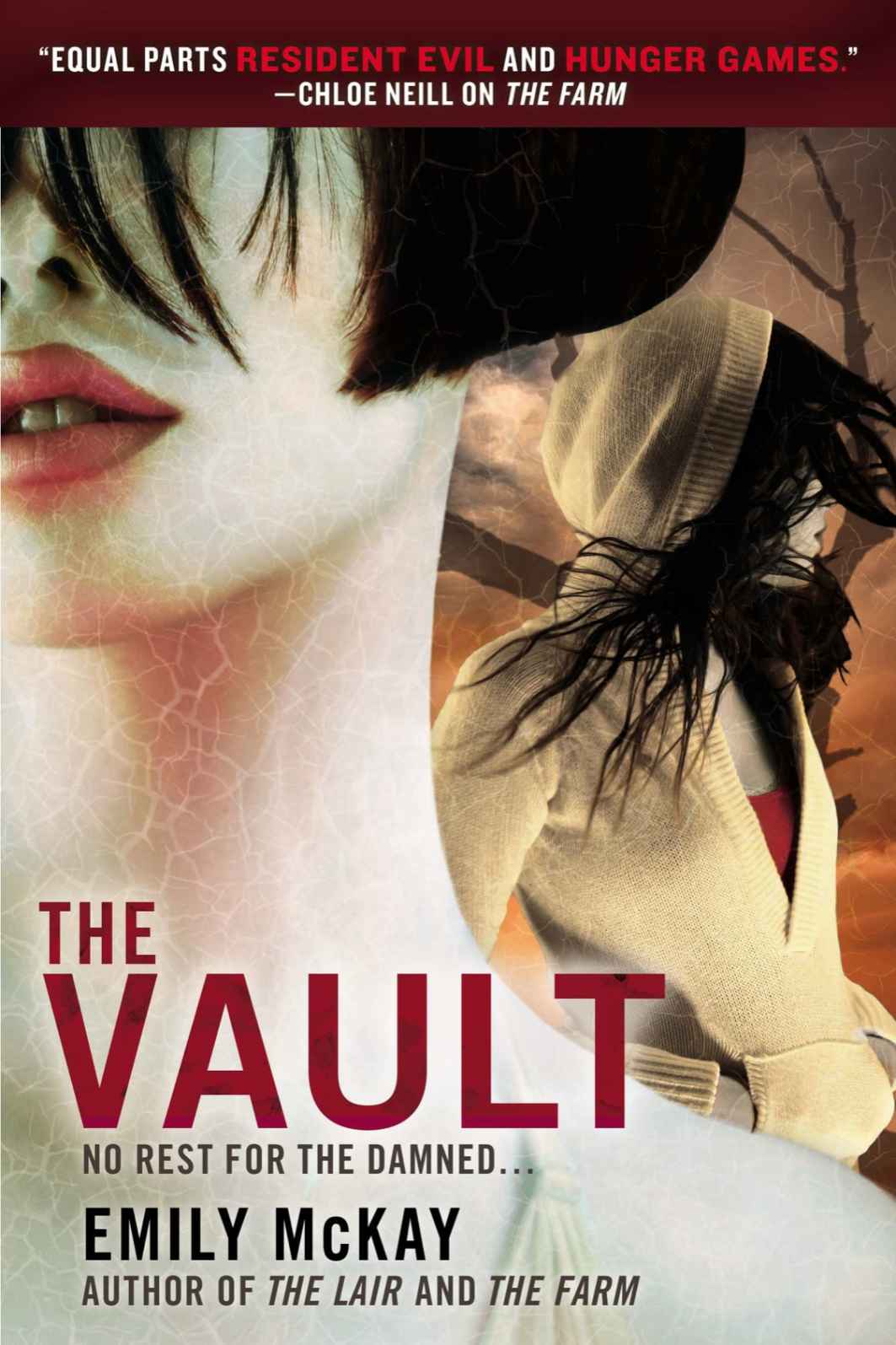 Praise for
The Lair

“McKay’s dark, fast-paced sequel to
The Farm
will appeal to both adult and YA fans of dystopian and vampire fiction. . . . The sisters and their friends are well-developed characters caught up in situations that demand extreme measures to survive.”

“If you’re looking for a gripping, action-packed, scary, and romantic dystopian—these books are definitely the right choice. I highly recommend!”

“As tension-filled and enjoyable as the first book,
The Lair
has plenty of surprises in store for readers.”

“McKay writes an exciting sequel that doesn’t have middle-book syndrome. . . . If you liked
The Farm
, you won’t want to miss
The Lair
.”

“
The Lair
definitely delivers with an astonishing story line and some exceptional twists.”

Praise for
The Farm

“Equal parts
Resident Evil
and
Hunger Games
—and just as thrilling . . . A gripping dystopian tale . . . a web of vampires, love, sacrifice, and survival.”

“Be prepared to stay up all night.”

“McKay’s phenomenally crafted characters—the true highlight of the book—will keep you waiting for the sequel.”

“
The Farm
is a tightly wound atmospheric thriller. . . . A very solid read that leaves you wanting more.”

BERKLEY® is a registered trademark of Penguin Group (USA) LLC.

The “B” design is a trademark of Penguin Group (USA) LLC.

For the Jellyfish—Skyler, Karen, and Jax

Long ago, when we first started brainstorming together, we decided writing a book was like boxing a jellyfish. I no longer remember if we meant it was like fighting a jellyfish or like trying to wrestle one into a box. Either way, this jellyfish would never have been boxed without you. Thank you!

Last year, when
The Farm
won the RITA award for Best Young Adult novel, I blanked and totally forgot to thank my husband and family. So this time, that’s where I need to start. Thank you, Greg, Adi, Henry; you guys are the best! Thanks, Greg, for reading the series and loving it. Thanks for never hesitating to pimp the books, and for calling friends on a Saturday to ask them questions about what kind of fuel single propeller planes take and how hard it will be to find in the apocalypse. Henry, thanks for telling everyone you know that your mommy is a famous author and for thinking it’s cool that I have blue hair. And Adi my dear, thank you for helping me brainstorm things you can kill a vampire with. It’s a disturbing predilection in a nine year old, but it’s somehow proof you’re mine.

Thank you to my completely fabulous editor, Michelle Vega. Have I told you lately how much I love working with you? You are a joy to chat with, to bounce ideas off of, and to hang out with. These books would not be
these
books without you. Also, thanks to everyone at Berkley who has worked on the series, and this book in particular. Thanks to Martin Karlow, my copyeditor, for keeping me honest and grammatically correct. Thank you to Courtney Wilhelm Vincento, production editor. Thanks to Lesley Worrell in the art department for working tirelessly to make this cover amazing! I love you guys!!!

Jessica, I hope that after our nine years together, you don’t need me to tell you how much I love working with you, but if you do need to hear it, well, here it is: you are fun and you get me and I could never have written these books without you. You are tough and unflinching in your criticism, but you know when it’s right. Plus, you’re so dang fun to work with. Thanks for putting up with me!

Thanks to my writer buddies: Robyn DeHart, Tracy Wolff, Shellee Roberts, Sherry Thomas, Hattie Mae, Skyler White, Karen MacInerney, and Jax Garren. You guys rock. I wouldn’t have the strength to come back to the keyboard day after day without you. How did Jane Austen do it alone?

And this time around, I owe an extra-big thanks to my beta readers: Carine, Melanie, Joey, and Brandi. You guys were great! Thanks for the feedback. Joey, when I really needed a boost in confidence, you were there, cheering me on and loving the book. Brandi, thank you for taking such good care of my baby! I love the playlist you made. I love that you love my characters so much. When the writing got tough and I despaired of ever getting the revisions just right, I’d flip through the notes you made and remember that there are fans who love the characters as much as I do, and I’d know that I needed to keep working. I hope you all love the final version. You guys made this book!

And finally, thanks to my good friend Misty Baker. You are the only person I know who loves Pemberley Digital like I do. I feel like we’re soul sisters! Let’s plan that sleepover soon, okay?

Some parts of the country had fallen by inches. Places where the virus spread slowly and the human population held their own against the Ticks and against the fear for at least a little while. Those places lost their battles incrementally. Not Texas. In just a few short weeks, Texas went from being the second-most-populated state to being the least. Texas fell in a blaze of blood and gunfire.

It wasn’t just the genetically mutated monsters that did Texas in. It was the Texans. We turned on one another.

I’d told myself over and over again that I wouldn’t make the same mistake. That if it had been me, if I’d been the one with my finger on the trigger, staring down a friend or a relative, I would do things differently. I would have a little faith in humanity.

Turns out, I was wrong.

There in the basement of Genexome Corporation—the company that engineered EN371, the virus that created the Ticks—I finally got it. When the life of someone you love is on the line, trust is almost impossible. Under the right circumstances, anyone will crack. Yeah. I admit it. I cracked.

The deserted hallway with flickering lights and spooky cobwebs creeped me out. I got that hairs-up-on-the-back-of-the-neck sensation that I wasn’t alone. And, oh yeah, the pile of dead bodies that I’d had to haul out of the way to clear a path down the hall? Those didn’t help.

Which is why I pulled a gun on Mel when she crept up behind me. One second I was staring at the LCD panel for the storage facility’s security system. Tech stuff, wasn’t really my thing, but I was trying. That’s when I heard it, the faintest scuff of a shoe behind me. Too subtle to be an animal or a Tick. Too soft to be someone who wasn’t trying to sneak.

Somewhere down the hall, someone was coming up behind me and whoever it was didn’t want to be heard. I deliberately kept my breathing steady as I slipped my hand into the coat pocket where I kept my Glock. I wrapped my hand around the grip and pulled it out, spinning as I thumbed off the safety.

My finger was already on the trigger when I realized it wasn’t some unknown enemy sneaking up behind me. It was Mel.

My girlfriend’s twin sister. My friend.

I pulled the gun up, finger off the trigger, and held up my other hand. But she was faster than I was. My aggression provoked something in her. The instant she saw the gun, she dashed down the hall and rammed into me. The force of the impact knocked me off my feet. I tried to roll into the fall, but ended up just getting slammed to the floor with her on top of me. My hand hit the floor again and I instinctively let go of the gun. It skittered away from me. Agony flared out through my back and chest. Damn, she moved
fast
.

Mel bounced back up and landed in a crouch maybe five feet away, hands curled into claws, fangs bared and gleaming in the fluorescent lights.

I got my hands under me and tried to sit, but my whole body pulsed with pain and it was all I could do not to groan. My neck throbbed. When I brought my hand up to the spot, my fingers came away sticky and damp with blood.

Panicked adrenaline shot through me and I scampered back. Yeah. I know. Scampering isn’t exactly manly, but trust me, when your neck is bleeding and a hungry vampire is crouching five feet away from you, you do anything you can to get away. Even when it probably won’t make a difference.

Heart pounding, I pressed myself against a concrete support beam in the hallway. I didn’t have any weapons. My gun—even if it wasn’t closer to her than to me—would barely faze her. I didn’t have anything handy that would actually stop her. No stake. No blade.

Besides, it was
Mel
.

There was no way I was going to hurt her, let alone stake her and chop off her head. Which was a moot point, anyway, because if she wanted to kill me she would have done it already.

Pressing one hand to my neck to stanch the flow of blood, I held my other out in supplication. “Mel,” I said slowly, persuasively. “Calm down. It’s me. Carter.”

Jesus, I hoped this would work.

Theoretically, I was an
abductura
. Which meant I had the power to superimpose my own emotions over hers. Theoretically.

Problem was, I didn’t know jack about how to actually use my powers. At least not consciously. So either this would work, or I’d end up as a midnight snack.

God, I just love the apocalypse.