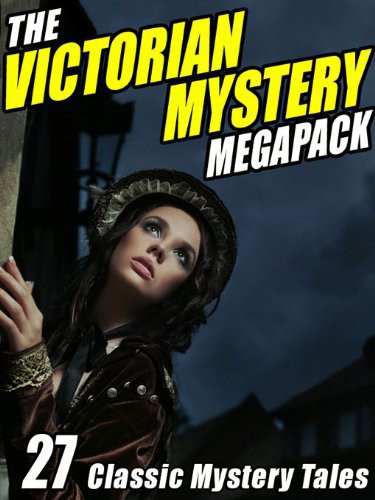 A NOTE FROM THE PUBLISHER

A NOTE FROM THE EDITORS

THE HOUSE OF CLOCKS, by Anna Katharine Green

A JURY OF HER PEERS, by Susan Glaspell

THE DONNINGTON AFFAIR, by G.K. Chesterton and Max Pemberton

THE ADVENTURE OF THE HERALD PERSONAL, by John Kendrick Bangs

THE BURGLAR’S STORY, by W.S. Gilbert

CHEATING THE GALLOWS, by Israel Zangwill

THE RETURN OF IMRAY, by Rudyard Kipling

PROBLEM OF THE STOLEN RUBENS, by Jacques Futrelle

THE BLACK BAG LEFT ON A DOOR-STEP, by Catherine Louisa Pirkis

THE MYSTERY OF THE FIVE HUNDRED DIAMONDS, by Robert Barr

THE CASE OF ROGER CARBOYNE, by H. Greenhough Smith

THE LAWYER’S STORY OF A STOLEN LETTER, by Wilkie Collins

THE CROOKED TELLER, by J.P. Buschlen

THE PROBLEM OF DEAD WOOD HALL, by Dick Donovan

THE BISHOP’S CRIME, by R.C. Lehmann

THE MOONSTONE, by Wilkie Collins (Part 1)

THE MOONSTONE, by Wilkie Collins (Part 2)

THE MOONSTONE, by Wilkie Collins (Part 3)

THE MOONSTONE, by Wilkie Collins (Part 4)

THE MOONSTONE, by Wilkie Collins (Part 5)

THE HOUND OF THE BASKERVILLES, by Arthur Conan Doyle (Part 1)

THE HOUND OF THE BASKERVILLES, by Arthur Conan Doyle (Part 2)

For more information, see www.wildsidepress.com,
or contact us through the Wildside Press forums at:

A NOTE FROM THE PUBLISHER

Over the last year, our “Megapack” series of ebook anthologies has proved to be one of our most popular endeavors. (Maybe it helps that we sometimes offer them as premiums to our mailing list!) One question we keep getting asked is, “Who’s the editor?”

The Megapacks (except where specifically credited) are a group effort. Everyone at Wildside works on them. This includes John Betancourt, Carla Coupe, Steve Coupe, Bonner Menking, Colin Azariah-Kribbs, A.E. Warren, and many of Wildside’s authors…who often suggest stories to include (and not just their own!).

A NOTE FOR KINDLE READERS

The Kindle versions of our Megapacks employ active tables of contents for easy navigation…please look for one before writing reviews on Amazon that complain about the lack! (They are sometimes at the ends of ebooks, depending on your reader.)

Do you know a great classic science fiction story, or have a favorite author whom you believe is perfect for the Megapack series? We’d love your suggestions! You can post them on our message board at http://movies.ning.com/forum (there is an area for Wildside Press comments).

Note:
we only consider stories that have already been professionally published.
This is not a market for new works.

Unfortunately, as hard as we try, a few typos do slip through. We update our ebooks periodically, so make sure you have the current version (or download a fresh copy if it’s been sitting in your ebook reader for months.) It may have already been updated.

If you spot a new typo, please let us know. We’ll fix it for everyone. You can email the publisher at [email protected] or use the message boards mentioned above.

The Wizard of Oz Megapack

A NOTE FROM THE EDITORS

The theme of this Megapack is classic mystery and crime fiction from the Victorian era. We have taken the liberty of extending the qualifying publication dates to the end of World War I, since that event marked more of a turning point in world literature than the advent of the Edwardian Age. Certainly the spirit of Victorian crime fiction continued beyond Queen Victoria.

We include only one Sherlock Holmes story herewith,
The Hound of the Baskervilles
. Sir Arthur Conan Doyle’s works are readily available; if you haven’t read them, we urge you to do so.

Experienced Holmesians will surely pardon us for having fun with Sherlock and including a few rare parodies and pastiches, as they are “of the era.” There is even a Holmes-Raffles “crossover” story, as the son of Sherlock Holmes (who also happens to be the grandson of A.J. Raffles) has an adventure in New York City, as only John Kendrick Bangs could tell it! (Bangs also contributes an adventure featuring
Mrs
. Raffles.)

Other stories of interest include two of Violet Strange’s cases, penned by Anna Katharine Green (who has the distinction of being the first American woman to write detective novels); “The Donnington Affair,” by G.K. Chesterton and Max Pemberton, a rare Father Brown mystery which is omitted from most collections of Chesterton’s works; and “The Lenton Croft Robberies,” by Arthur Morrison, the first of “Martin Hewitt’s Chronicles,” which were originally collected in 1896.

We also include a humorous tale of a burglar by W.S. Gilbert (half of the Gilbert & Sullivan team, of whose collaborative work we remain fond), and Wilkie Collins’ enduring classic,
The Moonstone
, which every mystery fancier
must
read at some point.

Those who retain any memory of the great law cases of fifteen or twenty years back will remember, at least, the title of that extraordinary will case, “Bartley
v
. Bartley and others,” which occupied the Probate Court for some weeks on end, and caused an amount of public interest rarely accorded to any but the cases considered in the other division of the same court. The case itself was noted for the large quantity of remarkable and unusual evidence presented by the plaintiff’s side—evidence that took the other party completely by surprise, and overthrew their case like a house of cards. The affair will, perhaps, be more readily recalled as the occasion of the sudden rise to eminence in their profession of Messrs. Crellan, Hunt & Crellan, solicitors for the plaintiff—a result due entirely to the wonderful ability shown in this case of building up, apparently out of nothing, a smashing weight of irresistible evidence. That the firm has since maintained—indeed enhanced—the position it then won for itself need scarcely be said here; its name is familiar to everybody. But there are not many of the outside public who know that the credit of the whole performance was primarily due to a young clerk in the employ of Messrs. Crellan, who had been given charge of the seemingly desperate task of collecting evidence in the case.

This Mr. Martin Hewitt had, however, full credit and reward for his exploit from his firm and from their client, and more than one other firm of lawyers engaged in contentious work made good offers to entice Hewitt to change his employers. Instead of this, however, he determined to work independently for the future, having conceived the idea of making a regular business of doing, on behalf of such clients as might retain him, similar work to that he had just done with such conspicuous success for Messrs. Crellan, Hunt & Crellan. This was the beginning of the private detective business of Martin Hewitt, and his action at that time has been completely justified by the brilliant professional successes he has since achieved.

His business has always been conducted in the most private manner, and he has always declined the help of professional assistants, preferring to carry out himself such of the many investigations offered him as he could manage. He has always maintained that he has never lost by this policy, since the chance of his refusing a case begets competition for his services, and his fees rise by a natural process. At the same time, no man could know better how to employ casual assistance at the right time.

Some curiosity has been expressed as to Mr. Martin Hewitt’s system, and, as he himself always consistently maintains that he has no system beyond a judicious use of ordinary faculties, I intend setting forth in detail a few of the more interesting of his cases in order that the public may judge for itself if I am right in estimating Mr. Hewitt’s “ordinary faculties” as faculties very extraordinary indeed. He is not a man who has made many friendships (this, probably, for professional reasons), notwithstanding his genial and companionable manners. I myself first made his acquaintance as a result of an accident resulting in a fire at the old house in which Hewitt’s office was situated, and in an upper floor of which I occupied bachelor chambers. I was able to help in saving a quantity of extremely important papers relating to his business, and, while repairs were being made, allowed him to lock them in an old wall-safe in one of my rooms which the fire had scarcely damaged.

The acquaintance thus begun has lasted many years, and has become a rather close friendship. I have even accompanied Hewitt on some of his expeditions, and, in a humble way, helped him. Such of the cases, however, as I personally saw nothing of I have put into narrative form from the particulars given me.

“I consider you, Brett,” he said, addressing me, “the most remarkable journalist alive. Not because you’re particularly clever, you know, because, between ourselves, I hope you’ll admit you’re not; but because you have known something of me and my doings for some years, and have never yet been guilty of giving away any of my little business secrets you may have become acquainted with. I’m afraid you’re not so enterprising a journalist as some, Brett. But now, since you ask, you shall write something—if you think it worth while.”