Read The Vogue Factor: The Inside Story of Fashion's Most Illustrious Magazine Online

The Vogue Factor: The Inside Story of Fashion's Most Illustrious Magazine 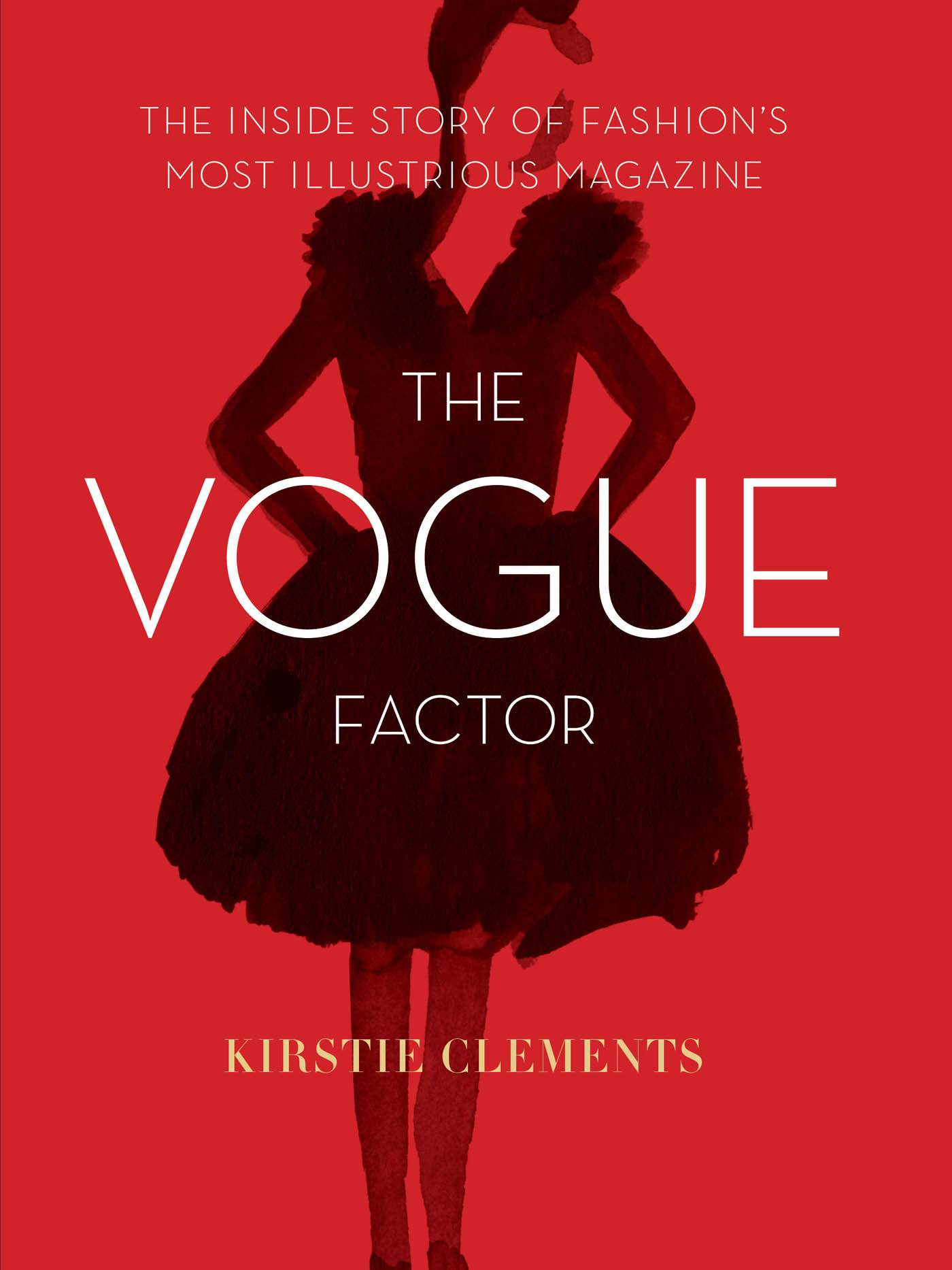 Copyright © 2013 by Kirstie Clements.
All rights reserved. No part of this book may be reproduced in any form without written
permission from the publisher.

I
t was 10 a.m. on a Wednesday. I had a scheduled meeting with Nicole Sheffield, the newly appointed CEO of NewsLifeMedia, the company owned by Rupert Murdoch that had held the license for
Vogue
in Australia since 2007. We had met only once before, a quick and pleasant chat in her office in March a few weeks after she had started.

I had been working at
Vogue Australia
for twenty-five years and in the editor’s chair for thirteen. She was my eighth CEO. Magazines were going through a tough time in the face of a digital onslaught, but
Vogue
was faring better than others. Circulation was steady, subscriptions and readership were at an all-time high, we reached our advertising targets each month and held the greater market share. We had also been voted Magazine of the Year the previous November at the annual Australian Magazine Awards, and were commended by industry leaders for our consistent excellence, innovation and quality. Given that Nicole had less experience in luxury publishing, in particular
Vogue
, I anticipated she would value my input.

I took the elevator up to the second floor without any inkling of what was about to happen. Her assistant looked jumpy.

“Hi, I’m here for my meeting with Nicole,” I said cheerily.

“Yes, they’re in there,” she said, pointing towards a usually unoccupied office, quite clearly not Nicole’s. Something was up.

The realization began to dawn. It dripped down from my head to my toes in slow motion, as if treacle had been poured over me. I walked in and saw the human resources director sitting at the table with a folder and a jug of water, one of those cheap ones pretending to be a Georg Jensen. The presence of HR always meant bad news. Nicole was shifting in her chair, shooting longing glances at the open door—clearly in a hurry to do what she had come here for. I knew exactly what was going to happen.

“I’m sure this is a shock, but I just think we need new leadership,” Nicole said in rapid-fire. “Condé Nast are in full support of this.” Condé Nast International is the parent company of
Vogue Australia
, and an organization I had developed a strong relationship with over the years. Nicole repeated that Condé Nast knew all about it, probably thinking I was going to put up a protest and try to get the chairman, Jonathan Newhouse, on speed dial.

But for some reason I felt strangely relieved. There had been increasing pressure on the brand, with reduced budgets and pages, and the retrenching of crucial editorial staff. The holy mantra was “digital” and we had been waiting endlessly for funding to progress and evolve, but it felt as if the magazine itself was regarded as a burden. No one wanted to listen to my views on the importance of maintaining quality or protecting the brand. Not even Condé Nast. I was however, stunned by their lack of loyalty. Obviously their main interest was the licensing checks.

I decided not to let a wonderful, stimulating quarter-century at
Vogue
be diminished. How you conduct yourself on the way out is more important than how you went in. It didn’t occur to me to ask who the new “leader” would be. I really didn’t care. Nicole had at this point left the room anyway, and I was faced with a scarlet-faced HR director who instructed me to leave the building immediately without speaking to my team—my amazing and loyal colleagues, some of whom I had worked with for more than thirteen years, and many of whom would also be shown the door shortly afterwards.

The whole episode was devoid of any graciousness, and perfectly reflective of a new mood in publishing. As I picked up my handbag and walked out the door, I turned my phone on silent and braced myself for the media who would swoop like vultures.

The
Vogue
I knew was over.

1
NOT YOUR AVERAGE DESK JOB

I
had two priorities after I finished high school. One was to get out of the Sutherland Shire, the conservative, soporific area south of Sydney, Australia, where I grew up. Two was to write.

I found the conformity in my hometown stifling, and so decided that I should move to what appeared to be the least conformist suburb in Sydney: Kings Cross. In 1979 I broke the news to my mother at the age of seventeen that I was going to move into my own apartment. Although she had reservations about the seedy neighborhood I had chosen, Mum knew I could take care of myself. My adventurous streak told me that travel rather than university was what I needed, so I set my sights on getting out of there as soon as I could.

I applied for a job advertised in the newspaper and became a stockbroking clerk. It was a boom time for the market, and a number of lucrative bonuses enabled me to travel in Europe for one year at the age of eighteen, then again at twenty-one. No backpacks—I would like to clarify that straight away. No hippie stuff. Always a suitcase. And always in full makeup.

I wrote constantly when on the road, short stories just for myself; in hotel rooms in Rome, on trains to Berlin, in hostels in Athens and bedsits in London. I traveled until the money ran out.

By 1985 I had returned to Sydney and was working as a sales assistant at an arty bookshop. My boyfriend at the time was running the famous Chauvel Cinema in Paddington, so I would leave work in the afternoon and join him in the evening, selling tickets or running the bar. It was an exciting, formative period. I read books all day and saw almost every important film ever made at night. I became immersed in French Nouvelle Vague, Japanese porn, film noir, Visconti and Fassbinder. Actors such as Judy Davis would come into the store to buy poetry and plays.

But I was twenty-three, and dusting the books was getting on my nerves. One day during my lunch break, I scanned the Jobs Vacant section of the
Sydney Morning Herald
and there was a tiny advertisement. “Receptionist wanted at
Vogue
.”

“Imagine,” I thought to myself. “Imagine the world that would open up!”

I rang the number numerous times until—bingo—I scored an interview. As I could not leave the bookstore until 5 p.m., I was to be the last candidate interviewed the next day, at 6 p.m. I rushed home after work to shower, put on the best dress I owned and a pair of pink ballet slippers, and took a taxi I couldn’t afford to make sure I would be right on time.

Vogue
at that time was housed in a charming older building in Sydney, spread across a number of floors, all serviced by a clanking elevator operated by a driver called Col. I sat down for my interview with a woman named Norma Mary Marshall. She was probably in her mid-sixties and absolutely stunning. She had bright-blue
eyes, an elegant puff of white-blonde hair and a knockout pair of legs. She’d worked at
Vogue
forever and was—I discovered later—quite the party girl. I never knew what her exact role was, but it might as well have been something like “glamorous ambassador.” She was sipping from a bone-china teacup that I’m pretty sure was filled with gin. I liked her on sight.

Norma Mary asked me if I had ever worked a switchboard. I lied and said, “Of course.”

“Well, I’ve seen twenty girls, and you’re the last but you’re the prettiest,” she said, and we laughed. “But I’ve already decided on someone else, so I think I’ll put her on for a week and then you for a week, for a trial.”

I don’t know what made me say it, as I was terribly nervous, but I replied: “Why don’t you put me on first? If I work out, then I can just stay and it will save you the trouble.” I was in.

A week or so later I was sitting at the
Vogue
reception desk. I hadn’t been able to sleep the night before from nerves and excitement. It appeared that absolutely every individual who worked in the building was fabulous. Nobody
walked
past my desk, they swept past, jackets flung over shoulders, silk scarves flying out behind them. Everyone was always in a very dramatic and stylish rush to be somewhere else.

The editor-in-chief at the time was June McCallum, who was feared and revered. Fiercely intelligent and equally impatient, June was famous for getting straight to the point. She had spent many years working as a journalist in London and had a view on far more than just fashion. She also had a closed-door policy, and people would wait nervously for days for an appointment to see her. The only contact I had with June for my first six months at
Vogue
was to catch a glimpse of her through the glass, swishing past on her way to the elevator, a formidable brunette with her signature wooden bangles rattling loudly.

The fashion office was on the ground floor, to the right of reception, and that was where all the action happened. I had managed to master the very basic switchboard in about five minutes on Day One, so I was sitting excitedly at the desk, anticipating all kinds of wild and improbable happenings, when an incredibly handsome young man walked in and handed me his modeling portfolio. And then another. And then another. Soon the area had filled up with gorgeous male specimens, who sat casually on the seagrass-matting floor making small talk between themselves, as well as to me, when the chairs had run out. Day One and, as luck would have it, it was male model casting day.

Then came the delivery of all the latest international fashion magazines, to be handed out to stafflater. I could read any or all of them. Clothes were being constantly delivered by couriers and
Vogue
staff members kept darting by, shooting me dazzling, friendly smiles.