The Void of Mist and Thunder (The 13th Reality #4) 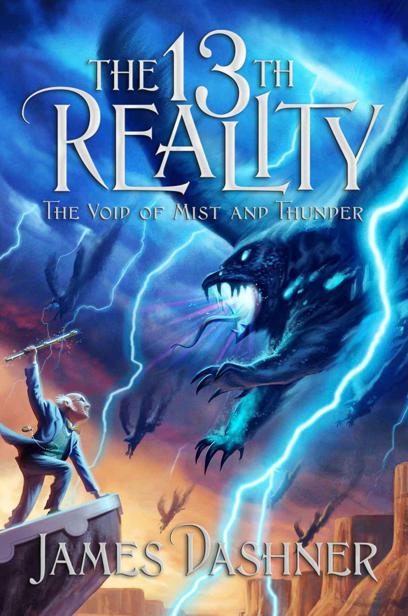 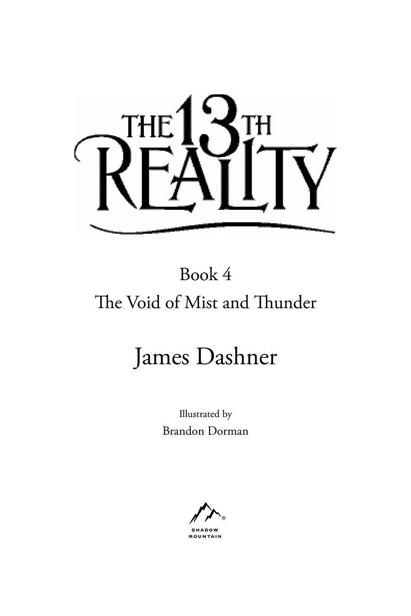 © 2012 James Dashner.
All rights reserved. No part of this book may be reproduced in any form or by any means without permission in writing from the publisher, Shadow Mountain
®
. The views expressed herein are the responsibility of the author and do not necessarily represent the position of Shadow Mountain.

The void of mist and thunder / James Dashner.

Summary: When an all-consuming void from the Fourth Dimension opens up, unleashing monsters throughout the Realities, Master George has one last weapon at his disposal—the mysterious and powerful Karma button, which might be even more dangerous than anyone imagined.

Other Books by James Dashner

Book 1: The Journal of Curious Letters

Book 2: The Hunt for Dark Infinity

Book 3: The Blade of Shattered Hope

A Mutiny in Time

This one is for the Storymakers.

You know who you are.

A Gash in the Forest

A Formidable Foe
One Last Try
Concerns
Squishy Grass
Poor Mr. Chu
Tricks on the Beach
One Question
A Dusty Road
Probing
A Pond in the Snow
Creatures
Words on Ice
Watching TV
The Ladies of Blood and Sorrow
A Rush of Violence
Finding Tick
Cords of Light
Fighting the Void

A Nap on the Couch

A Nice Morning Stroll
A Tense Conversation
A Rebound of Power
A Pulsing Light
Ill Reunion
Poor Little Centipede
One with Reality
Good and Evil
Brainpower
A Little Help, Here
I Amaze Even Myself
Box in a Circle
Bending and Warping
Odd Couple
Holding Hands
Down Below
Overrun
A Horde of Creatures
Let’s Move
The Furious Beat of Wings
Gashes in the World
A Reason
Wall of Wind

A Good-Bye
Rest and Relaxation
A Gift from Friends
The Magic Silver Cube
Enlisted in the Army
Two Different Enemies
A Glimpse of Rutger
A Dead Body
Becoming One
An Absence of Sound
One Month Later
The First Meeting
A Glossary of People, Places, and All Things Important
Discussion Questions

I can’t believe the series has come to an end. It’s been a long and sometimes tough journey, but I’m so proud of the story and thankful to the people who helped push it through to the finish. Particularly Chris Schoebinger and Lisa Mangum. Without them it absolutely never would have happened. Much appreciation to all my other friends at Shadow Mountain too.

As always, I’d like to thank my agent, Michael Bourret, for his tireless work.

Thanks to Liesa Abrams and all the good folks at Simon & Schuster for believing in the series enough to take it to a larger stage. Here’s to many more people discovering the adventures of Tick and the other Realitants.

It was all about the soulikens.

Master George sat in his study, the lights dimmed, Muffintops purring in a corner, the first light of dawn’s birth still an hour off. He stared at the wall as if the most fascinating thing in the Realities had been stapled there for him to see whenever he wished, but it was only a knot in the wood of his paneling. A knot that had two eyes and a mouth if you looked at it just right, and for some reason it reminded him of a boy named Atticus Higginbottom.

Atticus. Tick. The young man who changed everything.

The boy who’d disappeared from existence.

It was a shame. More than a shame. It was a downright tragedy. Master George had never ached in his heart so much for someone lost. Right when they’d finally begun to understand why the boy had such extraordinary powers, why he was able to harness and use Chi’karda as if he were himself a Barrier Wand—and a powerful Wand at that, even more so than Mistress Jane, who had a unique and tragic story of her own—he was gone.

But none of that really mattered anymore. It wasn’t the
reason
George missed Master Atticus so much. He missed him—ached for him—because the boy had become like a son to him. So innocent, yet brave. So genuine. Such a kid, but so grown up. Oh, how he missed that dear, dear boy.

He was a wonder.

Sato had completed the mission George had asked of him. He had visited each Reality and searched until he had found the same thing in each one: a grave for the Alterants of Atticus Higginbottom—the boy’s “twins” in the other twelve Realities. Never before had such an odd coincidence occurred, where only one version of a person remained throughout all the Realities. They’d never know if there was some deep cosmic reason behind it, or how it had happened.

But one thing was for certain: every one of those Alterants’ soulikens had traveled to and collected within the body of the one remaining Atticus who had lived in Reality Prime. It had changed his structure, his makeup, his quantum mechanics. He was full of Chi’karda, filled beyond measure with the powers that bound and controlled the universe. Filled beyond anything mankind could ever hope to recreate or dream about.

He was lost now, gone from existence.

There’d probably never be another quite like him, in far more ways than one.

George called for Muffintops. He needed to hug a friend.