Read The War of Odds Online

The War of Odds 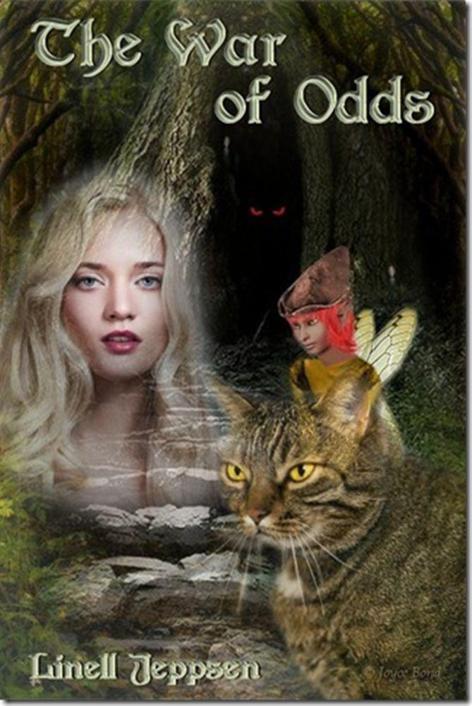 The War of Odds

This e-book is licensed for your personal enjoyment only. This e-book may not be re-sold or given away to other people. If you would like to share this book with another person, please purchase an addition copy for each recipient. If you are reading this book and did not purchase it, or it was not purchased for your use only, then please contact the author and purchase your own copy through the recognised channels.

I want to dedicate this book to my husband, Dan. He gave me so many ideas and kept me on track - gently reminding me where the book was SUPPOSED to go when I got lost! He is not only the best husband in the world, but he has a keen ear for adverbs, run-on sentences and other literary pit-falls that plague me when the muse takes over!
I love you, Danny.

A big thank you to Joyce Bond, for her superb artwork on the cover and to J Bryden Lloyd for his editing.

I also want to thank my readers. You keep me going!

Sara Giddings stared in the mirror and wondered what her new school would be like. Would she be able to make friends this time, or would she be alone with only her father for company? She sighed and ran a brush through her hair. She knew that she needed to try…to do better than she had in the past, for her father’s sake, if not her own. Since her mother, Lynette, was killed two years ago in an accident with a drunk driver in Denver, Colorado, Sara had been on a path of self-destruction.

She and her father, both.

Cast adrift in a fugue of sorrow and loss, Sara and her dad floundered in an ocean of sorrow.

Thomas, who had given up drinking alcohol when Sara was born, started drinking again after his wife’s funeral. Sara, confused and angry at the forces that took her beloved mother away and turned her father into a drunk, started hanging out with the druggies in her freshman class and soon after, started skipping class altogether.

Looking back now, Sara understood that she basically skipped being fifteen years old

and only regained awareness and the will to live again about a year ago, when her dad told her to pack her bags because they were moving to North Dakota.

Thomas was an engineer and followed ore-drilling operations around the country. North Dakota was home to a highly productive silver mine and he had been hired to oversee exploratory tunnel drilling.

Sara fought, ranted and raved, but her father was adamant. He was no fool.

Although the amber glow of bourbon warmed the empty place left in his heart after the death of his wife, Thomas was sober enough each morning to see the hollow stare in his daughter’s eyes, and the after-effects of too much wine and pot on her pale skin and in her shaking fingers.

Father and daughter, both of them grieving and slightly hung-over from their individual going-away parties, left Denver one morning in late February, heading north into the frozen wastelands of North Dakota. Sara was enrolled in the local high school for approximately eight weeks when her father informed her they were moving again, this time to a tiny town in the northeast mountains of Washington State.

She had not even begun to make new friends. With her long blonde hair teased into a rat’s nest around a pale thin face, and the heavy black eye-liner that encircled eyes that were as aquamarine as a tropical ocean, Sara found herself surrounded with hostility at her new high school. Most of the girls clung to their boyfriends in a jealous rage, and the boys followed her with their eyes, dumbfounded with admiration at the exotic creature that had landed in their drab surroundings like a tropical bird.

Sara hadn’t even unpacked when Thomas said it was time to leave again.

She shrugged, took her heavy sweaters down from the top shelf of her bedroom closet, rolled her long skirts into tubes and stuck her leggings and underwear into an old satin purse of her mothers. She was ready to go. It took one day for the two of them to load their personal belongings into a U-Haul trailer, three more to travel the snowy highways and mountain passes into Washington State, and one more day to unpack into their new home. It was May 9th.

The house that was provided to them by the mine was excellent, as far as Sara was concerned.

It was on mine property and had once been a vacation dwelling belonging to a wealthy landowner, before the mine moved in and scooped up all the property rights. The log cabin had old, but well-maintained wooden floors and large windows that framed the mountains and valleys below it, like a painting come to life.

It smelled like a mixture of rotten wood and mice when they first walked in the door, however. Sara saw her father’s face fall, but she picked up a broom from the kitchen’s pantry, found a mouse nest and a few fat spider webs, and swept them out the door. She watched, out of the corner of her eye as her dad took a bottle of bourbon out of a paper bag.

Then she saw him hesitate and set the bottle in a cupboard over the refrigerator before stepping outside.

As she took Windex and paper towels to the picture window, Sara saw Thomas walk into an open-ended woodshed, grab a maul and start chopping wood for a fire.

Shivering, Sara buttoned her mother’s old sweater and opened the woodstove to see if it needed cleaning. She sat back on her heels with a gasp as a flurry of feathers stirred a cloud of ash into her face and out onto the floorboards. She saw a brilliant flash of red and heard the intruder’s squawk of fear as it made its way up the stovepipe and out into the sky above.

Sara peered into the stove and saw a nest in amongst the ashes. Three tiny beaks opened and closed in an appeal for food. The babies looked so helpless and filthy with soot that she knew she had to do something, so she ran her hands through the ashes to disguise her human smell and picked the whole nest up in her hands. Moving slowly, she carried the baby birds outside and walked toward the tall pine and fir trees that bordered the pretty but frozen and over-grown yard. Looking up, Sara saw a shadow pass overhead, and heard a croak of fear from the mother bird.

Not wanting to worry the poor thing more than it already was, Sara found the stump of an old tree and placed the nest beside it on the ground. All three of the little beaks were pointing toward her now as if she was their mother, and it was her duty to feed them. She backed away, hoping that the creature’s real mom would know what to do.

Her father was standing still, watching, and he called out, “What have you got there?”

Sara shook her head and answered, “A bird’s nest, Dad, with three baby birds in it. I was trying to get the stove ready for a fire and found them there.”

Thomas shook his head. “Nice try, honey. I don’t know if the mother will claim them now, but you can hope.” He stopped talking, and stared off into the distance for a moment. “Sara, can you ever forgive me?”

Sara’s heart skipped a beat. Her father was a good person, she knew. His heart had been ripped in two when Lynette died, but that was no excuse to leave his daughter behind to cope with the loss on her own, was it?

Sara suddenly realized that she had been angry ever since her mom was killed… angry and filled with grief over the loss of her father, as well as the death of her mother.

It was rage, fear and sorrow that colored her soul and sent her in to a downward spiral of drugs and alcohol when her mom died and her dad retreated into a bottle for comfort.

Tears filled her eyes as Thomas walked up to her, putting a tentative hand on her right shoulder. “Honey, I am so, so sorry.” Sara heard the anguish in his voice and she turned into his arms, sobbing.

“It will be alright now, honey. I really think so,” Thomas murmured as his beautiful daughter wept in his arms. Something about this place…this fresh start, gave him hope and the courage to carry on. He had loved Lynette with all his heart and soul, but he knew that he had a duty to love his daughter as well. His heart ached with grief at how selfish he had been. Was it any wonder that Sara ran astray after her mother was killed?

No, he acknowledged… it was a miracle that his daughter talked to him at all now, after he left her for the solace only liquid oblivion could provide.

“I’ll do better, honey. I promise,” he whispered.

Father and daughter held each other, weeping, as the female bird watched her hatchlings from a low branch and another creature observed the interesting spectacle from behind a large boulder.

Pollo was a wood-sprite. Like his sire and grandsire, his hair was as red as a poppy, his skin was as brown as a nut and his large, slanted eyes were as green as summer grass. He had been sitting and thinking about the great honor bestowed upon his family by the invitation from the fairy high court to attend the Spring Equinox Meeting and Market Fair. He was also trying to figure out a way to sneak along on the trip.