The Warring States (The Wave Trilogy) 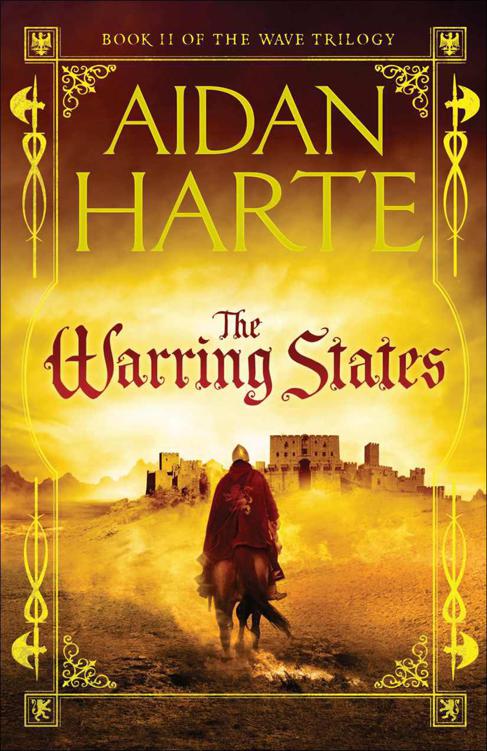 The moral right of Aidan Harte to be identified as the author of this work has been asserted in accordance with the Copyright, Designs and Patents Act, 1988.

You can find this and many other great books at:
www.quercusbooks.co.uk
and
www.jofletcherbooks.com

PART I:
STATE OF INNOCENCE

And she brought forth a man child, who was to rule all nations with a rod of iron.

Two years before the Siege of Rasenna, the Year of our Lady, 1367

‘You’re pretty slow for an engineer if you can’t see he’s lying.’

‘Signora,
you
can see there are others waiting. Step aside.’

‘Course you do. But even if your son wasn’t too young – how old are you?’

‘Even if he were old enough, the Guild only pays for children smart enough to be engineers, and if he were even half as clever as you say, the examiners would have spotted him years ago – and he’d have got further in the al-Buni test today. I’m sorry, but I need you to step aside.’

‘But I told you what a great
liar
he is. Torbidda, do it properly, or I swear—’

The examiner shared the boy’s sentiment. He had been sitting in a fine mist of drizzle all morning. His clothes and papers were sodden and his nose dripping, and the dark clouds circling the Molè presaged a squall. He’d seen it a hundred times: destitute parents trying to pawn off mouths they couldn’t feed, never mind that their children were every bit as dull as they were. The Apprentices ought to trust the examiners and stop the annual open testing; they were nothing more than an invitation for fraud. The boy was obviously no Bernoulli – he had a stubborn, ox-like brow and a grim, set jaw. The examiner didn’t
blame him for being angry – his mother
was
trying to sell him, after all.

‘Test him again!’ She struck the boy, an open-handed slap. He didn’t cry, but the examiner could see a scene developing. She turned back, smiling sweetly. ‘This time he’ll do it right.’

‘Problem here?’ A tall man stopped beside the inspection desk. He was in his late forties, but still fit and strong. He wore a streamlined toga that fell open across his barrel chest as if to advertise his strength. The youthful body was belied by white dartings in his neat beard and the faded ink of the Etruscan numerals beneath the stubble of his shaved head. His bitter mouth pulled down his sharp features.

The woman, recognising in the examiner’s voice that Flaccus had the authority to give her what she wanted, turned to him. ‘I insist that my son be tested again. He’s only
acting
dumb.’ On the sheet she held up there were a dozen grids, each with five squares filled in, the rest blank. The pattern had to be recognised, replicated and, in later stages, elaborated. ‘He makes things like this out of his head. Tell him, Torbidda.’

Flaccus snapped the test from the woman’s hand and studied it for a moment. ‘You obviously understood the sequence up to the second line, so why did you put a five here?’

The boy looked down at the grids in bewilderment. ‘Was that wrong?’

Flaccus abruptly dropped into a crouch and grabbed the boy’s chin. As the Grand Selector looked at him –
into him
– Torbidda noticed his missing finger. It was an old wound, the stump worn rough.

‘You’ll have to do better to fool me, boy. I deal with liars every day, the best Concord has. Take the test again, and do it right,
or your mother will end her days in the belly of the Beast. Don’t doubt my word.’

The woman began to cry and Torbidda shook his head as if deeply confused, as if there had been some terrible mistake. He looked at the man again, searching for sympathy. Finding none, he acknowledged defeat with a stoic sigh and leaned down on the examiner’s desk. He filled in the grid without pausing and handed it to Flaccus.

The Grand Selector scanned it and said quietly, ‘Give me the last sheet.’

Hiding his scepticism – no child ever got that far – the examiner fumbled for the form.

Torbidda scanned the first row and paused a moment. Then he said, ‘Don’t you know, Grand Selector?’

‘I am asking the question,’ he growled ominously.

‘Pay the woman,’ said Flaccus as he pulled Torbidda away. The boy turned to call to his mother, but her attention was rapt on the money the examiner was counting out, her grief and her son, the object sold, already forgotten.

Flaccus steered him uphill, his grip firm on Torbidda’s shoulder. For want of anything pleasant to consider, Torbidda pondered the Grand Selector’s absent finger. Amputation was a severe punishment, marking engineers with the stamp of civilian incompetence. The first lesson of Concord’s assembly line was that its blades were
always
thirsty; his generation needed only to examine their parents to see the savage surgery the engines could inflict.

They were soon in the highest part of Old Town, where the little wooden houses of civilians were replaced by tall stone buildings with taller stacks belching smoke and steam, all
surrounding the base of Monte Nero, the rock upon which Bernoulli had planted his great triple-domed cathedral.

Flaccus stopped and looked down at the boy. ‘What’s your game?’ he asked, sounding genuinely puzzled. ‘Most Old Towners would kill to join the Guild. There’s third-year Cadets who couldn’t get to page four of the al-Buni, but I believe you found it easy. You
really
don’t want to be an engineer?’

Flaccus chuckled heartily at this and relaxed. ‘Not even the Apprentices are free, boy. Only the dead. But let me make this clear: if you give less than your best from here on, then I’ll make sure you get what you wish for.’

He left Torbidda in a pen with a dozen other children – despite what Flaccus had said, none of them looked happier than Torbidda about being selected.

As Torbidda took his place in the queue, the tall boy in front turned around to examine him. ‘Hello,’ he said cheerily. ‘How did you do in your al-Buni? Bloody hard, wasn’t it?’ His simple, well-cut clothes spoke of wealth as eloquently as his New City accent. His dark complexion was not uncommon amongst the aristocracy; most likely one of his ancestors had been in Oltremare long enough to take a native wife – many Crusaders had returned with their bloodline spiced with some of that Ebionite warrior prowess.

A Lily on the Heath 4 by Colleen Gleason
Leather Maiden by Joe R. Lansdale
Crowbone by Robert Low
How to Save a Life by Amber Nation
Divas Do Tell by Virginia Brown
A Reason to Live (Marty Singer1) by Iden, Matthew
The Alphabet Wedding (Alpha #1.5) by Andie M. Long
Flower of Scotland 2 by William Meikle
The Love She Left Behind by Amanda Coe
Fatal Voyage by Kathy Reichs