Read The Way Back from Broken Online

The Way Back from Broken 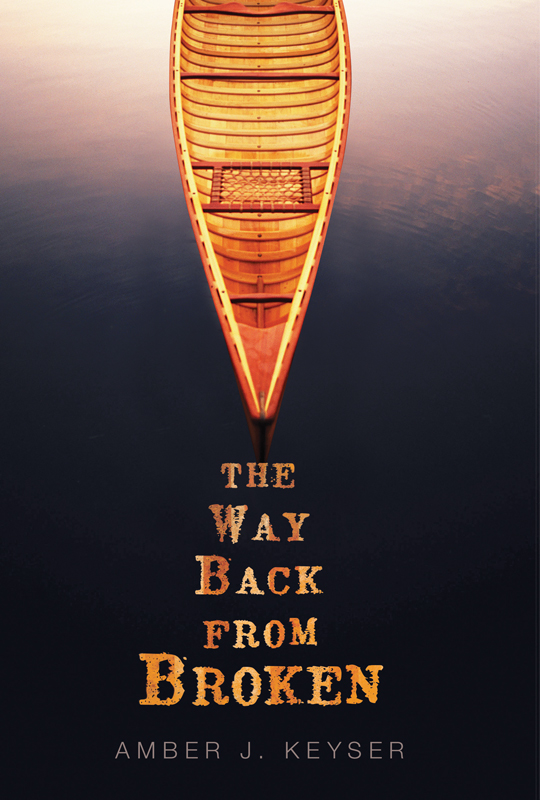 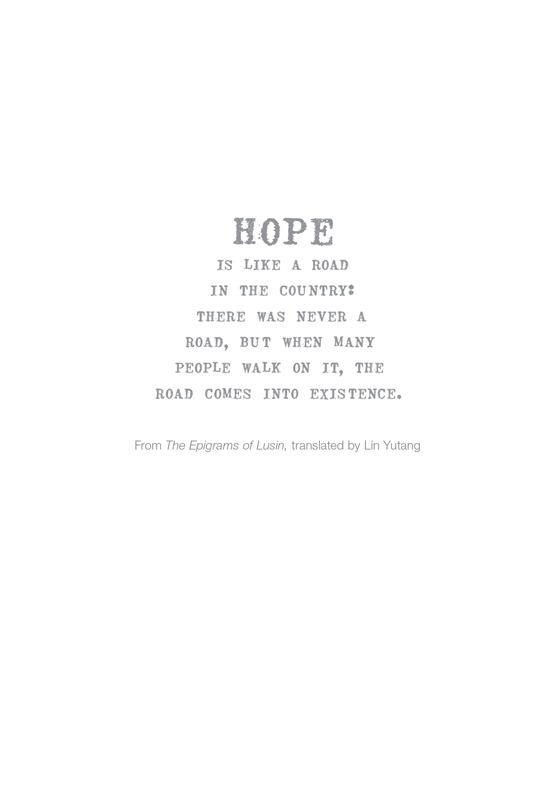 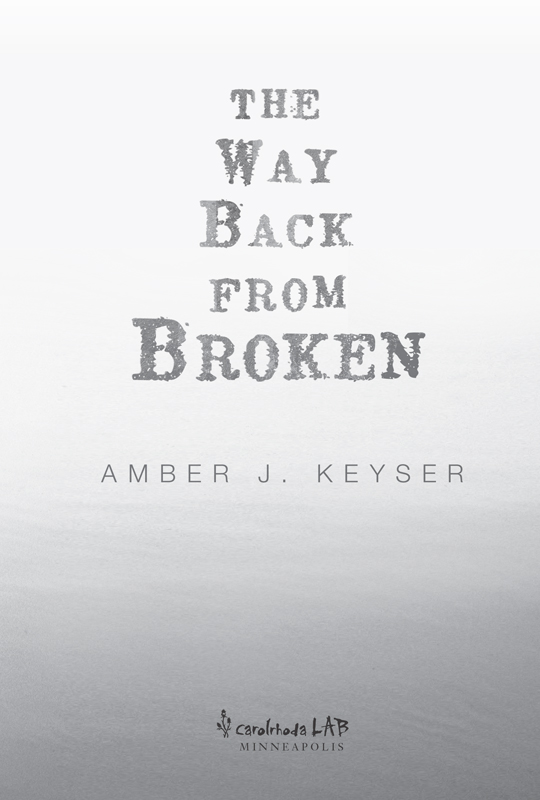 Carolrhoda Labâ ¢ is a trademark of Lerner Publishing Group, Inc.

The way back from broken / by Amber J. Keyser.

Summary: “After losing his infant sister, Rakmen's family is devastated. While his parents figure things out, they send Rakmen on a camping trip in the Canadian wilderness with another grieving family. Rakmen is far from thrilled about the trip, and he has to decide whether it's too late to find his way back from broken”
âProvided by publisher.

FOR SETH,
WHO CROSSED EVERY PORTAGE AND HELPED CARRY THE LOAD

On the way to Promise House, Rakmen sat in the backseat. His father drove, both hands gripping the wheel, while his mother brooded out the window. An ambulance screamed by on Lombard, sending up spray from puddles of spring rain. Rakmen winced and looked away, but the piercing red lights flooded the inside of the car.

Outside, night was coming fast.

Inside, the silence between his parents was louder than the siren.

When they stopped at the next light, a missing boy stared at him from a poster tacked to a telephone pole. Rakmen rolled down the window, squinting at the water-stained picture. The boy wore glasses and a crooked grin. Rakmen leaned out so he could read every word of the fading text.

He felt his mother turn toward him and rolled up the window before she could complain about the rain coming in. As his dad accelerated through the intersection, Rakmen fumbled in his pocket for a battered notebook. He scrawled the details about the disappeared kid.
Eight years old. Blond. Last seen wearing a red t-shirt and jeans. Over a year ago.
Not gonna be a happy ending to that story. He had to remember that.

They pulled to a stop in front of a large gray house with a wrap-around porch. A purple-flowered vine had the railing in a strangle-hold. It was too nice a house for such a crappy neighborhood. Even the bathrooms at the Safeway down the block were code-locked.

The engine went silent. No one moved.

Finally, his mother cleared her throat. “Michael, are you sure you won't come?”

In the back seat, Rakmen tensed.

“Mercedesâ” His dad's voice was gentle as he said her name, but it held ten months of the same disagreement.

“Alright, alright. I know,” she said, reaching for his hand on the steering wheel and lacing her fingers through his much darker ones. “I just think it would be good for you.”

If only Rakmen could get out so easily. Group scab-picking was not his idea of fun.

“I'm going to have a beer with Ray,” said his dad. “I'll pick you up at eight fifteen.”

He tugged at the collar of his church shirt but didn't move. “I don't need to come here any more.”

She cleared her throat again, refusing to look at him.

Ten months. Ten shitty, pointless months he'd been coming here with her. He was fifteen. Old enough to know what wasn't working.

Rakmen nudged his dad on the shoulder. “I could hang out with you guys.”

“Go with your mother,” he said, staring straight ahead.

Rakmen got out of the car, cursing under his breath. No one was ever on his side. Not that he blamed them. Even as he slammed the car door and let himself be swallowed by the dismal house, he knew there were some things that couldn't be forgiven.

Once inside the bolted front entry, his mother joined the parents' support group in the formal parlor where the therapist, whose name he never remembered, slid chairs into an expectant circle. The momsâand they were always moms, never dads because those guys chose beer over this train wreckâslumped into rockers and armchairs.

Rakmen's sneakers squeaked on the gleaming, lemon-scented wood floor as he headed toward the basement, where an art therapy intern waited with tubs of paint and markers and “feeling words.”

At the top of the stairs, the therapist stopped him with one hand on his arm. She was so tiny he could see the graying roots on the top of her head. She wore a ring on every finger, even her thumbs.

“Hey, Tall Boy,” she said, smiling like height was an accomplishment. “Do you mind getting some tissue boxes down?” She gestured to a closet in the hall. “They're on the top shelf.”

He nodded, pulled down six boxes of Kleenex and left her to put one in reach of every arm. Behind him the security buzzer at the door whined like an angry hornet.

“I'll get it,” Rakmen said. Anything to avoid the basement, where he'd spend the next hour half-choked by memories that wouldn't stay where they belonged.

Behind the rain-streaked windows, Molly and her mother stood shoulder to shoulder. Their pale faces and blond hair swam in the distorted glass, disembodied against the dark outside. Like most of the other white ladies who ventured into North Portland for group, Molly's mother, Kate, glanced nervously over one shoulder, clutching her handbag straps.

She used to look at him that way.

Rakmen knew what she saw. He was as tall as his dad but skinnier and not as dark. Both his hair and skin tended toward his Mexican mother. He hid, sullen and growly, under his too-long hair all the time. Once Kate had probably thought he looked dangerous, but inexplicably, she'd decided months ago that he was safe for Molly, and that was all that mattered. She side-hugged him, waved weakly at Molly, and went to join the other moms in the parlor full of Kleenexes.

“Hey,” said Molly, smiling up at him as she peeled off her rain coat. A damp strand of hair stuck to the starburst scar on her left temple, an everyday reminder of the crash that killed her sister.

But she was still pretty. Really pretty.

They met up here and only here, in this misfit jumble of rich and poor, religious and not, white and brown, where everyone came in pairs. Molly and her dead sister. Him and Dora. They were damaged goods who knew each other's secrets.

Well, most of them.

Last summer, he'd run into Molly and some of her friends at the Alberta Street Fair. That was awkward as all get-out. His buddies from school still wouldn't shut up about “Blondie.” They didn't get it. Promise House was not a place for girlfriends.

“I'll meet you downstairs,” said Molly, her arm skimming his as she went.

Rakmen opened the door and grunted hello to D'Vareay and D'Mareay. The twins were a year behind him at Roosevelt, fellow inmates of the north end of the city. The boys' mom, a woman built like a linebacker, lumbered to the parlor in silence.

It was a little after seven o'clock. Group was starting, but Rakmen lingered in the foyer, watching the drizzle. A homeless man trundled by, pushing a shopping cart crammed with bundles swathed in a torn tarp. A rusty brown pit bull mix plodded behind him, nose nearly scraping the sidewalk. Rakmen crunched his lanky frame into the window seat and turned to a new page in the notebook.
Sleeping on the streets. In the rain. Under a blue plastic tarp. With a starving dog.

Several more women showed up, each one exhausted and warped around the edges. Children clutched at their legs. Rakmen opened the door and watched as the women disentangled small arms and sent their offspring trotting downstairs. Hollowness pushed against his bones. The cover of the notebook tore as he crushed it between hands too big for the rest of him.

He wished he could un-see what he'd seen.

In the parlor, the meeting began in a tumbled murmur of voices. One of the moms started to cry almost immediately. Rakmen hummed a monotone under his breath. Sometimes it felt like all he did was listen to sobbing.

A few minutes later, the door buzzer startled the group in the parlor into temporary silence. Rakmen looked up to see two more faces through the wavy glass. New members, he figured, since the regulars were all here. Rakmen unfolded his body from the window seat, opened the door, and gaped as fragments of his life collided.

“Uh . . . Mrs. Tatlas?” Rakmen asked. He peered from her pinched face, distorted by grief, to the chubby little girl next to her.

In one heartbeat, Rakmen knew exactly why she was here. Before winter break, his biology teacher had been pushing her pregnant belly through the halls like a wheelbarrow. When a deflated version of herself had rejoined the class two months later, he'd figured she'd had the baby like normal.

Her muddy brown eyes searched the shiny foyer as if looking for some clue as to why she was standing there. The daughter peered at him through a fringe of dull brown bangs that skimmed her cheeks.

“Why are you here?” Mrs. Tatlas asked, fidgeting with the zipper on her purse.

“My mom comes.” Rakmen pointed to the parlor. “Group's in there. Kids go downstairs.”

The girl squeezed closer to her mother. Mrs. Tatlas seemed unsteady on her feet. Rakmen thought she might fall, but he couldn't bear to touch her. He stepped past them and pushed the front door closed, making sure it was locked.

Circling back, he addressed the girl. “Come on.”

He stared at her shoulder. A blotch of something stained the blue fabric of her sleeve. “It's okay,” he said. “They're just getting started. Go on in.”

The Guilty Innocent by Simmons, D N
ShameLess by Ballew, Mel
The Backup Boyfriend (The Boyfriend Chronicles) by Jaymes, River
The Delta Star by Joseph Wambaugh
Caught in a Bind by Gayle Roper
Mambo by Campbell Armstrong
Cold by John Sweeney
The Family Plan by Gina Wilkins
For The Death Of Me by Jardine, Quintin
Among the Wicked: A Kate Burkholder Novel by Linda Castillo