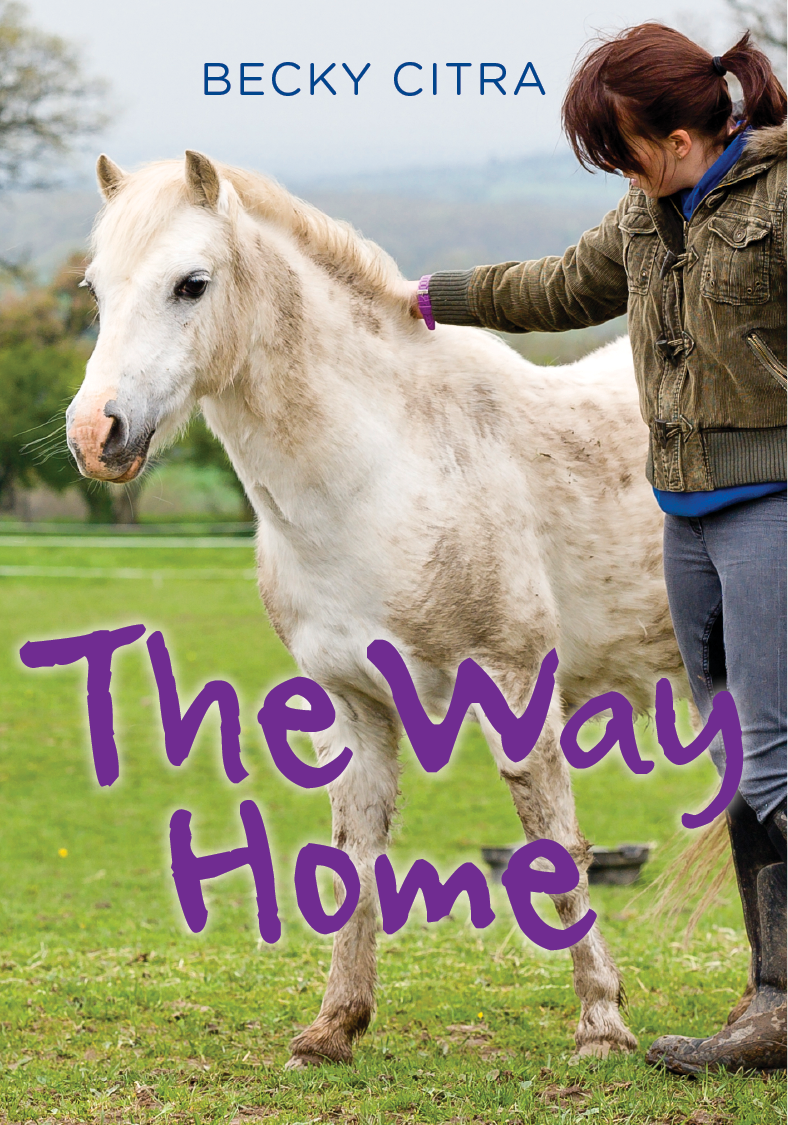 To Meghan and her horse, Dylan

Tory squeezed her legs against the pony's sides. Lucky flicked his ears, but he kept walking.
He refused to trot, especially on a scorching day like this.

“You're a lazy pony,” said Tory, but she didn't mean it. Lucky was the best thing in her life.

She gave him a gentle kick this time and he trotted for about six steps. Then he settled back to a walk.

It was so hot and so still that Tory thought she could hear the leaves curling up. The grass was withered and brown and the wildflowers had shriveled.

Everybody was worrying about forest fires. Tory's foster father, Oliver, had taken Lucky's iron shoes off in case they struck a rock and made sparks in the dry grass. He said going barefoot wouldn't hurt the pony.

Tory's foster mother was called Cathy. Tory lived with Oliver and Cathy as part of their family, but she could be moved somewhere else at any time. Her homes and her moves were arranged by Linda, the social worker who was responsible for her.

Tory knew that Oliver and Cathy didn't like her very much. She had heard Cathy say to Linda on the phone, “It's not working out very well. But I told you we would keep her for the summer, and we'll stick to that.”

This morning Tory had checked the calendar. She had a little more than three weeks of summer left, before she went to a new foster home. Her stomach churned at the thought. Where would she go? What if her new family didn't like her either? And that meant she had only three more weeks to ride Lucky. She reached forward and patted his thick, snowy mane.

Julia, Oliver and Cathy's daughter, said his mane looked dumb the way it stood up on end, but Tory loved it. Her own long brown hair was just as messy as Lucky's. Sometimes, like today, she tied it back in a ponytail, but usually she let it fly all over the place.

Julia was eleven, two years older than Tory, and her straight blonde hair was always neatly brushed. Julia rode one of the fancy show horses called Barnabas. She was always braiding his silky mane, fastening each braid with a little black elastic band. Tory thought
that
looked dumb but she knew better than to say so.

Oliver was a trainer. He had seven show horses in the barn right now. Some of them belonged to him and Cathy, and some belonged to other people. He worked with the horses every day, getting them ready to compete in horse shows. Tory liked watching him ride the horses in the ring, but she didn't like getting too near. The show horses were much taller than Lucky, and they jumped around a lot and scared her.

Now Tory rode Lucky out of the trees into a wide meadow. This was as far as she was allowed to go. The meadow was called the wetlands, but Tory could see only a little ribbon of sluggish water, far out in a sea of brown grass. Between the grass and the water was a strip of hard, dried-up mud.

Two weeks ago the ground had been alive with hundreds of tiny black frogs, the size of Tory's thumbnail. There were so many that the ground looked as if it were moving, and Tory had been terrified that Lucky would step on them. Cathy said the frogs came every year, and she wasn't sure but she thought they crawled up out of the creek and through the grass.

But today they were gone. Had they dried up in all this heat?

Tory turned Lucky around. He nickered and walked a bit faster.

When they came around the last bend in the trail, Tory cried out loud, “Holy cow!”

In the distance, a huge billow of white cloud sat on top of the hillside. It was smoke from a forest fire and it had been there for a week. But it had grown so much bigger while she was out riding. Staring at the enormous cloud she shivered, and patted Lucky's neck as she rode past the corrals toward the barn.

Oliver said the smoke was farther away than it appeared. Miles and miles away, he said. But every day he and Cathy pored over a giant map spread out on the dining-room table. The radio was on all the time, day and night, with news about the fire.

How fast was it moving? Was it coming toward them? Not even Oliver knew for sure.

Tory took in a deep breath of sweet hay and leather. She loved the way the barn smelled. She took Lucky's saddle and bridle off, brushed his shaggy white coat, and put him in his stall.

Tory had learned how to ride and look after a horse in her first foster home. She had moved into that home when she was four years old because her mother, who was still just a teenager, wasn't able to look after her properly.

For a while Tory's mother had visited her, but then the visits had stopped and Linda, the social worker, told Tory that her mother had died. Tory had thought she would keep on living with that foster family forever. But when she was eight years old, her foster father got an important new job in Europe, and Tory wasn't allowed to go with them.

She moved again, into her second foster home.

That home didn't work out at all. Tory and the foster mother, Janice, fought all the time. Janice was always blaming Tory for things she hadn't done. When Tory defended herself, Janice said she was lying. After a year, Janice decided that she didn't want to be a foster mother anymore. Right in front of Tory, she told Linda that she couldn't put up with Tory's temper. Blaming Tory again!

Linda told Tory she was sorry about her bad luck. She promised she would find her another family that wanted her. Until then, just for the summer, Tory had to live with Oliver and Cathy.

It made Tory's throat ache to think about all this, so she thought about Lucky instead.

On hot days Oliver and Cathy kept the horses inside the barn, away from the flies. While Tory was brushing Lucky, three heads popped over their stall doors to watch: Julia's bay horse, Barnabas; a gray horse called Destiny; and a chestnut called Orpheus.

The other four stalls were empty. That morning, Oliver had loaded the four horses that belonged in them into the horse trailer. He had taken them to a family called the Mathesons who had a farm far away from the fire. He said he was preparing for a possible evacuation.

Lately Tory had heard the word
evacuation
a lot. People on the radio were talking about it all the time. It meant that if the forest fire came much closer, they would have to grab as many belongings as they could and run to safety.

Tory wasn't too worried. She could pack her few things in her brown duffel bag and backpack in five minutes. She'd done it before. But she couldn't imagine what Julia would do. Julia's purple and white bedroom was crammed with more toys, stuffed animals, books, and clothes than Tory had ever seen in her entire life.

She said good-bye to Lucky and walked to the house. It was the grandest house she had ever lived in. It was built of logs, and the front came up to a high pointed roof and was full of huge windows.

The first day Tory had come here, she had expected to see dogs and cats (didn't all farms have dogs and cats?), but there were none here. When she asked about that, Oliver had frowned and said, “Seven horses are enough to feed and look after.” But the truth was that Oliver didn't like dogs. He said they either roamed onto neighbors' farms or barked all night. And Cathy didn't like cats. She didn't like the way they stared.

Tory had known that when Oliver said “seven horses” he was talking about the valuable show horses, but she had muttered, “You mean
eight
.” Oliver always forgot about Lucky.

A red truck was parked in front of the house today. It belonged to Mrs. Beeson, Julia's riding teacher. Tory went straight to the kitchen to get a glass of milk. The kitchen was spotless, gleaming with stainless steel, and she was always afraid she would spill something. She took the heavy milk carton out of the fridge, poured her milk carefully, and sat at the table to drink it. The radio on the shelf was turned on and a man was listing all the places that had been put on Evacuation Alert. Oliver had explained that Evacuation Alert meant you had to be ready to go at any time. Their place wasn't on the list â yet.

Tory wished she had taken her milk to her bedroom, but she didn't think that was allowed. She hated being alone with Julia. She tried to think of something to say. “How was your riding lesson?”

“What?” Julia took a bag of chips out of the cupboard and a can of orange pop from the fridge, two things Tory didn't have the nerve to touch. “Awful. Old Beeswax was in a horrible mood and Barnabas was useless. He wouldn't canter on his left lead at all.” When her lesson went badly, Julia always blamed either Mrs. Beeson â who she called Old Beeswax â or Barnabas. Sometimes, like today, she blamed both.

Tory didn't have any idea what a left lead was but she said, “That's too bad.”

Julia glared at her and stalked out into the hallway. She came back a second later. “Old Beeswax and Mom are talking about you. In the living room. Do you want to hear what they're saying?”

Tory followed Julia into the hallway. They pressed up against the partly open door that led to the living room.

“And a temper to match,” said Cathy. “She's a poor reader, you know. I tried to help her and she threw the book right across the room.”

Mrs. Beeson sighed. “What a shame.”

Tory knew what she meant. Mrs. Beeson wasn't sorry that Tory found reading hard. She was sorry that Cathy and Oliver had ever decided to take her.

“We thought she'd be like a sister for Julia,” said Cathy. “It was an impulsive idea. Thank goodness it's just for the summer. We're looking forward to having our little family back.”

“I don't want a sister,” said Julia in Tory's ear.

“I don't want one either,” retorted Tory, and she felt her cheeks flame. She
hated
Julia! And except for Lucky, she hated living here! She didn't want to hear any more. She held her head high and marched down the hallway and up the stairs to her little bedroom. She didn't mean to slam the door, it just sort of slammed itself. It sounded awfully loud in the quiet house. Tory was pretty sure Cathy and Mrs. Beeson had heard it.

Oh well, it just gave them one more bad thing to say about her.