The well of lost plots 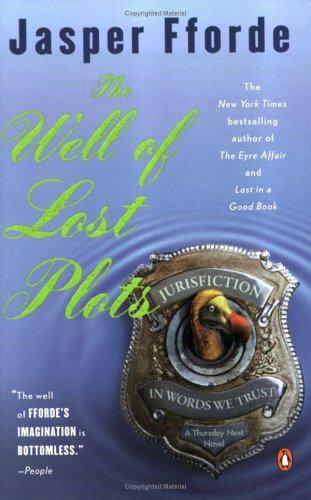 Synopsis:
Leaving Swindon behind to hide out in the Well of Lost Plots — the place where all fiction is created — Thursday Next ponders her next move. As a shadow looms over popular fiction, she must keep her wits about her and discover what is going on and who can she trust.
As is usual in Jasper Fforde’s novels, there is no chapter thirteen. No one knows the significance for this. 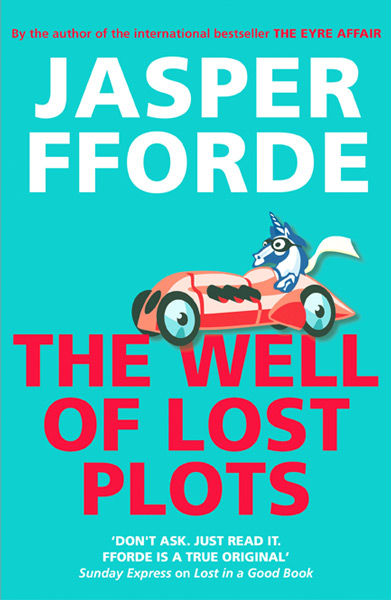 The Well of Lost Plots
By
Jasper Fforde

The third book in the Thursday Next series

For Mari
who makes the torches burn brighter

Swindon, Wessex, England, circa 1985. SpecOps is the agency responsible for policing areas considered too specialized to be tackled by the regular force, and Thursday Next is attached to the Literary Detectives at SpecOps-27. Following the successful return of Jane Eyre to the novel of the same name, vanquishing master criminal Acheron Hades and bringing peace to the Crimean peninsula, she finds herself a minor celebrity.

On the trail of the seemingly miraculous discovery of the lost Shakespeare play
Cardenio
, she crosses swords with Yorrick Kaine, escapee from fiction and neofascist politician. She also finds herself blackmailed by the vast multinational known as the Goliath Corporation, who want their operative Jack Schitt out of Edgar Allan Poe’s “The Raven,” in which he was imprisoned. To achieve this they call on Lavoisier, a corrupt member of the time-traveling SpecOps elite, the ChronoGuard, to kill off Thursday’s husband. Traveling back thirty-eight years, Lavoisier engineers a fatal accident for the twoyear-old Landen, but leaves Thursday’s memories of him intact — she finds herself the only person who knows he once lived.

In an attempt to rescue her eradicated husband, she finds a way to enter fiction itself — and discovers that not only is there a policing agency within the BookWorld known as Jurisfiction, but that she has been apprenticed as a trainee agent to Miss Havisham of
Great Expectations
. With her skills at bookjumping growing under Miss Havisham’s stern and often unorthodox tuition, Thursday rescues Jack Schitt, only to discover she has been duped. Goliath has no intention of reactualizing her husband and instead wants her to open a door into fiction, something Goliath has decided is a “rich untapped marketplace” for their varied but spectacularly worthless products and services.

Thursday, pregnant with Landen’s child and pursued by Goliath and Acheron’s little sister, Aornis, an evil genius with a penchant for clothes shopping and memory modification, decides to enter the BookWorld and retire temporarily to the place where all fiction is created: the Well of Lost Plots. Taking refuge in an unpublished book of dubious quality as part of the Character Exchange Program, she
thinks
she will have a quiet time.

To those unfamiliar with the pronunciation of English provincial towns, this is how I pronounce them:

Slough
rhymes with
wow
and is
never
pronounced
Sluff
.

Reading
is pronounced as in Otis
Redding
.

Hobble
is a pronounced
limp
.

Mouse your way to my Web site at www.jasperfforde.com

This book has been bundled with special features including “The Making of” documentary, deleted scenes from all three books, outtakes and much more. To access all these free bonus features, log on to www.jasperfforde.com/specialfeatures.html and enter the code word as directed.

1.
The Absence of Breakfast

The Well of Lost Plots.
To understand the Well you have to have an idea of the layout of the Great Library. The library is where all published fiction is stored so it can be read by the readers in the Outland; there are twenty-six floors, one for each letter of the alphabet. The library is constructed in the layout of a cross with the four corridors radiating from the center point. On all the walls, end after end, shelf after shelf, are
books
. Hundreds, thousands, millions of books. Hardbacks, paperbacks, leatherbound, everything. But the similarity of all these books to the copies we read back home is no more than the similarity a photograph has to its subject; these books are
alive
.

Beneath the Great Library are twenty-six floors of dingy yet industrious subbasements known as the Well of Lost Plots. This is where books are constructed, honed and polished in readiness for a place in the library above — if they make it that far. The failure rate is high. Unpublished books outnumber published by an estimated eight to one.

THURSDAY NEXT,
The Jurisfiction Chronicles

MAKING ONE’S HOME in an unpublished novel wasn’t without its compensations. All the boring day-to-day mundanities that we conduct in the real world get in the way of narrative flow and are thus generally avoided. The car didn’t need refueling, there were never any wrong numbers, there was always enough hot water, and vacuum cleaner bags came in only two sizes — upright and pull along. There were other more subtle differences, too. For instance, no one ever needed to repeat themselves in case you didn’t hear, no one shared the same name, talked at the same time or had a word annoyingly “on the tip of their tongue.” Best of all, the bad guy was always someone you knew of, and — Chaucer aside — there wasn’t much farting. But there were some downsides. The relative absence of breakfast was the first and most notable difference to my daily timetable. Inside books, dinners are often written about and therefore feature frequently, as do lunches and afternoon tea; probably because they offer more opportunities to further the story.

Breakfast wasn’t all that was missing. There was a peculiar lack of cinemas, wallpaper, toilets, colors, books, animals, underwear, smells, haircuts, and strangely enough, minor illnesses. If someone was ill in a book, it was either terminal and dramatically unpleasant or a mild head cold — there wasn’t much in between.

I was able to take up residence inside fiction by virtue of a scheme entitled the Character Exchange Program. Due to a spate of bored and disgruntled bookpeople escaping from their novels and becoming what we called PageRunners, the authorities set up the scheme to allow characters a change of scenery. In any year there are close to ten thousand exchanges, few of which result in any major plot or dialogue infringements — the reader rarely suspects anything at all. Since I was from the real world and not actually a character at all, the Bellman and Miss Havisham had agreed to let me live inside the BookWorld in exchange for helping out at Jurisfiction — at least as long as my pregnancy would allow.

The choice of book for my self-enforced exile had not been arbitrary; when Miss Havisham asked me in which novel I would care to reside, I had thought long and hard.
Robinson Crusoe
would have been ideal considering the climate, but there was no one female to exchange with. I could have gone to
Pride and Prejudice
, but I wasn’t wild about high collars, bonnets, corsets — and delicate manners. No, to avoid any complications and reduce the possibility of having to move, I had decided to make my home in a book of such dubious and uneven quality that publication and my subsequent enforced ejection was unlikely in the extreme. I found just such a book deep within the Well of Lost Plots amongst failed attempts at prose and half-finished epics of such dazzling ineptness that they would never see the light of day. The book was a dreary crime thriller set in Reading entitled
Caversham Heights
. I had planned to stay there for only a year, but it didn’t work out that way. Plans with me are like De Floss novels — try as you might, you never know
quite
how they are going to turn out.

I read my way into
Caversham Heights
. The air felt warm after the wintry conditions back home, and I found myself standing on a wooden jetty at the edge of a lake. In front of me there was a large and seemingly derelict flying boat of the sort that still plied the coastal routes back home. I had flown on one myself not six months before on the trail of someone claiming to have found some unpublished Burns poetry. But that was another lifetime ago, when I was SpecOps in Swindon, the world I had temporarily left behind.

The ancient flying boat rocked gently in the breeze, tautening the mooring ropes and creaking gently, the water gently slapping against the hull. As I watched the old aircraft, wondering just how long something this decrepit could stay afloat, a well-dressed young woman stepped out of an oval-shaped door in the high-sided hull. She was carrying a suitcase. I had read the novel of
Caversham Heights
so I knew Mary well although she didn’t know me.

“Hullo!” she shouted, trotting up and offering me a hand. “I’m Mary. You must be Thursday. My goodness! What’s that?”

“A dodo. Her name’s Pickwick.”

“Really?” she replied, looking at the bird curiously. “I’m no expert of course but — I
thought
dodoes were extinct.”

She touched me inquisitively with a slender index finger as though I might be made of glass.

“I’ve never seen someone from the other side before,” she announced, clearly relieved to find that I wasn’t going to shatter into a thousand pieces. “Tell me, is it true you have to cut your hair on a regular basis? I mean, your hair actually
grows
?”

“Really?” mused Mary. “I’ve heard rumors about that but I thought it was just one of those Outlandish legends. I suppose you have to eat, too? To stay alive, I mean, not just when the story calls for it?”

“One of the great pleasures of life,” I assured her.

I didn’t think I’d tell her about real-world downsides such as tooth decay, incontinence, or old age. Mary lived in a three-year window and neither aged, died, married, had children, got sick or changed in any way. Although appearing resolute and strong-minded, she was only like this because she was
written
that way. For all her qualities, Mary was simply a foil to Jack Spratt, the detective in
Caversham Heights
, the loyal sergeant figure to whom Jack explained things so the readers knew what was going on. She was what writers called an
expositional
, but I’d never be as impolite to say so to her face.

“Is this where I’m going to live?” I was pointing at the shabby flying boat.

“I know what you’re thinking.” Mary smiled proudly. “Isn’t she just the most beautiful thing ever? She’s a Sunderland; built in 1943 but last flew in ’68. I’m midway converting her to a houseboat, but don’t feel shy if you want to help out. Just keep the bilges pumped out, and if you can run the number three engine once a month, I’d be very grateful — the start-up checklist is on the flight deck.”

“Good. I’ve left a précis of the story taped to the fridge and a rough idea of what you have to say, but don’t worry about being word perfect; since we’re not published, you can say almost anything you want — within reason, of course.”

“Of course.” I thought for a moment. “I’m new to the Character Exchange Program. When will I be called to do something?”

Shades of Midnight by Linda Winstead Jones
I Promise by Adrianne Byrd
The Lady in Pink - Deadly Ever After 2 by J. A. Kazimer
Angels on Sunset Boulevard by Melissa de la Cruz
No abras los ojos by John Verdon
The Impossible Art of Falling (Impossible Art #1) by Sara Fiorenzo
The Same Deep Water by Swallow, Lisa
Capricorn Cursed by Sephera Giron
Himmler's War-ARC by Robert Conroy
Nearest Thing to Crazy by Elizabeth Forbes