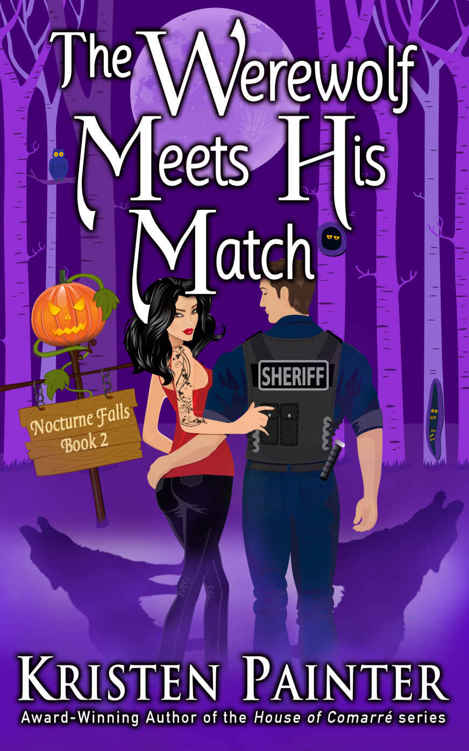 Welcome to Nocturne Falls, the town where Halloween is celebrated 365 days a year. The tourists think it’s all a show: the vampires, the werewolves, the witches, the occasional gargoyle flying through the sky. But the supernaturals populating the town know better.

Living in Nocturne Falls means being yourself. Fangs, fur, and all.

Getting arrested wasn’t on werewolf Ivy Kincaid’s agenda when she arrived in Nocturne Falls, but her life rarely goes according to plan. The upside of spending the night in the local lock-up is finding a hotel room is no longer a worry…but the downside is the man she’s come to marry will get his first impression of her behind bars. Not exactly the way Ivy was hoping to meet her pack’s sworn enemy…aka her fiancé.

Sheriff (and werewolf) Hank Merrow is the alpha’s heir. Everything he’s ever done, from becoming an Army Ranger to serving in law enforcement, has been in preparation for the day he’ll take over. Getting married to cement a shaky truce is no different. Hank will do his duty, even if it means shackling himself to a woman he has no intention of liking, let alone loving.

But Ivy is nothing like Hank expected. As feisty as she is beautiful, she’s as determined as he is to make a go of marriage for the sake of peace between their packs. The trouble is, Ivy has secrets that could destroy everything Hank holds dear…including his newfound love for her.

THE WEREWOLF MEETS HIS MATCH:

All rights reserved. No part of this book may be reproduced in any form or by any electronic or mechanical means, including information storage and retrieval systems—except in the case of brief quotations embodied in critical articles or reviews—without permission in writing from the author.

This book is a work of fiction. The characters, events, and places portrayed in this book are products of the author’s imagination and are either fictitious or are used fictitiously. Any similarity to real person, living or dead, is purely coincidental and not intended by the author.

Want to know when Kristen’s next book is coming out? Join her mailing list for release news, fun giveaways, insider scoop and more!

Dedicated to my amazing readers:

Thanks for digging what I do!

Ivy Kincaid parked her inherited Harley Softail alongside a few other motorcycles in the back lot of a place called Howler’s. The bike’s metallic black paint looked great next to the other bikes. Sharp and on point. Small victories, right?

She swung off the bike and stood next to it. The other motorcycles seemed a good sign that this place had cheap beer and decent food, which sounded exactly like the kind of place she needed right now. Partially because of the long ride from Tennessee to Nocturne Falls. Mostly because of the reason she’d taken that ride. It was a doozy. The sort of reason that made a woman want a nice cold beer. Or three.

She’d come to this crazy tourist town to get married.

To a man she’d never met.

She knew his name. That was it. Not where he lived, not where he worked, not what he looked like.

She had two driving reasons for agreeing to such a crazy scheme. One of them was her father. No one said no to Clemens Kincaid. Not more than once anyway. The other…she glanced at the number five tattooed on the inside of her left wrist. The other reason was her heart and soul and the slim chance that this new life might also mean a new future.

She pulled off her helmet, stuck it on the back of her bike, then pulled the elastic off her braid and ran her hands through her hair, giving her scalp a little massage in the process. She kept her hair in a braid to minimize wind damage. Too bad minimizing the hits to the rest of her life wasn’t that easy.

If it was, she wouldn’t be here.

As it stood, this might be her last night without a man telling her what to do. Scratch that. Without a
husband
telling her what to do. Her father had been ordering her around her entire life, but she’d learned how to survive that. Mostly. The man who was about to be her husband was an unknown quantity. He could be worse than her father. She wasn’t sure how, but the possibility existed.

She was supposed to text her father with proof of her arrival, but that could wait. Right now, she needed a break from everything that was about to happen to her. A little time to sit and unwind and not think.

But that was easier said than done.

With a resigned sigh and the weight of her future resting squarely on her strong shoulders, she headed inside Howler’s. The large back room held pool tables, some dart boards and other bar games. Booths lined the walls, and a few pub tables filled the vacant spots. She kept going, into the next room, and found her intended target, the bar. The place was busy but not crazy swamped. She grabbed a seat and ordered a beer and a grilled cheese, the cheapest thing on the list of sandwiches.

A quick assessment of the female bartender confirmed that this
was
Ivy’s kind of place. The woman was definitely a shifter. Probably wolf, just like Ivy. Hard to get a clean scent with this many bodies in a place.

The bartender returned and dropped Ivy’s beer off with a cold, frosted glass. “Your food will be right up. You want to run a tab?”

Ivy dropped a twenty on the bar. “I’ll pay as I go.” She didn’t have a credit card to run a tab with anyway.

“Okay. Name’s Bridget when you’re ready for round two.” She left to get Ivy’s change.

Ivy ignored the glass and took a long, slow pull off the bottle, enjoying the icy cold liquid as it hit the back of her throat.

She sighed in pleasure. There wasn’t much a cold beer or a good shag couldn’t temporarily fix. Not that she’d had the latter in a long time. She took another sip of beer. Even with her sucky situation, she was feeling better. Not that she was one to feel sorry for herself. That was a fool’s road, and her path was bumpy enough already.

The vibrations of the ride had left her a little antsy, making it hard to keep her butt on the stool. She scraped at the bottle’s label with one zebra-striped nail.

She turned to see who was chatting her up.

Tourist. Probably. But then, technically so was she. She inhaled. Human definitely. She surveyed the man in all his casual, I’m on vacay glory. Cargo shorts, Key West T-shirt, sandals, bottle of Corona. She smiled. A Parrot Head was hitting on her? Wildly ballsy. She lifted her bottle. “I have one, thanks.”

With a pleasant smile, she went back to watching the crowd. She got it, she really did. The Parrot Head probably imagined her as the bad girl, the forbidden fruit. He saw her leathers, the blue-black hair, the smoky makeup, and painted nails and made his assumption based on those externals. Not to mention the added pull of her werewolf pheromones. Shifter or human, they attracted all men.

Maybe he’d even seen the five on the inside of her wrist or the tattooed curl of her namesake plant peeking out over the collar of her vest. That particular spot of ink wound from her shoulder to just above her elbow. Delicate, feminine but undeniably a major piece of work.

“I could get the second round.”

She turned back around and gave him points for not being a quitter. “I appreciate it, I really do, but despite your preconceived notions about me based on the way I look, I’m not the good time you’re probably after.”

He frowned. “You think a lot of yourself, don’t you?”

Bridget the bartender dropped off a paper-lined red plastic basket with Ivy’s sandwich and a mound of fries. She shot Ivy a look as if to ask if she needed to intervene.

Ivy gave a little shake of her head, then picked up her bottle and the food basket and stood. She was an inch taller than the Parrot Head thanks to her height and her lug-soled boots, but she wasn’t looking to intimidate him, just be left alone. This conversation wasn’t worth her time or energy, not when she had very little of the first and needed to conserve the second for whatever lay ahead. “Have a good night.”

She left him with a scowl on his face and walked back to the pool room, the need to exert some energy rippling over her skin. She found a spot at the bar rail along the wall and settled in to eat her grilled cheese. It was good. Better than she’d expected for something so simple. She watched the tables. Playing a few rounds of pool might help shed some of her excess energy.

Taking to the woods for a run, her first choice, wasn’t an option. Going full wolf in unfamiliar woods wasn’t the most advisable decision, even if it was the one thing that would give her the most relief.

The full moon was four nights away. Close enough that the wildness inherent in her kind was already itching to be free, and if
she
was feeling it, so were the other shifters in the area. That meant there was too much of a chance she might cross into another shifter’s territory and maybe have to brawl her way out.

Wouldn’t do to meet her fiancé wearing the scrapes and bruises of a turf scuffle. Of course, she wouldn’t know him unless she texted her father and got the rest of her intended’s info. She prayed that he was kind and decent. Those things mattered far more than what he looked like, although it wouldn’t hurt if he was all right looking.

She glanced over her shoulder. Parrot Head had made a smart decision and hadn’t followed her into the game room.

From her spot near the back wall, she got the lay of the land while she ate. All three pool tables were in use and all had players waiting. She picked the shortest line and set a stack of quarters on the rail as a signal of her intention to play, then went back to eating and people watching. A few feet away, a couple stood face to face, the woman’s voice quiet but strained, the man’s louder. Possibly bolstered by alcohol.

Ivy watched them out of curiosity and a small sense of familiar dread. Her shifter hearing picked up their conversation easily.

He wore a sweat-stained Red Man chewing tobacco hat and a flannel shirt with the sleeves rolled up. He stared down at the woman, who cowered beside him like a whipped dog. “What did you say to that guy?”

The woman looked up, the corners of her mouth pulled taut. She shoved her hands into the pockets of her jean jacket and tugged it tight over her flowered sundress. “I didn’t say anything to him.”

“Well, he certainly thought he had a reason to talk to you. Did you smile at him? Make him think he had a chance?”

Ivy frowned, her dread realized. She knew guys like this. Controlling. Jealous. Always thinking the world was out to take away whatever crumbs they had. With a shake of her head, she went back to watching the tables and the players to see when her turn would come up.