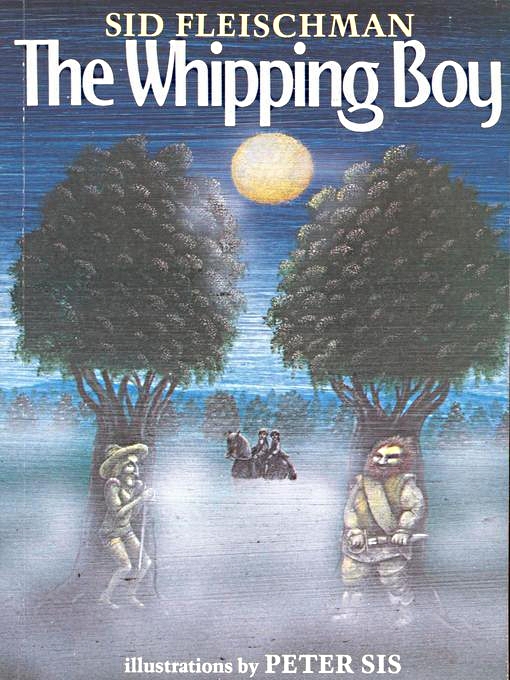 As a part of the HBJ TREASURY OF LITERATURE, 1993
Edition, this edition is published by special arrangement
with Greenwillow Books, a division of William Morrow &
Company, Inc

CHAPTER 1
In which we observe a hair-raising event

The young prince was known here and there (and just about everywhere else) as Prince Brat. Not even black cats would cross his path.

One night the king was holding a grand feast. Sneaking around behind the lords and ladies, Prince Brat tied their powdered wigs to the backs of their oak chairs.

Then he hid behind a footman to wait.

When the guests stood up to toast the king, their wigs came flying off.

The lords clasped their bare heads as if they'd been scalped. The ladies shrieked.

Prince Brat (he was never called that to his face, of course) tried to keep from laughing. He clapped both hands over his mouth. But out it ripped, a cackle of
hah-hahs
and
haw-haws
and
hee-hee-hees.

The king spied him and he looked mad enough to spit ink. He gave a furious shout.

Prince Brat knew that he had nothing to fear. He had never been spanked in his life. He was a prince! And it was forbidden to spank, thrash, cuff, smack, or whip a prince.

A common boy was kept in the castle to be punished in his place.

The king's command traveled like an echo from guard to guard up the stone stairway to a small chamber in the drafty north tower.

An orphan boy named Jemmy, the son of a rat-catcher, roused from his sleep. He'd been dreaming happily of his ragged but carefree life before he'd been plucked from the streets and sewers of the city to serve as royal whipping boy.

A guard shook him fully awake. "On your feet, me boy."

In the main hall, the king said, "Twenty whacks!"

Defiantly biting back every yelp and cry, the whipping boy received the twenty whacks. Then

the king turned to the prince. "And let that be a lesson to you!"

"Yes, Papa." The prince lowered his head so as to appear humbled and contrite. But all the while he was feeling a growing exasperation with his whipping boy.

In the tower chamber, the prince fixed him with a scowl. "You're the worst whipping boy I ever had! How come you never bawl?"

"Dunno," said Jemmy with a shrug.

"A whipping boy is supposed to yowl like a stuck pig! We dress you up fancy and feed you royal, don't we? It's no fun if you don't bawl!"

Jemmy shrugged again. He was determined never to spring a tear for the prince to gloat over.

"Yelp and bellow next time. Hear? Or I'll tell Papa to give you back your rags and kick you back into the streets."

Jemmy's spirits soared. Much obliged, Your Royal Awfulness! he thought. I'll take me rags, and I'll be gone in the half-blink of an eye.

Jemmy could count on a thrashing first thing in the morning. Sure and certain, he thought, as he pulled on his fine velvet breeches and silk stockings. The prince wouldn't know his lessons, the royal tutor was quick as a flyswatter with his willow switch—and Jemmy would be back in rags.

"Take a last look at me, Pa, rest your bones," he muttered to himself. "Did you ever think I'd be holed up in the king's own castle and all rigged up in duds would shame a peacock? Reckon I'll fetch a pair of sharp-toothed ferrets and go to rat-catchin', same as you. Same as you, Pa."

The tutor, Master Peckwit, was a round-faced man with fat cheeks. He pointed his switch at the prince.

"You fiddle-faddled scholar!" he bellowed. "One day you'll be king! And you still don't know the alphabet from pig tracks!"

The prince snapped his fingers. "I can always get someone to read for me."

"You can't so much as write your name!"

"Pish-posh. I can always get someone to write my name for me."

The tutor's cheeks, swelling with anger, almost unhorsed the small spectacles saddling his nose. "It would be easier to educate a boiled cabbage! Prepare to be punished, Your Lordship!"

"Ten whacks at least," said the prince. "And good and hard, if you please."

Jemmy, who was obliged to be close at hand for the daily lessons, reckoned that freedom was now close at hand. The prince threw him a smirking glance as Master Peckwit raised the switch and beat the whipping boy like a carpet.

Jemmy didn't bawl. He didn't yelp or bellow. Ten whacks, and not a sound escaped his lips.

"You contrary rascal!" the prince exploded. "I'm on to you, Jemmy-From-The-Streets. It's pure spite that you won't howl! Think you can cross me and get away with it? Ha! Never and nohow!"

Gaw! thought Jemmy. He's going back on his word!

"And don't try to run away. I'll have you tracked down till your tongue hangs out like a red flag!"

And so it went for more than a year. The prince learned nothing. The whipping boy learned to read, write, and do sums.

On a night when the moon gazed down like an evil eye, the young prince appeared in Jemmy's chamber.

"Boy! Tumble out of bed. I need a manservant."

Jemmy saw that the prince was wearing a black cloak and carrying a wicker basket the size of a sea chest. "What you up to now? Walkin' in your royal sleep, are you?"

The whipping boy sat bolt upright. Hardly a day passed that he didn't make one plan or another to run off—but a prince? What horrible new mischief was this? "You can't hop off like you was common folks. What's bitin' you?"

"With dumping bullfrogs in the moat so no one got a wink o' sleep?"

"And didn't you laugh fit to kill when the knights slipped off their horses and clattered to the ground? You'd hog-greased the saddles."

The prince folded his arms. "Boring."

"And don't you get me thrashed so that this hide o' mine feels like the devil run me over with spikes in his shoes?"

Why me? Jemmy thought. Can't you find a friend to run off with? But no—not you, Prince Brat. You've got no friends. That's why me.

Jemmy pointed to the window. "It's night out," he protested.

"The best time," replied the prince.

"But ain't you afraid o' the dark? Everyone knows that! You won't even sleep without a lit candle."