Read The White Horse King: The Life of Alfred the Great Online

The White Horse King: The Life of Alfred the Great 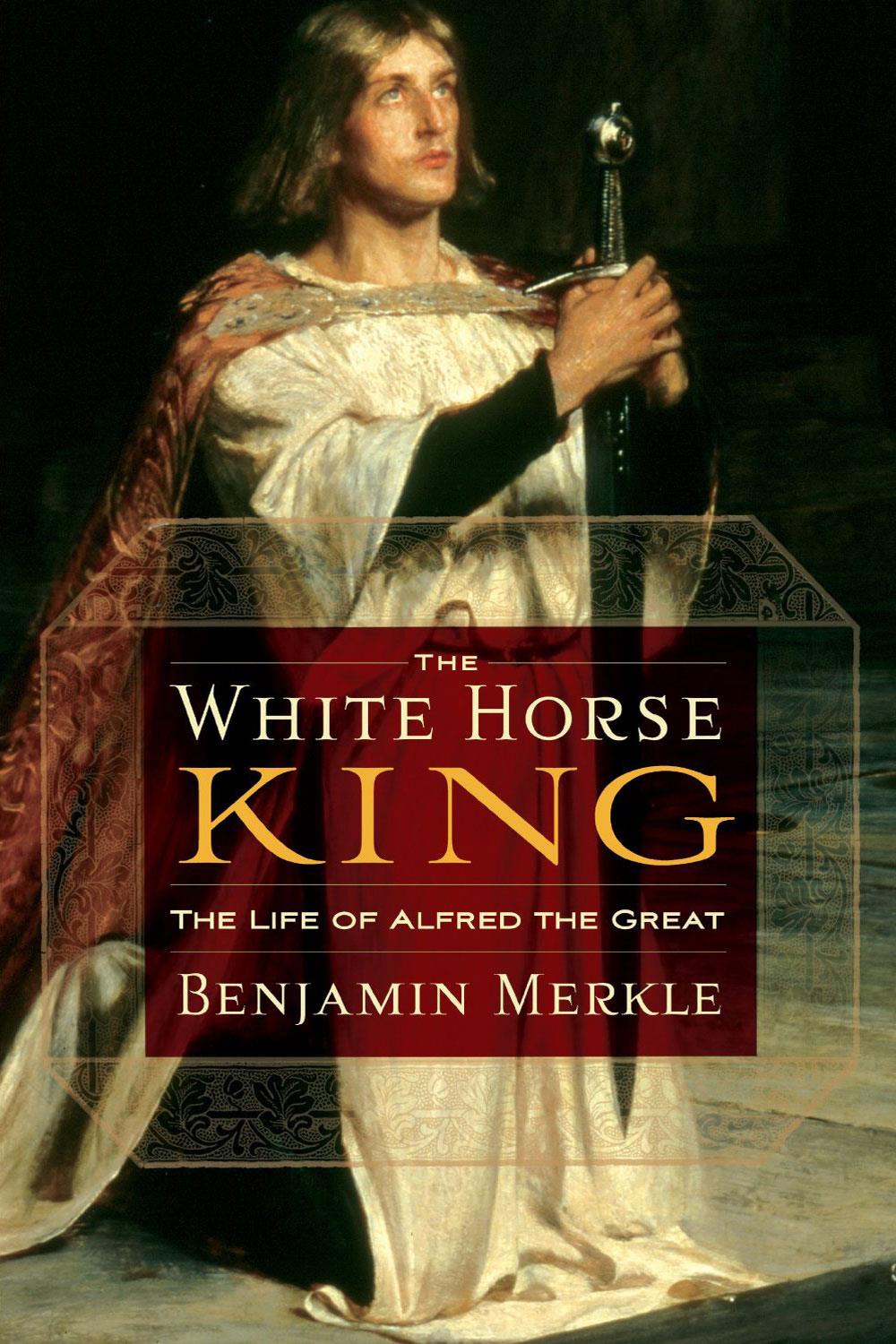 The Life of Alfred the Great

Thomas Nelson, Inc. titles may be purchased in bulk for educational, business, fund-raising, or sales promotional use. For information, please e-mail [email protected]

Age beyond age on British land,
Æons on æons gone,
Was peace and war in western hills,
And the White Horse looked on.

For the White Horse knew England
When there was none to know;
He saw the first oar break or bend,
He saw heaven fall and the world end,
O God, how long ago.

—FROM G. K. CHESTERTON’S The Ballad of the White Horse

THREE: The Battle of Ashdown

FIVE: Whitsunday and the Battle of Edington

CHILDREN OF ÆTHELWULF AND OSBURH:

AD 410–600: Migration of the Angles, Saxons, and Jutes from the continent to the island of Britain.

AD 597: Augustine of Canterbury takes office and begins the
Christianization of the Anglo-Saxons.

AD 855: Alfred travels to Rome once more with his father.

AD 858: Æthelwulf dies, and the crown passes to Æthelbald.

AD 860: Æthelbald dies, and the crown passes to Æthelberht.

AD 866: York and the kingdom of Northumbria fall to the Vikings.

AD 869: East Anglia falls to the Vikings; Edmund is martyred.

AD 871: Æthelred and Alfred fight the battle of Ashdown;
Æthelred later dies, and the crown passes to Alfred.

AD 878: Guthrum invades Wessex; Alfred is driven into hiding in Athelney; Alfred fights the battle of Edington; Guthrum is baptized.

AD 885: Alfred drives the Vikings from the gates of Rochester.

AD 899: Alfred dies, and the crown passes to Edward.

AD 924: Edward dies, and the crown passes to Æthelstan.

AD 937: Æthelstan is victorious at the battle of Brunanburh.

T
his past year, while taking a moment between classes to relax in an Oxford common room, I began a conversation with an older English gentleman over a cup of tea. Noticing my American accent, he asked how I was getting on in England and if I had seen much of the beautiful countryside yet. I mentioned that I had hoped to take my family to Wantage that weekend because it had been the birthplace of Alfred the Great. He sipped his tea silently for a moment and then looked off into the distance with a skeptical eye and said, “Alfred, hmmm. It’s all very shrouded in myth, you know. I’m not sure if there actually was an Alfred.”

You could tell that he was grappling with two problems. The first, I’m fairly certain, was a confusion between King Alfred and King Arthur. The second was a deep, deep need to express a scholarly dubiousness. This is the burden of the scholar, the need to scratch through the gilding that obscures the stories of history’s heroes, to lay open the ugly truth of ulterior motives, vainglorious pride, and bad breath. But sometimes the heroes of history are truly worthy of the golden reputations they carry. Sometimes the truest retelling of the story is permeated with hero worship.

In the early, frigid months of AD 878, the whole of Britain had fallen to the savage dominion of the Viking invaders. The Saxon kings who had fought against the Danes had been either cut down in bloody combat or captured and executed in a gory sacrifice. A few lucky ones escaped the clutches of the Vikings and fled the island in humiliating defeat. Only one Anglo-Saxon king remained to hold off the Viking assault—King Alfred, the young king of Wessex. This is the story of the Anglo-Saxons’ greatest king, the young man who, though driven from his throne and hunted everywhere by his savage enemies, refused to give up his fight for his nation.

This is the king who took a war-weary band of Anglo-Saxon men, hidden on the small swampy island of Athelney, and led them from where they teetered on the edge of extinction back to face their enemies once more on the battlefield. This is the man who later kindled such a flame for Christian learning in the hearts of his people that he launched the greatest literary renaissance that Anglo-Saxon England ever knew. This is the story of the only English king xv to be known as “the Great.” He was a seasoned warrior, a scholar, a poet, a law-giver, an architect of towns and ships, and a zealous Christian.

Alfred was great because Alfred was a great king.

Behold the church of saint Cuthbert, splattered with the blood of the priests of God, plundered of all its treasures, a place more venerable than anywhere in Britain is given over to pagan nations for pillaging . . .

—ALCUIN TO ETHELRED , KING OF NORTHUMBRIA

I
n the year anno
Domini
937, Æthelstan, king of the English people, stepped resolutely onto the battlefield of Brunanburh, leading the might of the Anglo-Saxon nation out to face the combined forces of Vikings and Picts in what would be referred to by successive generations as “the great battle.”
1
awaiting Danes and Picts. A thundering tumult the Saxons came, a reckless battering ram of mortal flesh, propelled by the passion and zeal of the king, whose fierce commands mounted up above the din and clamour of the chaotic charge. The linden shields of the Viking marauders split and shattered under the raging crush of the Saxon force. The Northmen faltered and staggered backward, yielding ground and, more importantly, leaving a number of gaps ripped through the center of their defensive wall.

With drawn swords and bloodcurdling yells, the Saxon warriors seized the opportunity and surged through the freshly torn gap in their enemies’ wall. They poured through the defensive line, rent by their charge, like flood waters through a breeched dam, overpowering the stunned Vikings with sharp sword edge and cruel blunted hammer blows. The Norsemen and their Pict allies attempted to withdraw quickly in a desperate endeavour to regroup at a distance and make one more try at repelling the Anglo-Saxon assault. The tenacity and discipline of the Saxon troops had been carefully groomed over three successive generations of incessant battle against the pagan invaders. They left no room for retreat, no space for an orderly withdraw. Into the lines of the Vikings and the Picts they continued to surge, fighting fiercely, hewing down the astonished defenders with sword and axe.

The Viking shieldwall had been shattered; the nature of the combat shifted. Now the battlefield was no longer controlled by two large distinct armies. Instead it was bedlam, a chaotic quilt of thousands of small skirmishes with no rhyme or reason but rage and terror. On the warriors fought—man against man here, and two against one there. Soon the morning sun, God’s bright candle, was looking down on the once green slopes of Brunanburh, now painted red with the blood of the fallen. Sensing the inevitability of their defeat, the entirety of the Viking army began to flee, running from the battlefield, wide-eyed and terror-stricken, abandoning the corpses of their fallen. But the Saxon press was unrelenting, and they pursued their vanquished foes hard across the countryside and into the surrounding woods.

One Naughty Night2 by Laurel McKee
Peete and Repeat (The Frannie Shoemaker Campground Mysteries Book 3) by Karen Musser Nortman
Greyrawk (Book 2) by Jim Greenfield
Into the Void: Star Wars (Dawn of the Jedi) by Tim Lebbon
A Corpse in a Teacup by Cassie Page
Pure Heat by M. L. Buchman
The Reunion Show by Brenda Hampton
The Mystery of Smugglers Cove (The Mystery Series, Book 1) by Moxham, Paul
It Had to Be Fate (An It Had to Be Novel Book 3) by Tamra Baumann
Simon Says Die by Lena Diaz