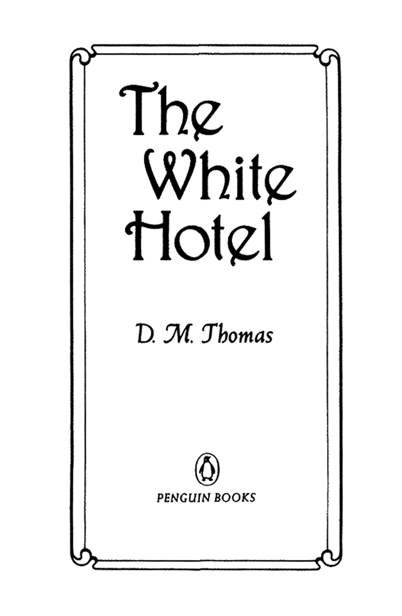 Praise for D. M. Thomas and
The White Hotel

“Authoritative and imaginatively daring…I quickly came to feel that I had found that book, that mythical book, that would explain us to ourselves.”

“This brilliant, haunting novel…is compelling, awash with imagery and peopled with characters whose lives are infinitely beautiful and infinitely sad.”

“The White Hotel
is a strange and exciting novel—beautifully written, with a care and elegance rare these days, and gloriously original, both in form and content.”

“The White Hotel
is an ambitious and original work whose purpose is to show the value of any single human life.”

“An extraordinary book, repellent, powerful, tragic…This is a book you don’t read so much as experience.”

“This novel is a reminder that fiction can amaze as well as inform, that an imaginative leap can sometimes take flight.”

“Repetition, stunningly enacted in imagery that continually circles in on itself, is the method by which Thomas binds us to his prose. The white hotel is the leitmotif…The richness of this book is reminiscent of a painstakingly woven tapestry, one can focus on the details but they must be absorbed by the whole.”

Section 1 of “Don Giovanni” originally appeared as a self-contained poem in the magazine
New Worlds
(1979).

THE LIBRARY OF CONGRESS HAS CATALOGUED THE HARDCOVER AS FOLLOWS:

Except in the United States of America, this book is sold subject to the condition that it shall not, by way of trade or otherwise, be lent, resold, hired out, or otherwise circulated without the publisher’s prior consent in any form of binding or cover other than that in which it is published and without a similar condition including this condition being imposed on the subsequent purchaser.

The scanning, uploading and distribution of this book via the Internet or via any other means without the permission of the publisher is illegal and punishable by law.

Please purchase only authorized electronic editions, and do not participate in or encourage electronic piracy of copyrighted materials. Your support of the author’s rights is appreciated.

One could not travel far in the landscape of hysteria—the “terrain” of this novel—without meeting the majestic figure of Sigmund Freud. Freud becomes one of the dramatis personae, in fact, as discoverer of the great and beautiful modern myth of psychoanalysis. By myth, I mean a poetic, dramatic expression of a hidden truth; and in placing this emphasis, I do not intend to put into-question the scientific validity of psychoanalysis.

The role played by Freud in this narrative is entirely fictional. My imagined Freud does, however, abide by the generally known facts of the real Freud’s life, and I have sometimes quoted from his works and letters,
passim
. The letters of the Prologue, and all the passages relating to psychoanalysis (including Part III, which takes the literary form of a Freudian case history), have no factual basis. Readers not familiar with the genuine case histories—which
are masterly works of literature, apart from everything else—are referred to volumes 3, 8 and 9 of the Pelican Freud Library (Penguin Books, 1974, 1977, 1979).