Read The White Trilogy: A White Arrest, Taming the Alien, The McDead Online

The White Trilogy: A White Arrest, Taming the Alien, The McDead 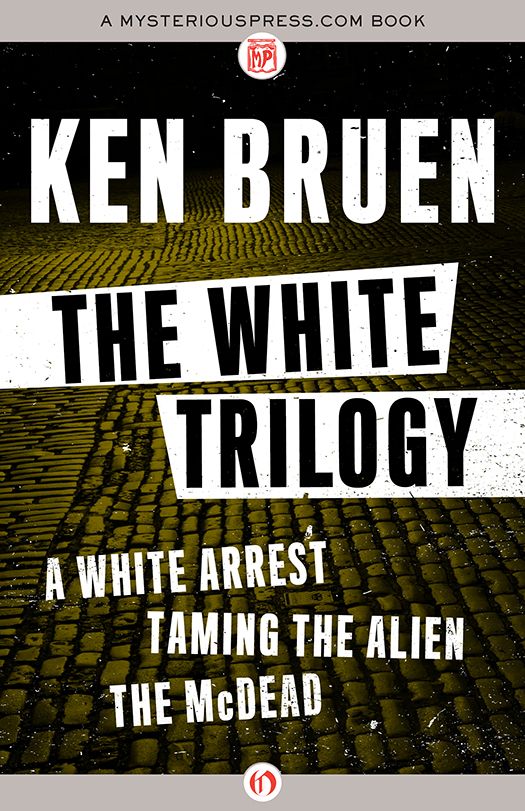 We will not now

Help you in any form fashion or method

Regarding the Metropolitan Police.

So said Scotland Yard when I asked them for assistance regarding:

For a planned series on London coppers.

And wrote the first one:

Inventing that term to mean a stunning arrest that would whitewash all previous screw-ups.

I wanted a bad-ass bigoted blunt violent sergeant as the focus, with a surrounding cast of dysfunctional cops in an imagined South East London station, close to where I’d lived for ten years.

And, too, stupidity, for an Irish writer to tackle the London Met.

More fuel to me blaze.

So Brant was born, a maverick of Irish heritage and his own twisted moral code. His motto, screw ’em all:

And anyone else who crossed his path.

He used a hurley and a violent demeanor to shock, shake, and pulverize all and sundry. His immediate superior, Chief Inspector Roberts, was a foil to this thug, a decent man forced to stoop to Brant’s methods on many occasions and yet they had a weird and fucked alliance.

PC Falls, a black female from Brixton, was………. the wet dream of the nick………. destined to be prone to:

A changing mix of snitches would act as chorus before they succumbed to terrible fates due to Brant’s feckless concern. Through the series, Brant would have one enduring love and idol: Ed McBain, all the novels of the 87th Precinct in the original Penguin Green editions.

It was a unique privilege and grace for me to read with Ed McBain at the Black Orchid Bookshop and talk about………….. Brant!

The movie of Brant,
Blitz
, starring Jason Statham, Paddy Considine, and Aiden Gillen, was enhanced by the opportunity to play an Irish priest.

They opened the movie with Brant and a hurley, to great humorous effect.

An unlikely friend of Brant’s is Porter Nash, named after a pharmacy on the Walworth Road. Openly gay, he was exposed to all of Brant’s rampant bigotry, but they formed a formidable team.

Writing Brant was a blast, just an absolute joy, and if all writing were as much fun and fulfilling, I’d be turning out a book a week.

The White Trilogy
contains all that is essential to the whole series, and even now, in writers’ hindsight and suspicion, doubt and insecurity, I’d write it exactly the same.

‘He who hits first gets promoted’

‘You can’t just go round killing people, whenever the notion strikes you. It’s not feasible.’

‘The King of thieves has come, call it stealing if you will but I say, it’s justice done. You have had your way, The Ragged Army’s calling time.’

Basic survival: ‘Never trust anyone who puts Very before Beautiful’

‘All of us that started the game with a crooked cue... that wanted so much and got so little that meant so good and did so bad. All of us.’

‘E’ is not for Ecstasy

To work on an egg

The law of holes: when you’re in one, don’t dig

‘Ashen was the way I felt when shunned by people I had justified. Didn’t all that much really warrant grief.’

Law 42: Unfair Play. The Umpires are the sole judges of fair and unfair play

The eyes of a dog

A house is not a home

In this world, you turn the other cheek, you get hit with a wrench.

He who laughs last usually didn’t get the joke

‘Like a bad actor, memory always goes for effect.’

‘That is not dead which can eternal lie. And with strange aeons even death may die.’

And speaking of wreaths

If he was a colour, he’d be beige.

‘I was a small time crook until this very minute, and now I’m a big-time crook!’

‘What a place. I can feel the rats in the wall.’

The Beauty of Balham

‘Love makes the world go round’

‘If your dead father comes to you in a dream, he comes with bad news. If your dead mother comes, she brings good news.’

‘You wouldn’t kill me in cold blood, would you? No, I’ll let you warm up a little.’

To Fall falling have fallen in love

Barney is a dinosaur from our imagination

On break the 12th lament

Lies are the oil of social machinery (Proust)

In my last darkness there might not be the same need of understanding anything so far away as the world any more. (Robin Cook)

A mugging we will go

Trying to recapture the great moments of the past.

‘We were somewhere around Barstow on the edge of the desert when the drugs began to take hold.’ (Opening lines of ‘Fear and Loathing in Las Vegas’)

‘I have long known that it is part of God’s plan for me to spend a little time with each of the most stupid people on earth.’ (Bill Bryson)

‘The best the white world offered was not enough ecstasy for me. Not enough life, joy, kicks, darkness, music; not enough night.’ (Jack Kerouac)

‘Yada Yada’ or some such (Melanie)

Each angel is terrible (Rilke)

‘One of the most disturbing facts that came out in the Eichman trial was that a psychiatrist examined him and pronounced him perfectly sane. We equate sanity with a sense of justice, with humanness, with the capacity to love and understand people. We rely on the sane people of the world. And now it begins to dawn on us that it is precisely the sane ones who are the most dangerous.’
—
Thomas Merton

Something in the way she moves

I have a need (Demian in ‘Exorcist III’)

I had a dream (ABBA)

Acts ending – if not concluding

J is for Judgement (Sue Grafton)

‘Which party would you like to be invited to?’ ‘The one’, I said, ‘least likely to involve gunfire.’ (‘Midnight In The Garden of Good and Evil’ – John Berendt)

Living next door to Alice (Smokie)

The Greeks have a word for it

Fear to fear itself unfolding

In the modern world

Things are entirely what they appear to be and behind them there is nothing. (Sartre)

There’s no such thing as unconditional love. You just find a person with the same set of conditions as yourself. (Mark Kennedy)

Once we were worriers

What about the hotel where I was asked, do I want the double bed or the comfortable bed? I thought, ‘This is a quiz I am not up to.’ (Janet Street-Porter)

The only actress on the planet who can play a woman whose child has been killed by wild Australian dogs and can actually have you rooting for the dingoes. (Joe Queenan on Meryl Streep)