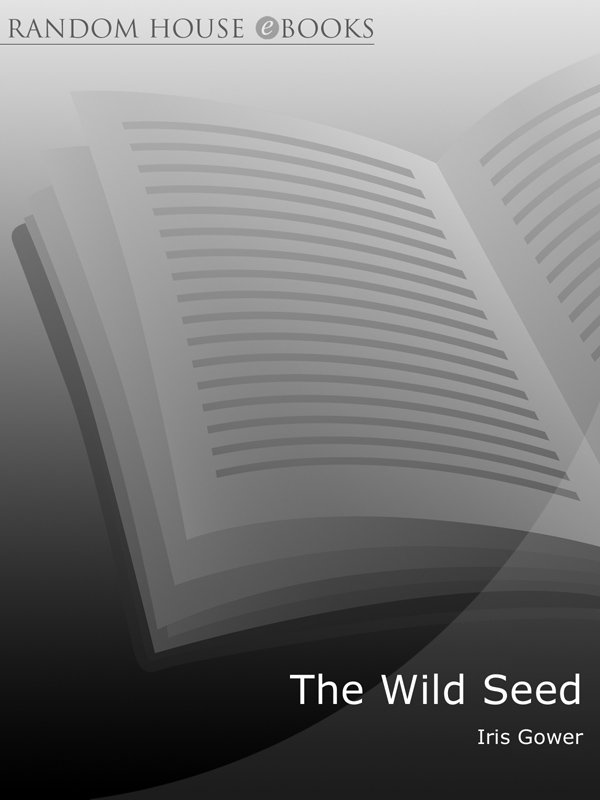 Catherine O’Connor had a wild streak in her, as vivid and colourful as the red hair that cascaded over her shoulders. When she met Boyo Hopkins, one of Swansea’s richest and most powerful men, she defied convention by falling into a passionate affair with him although she discovered, too late, that he was married.

Boyo’s first love had been April Thomas of Honey’s Farm, and as a young man he had been devastated by her death. And now Catherine, April’s younger step-sister, found herself threatened by Boyo’s jealous wife, Bethan, who was plotting to take the cattle and lands of Honey’s Farm away from her. As Bethan slowly planned Catherine’s downfall, she retreated into a world inhabited by the ghosts of her forebears. Anyone who helped Catherine had to be destroyed – including her handsome young kinsman Liam Cullen who had come over from Ireland and fallen in love with Catherine himself.

The Wild Seed
concludes the story told in
The Shoemaker’s Daughter
,
The Oyster Catchers
,
Honey’s Farm
,
Arian
and
Sea Mistress
.

To Emma, Anna and Adam with love
.
CHAPTER ONE

The girl in the bed looked gloriously abandoned, her long, fiery hair rippled over her shoulders, partly covering the curve of her creamy breasts. Her eyes were closed, she was rosy in the glow from the gas lamp; content beneath the thickness of the satin quilt.

It was quiet in the room except for the rumble of wheels on the cobbled street outside the Swansea Hotel and the hiss of the coals shifting in the grate.

She stirred, her eyes opening; wide, green, mysterious eyes that seemed to look into his soul. God in heaven, how he loved her. Perhaps he had always loved her and had never recognized the feeling until now.

‘Oh, Boyo, don’t say that, it’s so cold and wet outside and it’s so wonderful having you here; so homely, so comfortable, so
right
.’

He knew exactly what she meant. He sat on the bed beside her and took her hand. His own was smooth, the nails clean, well-manicured; it was the hand of a gentleman. Except that Boyo Hopkins had been born in sin, brought up in a workhouse, given the name of ‘Boyo’ because he had known no other. Now he was called Boyo Jubilee Hopkins after his grandfather, he was a man of substance, of standing in the community.

‘I
must
go.’ He spoke regretfully, his once rough accent barely noticeable now. He rose and stood before the long oval mirror that graced the huge bedroom. He was, to all intents and purposes, a man of refinement and if now and again the rough edges of his origins were revealed, they were more than compensated for by the sizeable fortune he possessed.

‘Boyo, why can’t we be open about our love? Why are we here in some strange hotel? You should come to see Mam and Dad. We are so isolated on the farm that a visit from you would be like a breath of fresh air. Are you ashamed of me now you’ve come into money?’

He turned and looked at her. Her skin was fresh and dewy, she was everything that was young and beautiful and she had been a virgin until he had taken her to his bed.

‘Of course I’m not ashamed of you,’ he said, and he meant it. He would like nothing better than to take her out, to flaunt her openly, to have the envy of other men.

‘It’s time you were married, time you were showing a wife off to the world,’ Catherine said. It was as though she had picked up the thread of his thoughts. ‘I know you are only a few years older than me, love, but you don’t need to make your way in the world, do you? It isn’t as if you can’t afford a wife. Perhaps you don’t want to marry me, is that it?’

He rose to his feet. ‘
Duw
, don’t be silly, girl.’ He was slipping into the Welsh, an indication that he was agitated.

‘We must get to know each other, catch up on the past.’ He knew he sounded defensive.

‘Would things have been different, I mean, if you and I had remained friends, if we hadn’t lost touch, lost some years when we should have been together?’ Her voice trailed away wistfully.

Boyo shook his head and remained silent. He should tell her the truth, say the words he was afraid to say, that he was married already. He thought back to his wedding, a quiet affair, conducted in a small church in the tiny village of Ilston. Bethan Llewellyn had been a spinster, a mature woman. She was a lady from good farming stock, she possessed what he’d never had: breeding. On their marriage, Bethan’s father had given Boyo a gift: a fine hotel situated near the coast. A gold-mine which Boyo did not need or want. Shortly after their marriage, he had returned the deeds to Bethan.

He turned and looked at the girl, now sitting on the edge of the bed, her feet, bare and pink, not quite reaching the carpet, and his heart melted. Six short days ago they had met again, brought together on the cold spring breeze of the beach at Swansea. They had stared at each other, recognition dawning with a sense of wonderment and joy.

He smiled, ‘I was thinking of you, of our meeting on the beach.’ He touched her hair, red in the firelight, glowing, alive.

She came to him and wound her arms around his waist, putting her head against his heart.

‘Tell me something, Boyo, why do you call me
cochen?
Why don’t you use my proper name?’

He sighed. ‘You don’t seem like the Catherine I once knew. I remember the child running wild on Honey’s Farm. Now you are a woman, a flame, a glorious red-head, that’s what
cochen
means.’

He bent and kissed her. Her lips parted invitingly, he felt his blood stir; would she always have this effect on him, however many times he lay with her? He disentangled himself.

‘I know, but I miss you already. Will I see you, tomorrow?’

Outside the hotel, he waited for the man to bring his horse around and then he lifted Catherine and set her on the saddle.

‘It’s not a fine carriage,’ he apologized, ‘but old Jason here will serve us better on the rough ground.’

He took her home to the farmlands above Swansea. Honey’s Farm stretched for miles across the hillside, the rich earth planted now with seed which the summer sun would bring to fruition. Boyo felt a pain within him as he thought of the days of his youth. He had spent a great deal of his spare time at the farm, eating with Fon and Jamie O’Conner, sharing their warmth and hospitality. Now, he would be ashamed to face them.

He kissed the sweetness of Catherine’s mouth and released her, feeling suddenly cold. ‘Go in, your parents will be worrying about you.’

‘They wouldn’t be if they knew I was with you. They always liked you, even when you were Boyo the tannery worker.’

‘Hush, go on now, I’ll watch until you are safely indoors.’

He stood for a long time, looking at the darkness of the farmhouse against the rising moon. His heart ached suddenly for the boy he had been, he had worked hard but he had been happy, without responsibilities; free.

Across the dip of the valley was
Glyn Hir
, the tannery Catherine had spoken of. It had been his home. Ellie Hopkins, old Jubilee’s beautiful young widow, had made sure that he did not work too hard and that the other men treated him fairly. For a long time, Ellie had worked alongside him in the mill, grinding the oak bark for tanning the leather.

It was on his sixteenth birthday that the voluptuous Rosie, Ellie’s maid, had taken him to her bosom, literally, teaching him all he needed to know about love, the pure and the carnal. He remembered it as if it were yesterday, the smell of the wood fire, the sound of a fiddle playing in the distance and Rosie, soft and warm and so willing in his arms.

And then, unexpectedly, he owned a fortune. Ellie had learned that Boyo was Jubilee’s grandson. The money and land she had inherited from Jubilee, she felt, was rightfully Boyo’s. She had been generous, had signed it all over to him. He wondered now if he would have been happier had he remained a working boy.

He sighed and turned away from the warmth of the light in the farmhouse windows. Bethan would be waiting and Bethan was his wife, his friend.

He was betraying her, reneging on their pact of trust and mutual respect, but he was not betraying her love; he reassured himself on that point. They had both known from the start that theirs was not a marriage made in heaven but a marriage of friendship, as well as the merging of two great fortunes.

By the time Boyo reached the large house on the hillside overlooking the sweep of the bay, he felt the peace that coming home always gave him.

He rode around the building to the stables and dismounted from his horse, experiencing the sense of pride that settled on him whenever he returned to the house he had made his own.

It was poised like an eagle’s nest over the fine bay of Rhosilli, with the sound of the sea and the wind and the calling of the birds.

The groom took the reins, tipping his cap before throwing a blanket over the animal’s heaving flanks. ‘Wet evening, sir, getting misty, too. The fireside’s the best place on a night like this.’

‘You’re right, Roberts, I’ll be glad to get indoors out of it.’

He walked through the back of the house, past the kitchens where a fire blazed in the blackleaded range and where the cook and the kitchen maids were working in the cheerfully spotless room; the low hum of their voices was somehow welcome and soothing. The inviting smell of roasting meat made him realize, suddenly, how hungry he was.

He opened the doors of the large drawing-room and Bethan rose to greet him, smiling at him over her spectacles. She was by no means a pretty woman but her elegant bearing and the dignity in the way she held her head, facing the world fearlessly, had the strangest ability to bring out all that was best in Boyo.

He leaned forward and kissed her, she was as tall as he was and large of bone. She was angular, with no soft curves and yet she was regal; awesome. A wave of affection washed over him. It was followed swiftly by feelings of guilt. He had no intention of hurting Bethan, of breaking the vows he’d made at the altar; he could never leave her and yet how could he bear to deny the fate that had brought Catherine O’Conner back into his life?

‘Darling, you’re cold and look at the mud on your boots! Boyo, are you aware that you stink of horses? Go upstairs and get washed and changed, supper is almost ready.’

He tweaked her nose, ‘Hush, you sound like an old hen.’ As soon as the words were spoken he wished he could snatch them back. Had they been put there by Catherine or had the thought been with him since he’d first set eyes on Bethan?

She was not one jot aggrieved. ‘Get on with it you big fool! Have you forgotten that my father is joining us this evening?’