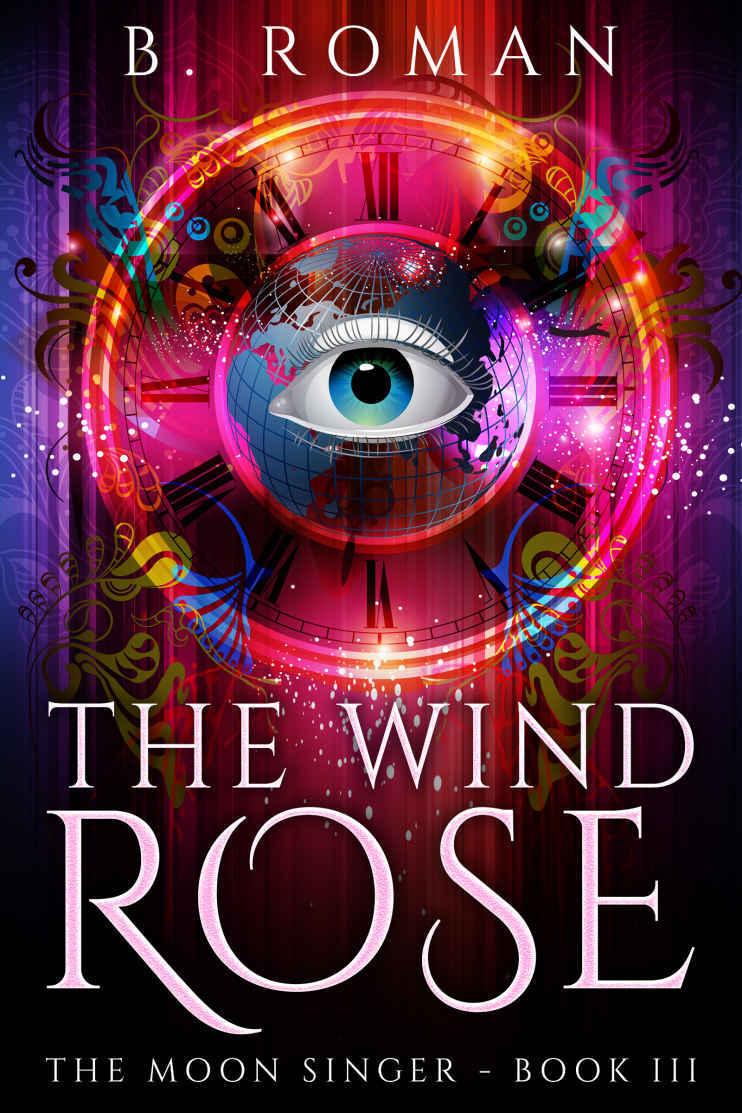 Book Three of The Moon Singer

This book is a work of fiction. Names, characters, places, and incidents are the product of the author's imagination or are used fictitiously. Any resemblance to actual events, locales, or persons, living or dead, is purely coincidental.

All rights reserved. No part of this book may be reproduced or transmitted in any form or by any means, electronic or mechanical, including photocopying, recording, or by any information storage and retrieval system, without the author's permission.

“As this boy, now maturing into a man, meets opposition all around him, will he have the strength of faith and character to hold fast to his beliefs, to not be coerced by others to think his experience really is just an illusion?”

Other:
When no one else has seen or heard what you have, it's difficult to hold on to a conviction. But, as we've stressed before, he must go deep within himself for that courage, to know that what he has witnessed is his own truth.

“But have I taken him as far as he is capable, or willing, to comprehend? Are we asking too much? Or should I do more?”

Other:
You have done your part admirably. What you have helped him see will stay with him. Now it's up to him to experience the “knowing.” That “knowing” is built upon the “Power of Three.” Once he puts all the pieces together, the Three will become One.

“The
pieces
being the three sacred artifacts. Separately, they have their own individual power, but united the three synergize into One.”

Other:
Exactly. And when he discovers this, which he is so close to doing, his mission will be fulfilled.

“So, I shall stand back and let him move forward on his own intuition…”

Other:
Oh, the things we can achieve when we aspire to the greatness within ourselves.

An opaque elliptical image with a glimmering outline soars across the evening sky then dissipates. Notice is taken by the night crew who dismiss it as an optical illusion. But its appearance is logged into the database of unusual sightings to be investigated.

A translucent obelisk-shaped form moves out of the clouds, illuminating the starless mid-western sky. The night crew is breathlessly silent as the one obelisk becomes two, and then three, eerily linked together in one graceful motion. This uncanny vision, too, is noted into the sightings database just as it fades from view.

A shimmering, lenticular cloud-shaped light glides across a part of the heavens almost too far away for the powerful telescope to perceive. Professor Ramirez squints hard trying to focus in on the faint image and determine what it is. Then he smiles broadly. He has seen it before, but just as before he will tell no one, not even his colleagues at the NASA and Griffith Observatories who have shared their sightings with him. This one he will keep to himself until the propitious moment.

David Nickerson scans the diagram of an ancient compass into his computer then does a web search for it. In a few seconds, the words appear on the screen:

“Compass Rose, c 1770.
An early navigational aid. The Wind Rose was a compass without a magnetic needle, which had eight points named for the eight principal winds. Seafarers must have been able to tell the winds apart, by recognition of their temperature, moisture content, strength, or some other characteristic, or by association with the heavenly bodies, in order to use the Wind Rose effectively.
”

“Is that it?” David asks the machine incredulously, as though it will answer. “There has to be more. This thing blew up an entire continent!”

He searches further, using alternative key words and phrases. Nothing. “Maybe it's cryptic, or numerical” he guesses, and enters in some random numbers: 1, 2, 7, 5, 3 then hits the Enter key. Nothing.

The call indicator on David's TTY unit flashes. David types in “GA,” signaling the Relay Operator to Go Ahead. It's Hannah, a member of the Beach Watch Team, reporting in on some unusual findings on the stretch of beach they've adopted.

Hannah picks up various items and describes them to David with distaste and chagrin. “We need to bring this up to the Town Council, David. Signs of industrial waste, trash from the tourists, erosion on the west cliff where they want to develop that thing for the Millennium celebration. Too delicate here.”

The TTY Operator relays Hannah's message to him and the words dance across the fluorescent display board. David types a message back: “Okay, next meeting, we lay it on them.”

The Beach Watch Team consists of students and political activists from Port Avalon's city college who are majoring in marine biology, geophysics, and meteorology. They are concerned about public access, over-development, beach erosion, litter and other issues along the 30-mile coast of Port Avalon that can potentially harm local wildlife and human quality of life.

David Nickerson, not yet 17, the youngest team member and also its founder, was inspired to organize The Beach Watch after reading tales of the “Watchers on the Headlands” of medieval times, who lit bonfires to alert townspeople of invaders approaching by sea. Today, the “watchers” carry hand-held computers and cell phones to communicate with each other and record their findings.

“Keep up the good work,” David adds to the message. He then types in “SK” which tells the relay operator to Stop Keying, the conversation is over. Hannah's image disappears from the monitor.

When David returns his concentration to his computer screen, a strange message is displayed: “12 is 7 is 5 is 3.”

“What the heck does that mean?” Tired, he dismisses it as gibberish and closes down his laptop for the day.

A flashing light on his desk alerts David that someone is coming into his room. His sister Sally enters, using her crutches deftly, moving with ease. This is an improvement over a wheelchair and leg braces, but not good enough for David who remembers how she danced with him without crutches at his birthday party. Or was that a dream? Sally seems not to remember it at all.

“Dad wants to talk to us,” she signs to him.

Sally is now almost as good a signer as David, although he is the deaf one. David also reads lips expertly, and so they alternate forms of communication.

David's signed gesture is curt. “Not again. I don't think I can ever get him to understand.”

“You of all people should understand.” David's piercing blue eyes focus on Sally, silently urging her to remember that day on the beach two summers ago when their lives changed forever, all because of a supernatural crystal and an electrical storm.

“I did - about the Moon Singer and all, and even the Rose Crystal. I mean, look at me. Two years ago I couldn't even stand. Then I could. I know I regressed to braces and crutches, but it's better than a wheel chair. Your experiments with the crystals helped me so much. I believe something magical happens when you use them. But this other stuff about Mom is hard for me to absorb.”

“Sal - it's the truth,” David says, signing emphatically. “Every word of it. What good will it do to rehash it all. He believes me or he doesn't.”

“He's downstairs. There's someone with him.”

Isaac and Doctor Hilyer acknowledge David and Sally as they join them in the living room. As usual, Isaac speaks directly to David's face so his son can read his lips.

“Dr. Hilyer agreed to come here tonight and listen to your story. Perhaps he can help.”

“What kind of doctor? A shrink? Come on, Dad. I'm not crazy.” David's voice is now a maturing baritone, with little impediment. A stranger would never know he was completely deaf if they hadn't seen him sign.

Hilyer signs very little, so must add in some verbal conversation. “From what your father tells me, David, you've had quite an experience. It's caused you to become alienated from your family. An objective point of view might help clear things up.”

David laughs cynically. “The only thing that will clear it up would be to make that ship appear again. Then you'd all have to believe me.”

“The ship? You mean the ghost ship?”

“She's not a ghost ship,” David snaps, his hand movements sharp. “She's real. But without the Singer, I'll never get her back. So what's the point.”

“The crystal that conjured her up in the first place. But I lost it on Coronadus. So, there's nothing left to say.” David flops down on a chair and leans back. He runs a quick hand through his dark blonde hair to get it out of his eyes.

“Where did you get this crystal, David?” Dr. Hilyer sits directly opposite him, leaning toward him in an attempt to gain David's confidence.

The psychiatrist's eyes are concerned, but a warm hazel brown, and were he not “the enemy” David just might like him. “My Aunt Dorothy gave it to me. She found it on one of her digs.”

“I see. So this magic crystal is what started it all. Well, what if we tried some other crystals. Many of them have the same properties.”

“NONE of them have what the Singer had.”

“Tell me about your mother, David.”

Isaac Nickerson flinches at his son's bluntness. The feelings of guilt over the circumstances of Billie's death are still raw within him, the fact that he was driving the car when the accident happened. Billie died from her injuries and Sally was crippled.

“But you claim to have seen her, communicated with her,” Dr. Hilyer says.

The doctor reflects a bit. “Would you consider hypnosis? To help you remember things more clearly.”

“I DO remember things clearly. I almost wish I didn't -” David stops, suddenly realizing that this might be what they have in mind. “No way. Uh - uh. Forget it. You're not going to wipe out my memories. Not with hypnosis, therapy, drugs, or a lobotomy. I know what I saw and I didn't imagine it! I'm out of here.” Before Dr. Hilyer can reassure him that this is not his intent, David jumps out of the chair.

“David!” Isaac calls after his son as David stomps out the door.

Breaking into a sprint, David heads towards the village square where the hectic interaction of people, cars, buses and trucks refocuses his thoughts.

All around Port Avalon, construction is nearing completion for the Millennium celebration. It's an undertaking that has taken many months, but the town is determined to get a piece of the Millennium pie. This quaint seaside town, with a centuries-old history of shipbuilding, is emerging from a severe economic slump. All kinds of activities are being planned to lure wealthy VIPS: boat cruises, special commuter flights, galas, fancy dinners, and concerts, with ticket prices going as high as Super Bowl seats and promising to surpass them. New hotels are being erected on the coastline to house the thousands of new tourists who will come through on their trek across America to savor every festivity the momentous event has to offer.

Port Avalon has been booming ever since the news media covered the Children's Peace Flotilla, following David's return from Coronadus and his most startling transcendental experience. He
did
see his mother, there
is
a ship, there
was
a Singer crystal, and the Rose Crystal
could
make Sally walk normally again. It almost did, until Isaac inadvertently gave it away. Now all David has as evidence of his last adventure is the Wind Rose. But he must never let anyone know he has it. He promised Bianca - and his mother - he would guard it with his life. But why? What will he need it for? What good is it without the Singer?