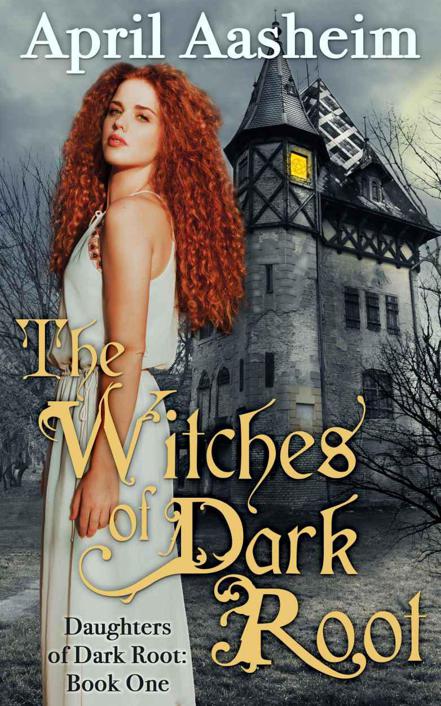 THE WITCHES OF DARK ROOT

(
Book 1 in T
he Daughters of
Dark Root Series)

This ebook is licensed for your personal enjoyment only. This ebook may not be re-sold or given away to other people. If you would like to share this book with another person, please purchase an additional copy for each person you wish to share it with. If you're reading this book and did not purchase it, or if it was not purchased for your use only, then please visit any major ebook vendor and obtain your own copy. Thank you very much for respecting the author's work.

Other works by this author:

The Universe is A Very Big Place

Praise for The Universe is A Very Big Place ~

“The Universe is a Very Big Place by April Aasheim is a real laugh-out-loud novel, written with pace, humour and a whole lot of charm...” (BestChickLit.com)

This book is dedicated to Shawn,

who reaffirmed my belief in magick.

The shop was cold and dimly lit, musty and confining.

A
spider web had attached itself to the archway that separated the main room from the back and I ducked each time I passed beneath it, not bothering to sweep it down. Shelves lined every wall of Mother’s Magick shop, displaying the hundreds of candles, masks, figurines, and baubles that made Miss Sasha’s the most popular attraction in all of Dark Root.

While the oddities fascinated tourists, I hardly noticed them anymore as I went about my work.

I hardly noticed anything anymore, except the clock that ticked down the minutes until I was released from my daily servitude.

“Excuse me,” said a woman who had been meandering near the book section for the last hour. “Where is your restroom?”

I responded by opening the front door.

She looked like she was going to protest but decided against it. My apathy for the shop was notorious. She would probably lodge a complaint with my mother instead.

“You need to order more peppermint,” my sister Eve said, emerging from the back room and sucking on a piece of candy. “We’ve been out for almost a week.”

“You order it,” I responded.

If she was going to eat the supplies, she could order them as well.

Eve launched into a series of reasons why I should perform the task––I was practically a boy and therefore, better at math, I had no social life and thus had far more time for work, etc. I was about to tell her that it wouldn’t bother me if we ran out of everything, that the whole place could implode for all I cared, when a crystal figurine on a low shelf caught my eye. It was an owl, an ugly thing with eyes that bulged and a beak that hooked. I wasn’t sure who had ordered it but I was certain it would never find a buyer.

“Bet I beat you out of this town,” I said, tapping its beak.

A losing bet, I realized. It had wings. I didn’t even have a car.

I checked the clock again––five minutes ‘til closing time––and glanced around the shop. It wasn’t as clean as my mother would have wanted, but then again my mother wasn’t here.

“I say we call it done,” I said, tossing my apron on the counter.

Eve stood by the window. Her fingers twitched as she pointed to a man I had never seen before, seated by the window in Delilah’s Deli across the street.

I moved to get a better view, nudging her out of the way.
“
Well, he isn’t from around here.”

Eve clucked her tongue. Of course, he wasn’t from around here. His sophisticated clothing identified him as a city person, not a man who spent much time slinking around a small town in Central Oregon.

“He’s handsome,” she said and I silently agreed. Though it was getting dark I could still make out his thick mane of wavy brown hair and the strong line of his jaw. He was leaning forward, talking to a gaunt young man who hung on his every word.

“We have to find out what he’s doing here,” Eve said. “It’s just not natural.” Though the town festered with tourists during the fall months when we held the Haunted Dark Root Festival, it was rare to see anyone arrive after November and before May.

“Probably just passing through on his way to Salem or Portland. Blew out a tire or had to use the bathroom.”

“You have no imagination.”

Eve chattered on about how he was probably a famous Hollywood producer. She couldn’t allow anyone a normal life; she always reached for the dramatic.

But she was right. There was something special about the stranger. He had an energy that popped and sparkled.

As if he knew he was being watched, he turned in our direction. Eve ducked but I held my position, staring back. His eyes were as grey and stormy as the Oregon coastline. He knew things...secrets and mysteries.

I felt jolted awake after a long sleep.

“We should bring him over.” Eve’s dark eyes flashed as she pushed a step-stool across the floor to gather oils and vials from the top shelf. Next, she collected an assortment of herbs from bins beneath the counter. “...Candles. I need purple candles.”

Like a fly to a spider, I thought as I watched her. She was driven when she had a mission, not the same dreamy girl who stared out the window all day talking about the life she was missing out on while she ignored customers.

“We could just walk across the street and talk to him,” I said, moving away from the window.

“Just because you’re too good for magic, doesn’t mean some of us don’t respect the craft.”

“I never said I was against magic.”

“Just practicing it. We can’t all be Wilders, you know?” Eve placed her stack onto the counter and arranged the objects into neat piles.

I felt my face redden. Wilder was a slang word, used to describe a witch who had no control over her magic. The light above us flickered.

Besides,” Eve grinned, as if she had said nothing wrong. “This is far more fun. Now, where’s the book?” She scanned the room for our mother’s spell book.

I shrugged. If she wanted to lure a man here against his will that was her business, but I wasn’t going to help.

“Here it is!” She held up a small, leather-bound journal in her hands. It was a rare book, Mother claimed, filled with spells and incantations that would have been lost to time were they not carefully preserved on these pages. As a result, only Mother’s direct descendants could remove the book from her store without suffering a terrible curse.

What the curse was, nobody knew, but Miss Sasha’s magick was formidable, and no one in Dark Root wanted to risk it.

Eve went to work creating a concoction of vanilla, rose petals and thyme, hardly glancing at the open book beside her. She had probably committed her man-luring spell to heart.

“Wouldn’t it be exciting if we fell in love and he took me away from this horrible town? Now that Merry is gone, there’s nothing to keep me here.”

I felt a dagger in my heart at the mention of our older sister’s name. Merry had left three years ago to marry some guy she barely knew and nothing had been the same since.

“You really think you’re going to get out of here before me?” I asked.

“Someone’s got to take care of Mom. Besides,” Eve looked at the clock on the far wall then back to me, “I
have
to get out of here. I’m going to be a famous actress one day. A psychic told me.”

I snorted, peeking out the window again. The curtains to Delilah’s Deli were shut now, indicating that the cafe was closed. I glanced up and down the street, hoping to see a sign of him or his car, but the street was empty. “Even if your spell does work and you get him to wander over here, what makes you think he’s going to fall in love with you?”

“The travel spell is only part of it,” she said. “One sip of my special tea and he’ll treat me like the goddess I am.” Eve retreated into the back room, returning with a white porcelain cup and matching teapot. “You might not have dreams, Maggie, but I do. God forbid that three years from now when I’m your age, I’m still working as a sales girl in this dump.” She dropped her apron on the floor and kicked it under the counter.

The Roman Guide to Slave Management by Jerry Toner
Marilyn the Wild by Jerome Charyn
The Black Sun by James Twining
Iced by Carol Higgins Clark
The Noise Revealed by Ian Whates
The Leithen Stories by John Buchan
Riordan by Kathi S. Barton
Ruby on the Outside by Nora Raleigh Baskin
Waiting for Daybreak by Kathryn Cushman
Licensed for Trouble by Susan May Warren