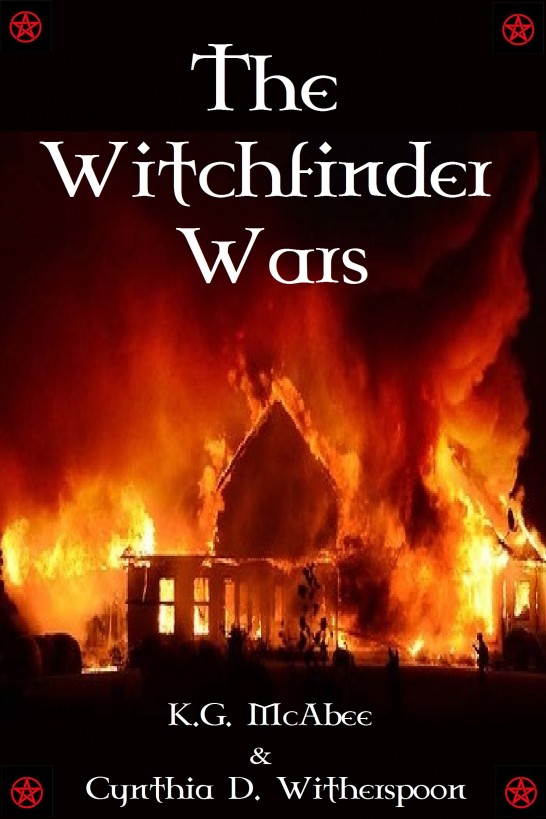 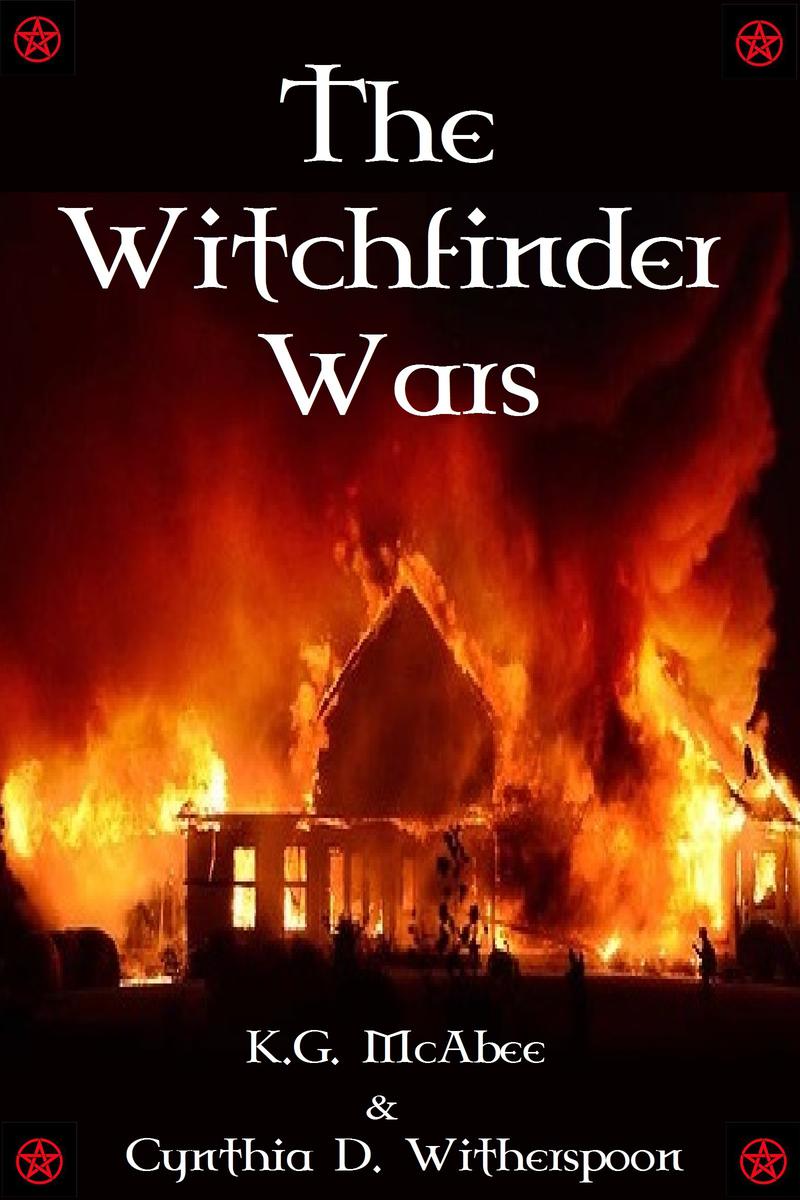 This book was previously published under
another title.

Thank you for downloading this ebook. This
work is the property of the author, and may not be reproduced,
copied, and/or distributed for commercial or non-commercial
purposes. If you enjoyed this book, please encourage your friends
to get their own copy at Smashwords.com, where they can also
discover other works by K.G. McAbee and Cynthia D. Witherspoon.
Thank you for your support.

A note from the authors:

Thank you for reading our book. We'd
appreciate it if you'd take a moment to write a review at
Smashwords and share your thoughts on our work. Feedback is always
great, and we love hearing from our readers. Thanks!

Also by
K.G. McAbee
at Smashwords:

My thoughts raced like a whirlwind. I
stumbled, quick to catch myself as I fell against the needle
covered path I had memorized carefully in previous days. I pushed
upward and ran; heavy branches slapped against my flushed skin
while I raced through their gauntlet.

Silence. The first thing I shattered as I
barreled down toward the water's edge, my feet pounding as I
snapped the less fortunate branches. At last, the shore spread out
in front of me. The relief made me careless. I could almost forget
the sounds of hooves and the howls of the dogs following so close
behind me.

At the last, the roots captured me, not the
Witchfinders. My ankle twisted and tangled with one so thick it
snaked upward off the ground. I slammed to the earth; the sound of
a bone snapping in my foot reminiscent of the branches broken
behind me only moments before.

My pursuers, dogs and men alike, were on top
of me before I could move. The men who prided themselves on
capturing the evil witches of England grabbed me up with rough
hands. Their leader pulled his steed to a halt before us.

No introductions were needed between us. For
I knew to fear him for his great evil...even as well as he knew to
fear me for mine.

Matthew Hopkins. England's one and only
Witchfinder General.

His thick blonde hair showed beneath a hat
askew from his ride. His dark eyes glared down at me before he
spoke.

"Bridget Sinclair. You are hereby placed
under arrest by order of his Royal Majesty for the crimes of
witchcraft, sorcery and consorting with the Dark One. You are to
come with us at once."

As if I had a choice in the matter. As if my
woman's voice had a place amongst them.

The fear coursing through me revived my
strength, helped me forget about my broken ankle. Such a charge was
not unexpected. Nearly every unwed woman in Colchester had been
named as a witch; falsely accused, near all of them.

Except this time, the Witchfinders had found
what they sought.

A Chosen One. A true witch.

But to go to my death with ease, without
struggle, was something I could never do.

I would not do.

They tied my arms behind me with sleek
leather bonds, but my palms opened as I called forth to the waters
lining the shores to my back. I could hear the waves churning
behind me.

Rising at my Lady's command.

If I had ever needed the Great Goddess, it
was at this dire moment.

The waters responded to my pleas for help.
They rose until the waves were crashing against the sloping shore,
rising far enough to slap against the boots of the men who held me
in place. I would drown these men, all of them, if I could, if I
must.

I had little choice. I knew what was in
store for me if I failed.

Torture. Confession. Death. And not a quick
one, either.

Hopkins pulled back, his men jerking me with
them as they scrambled to dryer lands.

"Gentleman, stop her, I pray you! She is
calling upon the Evil One to aid her!"

I saw the large fist coming; it met the side
of my head and left me dazed, unable to focus. The waters receded
at once to their former placid state.

I had already begun the desperate attempt to
call them forward once more before another blow struck me; the
world shifted, then darkened into blackness.

Hopkins himself came to question me in the
cell that had become my home. His clothes spoke for his status as
an official; his mannerisms told me just how new he was to the
wealth which accompanied it. Hopkins was too confident, too sure
nothing could harm him.

I was hoping to find a way to do so.

No matter how impossible it seemed to
me.

The jailer unhooked my shackles and led me
to the small table set up for the questioning. I rubbed my fingers
against the raw skin the metal had left behind as I examined the
gentleman who waited for me on the other side. His lean form was
the tallest I'd ever seen. The confidence radiating from him
allowed Hopkins the luxury of lounging back in the chair, as if he
owned it instead of the King he called master. I shrank down in my
seat to meet his eyes in silence.

"Mistress Sinclair. I am Matthew Hopkins,
appointed by authorities as England's Witchfinder General. You may
answer my questions here, in the comfort of your cell. Or on the
rack or other, less pleasant options. It is your choice."

My eyes flickered around the small space in
search of the comfort he spoke of. The stones were slick from the
fall rains seeping through the open window. The cot was nothing
more than moldy straw; it itched worse than the bugs skittering
across the chill floor. I could not help it. My eyebrow rose in
mocking response before I nodded.

"Here, then, sir." My voice sounded strange
to me, so long it had been since I had heard it.

These men—no,
this
man—knew nothing
of my, of all our folk's great secrets. The voice within me, which
had been my guide since I first discovered my gifts, would show me
how to protect myself and my abilities. Of this, I made no doubt.
My lies would fall as true to his ears as did the gospel the
Witchfinder heard at his worship each Sunday.

Hopkins leaned forward and grabbed hold of
my right arm, flipping it over to expose the scar of the moon's
phases on my wrist. This indeed was the very mark labeling me as
special, as powerful, and one among the very few. As a Chosen One.
I waited for him to speak as my Goddess began to whisper the
answers to questions he had yet to ask in my mind.

She was with me; my Queen of Witches, my
Lady of Darkness. She would create the lies I could not make up
myself.

"How did you control the waters on the day
we caught you, witch?"

My shoulders lifted and a small laugh,
humble as I could make it, forced itself up through the fear.

"M'lord, surely you have experienced the
weather of our mother country as often as I. Storms blow forth,
winds which no mere human can control. It was this stirred the
waves. Not I. I am but a helpless maiden, weak and poor and with no
one to give me aid or assist me."

Those dark eyes returned my laugh as he
leaned forward. His fingers dug into the bones of my wrist until I
winced against their pressure.

"You must be seeking the rack indeed,
mistress. You are not the first witch I have encountered; nor will
you be the last. Your actions are commanded by Satan, as are all of
your ilk. Your lies here before me confirm it."

"Then what is the point of your questioning
me at all, Master Hopkins, if you are so sure of the answers?"

I hissed against pain as those fingers
pressed further into my raw flesh.

"Tell me this, Mistress Sinclair. This sign,
this sigil, this mark of the Devil burned into your very flesh. How
did the dark lord give it you? When did you become his companion?
When did you give yourself over into his fleshly lusts, his evil
commands?"

She was always with me; thinking when I
could not. The Goddess whispered softly in my ear as I recognized
the desire unchecked in his eyes.

But he was still a man.

A maid willing to do anything to set herself
free.

My head dropped forward and I shook the
thick curtain of blonde hair to curl around my face. Thoughts of
love and adoration from him toward me suffused my cheeks with a
blush; my thoughts flowed toward him like the icy water running the
length of my veins. The contact he had with my skin made passing
those thoughts into him a deed most simple. The grip Hopkins had on
my arm was loosened the moment my enchantment hit him, but the
touch was still there. Enough so that he couldn't stop the magic my
Goddess was casting on him.

If he loved me, he couldn't kill me. No
matter what he would lose from the council by preventing my
death.

I raised my emerald eyes, so prized by my
multitude of suitors, up to meet his face, and I rejoiced in my
secret heart; his skin was flushed, his eyes dazed by my magic.

"Master Hopkins, the Devil has never been my
companion. But perhaps...you can be, if you so will it."

The Witchfinder General dropped my wrist as
if fire had erupted from my hands. The shock on his face exposed
the truth I had suspected, and I had the desire to laugh aloud
despite the danger surrounding me in this place.

Matthew Hopkins was a very powerful man,
indeed. But he was still a man.

And I could see, as clear as I could hear my
Goddess whisper in the darkness, Hopkins wanted me for his own.

He stood so fast the chair scraped back
against the stone floor and slammed into the door. I stood as well
when he threw a stiff nod and a single word in my direction.

He near ran from the room, and the door
crashed closed behind him.

I covered my face with my hands—hands he had
forgotten, or not dared, to shackle—not to hide my tears but my
smile.

The hours passed and found me more and more
anxious. If my spell had failed, then I would meet my end sooner
than expected. Yet if it had been successful, then perchance I had
saved myself.

The doubts plaguing me proved unfounded.
Later that very day, creature comforts began to arrive to my tiny
cell. The food, no longer cast before me as if to some mongrel,
became edible. The water clean. The straw for my bedding was
changed.

Under Different Stars by Amy A. Bartol
The Man Who Bought London by Edgar Wallace
Lifeforce by Colin Wilson
Seduced by Power by Alex Lux
All In: Calling His Bluff (Gambling With Love) by Hart, Lane
Demon Jack by Donovan, Patrick
Christopher's Medal by Laybourn, S.A.
A Sensitive Kind of Murder (A Kate Jasper Mystery) by Girdner, Jaqueline
Three to Get Deadly by Janet Evanovich
Not In My Wildest Dreams (Dream Series) by Peterson, Isabelle