The Wizard and the Warlord (The Wardstone Trilogy Book Three) 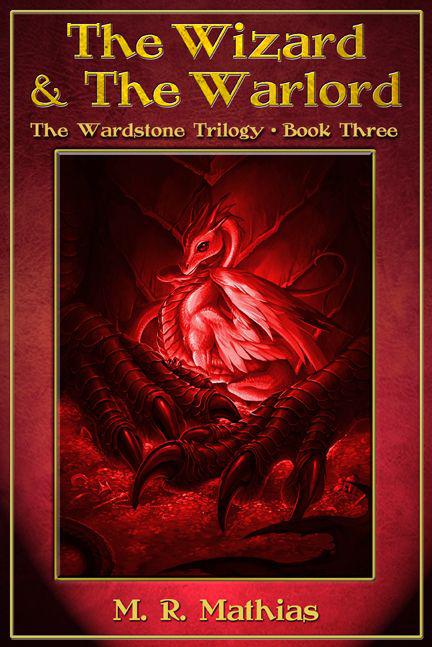 The Wizard & the Warlord

This ebook is licensed for your personal enjoyment only. This ebook may not be re-sold or given away to other people. If you would like to share this book with another person, please purchase an additional copy for each person you share it with. If you’re reading this book and did not purchase it, or it was not purchased for your use only, then you should return to mrmathias.com and purchase your own copy. Thank you for respecting the hard work of this author.

“Men are always fighting wars,” Telgra’s father Dargeon lectured. He was an elf of more than two hundred years. “The humans are never content with what they have, or the world around them. They long for power over each other, so much so that they will lie, cheat, steal, and kill to get it. What is worse is that they will dabble with forces of any nature to give them an advantage.”

“Well, what dark nature did they dabble in that caused this wonder to grace our senses?” Telgra asked him.

He laughed at her. They, and a small delegation of their kind, had secretly traveled across the continent from the Evermore Forest and then taken a ship to the Isle of Salaya. Now they were standing atop the island, amid a miniature forest of blooming fiery trees in the late morning of a warm and beautiful day.

“The magic of King Mikahl’s sword, Pavreal’s sword, was born from the magic of Arbor, my dear.” Dargeon put his arm around her and kissed the top of her golden hair lovingly. “It was not a man who caused this blooming love. It was ancient elven magic.”

Never in her seventy-two years of life had Telgra questioned her father’s wisdom, until that moment. “But father, you prove my point about the humans. Pavreal’s sword was forged by dwarven hammers, under the fire of dragons, with the purest of metals that the giants brought us from the mountains. We may have ensorcelled the blade with its power, but on that day, when the sword was made, the races of the light all came together for the good of the world, and all of us in it.” She put her hands on her hips, like her mother sometimes did.

He smiled at her with fatherly love.

“Pavreal was a human, Father,” she continued. “If it were not for him, our magic would have never been instilled into the blade and would have never caused the fiery trees to bloom. So, therefore, it is humanity who caused this beauty before us. We only had but a small part in it.”

Dargeon stood there dumbfounded by her logic. He realized at that moment how much like her mother she was. He decided that the elf who eventually took her hand would most likely be as unlucky as he was blessed.

They made their way back to the monastery’s entrance. Some of the monks who tended the mountaintop garden were whispering over a pot of carrot stew.

The elven expedition’s second-in-command stepped up. He was an ancient, blue-haired elf named Brevan. He had been speaking to a few of the monks. Telgra smiled at him respectfully. He returned the gesture and then touched her on the shoulder, more or less ignoring Dargeon.

“I think the origin of the
fairy
trees is more than likely traceable back to the Evermore Forest. After all, that great forest is where the fairy folk have lived for as long as time has been kept.”

“I think,” Telgra interrupted cautiously, “I think the name fairy tree is misleading. The blooms are bright red and flecked with yellow. It looks like the trees are on fire. I think it’s more likely that the ancients called them fiery trees, not fairy trees, and all of us have just lost the inflection over time. The long dormancy of the flowering, and this remote location of the only known grove, possibly caused the name to get misspoken over the years.”

Old Brevan narrowed his wispy eyebrows, causing the tips of his ears to push their way out of his long silver-blue hair. “On what do you base this theory?” Looking over her shoulder, he gave a look to the monks who had suddenly gone quiet so that they could listen.

“Master Brevan, it’s known that the fae have never been to this island. It’s also known that never has one of those trees been anywhere else but this island.” Her tone was confident and she spoke with more and more surety as she went on. “It seems obvious to me that if anyone were to call them fairy trees, it would be because of their stunted size. But ask yourself this question: when the humans of this island first saw the trees bloom, did they even know what a fairy was? I’ve been taught that the fair folk kept to themselves, and still stay hidden from human eyes. Go look for yourself, sirs.” She finished with a shy grin at the monks. “In this breeze the sea has gifted us with today, those trees positively look to be ablaze.”

Before Brevan could respond, Telgra was lightly skipping out of the open-air hall and down one of the paths that wound through the grove.

“She has a valid point, Brevan,” another elf stepped out of the shadows and said matter-of-factly.

Brevan sighed. “Too bright for her own good, I fear,” he said while staring aimlessly at the vacant spot where she had just been. After a moment he turned to the human monks and smiled. “Well what do you think of that?”

Later that evening, well after the sun had set, Telgra was standing among the fiery trees, enjoying the thick cinnamon and lavender aroma of their blossoms. Her eyes were looking skyward into the vast openness of the world. She felt like a giant standing in a forest that came up to her shoulders. In the Evermore, the trees reached to staggering heights. Oaks, elms, royal pines and bellow firs all reached hundreds of feet over her head. She figured that an elf standing in this forest would relatively be about a finger’s length tall in comparison.

The little girl inside her took over for a while and she began stalking through the trees pretending to be some huge monster, smashing villages and towns under her feet. She worked her way to the southernmost edge of the glade when a horrid smell came to her, carried on the ocean breeze from somewhere to the south. Thankfully, it was a brief sensation. She scrunched up her nose, but paid it little mind. She then started toward a copse that stood separate from the main grove, at the edge of the viewing path that wound its way through the garden.

The sound of crying came to her ears. For a moment the grotesque smell wavered past her again. As she neared the copse she decided that the smell was coming from somewhere very far away. She’d smelled rotting flesh before, when the expedition had come across a long dead mooza in the forest, and again as they crossed the bridge at Tip in an invisible huddle. The humans had been warring there. This smell was very similar. Now, just as it had then, the stink made her want to retch.

She put herself downwind of the separated cluster of fairy trees, and let the savory smell of the flowers fill her nose again. She sat cross-legged and breathed deeply, filling her lungs with the potent scent. It took only seconds to make her feel better.

She was certain that the trees had some magical purpose. There were many medicinal and magical qualities to the petals and buds. She was determined to understand what the purpose of these trees was in the world. When she looked into the sky, a shooting star sped past. She giggled with delight as she lay back and traced its trajectory with an outstretched finger.

A few moments later she slipped into a deep, dreamy sleep.

In her dream she was in a forest so great and huge that she felt like a mouse. The ground around her was strewn with leaves the size of blankets and twigs as big as felled trees. Ahead of her, a butterfly the size of a horse, with wings of gold and velvety black, beckoned her to come closer.

She did, though hesitantly.

“Get on my back, Telgra,” the butterfly said in a soft, musical voice similar to her mother’s. “Let’s fly.”

“Love to,” she heard herself reply as she climbed onto the delicate creature’s back. It fluttered into the air and darted to and fro through the monstrous branches of the trees. Higher and higher they went. They passed several little villages of elves who were as small as she was. They had houses made from hollowed-out mushrooms that grew on the giant limbs. The inhabitants waved and smiled as she and her fragile mount fluttered up and past them.

A blackbird darted by, eyeing them hungrily. It started to bank around toward them but ended up spotting something else below. A snake as big as the dragons in the tales her father used to read her lazed along one of the upper branches. Its lime-colored scales were splotched with sunlight. Telgra looked up and saw that the great golden swaths of living light had found a way through the leaves above them. Motes of dust danced through them like cottony flakes of gold.

The butterfly carried them right into one of the rays and immediately Telgra felt the sun warm her skin. The brightness of the Giver’s light forced her to look anywhere but up. They fluttered ever upward in tight circles that kept them in the warm, pleasant ray. Soon Telgra saw the tops of the trees below her. Great slab-like leaves flickered on the breeze, each a different shade of green. It all shimmered as she was carried even higher. Below, the mosaic of the leaves seemed to blend into a rolling sea of emerald and teal. A gust of wind buffeted them sideways. Telgra looked up to see that the forest they had just left was surrounded by the white lace of a crashing shoreline. The butterfly, which no longer seemed as big as a horse, fought the wind and turned them into it.

The delicate insect carried them beyond the land. For a very long time only the glistening cobalt expanse of ocean spread out below them. Eventually a mass of land appeared to the south, an island. How big it was she couldn’t guess, for she had no true sense of how big or small she herself really was.

As they flew above she saw a dark thing take flight from a clearing in the black forest that covered most of this other island. From somewhere farther away she heard a howling scream. It was followed by the sound of sobbing. Over the menacing island, in a clearing, she saw a circular hole in the earth. Around it, men in robes of bright crimson danced and chanted. As the gusts carried her butterfly haphazardly over the hole she felt a powerful sense of fear. A horrible, rotten smell filled her nostrils and made her stomach roil. She chanced a look down into the depths and froze in terror. A great toothy maw came shooting upward. Behind yellowed teeth, demon-red eyes glowed so brightly that they seemed to outshine the sun. The butterfly tried to turn away, to evade the closing teeth of the fiend coming for them, but it couldn’t move fast enough.