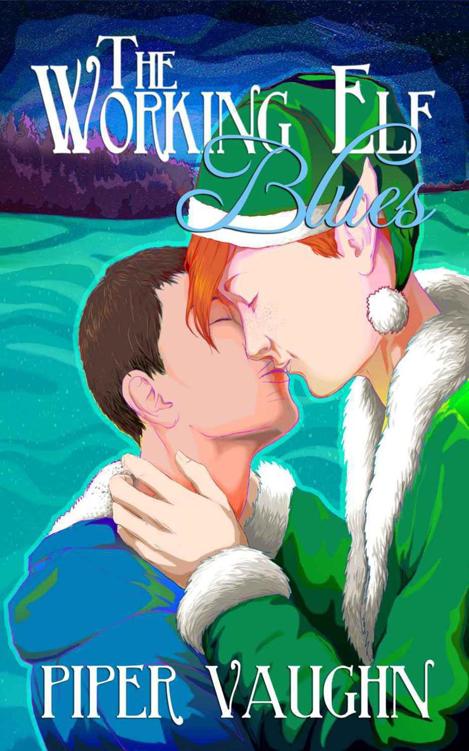 Garnet Evergreen has never heard of an elf abandoning the North Pole for a human, but he yearns to be the first. Ever since he saw Wes, the boy with sorrowful eyes, Garnet felt an undeniable kinship. Over the years, he's watched that boy grow into a man, and now he's determined to give Wes a Christmas he'll never forget. If only Garnet had thought to test his father's sleigh before leaving...

Orphaned as a child, Wes spends every Christmas alone at his cabin. When he's woken by a suspicious boom and finds a wrecked sleigh and an unconscious elf, he doesn't know how to react. Wes isn't fanciful. He doesn't give much credence to the stories about Santa Claus and flying reindeer. But a part of him wants desperately to believe when Garnet promises forever, even if life has taught him that no one ever stays...

This book is a work of fiction and all names, characters, places, and incidents are fictional or used fictitiously. Any resemblance to actual people, places, or events is coincidental.

For Z, with love.

And to my husband. If I could give you a gift like Garnet gave to Wes, I would.

It occurred to Garnet Evergreen, as he plummeted toward Earth, that perhaps fleeing the North Pole in his father's untested, fir-sap-fueled sleigh might not have been the best of ideas.

Wind and snow battered at his face, blinding him despite his ice-proof goggles. Even if his vision
had
been clear, he'd still have no idea where he was in relation to his destination. The navigation system was the first thing to go when fuel started running scarce. That was miles ago, and while he'd continued in what he assumed was the same direction, he had no way of knowing just how far off course the wind gusts might have driven him.

"By Santa's beard, I've done it this time!" Garnet shouted as the runners of the sleigh connected with the tops of a few towering trees. This would definitely be the greatest of all his screw-ups. He pulled hard on the yoke, hoping for one last surge of power to help ease his landing.

Garnet's heart raced with fear. He swallowed hard, but the lump in his throat didn't budge. Elf or not, he wasn't indestructible. These last few seconds might be his last. Pressing back against his seat, he tried to brace himself.

Impact. Pain in his chest, ringing in his ears, endless, swirling white. Then, finally, black.

Wes jerked awake as a distant
boom
sent his huskies into a barking frenzy. Bleary-eyed, he looked around, realizing he'd fallen asleep with his mug of cocoa half full, his TV dinner still in the microwave, and the DVD of
Miracle on 34th Street
frozen on the menu screen. He blinked and rubbed his hands over his face as Misha and Micah, two of his huskies, whined and pawed at the front door. Mordecai, another husky, sat alert by the fire, and Mabel, his only malamute, trampled his legs in her excitement.

From the windows nearby, he could see it was fully dark and light flurries had turned into a blizzard, the wind whipping hard through the trees. For a moment, he couldn't remember what had his dogs so unsettled.

Oh, right. The noise. He should probably go investigate. The remoteness of his cabin meant he rarely encountered anyone up here once winter settled in, but the occasional traveler wasn't outside the realm of possibility. In this weather, a car crash and lack of shelter would mean certain death for anyone left stranded. He couldn't ignore the sound on the off-chance that lives might be at stake.

Wes dragged himself off the couch, and still feeling groggy, made quick work of bundling up. Sweater, jacket, hat, boots, scarf. He'd already been wearing thermal underwear to ward off the chill that permeated the cabin despite the heat coming from the fireplace.

Next came his flashlight, tucked into his pocket for the time being, and the backpack he normally kept in the front closet. It contained a blanket, rope, a knife, heat packs, a flint striker, and a variety of other gear, including a few first-aid items. Last, he harnessed the dogs and then pulled on his gloves. The four of them were plenty strong enough to pull the sled with Wes and another person on board. This way, he could navigate the narrower trails through the trees. If needed, he could come back for his SUV later.

The door flew open as soon as he turned the knob, letting in a gust of bitterly cold wind and about a foot of snow. He swept as much of it back outside as he could while yanking the door shut behind him.

Once he'd rigged up the sled, he clicked his tongue and started the dogs in the direction of the road with a firm "Hike!" The noise from earlier might not have come from that way, but it seemed like the most logical place to start.

Half an hour later, a trail of broken tree branches led him to a scene Wes couldn't quite believe. The remains of what looked to be a sleigh lay scattered throughout the small clearing. There were no animals nearby, no sounds except the panting and nervous shifting of his dogs. Just boughs from damaged pines and the pieces of the sleigh strewn across the snow.

Struggling to process what he was seeing, Wes guided his own sled to the bulk of the debris, then commanded his dogs to stay while he pulled his flashlight from his pocket and moved closer to investigate.

The dogs whined as Wes kneeled beside an overturned section of the sleigh. The runners were mostly intact, so he grabbed onto one and used it to shift the piece onto its side. He gasped at what he found underneath.

A man lay unconscious against the snow, his skin deathly pale, tinged blue around his mouth. Yellow-tinted goggles covered his eyes and blood ran down his forehead and the right side of his face, marring his features. His breaths were so shallow, his chest barely moved.

Wes took stock of the rest of him, pausing only for a second to puzzle over the man's attire. He was wearing a fur-trimmed green jacket and thick pants of the same material. Red-and-white socks peeked out of the top of sturdy brown boots. He looked like a Christmas elf assisting the fake-bearded Santa at any mall in any American suburb this time of year. But even at a glance, Wes saw that the clothing was obviously high quality, not flimsy costume material. And the one ear Wes could see through the man's shock of bright auburn hair was even pointed like an elf's.

Wes stared. As if feeling the weight of his gaze, the ear twitched slightly.

"Jesus!" Wes scrambled to stop himself from falling backward onto his butt. He squinted through the falling snow, certain he'd imagined the movement. But no. As he scrutinized the pointy-tipped ear, it twitched yet again, like a cat's.

Okay.
Okay.
That was either one hell of a makeup job, or Wes had a real-live elf on his hands.

Wes shook his head hard. He couldn't think about that right now. No matter how surreal the situation seemed, this man's life was at risk. Wasting time was not an option.

Pressing his fingers under the man's jaw to the left of his windpipe, Wes found a faint, steady pulse. "Can you hear me?" he asked. "My name is Wes. I'm going to get you somewhere safe and warm."

Aside from a soft groan, the man didn't stir. Wes looked back toward his own sled and waiting dogs, assessing the situation. The guy would fit onto the cargo area of the sled without any issues, but fearing a neck or spinal injury, Wes hesitated to move him. What choice did he have, though? The cabin was miles from the closest hospital. Even in ideal conditions, the ride might take an hour. In a blizzard, that time could easily be tripled or more—
if
the roads leading down the mountain were passable. He might get them both killed by trying. The smarter decision would be to make the guy as comfortable as possible and wait the storm out.

Decided, Wes surveyed the rest of the area. He spotted a green Santa hat lying nearby. Wes grabbed it and shoved it into his sled bag before carefully lifting the man into his arms. He was compact, likely shorter than Wes by several inches, but he was heavier than he appeared, especially when trudging through deep, wet snow.

Fortunately, Wes didn't have very far to go. He situated the man on the sled, then dug the blanket from his backpack. Wes tucked it around him and pulled the scarf from his own neck to carefully wrap the man's head. Hoping the pressure would staunch the blood flow, he tied it as tight as he dared. The man groaned again but still didn't wake.

Once Wes had ensured everything was secure, he mounted the sled, setting off toward the cabin. An hour later, he had the man settled in the guest bedroom, the sled stored, and the dogs unharnessed. They sat watching him, tongues lolling, as he moved around the cabin, heating water and gathering his first aid supplies.

Micah pawed at the guestroom door, but Wes shooed him away before going inside. Carefully, he stripped off the man's clothing, checking for additional injuries as he worked. First, the goggles, then the jacket, pants, and the long-sleeved white shirt. The socks and red briefs looked dry, so he left those where they were. The boots he'd removed earlier, right after placing the man in bed.

Doing his best not to gawk at the lean body he'd revealed, Wes quickly dressed the man in one of his own heavy sweatshirts and matching sweatpants. He completed the outfit by slipping another pair of warm wool socks over his slender feet. That done, Wes set to tending his head wound.

It was only once Wes had washed some of the blood off, avoiding the ears aside from wiping the right one clean, that he finally got a really good look at the man's face—and felt a flash of recognition.

As he'd worked, the man's coloring had improved. Previously pale skin became creamy peach liberally smattered with cinnamon-colored freckles. His eyes still hadn't opened, but Wes didn't need to see them to know they were green. They'd met before, Christmas Eve, half a decade ago.

Back then, he hadn't been wearing an elf costume, just jeans, a winter jacket, and a beanie that covered his ears and hair. It had happened near Wes's cabin when Micah was a puppy, only a few months old. He'd gotten away from Wes and in his exuberance, tumbled down a steep incline. Wes was about to run back to the cabin for some rope when this man appeared—Garnet, he'd said, when Wes asked his name—with Micah cradled safely in his arms.

That wasn't the first time Wes saw him either. The previous occasion had been five years before that, when Wes was thirteen, the first Christmas after Wes's adoptive father, Mitch, had died. Garnet found him in the park, rocking on a bench, tears frozen on his face. He'd taken Wes to a diner nearby, plied him with hot cocoa and pie, and kept Wes company all night. Then in the morning, he was gone, apparently vanished into thin air as he had again that evening he rescued Micah.