Read The World at Night Online

The World at Night 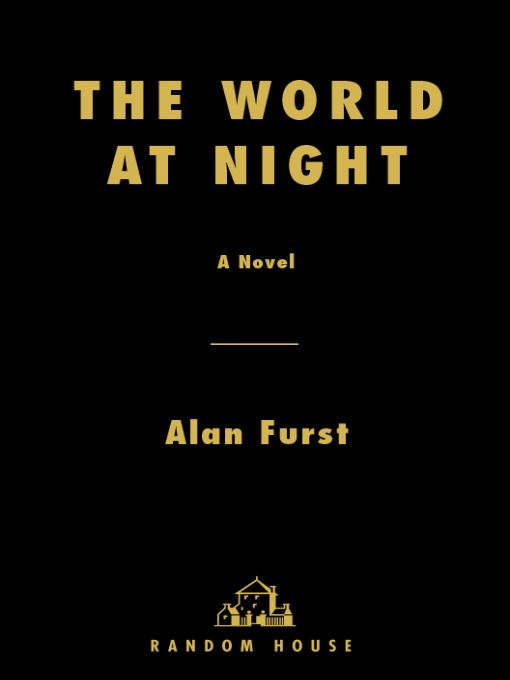 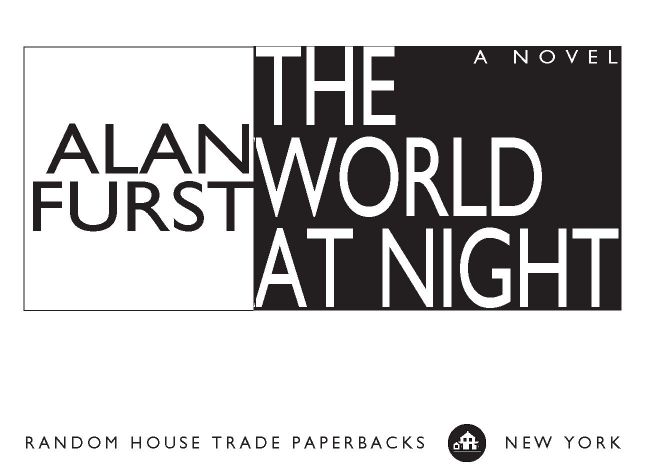 Praise for Alan Furst and
The
World at
Night

“Jean Casson is a reluctant and almost-accidental double agent, an ordinary man caught up in extraordinary circumstances. . . . Furst’s work is full of the kind of irony that is both universal and specifically French.”

“What is engaging [in
The World at Night
] is the idea of the unintentional secret agent, the amateur who has read Eric Ambler. . . . Casson is mystified and terrified as he is slowly sucked into the vortex. Occupied Paris is . . . skillfully reconstructed by Alan Furst, a writer of talent.”

“[
The
World at Night
] earns a comparison with the serious entertainments of Graham Greene and John le Carré. . . . [G]ripping, beautifully detailed . . . [A]n absorbing glimpse into the moral maze of espionage.”

“[
The
World at Night
] is the world of Eric Ambler, the pioneering British author of classic World War II espionage fiction. . . . The novel is full of keen dialogue and witty commentary. . . . [T]hrilling.”

“Alan Furst . . . has evoked [Paris] so vividly we can smell and taste the city and find our way around like natives. . . . Furst has written an elegant, suspenseful, and—there’s no other word for it—professional novel. Flaubert would have liked it. Balzac would have approved.”

“A wonderfully evocative portrait of wartime Paris and the moral maze of resistance that builds to a brilliant climax.”

“First-rate reading—vivid, compelling, and rich with authentic detail about clandestine battles and battlegrounds. No one evokes World War II behind the lines better than Alan Furst does.”

“[Furst’s] depictions of wartime Europe have the richness and complexity of the fiction of John le Carré and Somerset Maugham. . . . With the authority of solid research and a true fascination for his material, Mr. Furst makes idealism, heroism, and sacrifice believable and real.”

“Furst’s scrupulous attention to spycraft and period detail . . . evokes the mood of conquered cities like Warsaw, Paris, and Barcelona. . . . Language this lovely vaults the categories we lazily constrain literature with.”

“Some books you read. Others you live. They seep into your dreams and haunt your waking hours until eventually they seem the stuff of memory and experience. Such are the novels of Alan Furst, who uses the shadowy world of espionage to illuminate history and politics with a gripping immediacy.”

“Imagine discovering an unscreened espionage thriller from the late 1930s, a classic black-and-white movie that captures the murky allegiances and moral ambiguities of Europe on the brink of war. . . . Nothing can be like watching
Casablanca
for the first time, but Furst comes closer than anyone has in years.”

“Furst has somehow discovered the perfect venue for uniting the European literary tragedy with the Anglo-American spy thriller. Nobody does it better.” 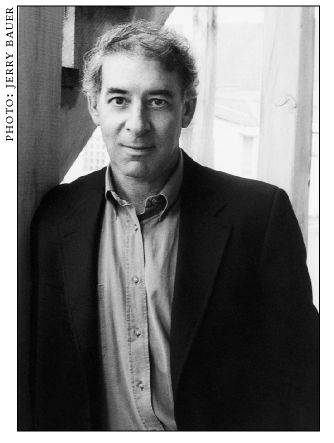 ALAN FURST is widely recognized as the master of the historical spy novel. He is the author of
Night Soldiers, Dark Star, The Polish Officer, Red
Gold, Kingdom of Shadows, Blood of Victory,
Dark Voyage,
and
The Foreign Correspondent.
Born in New York, he has lived for long periods in France, especially in Paris. He now lives on Long Island, New York.

The boat left the Quai de la Joliette in Marseilles harbour about midnight. It was new moon and the stars were bright and their light hard. The coast with its long garlands of gas lamps faded slowly away. The lighthouses emerging from the black water, with their green and red eyes, were the last outposts of France, sleeping under the stars in her enormous, dishonored nakedness, humiliated, wretched and beloved.

Long before dawn, Wehrmacht commando units came out of the forest on the Belgian border, overran the frontier posts, and killed the customs officers. Glider troops set the forts ablaze, black smoke rolling over the canals and the spring fields. On some roads the bridges were down, but German combat engineers brought up pontoon spans, and by first light the tanks and armored cars were moving again. Heading southwest, to force the river Meuse, to conquer France.

In Paris, the film producer Jean Casson was asleep. His assistant, Gabriella Vico, tried to wake him up by touching his cheek. They’d shared a bottle of champagne, made love all night, then fallen dead asleep just before dawn. “Are you awake?” she whispered.

“The radio.” She put a hand on his arm in a way that meant there was something wrong.

What? The radio broken? Would she wake him up for that? It had been left on all night, now it buzzed, overheated. He could just barely hear the voice of the announcer. No, not an announcer. Perhaps an engineer—somebody who happened to be at the station when news came in was reading it as best he could:

“Into the Netherlands. And Belgium. By columns that reached back a hundred miles into Germany.”

More silence. Casson could hear the teletype clattering away in the studio. He leaned close to the radio. The man reading the news tried to clear his throat discreetly. A paper rattled.

The teleprinter stopped. A moment of dead air. Then it started up again.

“It is the position of the government that this aggression is an intolerable violation of Belgian neutrality.”

Gabriella and Casson stared at each other. They were hardly more than strangers. This was an office romance, something that had simmered and simmered,
and then, one night.
But the coming of war turned out to be, somehow, intimate, like Christmas, and that was a surprise to both of them. Casson could see how pale she was. Would she cry? He really didn’t know very much about her. Young, and slim, and Italian—well, Milanese. Long hair, long legs. What was she— twenty-six? Twenty-seven? He’d always thought that she fitted into her life like a cat, never off balance. Now she’d been caught out—here it was
war,
and she was smelly and sticky, still half-drunk, with breath like a dragon.

She nodded that she was.

He went looking for a cigarette, probing an empty packet of Gitanes on the night table. “I have some,” she said, glad for something to do. She rolled off the bed and went into the living room.
Merde,
Casson said to himself. War was the last thing he needed. Hitler had taken Austria, Czechoslovakia, then Poland. France had declared war, but it meant nothing. Germany and France couldn’t fight again, they’d just done that—ten million dead, not much else accomplished. It was simply not, everybody agreed,
logique.

Gabriella returned, lit a cigarette and handed it to him. “May I take a bath?” she asked.

“Of course. There are towels—”

Casson found his watch on the night table. 5:22. Water splashed into the bathtub. The tenant on the floor below was a baroness—she didn’t like noise. Well, too bad. She already hated him anyhow.

He got out of bed, walked to the glass door that opened on the little balcony. He pushed the drape aside; you could see the Eiffel Tower across the river. The rue Chardin was quiet—the 16th Arrondissement was always quiet, and Passy, its heart and soul, quieter still. One or two lights on, people didn’t know yet. So beautiful, his street. Trees in clouds of white blossom, dawn shadow playing on the stone buildings, a lovely gloom. He’d shot a scene from
No Way Out
here. The hero knows the cops are onto him, but he leaves his hideout anyhow, to see his rich girlfriend one last time.

It was his wife. They had been separated for years, living their own lives in their own apartments. But they remained married, and shared a set of old friends.

Fight,
he thought. Support the troops, hold rallies, you had to—

“About tonight, I mean.”

Now he understood. They were giving a dinner party at her apartment. “Well, I don’t see how, I mean, it’s war.”

“Bruno says we must go on. We must not give in to Hitler.”

Bruno was Marie-Claire’s boyfriend. He owned an agency that sold British motorcars, had his hair cut twice a week, and spent a fortune on silk dressing gowns.

“And the cake has been ordered.” The twentieth wedding anniversary of the Langlades—a cake from Ponthieu.

“All right. Let’s go ahead. Really, what else is there to do?”

“Are you going to the office?”

“Can you telephone later on?”

He hung up. The door to the bathroom was half-open, the water had stopped. Casson paused at the threshold.

“You can come in,” Gabriella said.