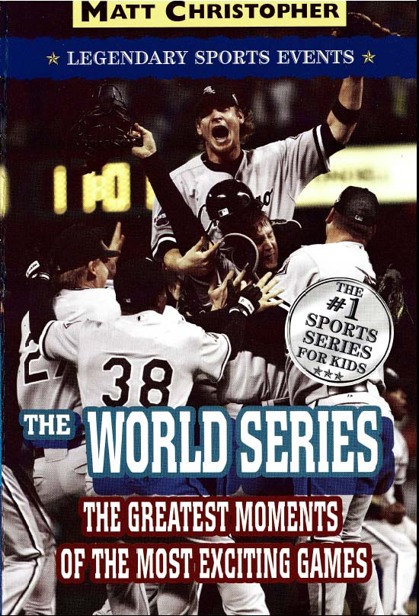 All rights reserved. Except as permitted under the U.S. Copyright Act of 1976, no
part of this publication may be reproduced,
distributed, or transmitted in any form or
by any means, or stored in a database or retrieval system, without the prior written
permission of the publisher.

Matt Christopher
®
is a registered trademark of

Introduction:
The Road to the First World Series

Ask baseball fans when their favorite sport was born, and you're likely to get several different answers.

“Alexander J. Cartwright wrote down the first official rules for baseball in 1845,” one may say, “and on June 19, 1846, his
team, the New York Knickerbockers, played a game by those rules. Since we still follow most of those rules today, that was
the first real baseball game.”

“But in 1839 in Cooperstown, New York, Abner Doubleday drew a huge diamond in the dirt and put a base down in each corner,”
another might counter. “That's why it's called
baseball
and why the Baseball Hall of Fame is in Cooperstown.”

“The word
baseball
was used long before 1839,” a third might object. “A document written in 1791
warns people not to play baseball within 80 yards of the new Pittsfield, Massachusetts, Meeting House. The town was afraid
someone would hit a ball through the house's windows!”

“But the game itself was around even earlier than that,” a fourth will add. “When George Washington was at Valley Forge during
the Revolutionary War, he played an English version of baseball called rounders.”

The truth is that modern baseball has no single birthday. It evolved from similar games that used bats and balls and involved
running, pitching, throwing, and catching.

What is known, however, is when and how
professional
baseball began. The first baseball team made up entirely of paid athletes, the Cincinnati Red Stockings, was formed in 1869.
That team won 56 straight games before being defeated by the amateur Brooklyn Athletics on June 14, 1870.

The Red Stockings' amazing success convinced others to create teams of paid players. On March 17, 1871, nine of these teams
were organized into the National Association of Professional Baseball Players (NA). This league lasted only four years before
gambling, scandal, and infighting caused it to fold. But on February 2, 1876, a new professional association, the National
League (NL), was created.

The NL was a much stronger organization than the NA had been — so strong, in fact, that in 1882, owners of teams that were
not
in the league decided to form a rival
,
organization, the American Association (AA).

The competition between the two leagues was instantaneous and fierce, and at the end of the 1882 season, it came to a head.
That September, the NL's number-one squad, the Chicago White Stockings, agreed to play a series of exhibition games against
the AA's top team, the Cincinnati Reds. Considered by many to be the first true World Series, the event ended in a tie at
one game apiece.

Although there was no rematch in 1883, the two leagues met again in 1884 and continued to meet in the postseason until the
AA shuttered its doors at the end of the 1891 season due to financial difficulties.

The NL was not going to be without a rival for long, however. In 1892, sportswriter Byron Bancroft “Ban” Johnson and Reds
manager Charlie Comiskey set out to turn a minor baseball organization, the
Western League, into a major-league powerhouse. It took ten years, but by early December 1902, the new organization, the American
League, had grown just as strong and as popular as the National League. NL team owners had no choice but to recognize the
AL as a major league.

The AL began its first official season in April 1903. By August, one team, the Boston Red Sox (or Pilgrims or Americans, as
they were sometimes called), had emerged as the league's standout team. Meanwhile the Pittsburgh Pirates of the NL came out
on top for the third season in a row. That same month the Pirates' owner, Barney Dreyfuss, challenged owner Henry Killilea
and his Boston squad to a best-of-nine series to determine which team was stronger.

And with that challenge, the World Series was born.

The 1903 World Series opened on Thursday, October 1, at the Huntington Avenue Baseball Grounds in Boston. Admission cost fifty
cents for bleachers or standing room, a dollar for grandstand seats. Spectators near the outfield stood behind ropes.

Warming up were some of baseball's greats, including Pittsburgh's shortstop Honus Wagner and Boston's star pitcher Denton
True “Cy” Young. At three o'clock sharp, Young took to the mound. The thirty-six-year-old righty — whose nickname “Cy” was
short for “cyclone,” after the damage his fast-ball had once done to some wooden stands — had been playing professional baseball
for thirteen years. That season, he had a record of 28 wins, including 7 shutouts and 9 losses, for an earned run average
(ERA) of 2.08. His batting average of .321 was just as impressive.

Leading off for the Pirates was Ginger Beaumont. Beaumont was the National League's batting champ that year, with more than
200 hits for the season. This at bat, however, the redheaded slugger sent a fly ball to center field for out number one.

Then Fred Clarke popped up a foul ball. Catcher Lou Criger got under it for the second out. Boston needed just one more to
retire the side.

But that last out was a long time coming. First Tommy Leach clocked a ground-rule triple into the roped-off area of the outfield.
Then Wagner smashed a single to left. Leach crossed home plate, and the Pirates were on the board.

Things went steadily downhill for Boston after that.

With Kitty Bransfield at the plate, Wagner stole second. Then Bransfield connected on a pitch. The ball bounced along the
ground toward second baseman Hobe Ferris. It looked like a sure out — until Ferris fumbled the ball!

Bransfield was safe at first and Wagner advanced to third on the error. Then, as Young threw in the
next pitch to batter Claude Ritchey, Bransfield took off for second.

The catcher nabbed the ball, jumped up, and hurled it toward second. The throw was wild! Bransfield bolted for third, and
Wagner charged home for the Pirates' second run.

Young walked Ritchey to put runners at first and third. Jimmy Sebring came to bat; and as Young threw in the pitch, Ritchey
stole second. Moments later, Sebring pounded out a solid single. Bransfield and Ritchey raced home, and the score jumped to
4–0 with one out yet to go!

That out seemed in the bag when the next batter, Ed Phelps, missed the pitch for his third strike. But Criger, usually so
reliable, flubbed the catch! Phelps made it safely to first on the drop-third-strike rule. Luckily for the Red Sox, Young
struck out Deacon Phillippe to finally end the inning.

The teams switched sides, and Red Sox Patsy Dougherty came to the plate. He struck out. The second hitter, Jimmy Collins,
did the same. Chick Stahl managed to single to left, but he died on first when cleanup man Buck Freeman flied out to right.

Neither team scored in the second inning, but in
the third, the Pirates sweetened their lead by one on a single by Sebring that scored Bransfield. They added two more runs
by the seventh inning; the second was the World Series' first home run, hit off of Sebring's talking bat.

With the score 7–0, a Pirates victory seemed all but certain. But Boston wasn't beaten yet. At the bottom of the seventh,
Buck Freeman led off with a solid triple to right field. Freddy Parent followed with a triple of his own, scoring Freeman,
and then crossed home plate himself on a sacrifice fly by Candy Lachance. The inning ended soon after that, but the Sox were
finally on the scoreboard.

Boston added one more run in the ninth inning. But in the end, those three runs weren't enough. The Pirates won the first
ever World Series game, 7–3.

Game two found Red Sox pitcher Bill Dinneen on the mound. He struck out the first batter. Eight and a half innings later,
he'd struck out ten more and given up only three hits. Boston walked away with a 3–0 win — and the first World Series shutout
— to tie the Series at one game apiece.

The next day, however, it was the Pirates' star pitcher, Deacon Phillippe, who led the charge, giving Pittsburgh a 4–2 victory
over Boston. Phillippe pitched again in game four, the first played in Pittsburgh, and again, he was in top form, holding
the Sox to just one run for the first eight innings. The Pirates, meanwhile, chalked up five.

Boston managed to push across three runs in the ninth and came very close to winning the game and tying the Series. But they
didn't. Final score, 5–4 Pirates.

There were five games yet to be played in the best-of-nine series. The championship was still up for grabs.

The next game was scoreless through the fifth inning. Then, in the top of the sixth, the Red Sox loaded the bases. Pitcher
William “Brickyard” Kennedy then handed Boston its first run by walking the next batter. Another run was scored when Wagner
made a wild throw to first. Criger bunted in a third run, and two more runners crossed home plate when Young blasted a triple
into the crowds in left field. When Dougherty also lambasted a triple, Young made it
home. In a single inning, the score had gone from 0–0 to 6–0!

By the bottom of the ninth inning, the Red Sox had added five more, while the Pirates had posted a mere two runs for a final
score of 11–2. The next day's game saw the Pirates falling again, this time 6–3. The Series was now tied at three games apiece.

The Unknown Mistress - An Erotica and Romance Paranormal/Historical Novella by Mayfair, Dorian
Every Sunset Forever by Butler, R. E.
Black Dawn by Cristin Harber
Angel by Katie Price
The Return by Roberto Bolaño
The Soul Collector by Paul Johnston
01 - Memories of the Dead by Evelyn James
The One That Got Away by Carol Rosenfeld
Falling Star by Robert Rayner
Thornbear (Book 1) by MIchael G. Manning