Read The Zombie Virus (Book 2): The Children of the Damned Online

The Zombie Virus (Book 2): The Children of the Damned 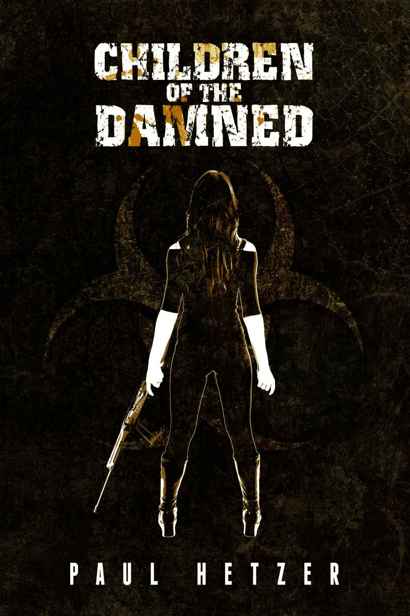 Children of the Damned (The Zombie Virus 2)
copyright © 2014

This
book
is
a
work
of
fiction
.
People
,
places
,
events
,
and
situations
are
the
product
of
the
author’s
imagination
.
Any
resemblance
to
actual
persons
,
living
or
dead
,
or
historical
events
,
is
purely
coincidental
.

No
part
of
this
book
may
be
reproduced
,
stored
in
a
retrieval
system
,
or
transmitted
by
any
means
without
the
written
permission
of
the
author
and
publisher
.

Joseph R. Labrosse II 1SG US ARMY for helping
me keep the areas of the story where his expertise is relevant as
realistic as possible,

My wife for her patience and support,

Angela Reese for her wonderful help with the
manuscript.

The creature peered out from the thick underbrush at
its prey while the steamy vapor of its silent breath wrapped misty
white tendrils around the thick mass of dark hair on its head. Its
blood-red eyes followed every movement through the brightly colored
fall foliage that shrouded it from the view of the animal in the
clearing. Hunger gnawed painfully at its belly, driving the
uncontrollable rage that coursed through its body to a nearly
unbearable level.

Pickings had been slim lately and it was only
luck that it had stumbled onto the edge of this clearing that held
the promise of filling that painful void in its stomach. In the
past weeks it had fed on an eclectic diet ranging from insects to
snakes, and to even a creature such as the one sitting by a fire in
the clearing before it. To an animal living on the edge of
starvation, everything that slithered, walked, or crawled was
potential sustenance. Unlike other creatures that killed only for
survival, the all-consuming hate that burned within its brain
forced it to kill to quench that murderous rage, however
temporary.

It quietly swatted at a swarm of bothersome
gnats that clouded around its filthy, hair-covered face. Hunger and
the interminable pain that filled its head were its only realities
anymore; that, coupled with an unrecognized but inherent drive to
remain a member of its pack on which it sometimes depended for its
survival was a part of its relatively simple, uncomplicated
existence. At one point in its past, it, like the rest of its pack
mates, had been domesticated, even though the part of its brain
that allowed for that existence had been devastated. Now it and its
companions were as feral, if not more so, than any animal living in
the wilds. With little reasoning skills, only instinct drove its
actions.

Instinctively, it knew that it had to find
nourishment, both for itself and the pregnant female that was part
of its pack. It felt no sense of love or responsibility to the
female it had impregnated, just some basic impulse that drove it to
provide food for her while she convalesced. In fact it did not
understand that she was pregnant with his offspring, or even the
concept of pregnancy. Most of its reasoning and thinking ability
had been nearly wiped out, nearly.

Ghost images of times past still haunted its
ravaged mind, images in which it had no concept of their meaning.
Its day to day activities were mostly driven by its body’s base
needs, controlled by instinctive urges which had been inherent
though suppressed in its species for eons immeasurable.

However, it was learning. A kind of
equilibrium had been reached in its brain with the virus that had
originally decimated that complicated organ, and parts had begun to
heal. Lost functions had been rerouted to other viable sections of
the brain that the infection had not touched. In the regenerated
tissue, new memories were being stored and some basic reasoning
skills learned and retained. It would never be what it was. It was
becoming something different, something new.

That was how it had learned how to hunt this
prey that looked so much like its own kind, although it didn’t have
the familiar scent that itself, and others like it, emitted. He and
his pack had hunted these creatures before, and each time retained
some of the knowledge of those previous hunts to use whenever an
opportunity such as this presented itself.

It perceived something analogous to an
extreme hatred toward the creature it was stalking, as it did
toward any living creature that was not its own kind. It didn’t
know why or even have the intelligence to construct such a
question. It simply felt an overpowering rage whenever it came
close to one of them that drove it to want to destroy them at all
costs. That, along with the hunger twisting its guts into painful
knots, destined its actions this night. Only the fire caused it to
hesitate as some primordial fear held its need to kill in check.
Yet it was also drawn to it, like a moth to a flame. Some memory
persisted of the comforting heat that was associated with the
crackling yellow-orange tendrils of plasma that danced along the
glowing wood. Unlike many others of its kind, it had developed the
ability to override the maddening impulse that had previously
forced it to attack and kill these hated creatures on sight. So it
now had the ability to unconsciously fight the rage that
incessantly urged it to blindly leap forth and kill.

One other thing it had learned about a
successful hunt was patience.

Jeremy McQuinn threw the twigs and branches
he had gathered from around the clearing on the burning pile of the
fire a few feet from the softly gurgling stream. He wanted to have
the fire roaring before the light faded completely and the chill of
the autumn night descended heavily onto this mountainous slope deep
in the Blue Ridge chain. His heavy pack lay canted against an old
fallen tree where he had dumped it after stumbling exhausted into
the clearing next to the brook. He had left the highway less than
an hour ago looking for a safe place to camp. It had been days
since his last encounter with a Loony. However, he knew that
staying too close to the highway was an invitation for those
unwanted guests to appear.

He kept his Sig P556 AR pistol slung tight to
his chest, a Springfield XDM 9mm handgun on his hip, while the
suppressed Sig Mosquito .22 pistol was always in his hip pouch. He
had learned hard lessons about letting his firearms get too far
from his reach. What was a ten year old kid to do when the monsters
from his nightmares ended up becoming a reality? For Jeremy, his
options were to curl up in a ball and hide his head in his hands,
or buck up and deal with the fears, and then deal with the
monsters. One other thing he had learned, when you’re up against a
determined enemy, you can never have too much firepower.

It had been over three weeks since he had
learned that lesson while he had been sleeping in an abandoned
trailer east of the city of Charlottesville, Virginia. He had
relied on his knowledge that the Loonies also slept at night to
keep him safe from any encounters with the creatures while he slept
in an old musty bed he had found in the small bedroom of the
ramshackle trailer. Its sheets had been thrown back as if the owner
had only left that morning. He had tossed his pack and firearms on
the couch in the living room after carefully entering through the
front door, then wearily made his way down the carpeted hall to the
musty smelling bedroom. Once there he had collapsed fully clothed
onto the lumpy mattress and fallen immediately into a deep,
exhausted sleep.

He remembered dreaming about being in his
grade school classroom with his best friend Sean. Sean’s
cherub-like face smiled at him while he stuck a large bore straw
between his puckered lips. They were having a spitball fight with a
couple of other boys before the teacher showed to start the morning
class. The fight was interrupted by his teacher, Miss Margel, and
several others of the school staff banging on the classroom windows
and snarling madly at them. The teachers’ eyes had glowed with a
bright red light as if a hot flame burned deep within their skulls.
An arm had suddenly burst through the window in a shower of glass
and grabbed him violently by the front of his shirt. He was
viciously yanked toward one of their large gaping, tooth-filled
jaws. He screamed in his dream and awoke struggling with the sheets
and covered in sweat. The dream seemed to follow him into his
waking awareness. There was a banging on the aluminum of the
trailer around the bedroom window. He stared out the dark window
and saw the darker shadow of a face peering through the screen back
at him. He really did scream that time and the creature he called a
‘Loony’ slammed its fist through the screen, sending the entire
fixture careening into the bedroom. Other growls and snarls could
be heard behind the one that was rapidly pulling itself through the
open window.