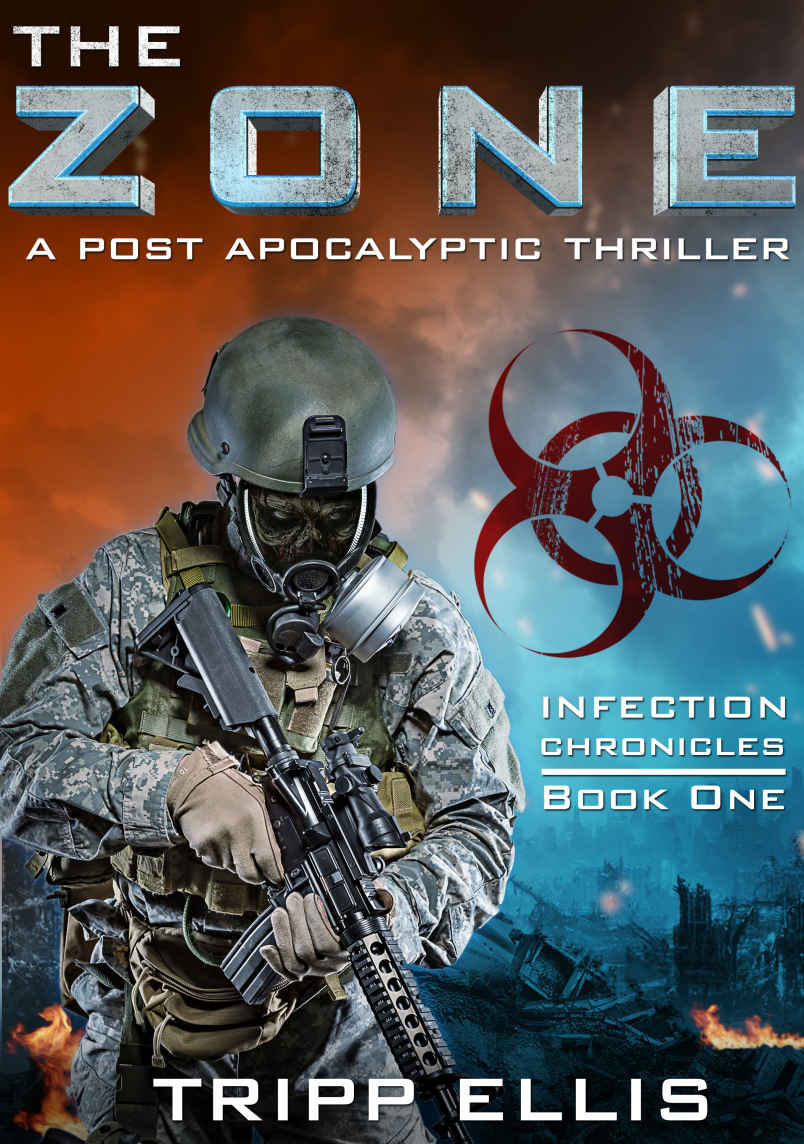 Join the
newsletter
to get exclusive updates!

This book is a work of fiction. The names, characters, places, and incidents, except for incidental references to public figures, products, or services, are fictitious. Any resemblance to persons, living or dead, actual events, locales, or organizations is entirely coincidental, and not intended to refer to any living person or to disparage any company’s products or services. Every character referenced is over eighteen.

All rights reserved. Worldwide.
No part of this text may be reproduced, transmitted, downloaded, decompiled, uploaded, or stored in or introduced into any information storage and retrieval system, in any form or by any means, whether electronic or mechanical, now known or hereafter devised, without the express written permission of the publisher except for the use of brief quotations in a book review
.

NOTHING GETS IN or out.

Major Jack Steele just wanted to go home. His cold, blue eyes surveyed the ruins of the city. They were eyes that had seen too much of the horrors of war. But this war was different. The enemy wasn’t some foreign invader. Some nameless, faceless being. This battle was held on home soil. And the enemies were Americans. At least, at one point, they were.

Steele’s face was lined, and scarred from years of battle—half flesh, half titanium alloy. Taken apart and put back together a dozen times over the years from whatever scraps the army medics had on hand. A bio-mechanical soldier. One of the country’s finest.

Z Day. March 18th, 2037. An infection of unknown origin ravaged the city. Marshall law was enacted, and a quarantine zone was established. Four million civilians were infected, or killed, during
Operation Urban Thunder
. The mission objective was to isolate the virus. A containment wall was built, enclosing the perimeter. Unofficially, thousands of civilians remained within the zone, struggling to survive. Officially, there were no survivors.

Surface mines would rip apart anything that came within a ten foot radius. They were programmed to detect micro-vibrations consistent with ground targets. The grunts called them urchin mines. About the size of a tennis ball, with hundreds of sensor prongs. They were scattered everywhere within the containment zone. Black orbs of death. Sometimes they ended up in places where they shouldn’t. Steele knew this first hand. The mines were supposed to distinguish friend from foe. But technology doesn’t always work the way it’s supposed to.

What was left of the city was a shell of its former self. A pile of rubble, concrete, and rebar. Steele stood atop the containment wall, looking out over the destruction. This is what he did, day in and day out. His job was to keep what’s on the inside from getting out.

Steele’s eyes narrowed. Several hundred yards within the containment zone, a man emerged from behind a pile of rubble. The man staggered into the street, listing like a drunkard. He slowly weaved his way toward the containment wall.

Sergeant Kim Parker took aim. The barrel of her RK 709 carbine poked through the sharp razor-wire that lined the rim of the containment wall. She flipped off the safety and leaned into the stock of the rifle. She squinted one eye and tracked the man in her crosshairs with the other as he weaved from curb to curb.

Major Steele’s eyes flicked from the man to Parker, then back again. He watched her like a proud parent, anticipating the shot. An almost imperceptible smirk curled up on his lips. Parker was a good shot, and Steele was rooting for her.

She was a fiery redhead, with creamy skin and green eyes. The kind of girl who could have skated through life on her looks, but had no intention of doing so. What she was doing in the Army was anyone’s guess. Maybe she had something to prove to someone? She was a damn good soldier. Like all redheads, not someone you want to get on the wrong side of.

Parker took a deep breath and held it—the crosshairs dead center on the man’s forehead.  She steadied herself and squeezed the trigger.

The shot rang out, echoing across what was left of the brick buildings. A millisecond later, the man’s head exploded. Dark blood sprayed out like a firework exploding. It was like black sludge. The man dropped to his knees, then smacked the ground. His body twitched for the next minute.

Major Jack Steele smiled. It was something he didn’t do very often.

Specialist Bobby Ray Delroy slapped a five dollar bill down on the edge of the concrete containment wall. “Luck,”  he said, bitterly.

“No such thing,” Parker said. She smiled as she snatched the bill and stuffed it in her pocket.

Delroy was a wide-eyed southern boy, and had the twang in his voice to prove it. He was maybe 20 years old. He loved fast cars, fast women, and cheap sour mash whiskey. The only thing he hated worse than losing, was losing to a woman. And Parker was taking him to school.

The dead man in the street finally stopped twitching. If you could call him a man. He was one of the infected. A subtle distinction that would quickly separate you from humanity in the eyes of just about everyone.

Steele loved his soldiers, and they loved him. He let them indulge in these little activities to keep morale high. Even though gambling was strictly against company policy. After all, they were just doing their job. Might as well have a little fun while doing it. And this was a company affair. The Army had been privatized and the corporations took over. A privatized national defense force was a way around the Posse Comitatus Act. It let the federal government deploy troops on American soil without congressional approval. Which wasn’t always a good thing.

Another infected man rounded the corner from McKee Street. It was like this all day long. Nameless, faceless zombies roaming the wasteland. Everyone in the containment zone was fair game. Whether they were infected, or not.

Delroy drew a bead on the new guy. It was his turn. He lined up the staggering figure in his sights. Click. The safety went off. His heart was pounding. Delroy took a deep breath, then squeezed the trigger.

The bullet ripped through the air. It sounded hollow. Then it pinged off the concrete, and ricocheted away. It didn’t have that dull thump a bullet has when it hits flesh.

Parker lifted an unsympathetic eyebrow at him.

Delroy slapped another five bucks on the wall. “The sight’s off.”

Parker snatched Delroy’s weapon from his hands. She brought it to her shoulder, and lined up the infected in her crosshairs. Her finger squeezed the trigger.

The infected’s head exploded. Dark blood splattered. Its lifeless body crashed to the ground. There was nothing wrong with the weapon’s sights. Parker just proved it. She handed him back the weapon, and held her palm out.

She rubbed her fingers together.

“A headshot before the telephone pole. Fair and square. Miss or make—five dollars.”

“Delroy, you ain’t got no mojo.” Coming from a girl as fine as Parker, that had to hurt.

“Pay her. A bet’s a bet,” Steele said. His tone was absolute and final.

Parker leaned over the edge, watching it float down.

“Go get it,” Delroy said, snidely.

“What’s the matter, you afraid?”

As they bickered, another infected man staggered into the street.

“This one’s mine,” Delroy said.

But this one was different. It didn’t have the mindless gate of the others. It didn’t have a sickly color. It had more purpose. Delroy lined the man up in his sights and gripped the trigger.

It was hard to hear from such a distance. But it sounded like the thing stumbling toward the containment wall said, “Don’t shoot.”

Steele looked through his binoculars. Well, I’ll be damned, he thought. That
is
a person.

The refugee’s head split open. Brains sprayed out on the concrete. Bright red blood oozed. The refugee plummeted to the ground. His body lay lifeless. Delroy held out his hand, a shit eating grin across his face. “Nothing gets in or out, right?”

“THIS IS FUCKING bullshit,” Cassy said.

A blinding light shined in Cassy’s crystal blue eyes. They narrowed, taking a moment to adjust.

“Don’t do it,” the cameraman said.

“Just try to keep it in focus this time. Can you do that for me, Liam?”

The cameraman teetered his rig on his shoulder and racked focus on the lens. It was dusk now, and the sky was midnight blue. Soon it would be pitch black.

Cassy Williams was a perky blond, with shoulder length hair, full lips, and legs for days. She started out as the KXNAC weather girl, but she didn’t stay just a weather girl for long. Behind those deep blue eyes was an even deeper reservoir of ambition. Now she was one of the leading investigative journalists. What Cassy wants, Cassy gets.

She stood at the base of the containment wall, on the command side. The reporters had been cordoned off into a small section adjacent to the base camp. They weren’t allowed atop the containment wall. There was a no-fly zone over the city. And they certainly weren’t allowed inside. Special Operations Command, which affectionately became known as Z-SOC among the troops, had no intention of letting the media turn this into a circus. But Cassy sure was going to try.

“Keep it upbeat and positive, or we’re going to get kicked out of the press pool.”

“Look at what they did.” Cassy held up a copy of her script. Half of it had been crossed out with a thick black marker. Everything the pool reporters did had to go through Z-SOC clearance first. Anything that remotely disparaged the operation got redacted. “National security, my ass.”

“Speed,” Liam replied. It was old lingo from the days of videotape to indicate the camera was rolling and up to speed.

Cassy counted down the intro, “In three, two…” She gave a silent count for one.

“Spirits are high as
Operation Urban Thunder
moves into phase 2.” Cassy boomed the words with a smile. “With the infection isolated within the quarantine zone, officials are confident that American's can rest assured that the spread of the virus has been halted.” Then she paused a moment. The bubbly remnants of the former weather girl faded and pure pit bull emerged.

Holding Their Own XI: Hearts and Minds by Joe Nobody
Maid of Dishonor by Heidi Rice
A Baby of Convenience by Lena Skye
Uncharted (Unexpected Book 3) by Claudia Burgoa
True Perfection [Aspire 2] (Siren Publishing Ménage Amour) by Allyson Young
Beloved Stranger by Patricia Potter
The Dragon’s Path by Abraham, Daniel
The Basement by Leather, Stephen
If I Could Be With You by Hardesty, Mary Mamie
Tunnel in the Sky by Robert A. Heinlein