Read Then We Die Online 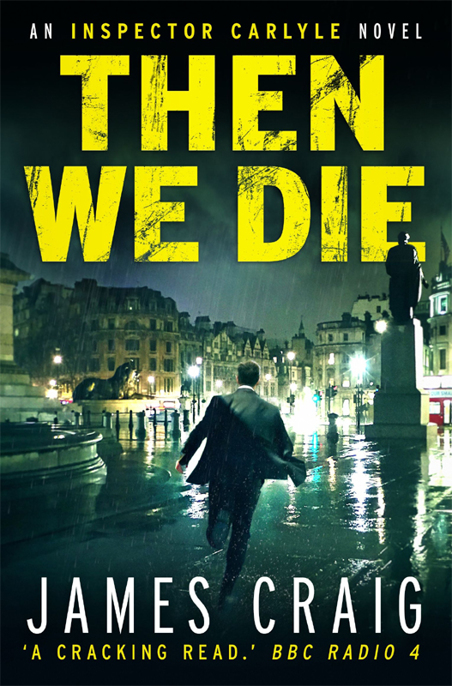 James Craig
has worked as a journalist and consultant for more than thirty years. He lives in Central London with his family. His previous Inspector Carlyle novels,
London Calling
,
Never Apologise
,
Never Explain
,
Buckingham Palace Blues
and
The Circus
are also available from Constable & Robinson. The novellas
The Enemy Within
and
What Dies Inside
are available on Kindle.

‘Fast-paced and very easy to get quickly lost in’ Lovereading.com

‘Pacy and entertaining’
The Times

‘
Never Apologise, Never Explain
is as close as you can get to the heartbeat of London. It may even cause palpitations when reading’
It’s a Crime!
reviews

The right of James Craig to be identified as the author of this work has been asserted by him in accordance with the Copyright, Designs & Patents Act 1988

This is the fifth John Carlyle novel, and thanks for getting it over the line go to: Polly James, Gillian McNeill, Paul Ridley, Michael Doggart, Luke Speed and Peter Lavery, as well as to Mary Dubberly and all the staff at Waterstones in Covent Garden.

Particular mention has to go to Chris McVeigh and Beth McFarland at 451 for all their help in promoting John Carlyle online, and to Donald Leggatt and Anthony Willis at Wildflower for producing the video promos for the series.

I also thank Richard Lewis, Simon Beckett, Ryszard Bublik, Michael Webster and William Baldwin-Charles for their enthusiasm and encouragement, without which this latest effort might well not have seen the light of day.

Of course, nothing would have come of any of this without the efforts of Krystyna Green, Rob Nichols, Martin Palmer, Colette Whitehouse, Saskia Angenent, Joan Deitch, Clive Hebard and all of the team at Constable.

I should add a particular thanks to my parents for helping me get this far. They didn’t get me to London, but they set me on the right road. This year they celebrate fifty years of marriage, which makes me smile, particularly given the storyline in this book!

As always, the greatest thanks are reserved for Catherine and Cate. This book, like all the others, is for them.

Death never takes the wise man by surprise. He is always ready to go.

Plucking a French Fancy from the three-tiered cake stand, Carlyle carefully nibbled at the pink icing skin before attacking the exposed sponge underneath.

She shot him a sharp look, knowing that he wanted to ignore the subject at hand and was simply playing for time in the hope that it would go away of its own accord. ‘John . . .’

‘Mm.’ With his free hand Carlyle pulled at the collar of his shirt, wondering what was coming next. The hotel’s formal dress code required him to wear a jacket and tie and he had felt somewhat uncomfortable even before the conversation had changed tack. Fumbling with the top button of his shirt, he tried to think of something to say, but nothing sprang to mind. The only thing he knew was that he really didn’t want to talk about his dad.

Not with his mum, anyway.

Refusing to make eye-contact, he played for time by scrutinizing a sculptured female figure crafted in gilded lead, flanked by a pair of floor-to-ceiling mirrors. Tea at the Ritz with his mother always felt a little surreal. God knows why she liked it so. The whole place looked like a Gianni Versace wet dream.

Afternoon tea had been a special treat for almost twenty years now, something that they had first stumbled upon by accident. Like the Changing of the Guard at Buckingham Palace or a trip to the Tower of London, it wasn’t the kind of thing you thought of doing if you ever actually lived in the city. However, he had brought his mother here for her birthday one year, and thereafter it had become an annual event. It was the one occasion during the year when they did something together as mother and son. It had thus taken on a kind of timeless quality that allowed both of them the pretence that their relationship was immutable.

Located at number 150 Piccadilly, César Ritz’s hotel had first opened in 1906. The only hotel awarded a Royal Warrant by HRH The Prince of Wales for services to Banqueting and Catering, it was a London landmark, a staple of the city’s tourist trade. These days, in order to get a table in the famous Palm Court, you had to book at least three months in advance. At more than forty pounds a head, it wasn’t cheap either, but it was
an event
.

Today, as always, both mother and son were determined to get their money’s worth. For Carlyle, that meant seeing how many French Fancies and cupcakes he could devour in just forty-five minutes (his record was nine). For his mother, it meant savouring her brief escape from the city outside. Amidst the over-the-top Louis XVI style decor – where Winston Churchill, Charles de Gaulle, Charlie Chaplin and Evelyn Waugh had all sipped and nibbled before them – it was hard to imagine that London was still going about its never-ending business outside.

For Carlyle too, the ritual offered a rare chance to escape from the real world. As such, it was not a place to discuss serious family business. Today, however, he knew from his mother’s firm tone – her Scottish accent still clearly detectable after all the decades in sensible exile – that she definitely wanted to talk about something serious.

Being a policeman, dealing with ‘serious’ issues was Carlyle’s job. Disasters were a daily occurrence, but they were a purely professional rather than a personal concern. Anything closer to home was primarily his wife’s concern. Carlyle would meet his domestic responsibilities, but only from the back seat. Wasn’t that what most men did? Whatever, that was the way things worked in his family. He liked it that way. And he wanted to keep it that way for as long as possible.

What could his mother want to talk about? He could only assume that there was something wrong with his old man’s health. And why not? His dad was only human. Carlyle double-checked the maths in his head. His parents were both in their seventies now. Life expectancy in the UK was around seventy-eight for a man and eighty-two for a woman. They were getting old.

Obviously, the clock was ticking louder and louder for both of them, but Carlyle wanted to ignore it for as long as possible. Apart from anything else, he wasn’t sure how well he would rise to the occasion. If nothing else, John Carlyle was aware of his own limitations, or rather his own selfishness. He was already responsible for a wife and child. He had his own life to lead, just as his parents had lived theirs.

By and large, Lorna Gordon (she had never abandoned her maiden name) and Alexander John Carlyle had been blessed with good health and an extended period of active retirement. That was all anyone could ask for, was it not? Now, however, it was clear that these golden years would soon be coming to an end, in all likelihood to be replaced with something rather grim.

Carlyle thought back to the last time he had set eyes on his father. They had been to see a Fulham game at Craven Cottage a few weeks earlier – an entertaining 0-0 draw with Spurs – and he recalled the older man struggling up the steps of the Johnny Haynes Stand. At one point, his dad had slipped, falling awkwardly, and Carlyle had to lift him up. It was clear that his father had become less agile over recent years, but he was far from being an invalid. They were still very much father and son, so it was not something that either of them had been prepared to discuss further.

How bad would it get, though? His mind had started galloping ahead now and nothing could stop it. Would his father need to go into a home? His mother was by no means frail, but acting as a carer was extremely tough going, even for someone much younger. And then there would be the emotional strain . . .

He sneaked a glance at his mother as she poured some more tea into her cup. Something would have to give, sooner or later. Maybe something had given already. Would he himself have noticed? Quite possibly not.

His mind now in overdrive, Carlyle desperately wished that his wife was here. Helen was so much better at handling this type of situation than he was. Unlike him, she wasn’t thinking about herself all the time.

An incredibly fat woman wearing a floral print dress lowered herself into a chair at a nearby table. Carlyle idly wondered if it would be able to support her weight. Grabbing a menu from the waiter, she devoured its contents with ravenous eyes. You should get your stomach stapled, he thought nastily.

Tearing his gaze away from the human whale, he scanned the room, suddenly conscious of the hum of conversation as tourists and day-trippers up from the Home Counties struggled to make themselves heard over the clink of cutlery against fine bone china. At least the surrounding noise meant that he could slurp his Jasmine tea without causing offence. Raising his cup towards his lips, he took a sip and looked over the rim expectantly, waiting for his mother to continue with her chosen topic of conversation.

Taking a modest bite from her smoked salmon sandwich, Lorna looked at him with sharp blue eyes. They were rather watery nowadays, but they still showed the steely determination that had taken the young Ms Gordon from the Fife backwater of Kirkcaldy to post-war Glasgow and, with her new husband in tow, on to London by the time she was barely eighteen. They had settled in Fulham, where she had become a schoolteacher while he had taken on a variety of jobs, some more menial than others. Their only son had been born there and grown up to become a policeman. A commendable family, committed to honest endeavour, they had modestly prospered for more than half a century.

Something to be proud of
.

‘Yes?’ Carlyle forced himself to meet his mother’s gaze.

‘Your father and I,’ she said, with only the slightest of tremors evident in her voice, ‘are getting a divorce.’

Almost falling off his chair, Carlyle stared at her in absolute astonishment. Tea dribbled down his shirt and on to his lap. A waiter in bow-tie and waistcoat appeared by the table to offer him a napkin. Feeling flustered, he took it and waved the man away.

His mother watched impassively, finishing her sandwich as he mopped himself up.

‘What do you mean,’ he asked finally, dropping the tea-stained napkin on the table, his appetite well and truly gone, ‘you’re getting a divorce?’