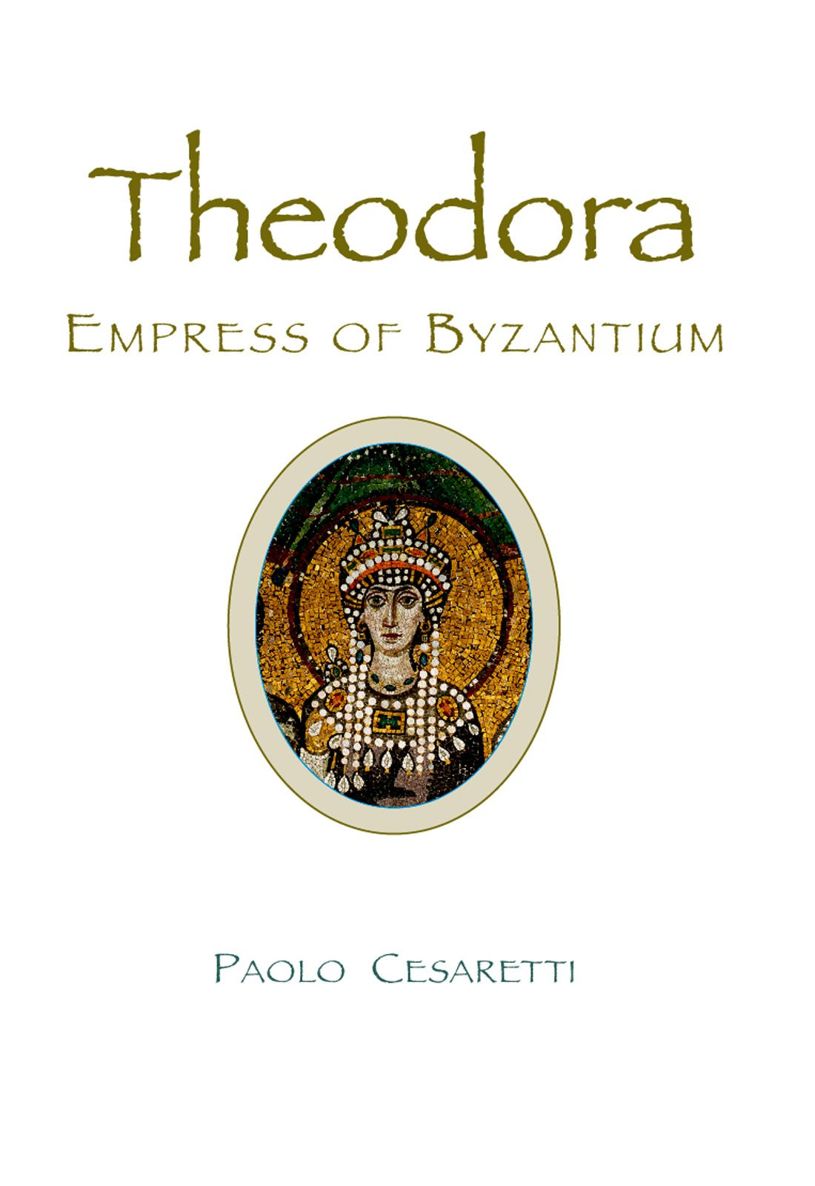 First published in the United States of America by

All rights reserved. No part of the contents of this book may be reproduced

without written permission of the publisher.

Theodora : empress of Byzantium / Paolo Cesaretti ; translated from the Italian by

The translation of this book has been funded by
SEPS
.

ONE
: “Keeper of the Bears”

TWO
: “He Removed These Persons from That Office. … They Conferred This Position … upon Them”

THREE
: “As Each One Seemed to Her to Be Ripe for This Calling”

FOUR
: “She Immediately Became Admired for This Sort of Thing”

FIVE
: “Contriver of Shameless Deeds Above All Others”

SIX
: “She Was at a Loss for the Necessities of Life”

ELEVEN
: “Royalty Is a Good Burial-Shroud”

TWELVE
: “The Victories That Heaven Has Granted Us”

THIRTEEN
: “Our Most Pious Consort Given Us by God”

FIFTEEN
: “Solomon, I Have Conquered You!”

SIXTEEN
: “God … Entrusted These Lands to the Demons of Violence”

SEVENTEEN
: “Loyal to Her Family”

EIGHTEEN
: “Her Next Stage”

The original Italian version of this volume was published in the autumn of 2001, before I read Clive Foss’s article about Theodora published in 2002. In addition, James Allan Evans’s book on Theodora,
The Empress Theodora: Partner of Justinian,
promises to add significantly to the literature on this important historical figure. My text would certainly have benefited from my having read these works, but I don’t think I would have changed my basic concept, which is reflected in this edition: I have tried to build a real narrative out of the facts of this great woman’s life and give the story a certain rhythm. This element of artifice is ultimately the most important part of any biographer’s work (as Hans-Georg Beck, the great scholar of Theodora and Procopius, has noted). Because the same few sources are (almost) all used by every one of her biographers—mute sources that leave themselves open to all sorts of interpretations—I have sifted through and reorganized them into something new. A friend of mine described the result of this effort as “not a fictionalized biography but a biographical novel.” I like the expression and I hereby adopt it.

I am deeply grateful to Vendome Press and particularly to Mark Magowan for being interested in my book in the first place, and for his great care in producing the best English edition possible. I have Rosanna Giammanco to thank for translating the text, and Abigail Asher for her editing: I cannot praise her enough for her patience with knotty Italian word problems, and for her rigorous treatment of the
Greek and Latin terms I used in the original edition, and which, when appropriate, are used here.

Thanks to Peter Garlid, Emanuela Canali, and Isabel Venero, who all helped to bring this edition into being. The editions in English and Greek (the chief language spoken by Theodora and Procopius) were both subsidized by grants from the European Secretariat for Scientific Publications in Bologna (Segretariato Europeo per le Pubblicazioni Scientifiche, or SEPS). I’m happy, of course, about the grants for personal reasons, but I’m even more gratified by their cultural significance: this biography, with its interpretation of the sources and its various literary devices, is considered to have its roots in “science.” My thanks to Chiara Segafredo on behalf of all her colleagues at
SEPS
.

With each reprint of the original Italian edition, and each publication of foreign editions, information and facts are updated or modified to reflect local differences or new information uncovered by recent research, but the intent and the basic structure of the work remains the same. I emphasize this to introduce my readers to the idea of the divergent interpretations of the texts used to study Theodora: these issues are relevant here because they have always influenced the image of Theodora provided by historians and other writers. So what is the real “truth” about Theodora? That’s a question that cannot be tackled in this foreword—that is part of our story.