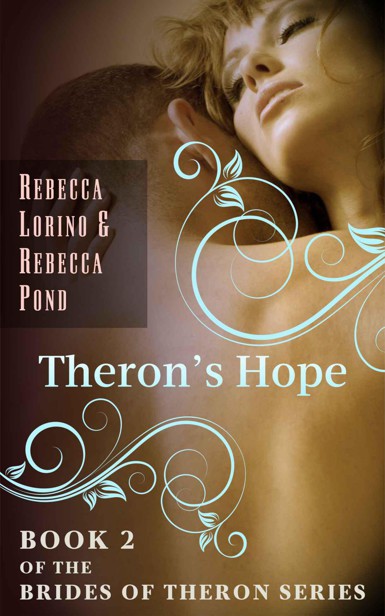 The characters and events portrayed in this book are fictitious or are used fictitiously.  Any similarity to real persons, living or dead, is purely coincidental and not intended by the author.

For my husband and soul mate Dominic who always inspires me and who gave me the two most wonderful children, Gianna and Jacob.

For
my sister-in-law, Rebecca Pond, thank you my Twin!

In the beginning, God created Adam.  He was alright being alone, busy with the task of naming all of God’s creatures and creations in the Garden of Eden.  When all of his tasks were complete, Adam began to feel very lonely.  God recognized his need for a companion, someone with whom to share his life, and one night as Adam slept God took a piece of Adam’s body and created Eve.  She was literally his other half, his soul mate.

What if this is God’s gift to us all?  What if there really is one person intended for each of us?  Could we find them?  Would our paths lead us to them and what would happen if we took the wrong path?  Would we get another chance?  Would we automatically know when we found one another?  What if half of our soul had to travel extreme distances in space through the vast universe to find his other half?

It is my opinion that the concepts of love at first sight and soul mates exist.  I was lucky to have found mine early.  I knew it the moment we made eye contact that we were meant to be together forever.  With him I am complete.

Gracie picked up her cell phone, selected a contact and pressed speaker.  Sitting on the bed zipping up her boots, she waited until she heard the rough voice of her editor.

"Hi Marv, this is Grace Abernathy.  I am just checking to see if you have received the research report and copy submission for the latest story you assigned me.  If you did not get the chance to read it yet, I hate to break it to you that I don't think there is much to go on.  This woman you sent me to look for can't be found.  At over a hundred years old, she is likely dead for all we know."

"Yeah, I got that from the research report.  You did a very nice job outlining her assets and the current speculative theories of her whereabouts.  I agree with you about it being a hard story to sell.  I think I am going to pull you off from pursuing this story any further.   We will print it as a research piece.  Are you ready for another assignment?"

"Actually, Marv, I was thinking about taking a nice long vacation.  I have some property that needs my attention and I need to check in with the firm.  I will contact you when I am ready to write again."

"You know, you could always take my offer to do the broadcast news.  You could stay in New York all the time and let others do the research. You are a great looking gal, and I could use you there.  You are far too pretty to be hiding behind the scenes."

"Actually, it is the hiding that I prefer.  You know that I don't like to draw too much attention to myself.   I would never be able to have a private moment in public again if I were to be on TV and actually be as successful at it as you imagine I would be.  I like my life the way it is."

"So you keep telling me.  Just keep my offer in mind in case you change it."

"I doubt that my opinion will change, but I will keep it in mind.  Marv, I have to let you go.  I am about to catch the red eye to New York."

"Have a safe trip, and don't be away too long Grace.  Goodbye."

She hung up the phone and finished stashing away the final items into her travel case.  She was not looking forward to the late night flight.  Her cousin Michael was dealing with a crisis at the firm and called her to an emergency board meeting.  The partners probably could have handled the matter themselves, but Grace made sure that since the firm was called Abernathy and Associates, she still held a vested interest in the direction the firm was headed.  Not to mention, she preferred having the chance to review the cases and clients that they chose to represent, ensuring they were maintaining the standards of integrity set by her late father.

At 5 foot 10, Grace was a tall beauty.   She had shoulder length auburn hair with a slight wave and large almond shaped emerald green eyes.  She was curvy in all the right places and she was always dressed in the latest fashions.  She worked out at least three times a week and she would rock the designer clothes she wore.  She also knew how to be invisible if she wanted.  It was amazing what ill fitting clothes and a pair of out of style glasses could do to make people ignore her.  It was this ability that helped her most in her ability to gather information and not be noticed.  However, sometimes when there was a guy standing in the way of her obtaining the information she needed, her looks granted her access to many a juicy story.

She was an adventurer and traveled all the time, usually planning some sort of exciting activity while on assignment.  From sky diving to white water rapids she made sure that she considered some fun journey during every trip.   She had friends on every continent, but was not very adept at maintaining relationships with them.  She called this a consequence of her upbringing and possibly her job choice.  Being a writer she was never in one place for a long period time.  Why should she be?  She could write anywhere.  Always looking for the next story, she was jet setting to a new locale constantly.

She was born to a family of "old" wealth in New York.  She went to one of the best boarding schools in the country because her parents weren't used to having children around and were too busy with the family business and the social engagements that were required of them to be involved in the day to day upbringing.  They generally left the child rearing task to the governess and numerous nannies that they employed until the kids were shipped off to boarding school for most of the year. This particular situation was not by choice but practice.  It was how all the Abernathy ancestors raised their children.  Similarly from the time she was born, the youngest of three, she was destined to practice law in the family firm.

The family firm handled many of the most prominant clientele in the country.  Her father was carefully selective in the cases he took and he won every case he defended.  She was prepared and committed to accept this life until 9/11 took out her family.  She was 16 years old and away at school when the planes hit the buildings of the World Trade Center reducing it to rubble causing her family to perish at the hand of terrorists.

She never saw her immediate family again.  Her mother, father, older sister and brother were gone.   Her life went on as usual with the only notable difference being her Aunt and Uncle were in charge of her finances and important decisions regarding her care until the age of 21.  She decided to go to university in New York City and live in the penthouse on 5
th
Avenue which was her parents’ former primary residence.  She enrolled in Columbia University majoring in pre-law to appease her Grandmamma Agatha.

To deal with her own suffering caused by 9/11 she kept a journal and wrote various stories depicting her grief.  She wrote a story about the loss of her family and the resulting pain caused by the terrorist’s actions.  When she published her first story in the New York Times, she knew that research journalism was what she wanted to focus on and changed her major.  Her grandmother objected to her choice of career and made it known that she did not approve, insinuating that she was a traitor to her family business interests.  However, the popularity of her stories made her realize that maybe she should spend her life writing about her experiences and doing the thing she loved best, helping people and making a difference.  She was always looking for a story that made her an advocate.  She would help those people who experienced injustices in their lives at the hands of others.

In her profession, she was a master of discovery and getting the story down to all its dirty little secrets.   Her philosophy was to find the story, research it to oblivion, and write all the facts.  She got better with more experience and she noticed that her editor was starting to assign her the stories that most reporters would fight for. When asked by Michael, she would take the occasional research job for the firm on the side.

In reality, she did not have to work, she just didn't know how not to.  Her money was family money that was built upon the generations of lawyers and judges from Europe to the first colonial days in the brand new United States up to the present.  When her parents died she inherited all their possessions and a vast number of properties.  She was also the sole beneficiary of the large insurance policies her parents had taken out before their untimely deaths. After 9/11 she was the only remaining immediate inheritable family of her mother and father’s wealth.  When Grace died, unless of course she had children of her own, there was no one else to leave it all to.