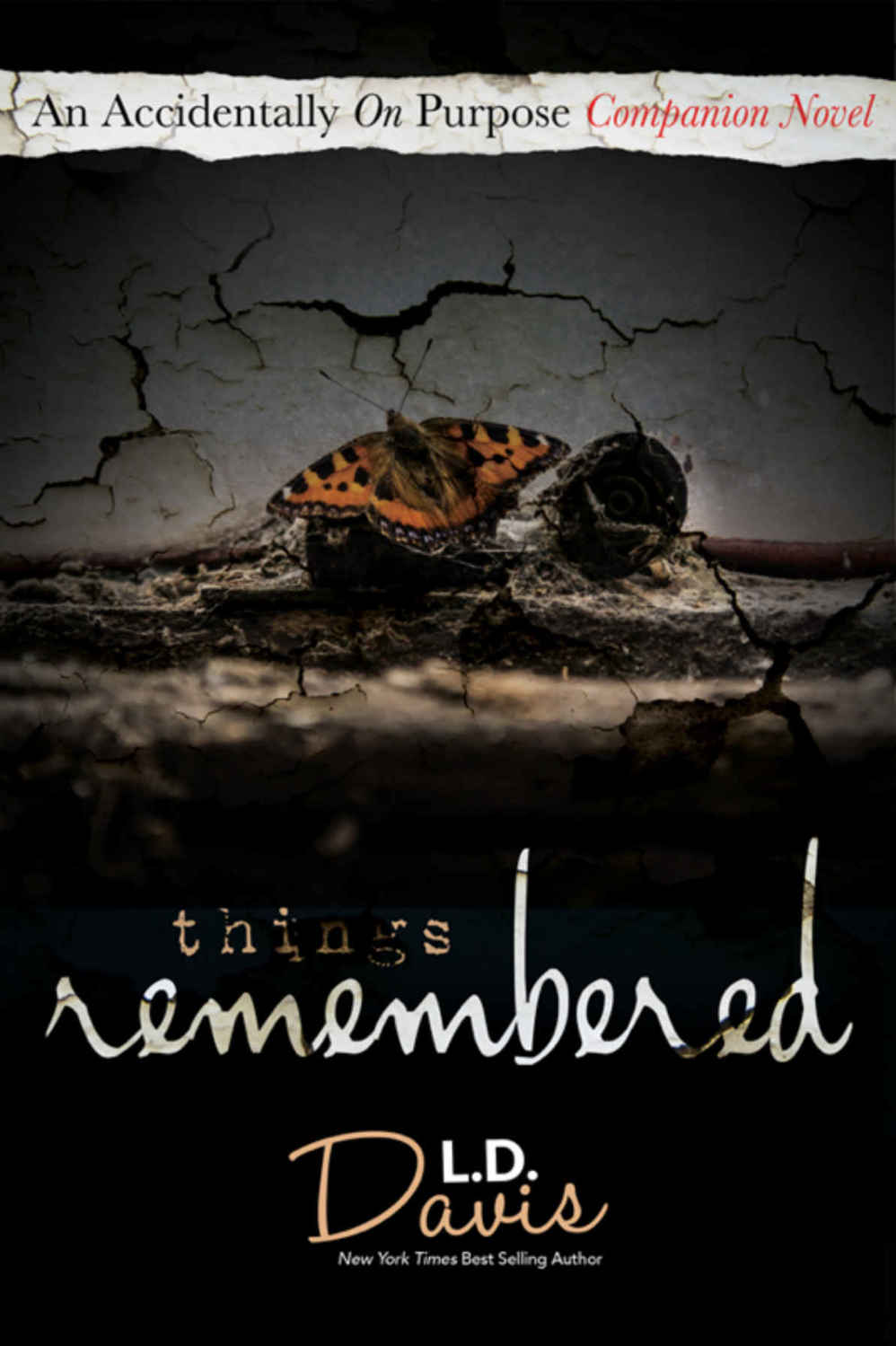 An Accidentally On Purpose

This eBook is licensed for your personal enjoyment only. This eBook may not be re-sold or given away to other people. If you would like to share this book with another person, please purchase an additional copy for each recipient. If you’re reading this book and did not purchase it, or it was not purchased for your use only, then please purchase your own copy. Thank you for respecting the hard work of this author.

This book is a work of fiction. All names, characters, and situations are entirely a result of the author's over active imagination. Any resemblance to persons living or deceased is coincidental or used fictitiously. No part of this novel may be reproduced without written permission from the author.

Memory is a fickle thing. How do you know if what you remember is true or false? Must someone validate every thought of the past to make it real? What if our recollections differ? Then who is to say what is truth and what is fiction? What if there is no validation? What if you are haunted by memories without knowing how solid they truly are? The truth is not always what we think we know. Sometimes, the truth is not always the things we remember.

Typically, only foul weather and sickness were reasons for interference. I could usually cope with that because it wasn’t like I could control the damn weather, but when it was a person that got in the way, I turned into a monster. Scratch that. I
reverted
to a monster.

I had just exited the coffee shop I went to every morning when someone on the street called my name. I stopped in the middle of the sidewalk, pissing off some commuters in the process, and did a complete three-sixty in search of the person who had called me. I didn’t see one face I recognized, other than the same faces of strangers I saw every day on my way to work.

“Mayson Grayne,” the masculine voice said without any doubt about who I was.

I looked to my right just as a man stepped out of the crowd and stopped a foot away from me. He stared at me as if I had just fallen out of the sky. I stared back with an open mouth as familiarity clicked into place.

Some people don’t age well, but some look better with age. The man that stood in front of me was an example of the latter. In most respects, he looked very much the same. His skin still looked like smooth, deep chocolate. His brown eyes seemed to carry the weight of life in them, but they were still basically the same eyes I had peered into millions of times.

The short-trimmed beard was a new addition since he was almost always clean shaven when I used to know him. His hair was also a little different, cut neat and close to his head. He was nearly a foot taller than me. I used to have to stand on my toes just for my lips to graze his jaw.

The biggest difference, I couldn’t help but notice, was his body. He had always been in good shape, but the body in front of me was in better than “good” shape. It was the body of a
man
, not of a young guy still growing into his.

He looked at me appraisingly head to toe and then back again. “You look amazing.”

I blinked away my astonishment as a sudden surge of anger made me squeeze my coffee cup so hard it was in danger of being crushed in my hand.

The bitterness rolled off my tongue easily. “Not bad for a girl that you expected to be dead by now.”

“I am very glad to see that you aren’t dead,” he said solemnly.

“If you actually gave a damn about me not dying, you would have checked in every once in a while to confirm that I was still alive.” I began to turn away but stopped suddenly and gestured angrily at him with the hand holding my bagged pastry. “You were right about one thing, though. I didn’t need you. I didn’t need you then and I don’t need you now.”

I turned my back to him and continued on my way to work as I felt his eyes burning into my back. I ignored the trembling of my hands and my erratic heartbeat.

I made it to work a few minutes later than my usual, which made a world of difference. The elevators were more crowded, so it took me a few minutes longer to get to my floor with all the stops along the way.

One of the reasons I made concerted efforts to get into my office early was so that I didn’t have to encounter the group I called The Mommies. It was a group of about six women who clustered together to discuss their dried up breast milk and clumsy toddlers and such. They
loved
to catch me and force cell phone pictures of their stupid kids in my face. Since I was the Personnel Manager, I very well couldn’t tell The Mommies to fuck off. Not at all. I had to indulge them and comment on how well their kids were growing and make them feel good about themselves by telling them that their ugly-as-sin children were beautiful.

I didn’t have anything against kids, not really. My cousins’ kids were like my nieces and nephews and I loved them dearly, but I didn’t care much for other peoples’ children. I thought they were weird, that they smelled funny, and were life suckers. They sucked the life and fun out of everything around them with their sticky hands, whiny crying, and their constant need for attention. Kids weren’t for me, and The Mommies didn’t get that. They always wanted to know when I was going to settle down and have a few offspring of my own.

I wanted to tell them that I’d settle down in my grave when I was dead, but I was pretty sure that wouldn’t have gone over well. So, I smiled and did all the formalities and always just barely escaped with my life.

After getting stuck with The Mommies, I was nearly twenty minutes later than my usual time by the time I made it to my office. When I finally settled down in my chair and turned on the small radio, I realized that I had missed my favorite segment of the morning radio show I listened to every morning. Not that I would have heard a damn thing they said with
his
voice still echoing in my head.

When I took my first sip of coffee, I was extremely dissatisfied to find it lukewarm at best, instead of the steamy hot temperature I enjoyed. I couldn’t reheat it because it just didn’t taste the same afterward, and I couldn’t eat my pastry because the pastry and the coffee went hand in hand.

I was ready to flip my desk over and trash my office. That damn man threw off my whole day. It was scarcely eight-thirty in the morning and my entire day was already misaligned. Nothing would go right for the rest of the day. Life was going to be that much harder because I couldn’t enjoy a few minutes with my coffee and chocolate croissant.

Most people that had a rough day got over it with a drink or a chat with a loved one, or just slept it off. It meant something entirely different for me. Even after years of being clean, my first inclination when my day was shoddy was to get high. Yes, I realize how ridiculous it may seem to you that a lukewarm coffee and an unappetizing donut could cause such strife, but it wasn’t so much about me being a picky eater as it was about control. Having a modicum of control over something that may seem so insignificant to you was a huge deal for me. Look at how fast my morning spun out of control, how quickly my personal time was taken away from me.

Regardless of how disgruntled I was, however, I had to swallow it down and pretend that all was well in my world. There were meetings to attend, decisions to be made, paperwork to be done, and a plethora of people depending on me. I had to smile and pretend that everything was all right, even though I felt a loss of control inside.

I made it through most of my day without snapping, but
that man
kept bobbing around my mind like a man-buoy.

There were many holes and fog in my memory from years of doing drugs. Over the years, I had managed to nudge him from my everyday thoughts until he was almost as good as those missing and abridged memories. However, he’d played a part in one of the memories I could not eradicate.

The dead girl. Lying on her back, staring up at the ceiling with sightless eyes. As paramedics repeatedly ask me questions, I only see the dead girl and the young man weeping over her body. He looks up at me then. He meets my eyes just before I am carried away.

They were his eyes, the eyes of the man I saw on the street outside the coffee shop.

The eyes of one Grant Alexander.

The Medici Conspiracy by Peter Watson
The Book of Mouse: A Celebration of Walt Disney's Mickey Mouse by Jim Korkis
The Late Blossoming of Frankie Green by Laura Kemp
Kiss at Your Own Risk by Stephanie Rowe
Antes bruja que muerta by Kim Harrison
Vice by Jane Feather
Brigid Lucy and the Princess Tower by Leonie Norrington
Frostbitten by Becca Jameson
Out of the Dark (Forbidden Love) by JAMES, DANIELLE
A Thousand Acres: A Novel by Jane Smiley