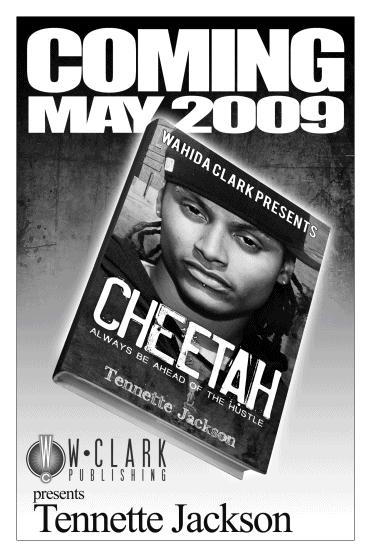 A novel by
MIKE SANDERS

Copyright 2008 © by Mike Sanders.
All rights reserved. This book, or parts thereof, may not be reproduced in any form without permission.

This book is dedicated to someone whom I love totally and unconditionally. The one person who pushed me into pouring all of my blood, sweat, and tears into this novel and making it come together. Thank you SOOOOOO much!!! So without further ado, I would like to dedicate this book to MY DAMN SELF!! Yeah, I said it!!

First and foremost I would like to thank the Most High for all things imaginable!
Mikai, LeCrecia, and Skylar, words can’t begin to describe the way I feel about my princesses. Thanks for your unconditional love! Daddy is finally home and it is ON!!!
My caring and loving family, without your support and encouragement I would have crashed a long time ago. Thanks for throwing me a life line when I was drowning!
No, I’m not going to waste neither my energy nor my acknowledgment space naming all of you who shit on me in my time of need because you know who you are. If you’re not sure if I’m talking about YOU just speak to me and see what type of reaction you get.
Kinya, it’s only right that you get your shine because you have been pivotal in this process and a true “friend.” Although you, too, at one point turned your back, it’s still love! Thanks for continuing to be there when I needed you most.
To those who showed love when I came home (Corey, Barry, Rez, Dirt, Big Will, Sum, and Big B. the Guyanese) I really appreciate it. I see that real people really do real things! That’s what’s up!!
To all of my readers across the nation, thanks for your support! Here’s another banger for you! Can’t wait to meet all of you on tour very soon!!
Thanks to all of the book clubs that read
Hustlin’ Backwards
and
Snitch
and posted reviews. Ms.Toni from OOSA, good lookin’ for everything. I really appreciate it.
To everyone on lock, keep ya heads to the sky!! Change is gonna come soon!!!
Thanks to everyone at WCP! Wahida, Tobias, Hadiya, Keisha, and everyone who contributed to getting
Thirsty
into print. This is only the beginning!!
You can get at me at: [email protected], myspace/ queencitysbest and wclarkpublishing.com.

s I nervously climbed those winding stairs with my baby .380 clutched tightly in my sweaty palms, I could feel beads of sweat trickling down between my breasts. With each step I climbed, my heart beat like jungle drums and felt as if it would leap from my chest at any given moment. Regardless, I knew I had to still my nerves, but I also knew there was no turning back! I’d decided that
today
would be the day I’d make this nigga pay for all of the pain and anguish he’d put me through.

As I neared the door to his home office I could hear the familiar melodious sound of his money counting machine as it rhythmically spit out bill after bill. I was hoping that I’d rocked him to sleep during our time together so he’d be totally oblivious to what I was about to do. I was also hoping that he’d gotten so comfortable as to have left the door unlocked. He knew I had never disturbed him while he was in this room handling his business because I knew a man needed his space from time to time. But today,
his
space was about to become
mine
as well.

When I was directly in front of the large, oak door I stood there and silently prayed my nerves would allow me to carry out my task. Hell, it’s not everyday a sistahh’s about to catch a damn
body
!

A million and one emotions began to well up in me all at once. So suddenly, that it felt as if they were colliding and toppling over one another. I tried with all the restraint I could muster up to hold back the tears, which were fighting to be released, but it was to no avail. My eyes lost the battle and the water sprang free. Mascara streaked down my chiseled cheekbones as the tears flowed freely.

Just the thought of how easily the man beyond this door had come into my life and turned it upside down, made me really grasp the concept of what could happen when a man catches you at a vulnerable stage. I witnessed first hand how a woman’s mind can really get twisted.

After taking a deep, nervous breath I reached for the cold knob and was thoroughly surprised to find it
unlocked.
I paused for a moment to muster up the courage I needed. With a trembling hand, I twisted the brass knob and hurriedly pushed the heavy door open just in time witness this nigga’s eyes almost pop out of their sockets as he looked up from his desk where he sat.

“Justice,” he called out my name while staring in astonishment as I stood there in his doorway brandishing a pistol, looking like a crazed woman.

CHAPTER ONE
How It All Began…

ocated downtown on South Summit Avenue was club Nine Three Five, and everybody who was somebody was up in the house tonight. Charlotte’s hottest nightclub was off the hook for its first annual “Grown & Sexy White Party.” All patrons were dressed immaculately from head to toe in all white. From a distance it looked angelic. It was showtime for real. Dope boys competing with the celebrities and the girls competing with each other.

DJ Incognito was pumping the latest Mary J. Blige hit. The sound of the bass invaded my soul as I sat slightly swaying my hips on the barstool and observing the packed mirrored dance floor. The whole while I was keeping a close eye on the VIP.

Carolina Panthers’ Julius Peppers held down the VIP section with several of his teammates along with a few members of the Charlotte Bobcats basketball team. Panthers’ star wide receiver Steve Smith was celebrating his birthday and champagne was flowing like it was mere tap water. Security was thick like Obama himself was trying to get a drink. But that didn’t stop the hundreds of groupies from begging for VIP wristbands and trying to get in. Charlotte’s most elite nightclub was packed to capacity and it was a wonder that the fire marshals hadn’t yet come and tried to shut things down.

It is a known fact that whenever the ballers came out to party, so does the “baller chasers.” Needless to say, every chick who thought they had what it took to snag one of those niggas was hovering around the club in the skimpiest outfit they could squeeze into, lurking like vultures waiting for the kill.

Money attracts women, so for every one male there were at least three women and the men were taking complete advantage of the three to one ratio. Most of the men were well groomed and looked as if they had just stepped out of the barber’s chair. But there were a few who looked like they had just finished going ten rounds with Mike Tyson. Most of these niggas were hustlers whose chips were not stacked as high as the ball players, yet and still, together they flossed enough ice to build a three-family igloo.

My girl Sapphire and I were seated at one of the two bars on the first level of the club basking in the limelight. We were enjoying our drinks and grooving to the smooth sounds that were pouring from the sound system. I was in my zone and feeling hella good! Guys had been checkin’ for us all night, but Sapphire and I were unfazed by all of the attention we had been receiving. One by one, we had been shooting niggas down left and right. But that didn’t deter a few who were still relentlessly determined to holla. Evidently, quite a few seemingly assumed they had what the next man didn’t because even well into the night they were still approaching.

We hadn’t been out in quite some time so we were truly letting it all hang out tonight. Being the object of most men’s desire was nothing new to us. We were accustomed to stealing away most of the other chicks’ spotlights wherever we went. This night was no different.

Sapphire and I were what most people would refer to as
mysteries
because no one really knew a whole lot about us. Men
loved
us because they couldn’t have us at the drop of a hat like most other chicks, and women
hated
us because they couldn’t figure us out. The hate never really bothered us because we were aware of the fact that it is human nature for us to fear and oftentimes hate what we don’t understand. For that reason, our circle always stayed as tight as a nun’s pussy. Besides the two of us, we didn’t have any female friends because bitches are just
too
jealous.

As I swiveled around on my stool to face the bar I was startled by a presence that had sidled his way between me and Sapphire. Evidently, this nigga had spoken to me while I was checking out the VIP, but I hadn’t heard a word he’d said.

“What!? I can’t hear you,” I shouted over the loud music to, yet, another brother whom had invaded me and my girl’s space for what seemed like the umpteenth time since our arrival at the club. This one definitely had
no
chance whatsoever. His face was decorated with the kind of pimples I hadn’t seen since junior high school and his so-called dreads were so matted up they looked like a throw rug. The instant deal breaker was his dental work. He was displaying my ultimate turn-off— platinum teeth! I hate to see metal in a grown man’s mouth.