Read This Time Next Year Online 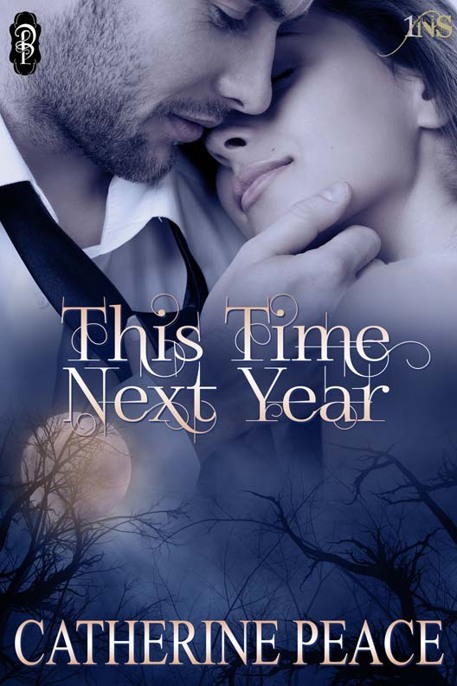 Home to Hellas by Stephanie Beck

Escape to My Arms by Heather Thurmeier

One Night with the Bride by Sara Daniel

The Midnight Masquerade by Monica Corwin

The Perfect Sub by Jayson Locke

The Governess and the Beast by Karyn Gerrard

A Marine Affair by Heather Long

Remember Me by Amaleen Ison

Dom of the Dead by Virginia Nelson

Heart of Rock by Karyn Gerrard

Marine in the Wind by Heather Long

To my multiple support networks who never let me give up when I’d given up on myself, and to my parents for sharing my successes and failures
.

Moira tried not to scream.

Her voice cut through the otherwise silent house. Embarrassed and fighting tears, she leaned back into the comfort of her pillows. She hated waking Tandy, but as usual, the dream seemed so…real. Shivering, she jerked her favorite blanket up to her neck—the one she’d kept since that horrible night, as though the thin, tattered fabric would shield her from the fangs that attacked her every time she closed her eyes—and waited for her best friend to knock on the door.
Three, two
….

Two quick raps on the door signaled her arrival. The woman had reliable timing.

“Get in here.” In the time it took her to blink, Tandy joined her on the side of the bed, wrapped her arms around her and drawn her close. “Are you okay, sugarplum?”

She chuckled at the nickname. Tee knew how to calm her, even when they were children, knowing what to say, what to do, to keep her mind out of the darkness. When she was in the room, the fangs seemed duller, the flashing red eyes less terrifying.

With a grateful smile, Moira lowered the blanket from her neck. “Yeah.” She sagged into the pillow. “I’m so sorry. Again.”

It was, except it wasn’t. She’d memorized the dream, like a movie one had seen way too many times, but tonight something had changed. The paralyzing fear remained. The blood-colored eyes and cruel smile still appeared. Her younger self still cried and the wind still licked at her face. This time, though, a second set of eyes and another set of fangs joined the first; they didn’t evoke the same fear.

“Sort of.”
Twenty years, and I’m still dreaming about this
.

“I saw another vamp. He might have been protecting me.” The idea went against everything she believed, but at the same time, it rang true.

Only Tandy knew about the vampire attack that had left her orphaned. They’d been in the same foster home…at least until Moira’s nightmares started scaring the other kids, and the adults. When the Dufresnes asked the agency to find the ‘troubled kid’ a new home, Tee refused to stay without her. And thank God for that.

“How did I get so lucky to have you?”

“Luck’s got nothing to do with it. Want some tea?”

Moira nodded and followed her into the kitchen. “I can’t believe I’m still going through this. I mean, I’m a scientist. Logic. Order. Tests. Results. Concrete evidence. This whole dream thing…has none of that.”

The same argument she’d used every morning when she woke the same way. Grabbing the tea kettle, Tee made the usual affirming, placating noises. “You know what’d really help you?”

She took a seat at the bar and watched her bestie work, first filling the kettle and placing it on the stove. Slim and long-limbed, Albany’s favorite rising artist oozed grace and fluidity as she moved across the room. Meanwhile, Moira stood five-foot-three on a good day, had the grace of a drunk crocodile, and all the fluidity of a glacier, plus all the color of one, too.

Those words snapped her back to reality. Blood shot to her cheeks. She stared at the words on her favorite mug:
Fuck me, I’m Irish
. How long had it been? “You know that’s not an option.”

“Why the hell not? A one-night stand worked wonders for Alene. You’re getting laid, not married.”

Wide-eyed, Moira didn’t bother to stifle a laugh. Alene Crawford, the uptight Georgia transplant they’d met through mutual friends, the one who’d often looked down on Tandy for her ‘extracurricular activities’ had had a one-night stand? “Alene?
Our
Alene? Why didn’t I know about this?”

Shrugging, Tee plopped a teabag into each mug. Moira inhaled, catching the rich scent of lemon. Her favorite. “Probably because you’ve been in your own little world for hell and ever. You need to get out of that biochem lab more, girl. She went through this service called 1Night Stand. Said it was the best thing she ever did.”

“A one-night stand? Alene?” she repeated.

“Yup. She’s been seeing this guy for a while now.” Tandy glanced up. “You seriously did not know this?”

“I seriously did not.”

“Well, then I guess it’s good we had this conversation.” She added a bottle of vodka to the mismatched, yet fitting, tea service. “Cuz I kind of signed you up.”

“You what?” The teabag tumbled back into the mug, her jaw practically along with it. Her body burned. What kind of friend would go behind her back like that? “I just said—”

“I know what you said, but we’ve been friends for how long? I’ve learned to read between the lines. You need to get laid, woman. Have some guy worship at the fountain of Moira for a night.”

“The fountain of Moi…are you
insane
? What if the guy’s a serial killer or something?”
Or a vampire?

With her hand on her hip and eyebrow cocked, aka the ‘don’t you know anything’ look, Tandy took a deep breath as the kettle whistled. “Madame Eve takes care of her clients. You think I’d suggest it if she was going to set you up with Dexter…or Dracula?”

That bastard made Dracula look like Richard Simmons
. “Whatever. I’m not doing it.”

After pouring the cups full with damnable precision, Tandy sat next to her.

Moira waited for her tea to steep before adding a healthy shot of vodka.

Tandy added, “You might change your mind after you see your match.”

Kiernan Shaw gaped at the computer screen. Madame Evangeline had accomplished in a matter of months what he’d spent years failing to do—finding the girl with the red bouncy curls, the girl whose life his master ruined to ‘teach’ him how to be a true vampire.

“Madame, you’re either a jinn or a goddess,” he muttered.

The girl had grown into a beauty. Her hair still as untamed as he remembered, and freckles still dotted her cheeks like constellations. But in the photo, her face had lost its roundness, replaced with high cheekbones, a small nose, and full lips. She’d grown into a petite and curvy, beguiling, sexy woman. On paper, she was a normal twenty-six-year-old.

According to her profile, she’d graduated with honors from Princeton, worked in a biochemistry lab studying new methods to combat different addictions, receiving numerous accolades for her research. All well and good, but what about her emotional state? The memory of Willem’s fangs ripping her mother open tore through his mind, as fresh as the day it happened.

He’d watched and still hated himself for it. What had that night done to her? In Kiernan’s experience, scarred children grew into scarred adults.

But he’d refused to let Willem hurt her, instead comforting the girl while she cried, shielding her from the monster he’d been forced to call ‘Master.’ Even then, he wanted her forever. Her blood sang to him, and his still sang for her. Maybe this time, she would hear the music. Maybe he’d even learn her name, if she would tell him. He hadn’t spoken to her since that night, and all he’d said then was, “I’ll keep you safe.”

True to his word, he’d checked on her whenever he could, keeping his distance so as not to alarm her. From the other side of the street, he would keep vigil until sunrise, listening for her soft breaths and heartbeat, doing anything he could to ensure her safety. But after her last move out of state, and without a name, he’d lost her. Worst of all, he’d lost the chance to atone.

The following night, he could make amends, and he would make it the most romantic night of her life.

The knock on the suite door startled him. It couldn’t be her. The email had said nine pm, and the grandfather clock had just struck seven. Fighting against the need to drop his fangs, Kiernan opened the door to the cheerful attendant on the other side, a slight girl of maybe twenty who held a bottle of pinot grigio and two wine glasses in her hands.

“Perfect. Thank you.” He took the bottle and examined it, inwardly chuckling at the Castillo logo on the label. Whiskey had been his drink of choice during his human years, so he knew nothing of wine. It would do, he supposed. At least it wasn’t red, the one color he refused to allow in the room. The hotel had gone to great lengths to remove all traces of the color from the suite. They’d never understand his gratitude for their accommodation.

“The roses should be here any time, sir,” the girl said. “Would you like me to call you when they arrive, or have them sent up?”

“Sent up, if you please.” He couldn’t wait to see the lavender beauties that would flank each side of the door and hoped his ‘date’ would love them.

“Certainly, sir. Anything else I can help you with?”

The girl’s bright smile stirred a different kind of desire—the desire for her blood. The synthetic blood he depended on kept him alive; it didn’t provide him with warmth and color like fresh. His stomach burned with the thought of taking the attendant and getting just a taste, but he hid his urge behind a forced smile. “That will be all. My thanks for your help, miss.”

“My pleasure.” She turned on her heel and walked back to the elevator.

Kiernan stared at the wine bottle in his hands, as another round of second thoughts invaded his frazzled mind. Did she even like wine? Did she prefer beer? In the end, little things made or broke an encounter, and he couldn’t afford a mistake. Everything had to be
right
. Perfect. Nothing short of perfection would help him atone for his numerous sins.

In the corner, the clock’s monotonous ticking sliced through the otherwise silent room, perking his ears with each second it counted off. Another second he wouldn’t age. Another second where thirst clawed the back of his throat like an angry wolverine.

She’d be there in two hours, and he still had plenty to do before she arrived.