Read Those That Wake 02: What We Become Online

Those That Wake 02: What We Become 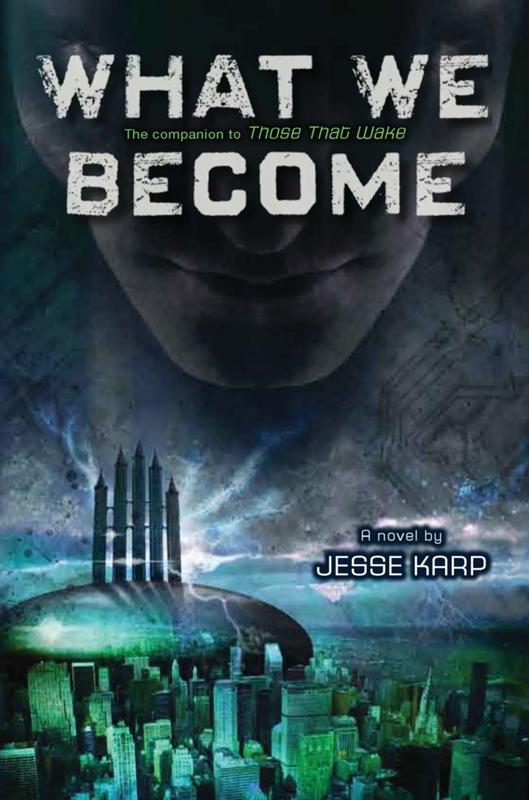 Fight for the Future

What we become / Jesse Karp.

Sequel to: Those that wake.

Summary: Two years after destroying a corporate empire intent on controlling human thinking through technology, teenagers Mal and Laura engage in another battle to save humanity when a “corporate bogeyman” known only as the Old Man tries to gain absolute power.

my teacher, my fighter,

The important thing is this: to be able at any moment to sacrifice what we are for what we could become.

A FIST JACKHAMMERED INTO MAL’S
face and smashed his head into a brick wall. Thunder cracked through his skull, and when he groped his way back to awareness, he realized that his eyes were still open but he couldn’t see. What he primarily couldn’t see were the two large men in tight dark suits, a bright sheen over their eyes from the steroids that swelled their muscles and the performance enhancers that quickened their reaction times.

Mal dropped, assuming another blow was coming toward his head, opened his mouth to let the blood stream out of it. Something hard in his mouth almost lodged in his throat as he sucked in air: a tooth. A knee buried itself hard in his gut. He coughed out, blood and his tooth spraying out into the air. An arm around his throat straightened him out. Pain rang through his body, flooding all other sensation, but he realized he had thrown a punch himself when he felt hard impact against his fist, the vibration up his arm.

“Son of a
bitch!
” one of them snarled. The one holding his throat from behind used a free hand to pound into Mal’s kidney.

He gagged, coughed more blood, probably spraying the one in front of him. The smudge that was his vision began to sparkle, shapes began finding their way back into Mal’s rattled brain.

The blows from behind stopped. An arm locked Mal at both elbows, so he stomped down behind him, caught an instep. The man grunted, jerked back. Mal spun on him, a dark silhouette in Mal’s injured vision.

The man’s arms flashed up in three expert blocks, parrying each of Mal’s flurried strikes.

“Are you kidding me?” The other’s voice preceded a kick in the crotch, which brought Mal to his knees again and left no air to power his limbs, to get him back up. The sidewalk, clean and textured, appeared in alternating waves of dimness and light.

Hands on his arms, his legs kicked out from beneath him, Mal’s knees scraped the concrete, tearing his pants. The bright city formed around him, spinning. Sound rushed back in, traffic mostly. People walked by as he was hauled toward the big dark limo parked ten feet away. The people looked down at their cells, or their eyes were invisible behind black plastic cellenses, a man shouting red-faced at an employee, a young woman crying in racking sobs to her apathetic boyfriend, all of them trapped in the output of their technology, like insects mired in honey. Once, Mal would have thought they were trying to ignore the unpleasantness. Now he believed they simply didn’t notice.

The door of the limo was opened before him. He tensed to push back, but they felt it. One punched him in the neck. Choking, more blood, less air. They stuffed him inside, onto the spacious floor. One climbed on top of him, knees in his back, forearms resting on his neck, Mal’s face pressed to the floor mats. A door slammed, the limo began to move.

“This is him?” a woman’s voice asked.

“Of course, Ms. Kliest,” one of the suits said, not the one on top of Mal. It was a tight, clipped voice, showing no insult at the affront to his professionalism that the question implied.

“How can you tell with all the blood?”

“He wasn’t bleeding when we saw him, ma’am,” the other one said, the one pressing down on Mal. His voice was heavier, angrier.

“I know, Mr. Castillo. What I’m saying is, did you have to beat him so badly?”

“He’s tough, ma’am.” Castillo’s heavy voice leaped to his own defense. “We had to put him down. He got a few good ones in, anyway.”

There was a cold silence.

“Well”—the woman’s tone suggested a possible thaw—“is he conscious? Is he alive?”

“Turn his head this way.”

The pressure on Mal’s neck eased; his head was jerked around. He resisted on principle, and the other man had to get in on it. Finally, with Castillo still on his back and neck, while the other kneeled on his head to trap it in place, Mal faced the liquid-black gloss of a pair of high-heeled shoes.

Nevertheless, she bent low, and Mal felt fingers pry one of his eyelids wide. For an instant, there was the woman’s face, coolly exquisite, high cheekbones, blond hair pulled tightly back, the slim line of dark cellenses covering her eyes.

“Oh, for God’s sake”—she glared into his eye—“you’ve given him a concussion.”

She released Mal, sat back up, breathed out a heavy sigh.

“Mal Jericho,” she said too loudly. “Do you understand me?”

He closed his eyes, let his tongue probe through the blood to the place where his tooth had been. They hadn’t simply knocked it loose but actually cracked it off. He could feel the jagged root protruding from his gum into the empty space between the teeth on either side.

Fingers snapped—one, two, three times—right in front of his face. He wearily opened his eyes.

“Listen, boy,” she said. “You’d better let this penetrate, because your life literally depends on it.” He believed her. “There are forces in this world that make things run, that determine the direction of human life.” This he knew. Better than he liked. “The weather, for instance; the geographic distribution of natural resources. And there are certain individuals—individuals who sit on invisible thrones and preside over cultures, governments, societies. An audience with such an individual is more precious than a field of oil wells or a cavern shot full of gold ore. Today you will be privileged with such an audience. Do you understand what I’ve just said to you? Answer, or I’m going to kick you in the face.”

He closed his eyes again. If she had just let the question stand, he would have answered her, but with the threat attached, he would not. A moment later her kick jarred through his spinning head, anchoring it briefly with a spike of pain, before sending him swirling down a whirlpool of nausea and disorientation.

“People kill their own families, sell their own lives, to be in the same room with such a person,” she said reasonably. “And what do you do? You really ought to be ashamed. Bind him, Mr. Roarke.”

The weight on his back shifted, hands moved onto his arms. He pulled away, felt Castillo’s knee press down on his kidneys. While he coughed out blood and bile, Roarke bound his wrists behind his back with something thin enough to cut the flesh. Mal pulled at it, anyway, but found it utterly unyielding, though his palms and fingers became slick with blood.

The limo slowed, bumped down a ramp, pulled to a stop. The door opened, the woman got out, then the men rearranged themselves, gripped him under the armpits, and pulled. He gave them dead weight, but with the benefit of fifth-generation performance enhancers coursing through their bloodstreams, they struggled him out into a moist, echoing space. He opened his eyes briefly, but the fluorescent light from above cut into his brain like a razor. For a brief instant before he clamped his eyes closed again, he saw a huge parking garage with low ceilings, completely empty but for the limo; at its center, where they stood—where Mal hung from his wardens—was a column with a bank of elevators.

Elevator doors slid open. They dragged him in, the doors closed, the elevator moved upward. Mal straightened suddenly, threw his head to the left where a face must be, judging by the grip on his arm. He connected, and on impact, his knees buckled, he vomited, and his head blasted out of existence.

“
Christ!
Do you believe this little bastard?”

Castillo’s irate voice jarred Mal awake. He might have been lying down on the floor, his face in his own vomit. Maybe. All his sensations were vague and far away now, except the light cutting through his closed eyelids, driving spikes into his brain. He squeezed his eyes shut tighter.

“He head-butts me with a
concussion!
You’ve got to be kidding.”

Roarke was silent. The vague sense of motion stopped. Mal felt himself lifted by his shoulder again, pulled out. He kept his eyes shut. More light, he thought, might kill his brain.

“Clean him up,” the woman said, her voice receding. “Then bring him in.”

They dragged him, laid him on something soft. Water ran, something wet swabbed at his face, none too gently. As the rough passage crossed his jaw, where his tooth had been cracked, the sensation became briefly sharper. The cleaning went on for a minute, over his hands and arms.

“What about his clothes?” Castillo asked.

“So, we’re supposed to clean him.”

“She didn’t say give him a shower and send his things out to the laundry, Castillo.”

“Screw you, Roarke. I’m trying to do what she said.” The wet cloth rubbed halfheartedly at Mal’s shirt, his pants, then gave up.

They lifted him, dragged him. A door slid open like a whisper, and they lowered him into a soft seat.

“Let’s try again,” she said. “My name is Arielle Kliest. I’m employed by the Old Man.”

Ridiculous. The Old Man was a ghost story they told on the streets.

“He’s quite real,” she said, having seen a flutter of muscles in Mal’s face or having simply read his mind. She didn’t have an accent, exactly, but her enunciation was so cleanly sculpted, she didn’t sound American. “And he’s in the next room. I’m not in the habit of murdering children, despite what it may seem like to you. I’m not in the
habit
of it, but I
will
do it. So listen very carefully. You listen to his questions. You answer his questions. You leave. Nothing else.”